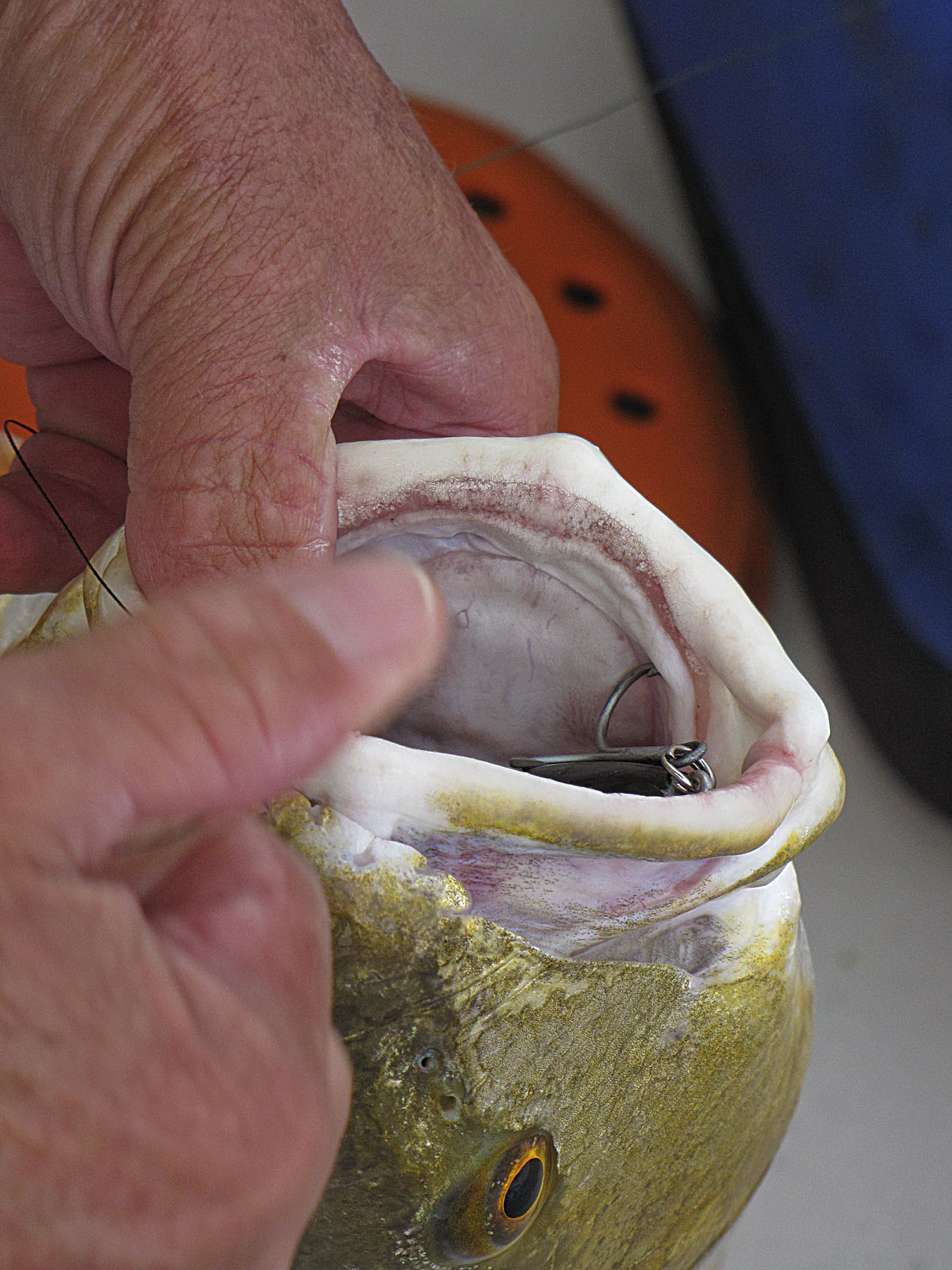 Somewhere in there is a topwater plug!
As I eased the truck forward up the launch ramp I noticed a blur of motion in the rearview mirror. A cat squirrel disguised as a fisherman with Costa Del Mar sunglasses and visor was racing about the deck readying all the requisite tackle and gear. I parked the truck and trailer and then waited patiently on the dock until the deck of his ultra-cool Hell's Bay Waterman was arranged exactly as he likes it before stepping aboard. My partner for the day and the one responsible for the immaculate appearance of the boat was none other than my good friend Captain James Trimble, or as most folks know him Cap'n Trim.

Trim has been severely bitten by the shallow water bug and it has infected his entire world to say the least. The guy is an extremely talented and accomplished fisherman in just about any depth of water under any set of circumstances, but chasing fish in the skinny stuff is a new and challenging concept that he has fallen deeply in love with. His enthusiasm for the sport and this style of fishing is how we became friends and it's what makes our days on the water fishing together that much better.

Our trip goal was to find fish for an upcoming tournament that Trim and his partner were entered to fish. First order of business was to formulate a game plan based on a few factors. First were weather conditions, especially wind. Since we were in Trim's skiff, the thought of tackling Sabine Lake's open water in high winds was nowhere on the day's "to do" list. Calm mornings meant running as far south as possible and fishing our way back in order to have the wind and seas in our favor as the day developed. I know each of us has a go-to weather source whether it be on the web, TV or radio, and mine is www.weatherunderground.com. I live and die with their wind predictions. According to the website the wind was due to kick up pretty strong around noon so we opted for a big run at daylight and it worked perfectly.

Our first stretch of water found us trying to locate fish with lures that would allow covering large spaces of water. Topwater plugs, spoons, and spinnerbaits are all perfect for this task. Once a fish or two was caught, we then began a more refined approach. Deciphering the pattern and then establishing which lure would offer the best odds of consistently catching those fish was the next goal. I have to admit that I am guilty of being reluctant to change from topwaters, even when conditions and results say I could be catching more fish, but the thrill of surface strikes are just way more fun. I know I could catch more fish more consistently on weightless soft plastics or spoons but these simply do not light me up the way a floater does. Guilty as charged.

The first redfish of the day took a mighty swipe at the MirrOlure She Pup floater I was throwing and missed the first time only to come back and finish the job. It was not long before we had another tournament class fish fall for the same plug. Both fish were solid seven pounders and that proved to be a great start. A short trip down the same shoreline produced another quality fish from almost the same type of structure and thus a pattern was starting to form. After a few pictures and a nice release it was my turn to man the push pole and let Trim take the casting platform. Spending a day on the water with another guide is a really nice change of pace, a type of "holiday" that only comes around every now and again. It's always enjoyable to share a boat with another person who has the same interests as you and this makes the day that much better.

It wasn't long before Trim had his first redfish on and doing it's best to test his drag. At this point we decided we had found a viable pattern and area that would give them a good starting point so we were now free to explore some other options. Now is when we were glad that we had run so far south earlier that morning because the wind was beginning to howl from the southeast. The small skiff hugged the bank and we remained surprisingly dry all the way to the next stop. It was here that we began to cull out bad water for additional scouting trips Trim was hoping to make later in the week. Finding and eliminating non-productive areas are just as important in the scouting plan as finding good ones. By being able to concentrate on "good" water and not worrying constantly over other areas that might produce, the angler can relax and fish an area more thoroughly and with greater confidence. By having a good game plan and sticking to it, a team maximizes their fishing time in a given day. Time spent running and looking on tournament day translates into failure most of the time. There will always be that time someone stumbles up on some fish that they had not seen or found previously but those cases are usually rare. The anglers that scout with a purpose and are well prepared will usually come out on top in the long run.

After probing a few more locations we were basically at the mercy of the wind and decided to look at one more place that was as out of the wind as we could find. We turned the skiff and allowed the wind to push us along as we made long casts along a shallow flat. It didn't take long for an oversized redfish to punish Trim's plug and take off for parts unknown. The healthy ten pounder finally came to the boat after an extended battle. All we could do was laugh as we looked at how far down the fish's throat the topwater plug was lodged, it was absolutely inhaled. Fortunately enough we were able to free the plug and release the fish unharmed to fight another day. A fitting way to end an exceptional day on the water. Hopefully the lessons learned on this scouting mission will translate into a big check for Cap'n Trim and his partner come tournament time.