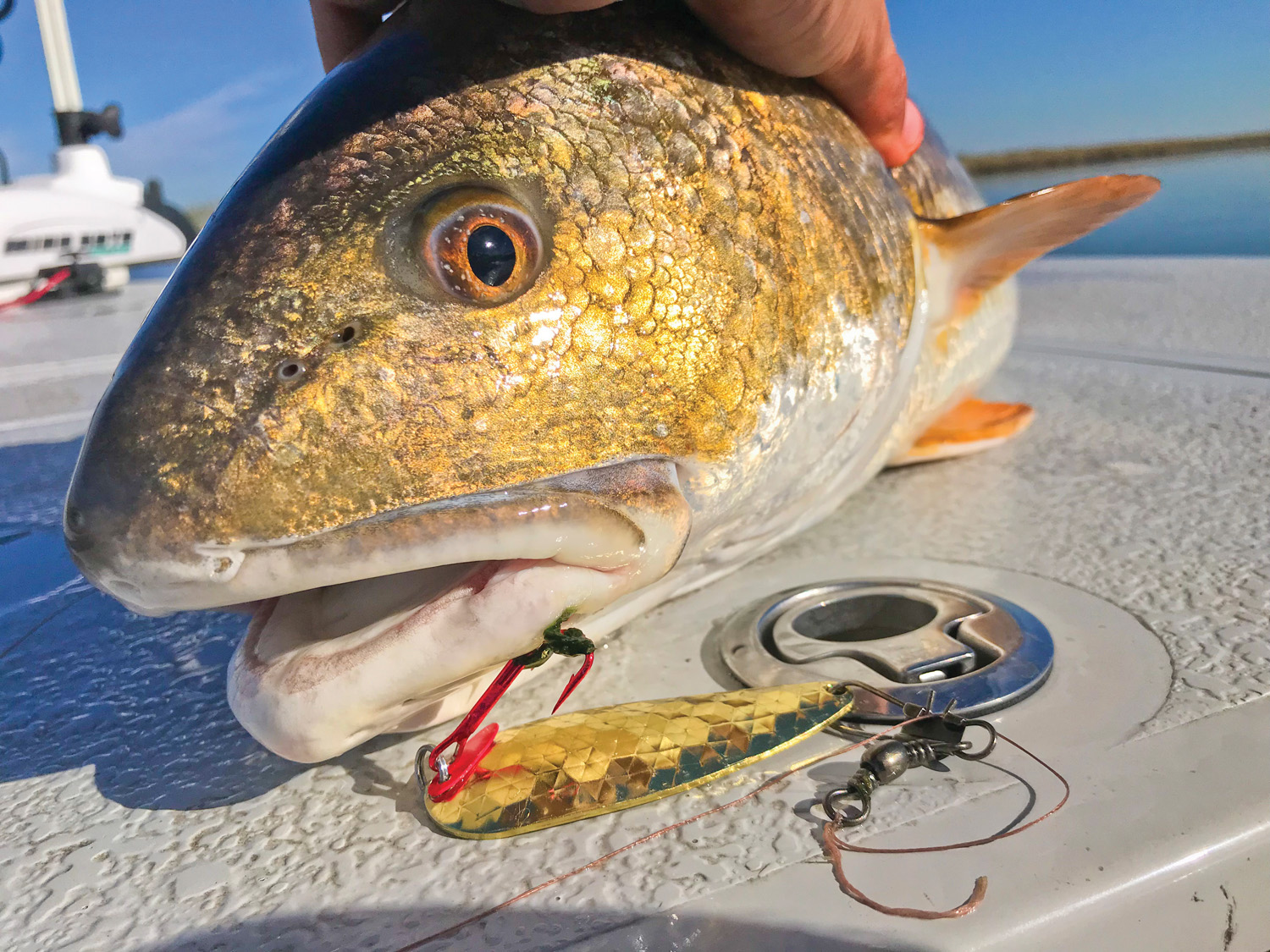 Definitely blue-collar class – redfish are built to eat and pull – and usually easy to please!

Strange, unprecedented and epic would all describe how 2017 played out for fishermen on Sabine Lake. As the famed Greek thinker and philosopher Socrates put it, “I know enough to know that I know nothing,” would pretty much sum up my year on the water. Virtually every program I hang my hat on included abnormal variations in some amount. The incredible swings in weather and water conditions forced fishermen to make changes and adapt on an almost daily basis. Throughout the craziness and uncertainty, the one solid and constant ingredient to the entire scenario was that redfish were always available. Floods, cold, extreme high or ultra-low tides made no difference to the redfish as they quickly became not only the savior of many trips but regained some much-needed respect and popularity among local and visiting anglers alike.

It's no secret that speckled trout steal the thunder in the fall and winter months on most bay systems and Sabine is no different. The standard late-summer and fall patterns almost always center around speckled trout as huge numbers of these fish begin to school and provide easy targets for anglers. Big trout begin to prowl the shallow flats and anglers seeking the biggest fish of a lifetime become consumed with locating and catching them. Redfish get kicked to the cellar while this is going on.

November brings the flounder run as the flatfish exit the marshes and bays, heading toward the gulf where they spawn. Again, the redfish get shoved out of the limelight. Later, in the dead of winter, big trout again take center stage as every angler brave or crazy enough to fish wretched weather conditions become badly afflicted with big trout fever. And, you guessed it, redfish get shunned. All that was normal until 2017, when trout got scarce and suddenly the redfish became the belle of the ball.

When it comes to redfish there really are very few secrets – only blunt and honest truth. The redfish is the blue collar, lunchbox-toting workhorse of the bay that lacks the glamour to be recognized on the same level as their speckled cousins and delectable southern flounder.

Redfish are not subtle and very little they do could be considered delicate, they’re just a bunch of copper-hued brutes built to eat and pull. One of my favorite descriptions of redfish came from Doug Pike when he was writing for the Houston Chronicle outdoors section. A mythical tale of an 8-pound redfish and 8-pound largemouth bass, tied tail-to-tail in a tug of war. During the struggle the redfish pulled so hard it turned the bass inside out, and then turned around and ate it. As you might expect, the hate mail from the B.A.S.S. guys flowed like a river but, in the end, they really knew the fictional story was pretty close to the truth. Very few, if any, fish in the bay can stand up pound for pound against the power of a red. Period.

Enough accolades, let’s talk results. Due to the extreme nature of the conditions on Sabine Lake this year, the speckled trout really never got going for any reasonable period of time. Hurricane Harvey virtually destroyed the much-anticipated fall run on speckled trout as 50-inches of rainfall inundated Sabine to the point where largemouth bass were being caught on a regular basis in Sabine Lake, which is almost totally unheard of. Folks who were chasing trout found them on the extreme south end and around the jetties for short periods while anglers on the north end couldn’t buy a bite. Every now and again, trout would show up and there would be a flurry, but it seemed to never last very long. All the while, day after day, the redfish just kept showing up and eating anything you cared to toss at them. It really didn’t matter where you were either, out in the open lake or in one of the many bayous that fed the lake, the redfish were there. Knowing that it didn’t matter if the wind might blow you off the open water, that there was protected water nearby with plenty of fish was like having a big fluffy safety blanket. Many anglers began to embrace the fact that trout were on hiatus and eventually turned their attention toward targeting redfish and enjoying some of the most phenomenal fishing you could imagine.

Perhaps one of the greatest highlights of this extraordinary run was the daily predictability of mid-lake schooling activity. As close to clockwork as you could imagine, from lunch time until dark-thirty, acres of redfish just destroyed every baitfish and shrimp in sight. The super calm conditions and clear water made for a visual feast as the feeding explosions, sheer size of the schools, and average size of the fish was nearly unimaginable. For a time, a few tight-lipped anglers kept it to themselves. Soon enough though, word got out and the traffic in that area of the lake increased exponentially. But, characteristic of the species, the reds just kept on doing their thing.

As the crowds grew around the schooling fish, others enjoyed extended stretches of the surrounding rivers and bayous void of traffic, and the results were just as impressive. Soft plastics and crankbaits fished parallel to the shorelines were absolute money as herds of redfish seemed to patrol nearly every stretch of bank. This program was about as foolproof as it gets because wind and crowds were no issue, there was plenty of shoreline as well as redfish to go around. Before too long chasing trout became almost an afterthought as local anglers embraced the predictable pattern that had been established for weeks. The numbers of redfish and their willingness to eat just about anything made up for the lack of speckled trout in many angler’s estimations. The second half of 2017 will most certainly be remembered for the ridiculously good redfish action and not the lack of speckled trout.

As we enter 2018, many anglers will once again shun the redfish in their search for big trout the next few months. The allure of trophies and opportunity to enter the 30-inch 10-pound club will be more than most can resist. I completely understand this and cannot blame anyone. The shockwave that ripples through the fishing community when word of giant trout begins to circulate is simply more than diehard salts can tolerate, even during these harsh weather months. Each strike is met with high expectations of the fish of a lifetime on the other end of the line. Sometimes that result is exactly what the angler hopes for and a huge trout comes to hand. Other times the strike produces a redfish that pulls just as hard but is rarely greeted with such celebration. The double standard is somewhat comical, and expected, as the focus on redfish immediately leaves once the trout show back up. At least for a few months the redfish was the star of the show and earned some respect before slipping back into virtual anonymity while waiting for another chance to step forward and carry the load.