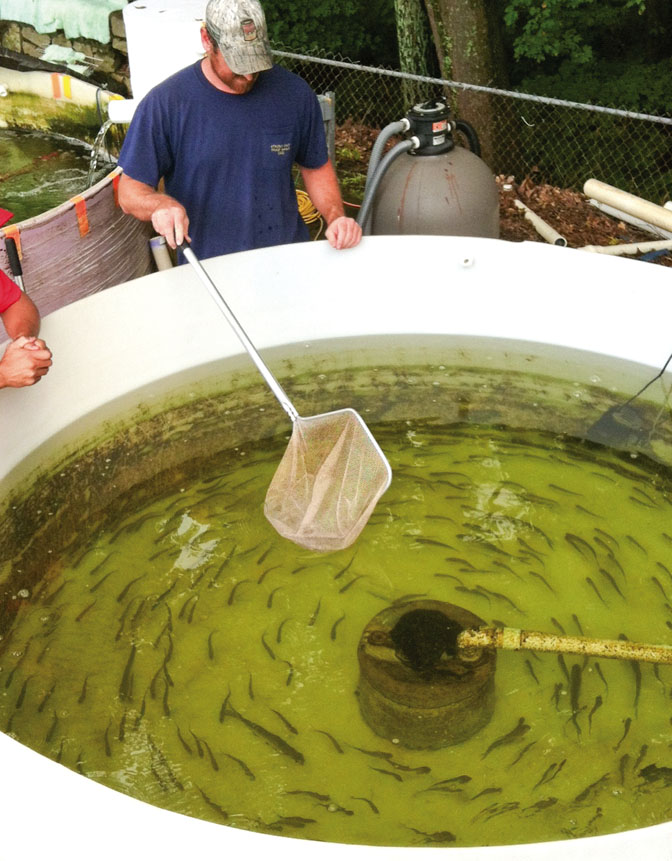 Notoriously difficult to maintain in healthy condition, the tanks at Striper Soup were flush with frisky shad of several sizes and species.
Like a scene from a movie where the main character sits in a self-help clinic; I am here to profess a weakness. "Hi, my name is Chuck and I like to eat fish."

Those words, eat fish, are rapidly fading from sport fishing vocabularies nowadays, almost to the point that you can instantly read the disdain in some fishermen's eyes if you even dare mention filleting your catch. So much emphasis is placed on catch and release and conservation in general that in some circles, especially among internet game wardens and other self-appointed ethics police, a fisherman is almost made to feel guilty for keeping a mess of fish for dinner.

This is relatively new in the saltwater world but the exact situation arose in the freshwater community several decades ago. Folks who dared keep largemouth bass were vilified, especially if any of them weighed more than four pounds. Well, those anglers figured out a better way to keep some fillets for dinner without facing ridicule and scorn; they began to target species like crappie and all the world approved. Now is the time for saltwater anglers to take a page from this playbook, avoiding the conservation hassle, and still putting some fresh fish in the grease.

Here on Sabine we are very fortunate to have many different types of fishing available. Anglers can choose from a wide variety of water and areas to fish and even target both salt and fresh water species in close proximity to one another. During the summer months a particularly popular method involves fishing the Sabine or Neches Rivers and the Intracoastal Canal. As the hottest summer weather patterns take hold, rain gets pretty scarce unless a tropical storm pays a visit to our shores, and the freshwater flow down the rivers begins to subside. As this flow grows weaker the heavier saltwater will begin to wedge its way upstream, carrying with it all sorts of saltwater species. Speckled trout, redfish, and flounder that are normally in these areas in some amount will become more plentiful and with them will appear everything from jacks to sharks. When this happens it's like Christmas for the folks who fish banks or from small boats because instead of having to go to the fish, the fish have now come to them.

Some of the more popular species that take up residence in the deeper water at this time also offer anglers an opportunity to bring home plenty of fresh fillets. Croaker and sand trout are perhaps the most abundant and also favorites on the list of table fare. These are what I call "saltwater sac-a-lait" sac-a-lait being a French term for crappie and sometimes panfish in general, used fairly commonly in Louisiana.

Finding these fish is not difficult; main points in the rivers or along the dropoffs that are usually marked by crab traps are excellent places to start. A standard bottom rig or Carolina rig will more than do the trick when baited with fresh shrimp or shad. The sand trout tend hang out a little deeper than the croaker and with a little exploration they can usually be found quickly. One tip to pass along is that when you find these fish in good concentrations, it pays to switch baits from shrimp or shad to squid. The squid has a much tougher texture and will stay on your hook longer, which is a bonus when you start getting bit on every cast. Using squid will save you lots of time and effort between fish by allowing you to keep a bait in the water longer.

Many local anglers will take advantage of the easy bite from these "saltwater panfish" if it happens, although many will still be looking for speckled trout and redfish to stretch their strings. Finding these fish in deeper water can be done with artificial lures like smaller swimbaits or Berkley's GULP! on a jig, but it's more often the live bait that produces the most consistent results.

Now live bait in the Sabine Lake is often tough to come by on a daily basis, so most anglers usually catch their own with a castnet. Finding and catching shad for bait is fairly easy, whereas keeping it alive for any length of time is another story. Most anglers run into problems shortly after they put their bait in the livewell and this can certainly be frustrating. There are ways to better maximize your bait in your livewell and I recently got schooled on the subject while on vacation in Acworth, Georgia, of all places.

Shawn McNew of Striper Soup Tackle Shop in Acworth, Georgia absolutely blew me away with his knowledge of shad and how to keep them alive for long periods of time. Founder and owner of Striper Soup, Shawn is also a dedicated striper and fishing guide, specializing in striper charters. Shawn graduated from the University of Tennessee with a degree in wildlife and fisheries science and put that knowledge to work as a guide and successful businessman who not only sells shad for bait, but transports shad for stocking purposes.

During my visit to Striper Soup, Shawn was kind enough to show me his bait tanks and setup for selling bait shad to local fishermen. The big tanks were flush with shad, each tank holding specific sizes and species; fingerling prices similar to that which Texas fishermen pay for live croaker. Larger shad are also available but the prices go right along with the size.

McNew's system of monitoring bait tank water quality takes many variables into account and special emphasis is placed on pH factor. According to McNew the biggest problem most folks run into when trying to keep shad in a baitwell is improper pH and the next biggest is putting too many shad in there in the first place. Not only does the pH go out of whack but ammonia contamination from their waste products is another sure killer.

He took the time to listen to me explain how my "shade tree" degree in biology has led to using frozen water in plastic bottles for cooling baitwell water and also the use of powdered additives to promote oxygenation. He related the problems I had been fighting back to pH, explaining that if you can keep the baitwell pH right, those shad will last far longer than you can imagine.

After many years of testing Shawn has developed a line of baitwell additives that aid in maintaining pH in the shad's preferred range and also a compound that eliminates foam buildup in the baitwell; both are available on the Striper Soup website. While you're viewing the baitwell products, be sure to check out the Shad CRACK, Shawn's trademarked product that is formulated to reduce stress in freshly caught shad or herring and greatly extends holding time. It contains a blend of salt and other ingredients, that when added to water, provides a more suitable environment in which these famously delicate bait species can be held in healthy condition for longer periods.

Back home on Sabine, I have done some comparison testing using side by side baitwells, one treated with Shad CRACK and the other without. Let me tell you, this stuff works! Knowing you can keep bait alive for the duration of a fishing trip or maybe even overnight sure beats the worry of running out and having to put the rods up while you locate and castnet another batch.

So with a new view on putting fish on the dinner table and an introduction to some very useful products for keeping bait alive, let's all enjoy a fun day on the water and a great meal when we get home. Fishing is a wonderful pastime, enjoyed by each fisherman in their own way, and as long as we remain good stewards of the resources we will always have great fishing. September's "saltwater sac-a-lait" should be enough to make everyone happy.