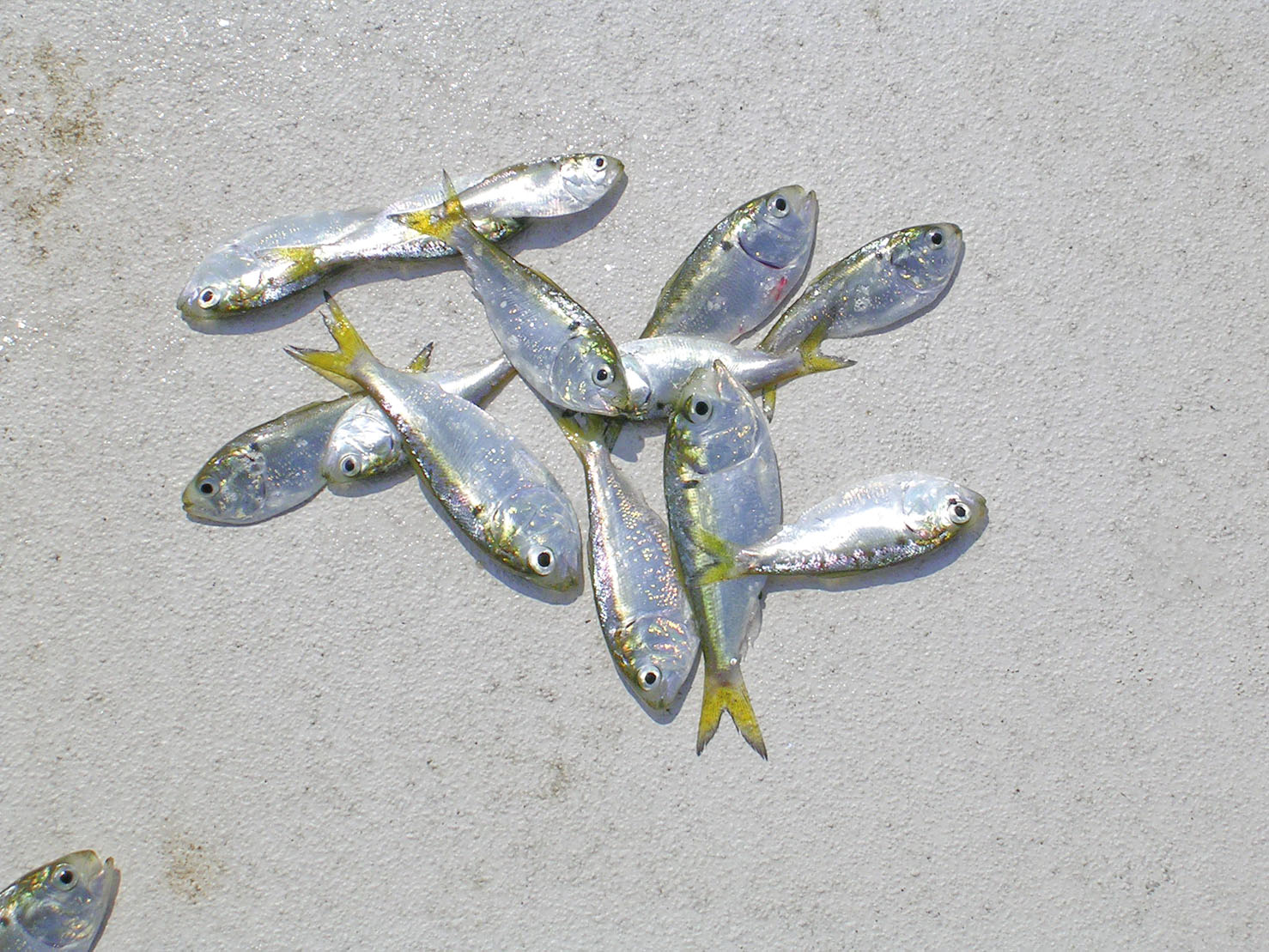 Shad of this size make dynamite flounder bait, larger would be better for black drum and cut bait sometimes seals the deal quicker.
If you were to take all the articles, reports, forecasts, and outdoor columns written this month in all the outdoor publications and put them together, you would more than likely come to the conclusion that it's a bad time to be either a speckled trout or largemouth bass. Seemingly the entire outdoor world has "trophy fish" on the brain and everyone has descended upon the shallow water in search of that one giant fish that puts the exclamation point on a fisherman's resume. Can't say as I blame anybody for wanting to catch a big fish, it's only natural. I mean, when was the last time you heard a fisherman brag about a small one? It's always been about tipping the scale and stretching the tape, and for Texas salts, the speckled trout exemplifies this perfectly. No other species garners as much ink or bandwidth in Texas and, no doubt, a veritable horde of anglers go ape for the one that will set the fishing community on it's ear or do they?

While the masses are steadily in pursuit of the newest super bait or hottest bay on the coast, there will be a few dedicated fishermen who turn the other way and, believe it or not, choose to fish for other species. "BLASPHEMY" - you say! Yes it's true; there are folks out there who choose to focus on fish other than speckled trout, even in the spring. Now before you drop your best rod and reel on the floor to cover your ears in disbelief; I'll give you a minute to settle down and offer a few examples of how the "other half" fishes.

Seatrout aside, I'd say the next biggest attraction this month for saltwater anglers has to be the spring flounder run. Hardcore flounder fishermen are about as technique oriented as anybody and twice as particular, especially when it comes to baits and presentations. Unlike the ridiculously good fall run where the flounder stack like cordwood in the passes, the spring run is different for sure. Expect a more gradual presence as these fish trickle back in from the Gulf and begin to scatter along the marshes and drains. Flounder are very structure oriented fish and depend greatly on ambushing prey rather than tracking it down. Returning flounder won't be roaming the flats slashing through schools of mullet like trout but they certainly are not locked in place either. A detailed understanding of the bottom and how currents work is a common theme among the hardcore flat fish chasers. A lot of these fishermen are very comparable to offshore fishermen, particularly the ones who hustle red snapper. Certain areas and structure types are like magnets drawing these fish to predictable locales year after year. Knowing how to position yourself accordingly is the key to success regardless whether you use live or artificial baits.

Boat control, getting into position without disturbing an area, is a factor that challenges flounder fishermen. Allowing your boat to drift into an area or using a trolling motor helps eliminate disturbance, and once there, anchoring systems such as Stake-Out Stik, Power Pole or Talon enables holding that position without the noise and inconvenience of a conventional anchor. The Stake-Out Stik in tandem with the Power Pole or Talon prevents the boat swinging on the anchor line which is especially important for anglers using live bait, less of a concern for those throwing lures who are probably trolling shorelines and probing structure continuously along the way. Both techniques are tried and proven methods for catching flounder from the boat in any bay system.

Lure choices for flounder tend to be more of a personal preference than a strictly dictated science and there are plenty of really good baits to pick from. My personal top choice would be anything with built-in action to create vibration, either paddle tail or grub style curly tail; I've had great success with both.

Live bait is another personal preference that has it's own set of factors, the biggest being availability. Unless you own a castnet and can throw it well, you are more than likely going to be at the mercy of the local bait shop. Finger mullet, mud minnows, shad or live shrimp will all work and work well. Dickie Colburn, a guy who has caught more flounder than I could begin to count and with a reputation for shooting straight says flounder like meat. There probably isn't much difference between a mullet and mud minnow so long as either is the right size.

Another overlooked and underappreciated fish that gets a little love in the spring is the black drum. Unlike its cousin, the red drum; black drum has been relegated to second-class status, somewhere "beneath" your average top-end angler. In all reality though, the black drum can hold its own if you'll give it a chance. It's a blue collar fighter that seldom disappoints when hooked or cooked. The spring is a fantastic time to target these fish, especially the really big ones that will more than test your tackle. In fact, if the whole truth were to be told, the biggest fish that many saltwater anglers have ever caught was a big black drum.

Several years ago I had some customers in my boat from Ohio and we couldn't get away from the black drum, I'm talking about some bona fide Muy Grandes. For whatever reason these giant fish were stacked up everywhere I had been catching redfish the day before and I couldn't figure it out. Regardless of my disgust at not being able to find a more glamorous species those folks from Ohio were having the time of their lives as nearly every cast resulted in a 15 minute fight with a 20-plus pounder. At one point we had four rods bowed and no fish was smaller than 30 pounds. It was a rodeo to say the least and everybody was happy. It's almost magic how a big fish will change the whole complexion of a day on the water.

Black drum are like flounder in that they too prefer meat, dead or alive. Show them some fresh cracked crab and they'll go nuts. Deep holes or washouts in the rivers or channels are good places to locate them. The jetty systems are also ultra-prime locales to find the oversized drum in the spring. It's almost comical to see an angler hook up to a 30-40 pound fish and just have to follow it down the rocks dodging other fishermen until either the angler or the fish gets tired and gives up. Where the bigger fish excel in the fight department, they are way down on the low end of the scale as table fare. The smaller specimens, often referred to as puppy drum, are excellent table fare. Fried, grilled or baked, Pam Johnson (TSFMag's Cooking Editor) rates them alongside flounder and prefers black drum over red drum, hands down.

Speaking of desirability, there has been a recent groundswell of interest in black drum from fly fishermen. These fish offer a challenging target that requires pinpoint accuracy in order to entice a bite, since they rarely go out of their way to chase down a meal. Occasionally these fish stack up in the back lakes along with sheepshead and just drive fly fishermen mad. Black drum can be finicky as a permit without the pedigree. I knew a guide in Florida who really got a handle on catching them on fly but he wouldn't tell his clients why his flies worked so well. After a few rum and cokes one afternoon he finally came clean and admitted he tied the bodies of his drum flies around some scented strips similar to Berkley's Gulp. He couldn't tell his clients because they would be mortified to discover he had resorted to "cheating" with scented flies. I quickly told him, "This coonass don't care, as long as they bite," and we got along famously.

This spring you can open up a whole new world if you are willing to try something a little different and break away from the perceived norm that the masses indulge in. There are ample opportunities to chase much less pressured fish in areas that are easily accessible with techniques that are basic and easy. The potential to catch the biggest fish of your life on one cast and then one that will offer a great meal on the next is really a cool combination that too few anglers take advantage of. Just remember to respect your fellow anglers even if their style of fishing isn't your cup of tea - because we all enjoy the sport in our own way.