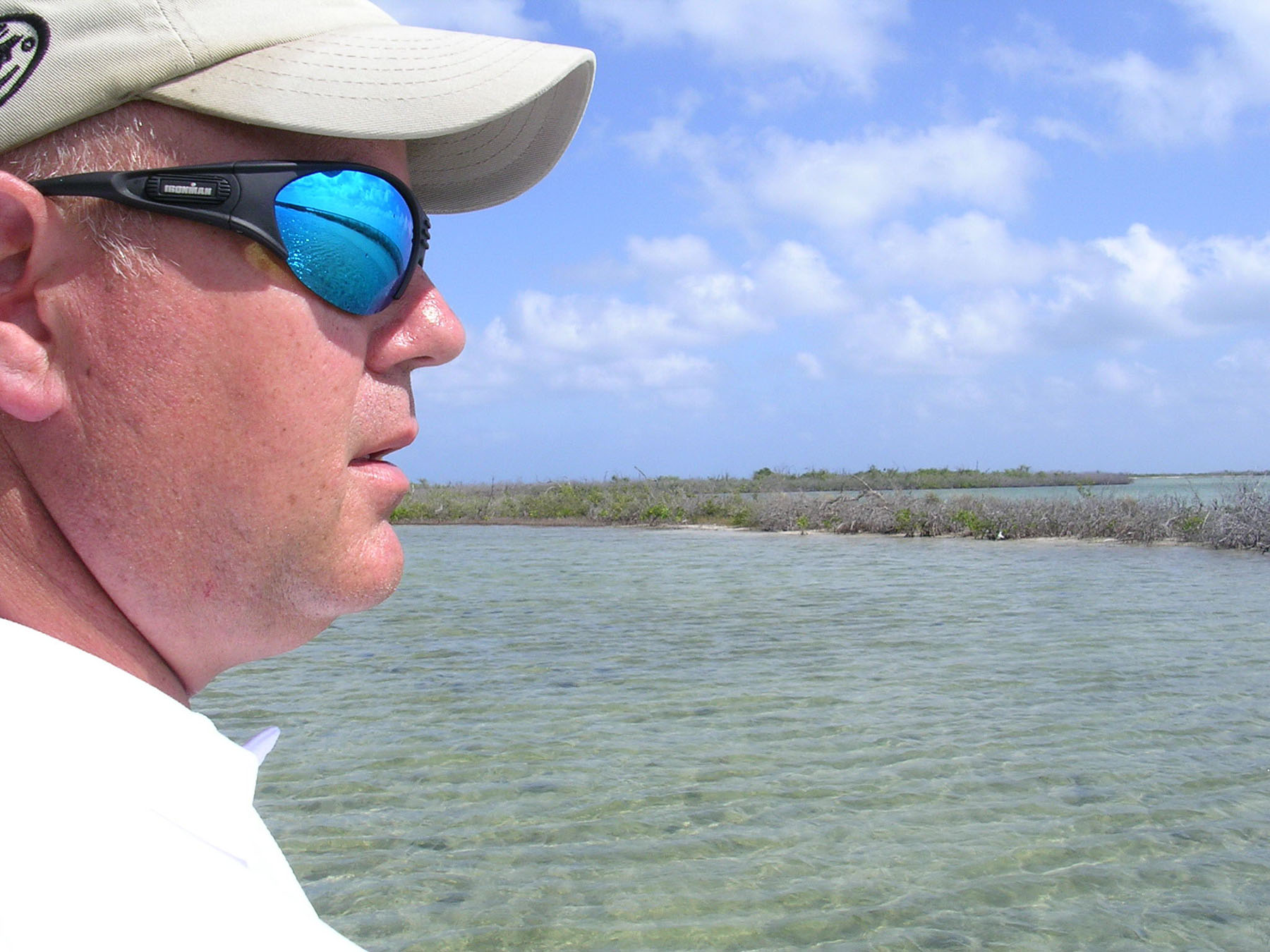 The famous line from The Wizard of Oz where Dorothy tells Toto, "we're not in Kansas anymore," came to mind as my small skiff settled out over a bright white endless Caribbean flat covered with air clear water. The whole sight was far and away different from my normal upper Texas coast water where clarity is measured in inches rather than feet.

From the poling platform I could see a school bonefish milling about in the shallow water in search of small crabs and shrimp, it was classic as they showed their tails and easily gave away their location. It was a no brainer, a gimme, as easy as you could ever expect from one of the most wary fish that swims.

All of the good vibes that came from the initial sighting were soon dashed as one awkward move led to another awkward cast which led to two anglers shaking their heads wondering, "how did we miss that one?"

Scenes like this play out over and over every day as anglers who enjoy seeing their fish before they cast to them make mistakes that just leave you wondering why am I doing this and not soaking dead shrimp someplace else. The frustration factor for the sight fisherman is high and more often than not outweighs the success ratio, but on the day it all happens just right there is no better feeling.

If I had to put it all in perspective I get as much or more enjoyment out of coaching an angler to a fish as I do catching one myself. I never thought in a million years I could be in a boat all day long, never pick up a rod, and call the trip a success. I routinely never cast on sight-fishing trips because I get such a kick out of watching clients, especially those who have never tried this style of fishing.

Hunters suffer from buck fever. At the moment of truth an uncontrollable shaking comes over the hunter, often resulting in a miss. Well, I have seen redfish fever and it has same effect upon fishermen. You can take an accomplished caster and make them look like they have never held a rod before when they see a big redfish well within range. Fly casters will wrap line around themselves, the boat, and anything else in the immediate vicinity thanks to the excitement of the moment. It gets crazy sometimes; I guess that's why we like it.

Over the years I have learned from some of the best fly-casters in Texas, guys like Chuck Scates, Dave Hayward, and TSFM's own Scott Sommerlatte. All of the guys mentioned have one major thing in common and that's the clear water venues they call home, places like Rockport, Port O, and others along the south Texas coast. Areas like these are truly places where you can see the fish first; a little different from the upper coast bays where actually seeing the fish is much tougher due to clarity. Now all of the techniques that have made these guides and anglers so good can be used on the upper coast; they may need to be modified a little, but they will certainly work.

Perhaps the most important piece of this sight-fishing puzzle is the ability to see well and that can be enhanced with quality glasses. Without a good pair of polarized glasses you are basically fishing blind. There are a ton of good glasses out there and they range in all types, styles, and price ranges. I had a pair of $50.00 Orvis glasses that worked wonders for me for a long time. I currently wear a pair of Maui Jim's and I can honestly say they are worth every penny. The key to good glasses is to pay as much as you can afford because the quality of the lens improves with the price. Never pinch pennies on polarized glasses, I promise you there is a difference and you can tell it at the end of the day.

Another valuable lesson learned the hard way is to keep your movement in the boat to a minimum. Remember if you can see the fish they can see you. Fly-fishermen need to keep false casts to a minimum while conventional anglers need to stay away from sudden moves as their outline is silhouetted against the sky. Techniques that we borrow from freshwater anglers are flipping and pitching, the rod stays low and the movement needed to accomplish the cast is minimal. Spinning gear is a great option for this technique. I recently started using the US Reel 230SX for my spinning applications and I have been very impressed so far. The ease of casting light lures makes spinning gear ideal in spite what crusty old Texas veterans say.

Keeping with lessons learned, it's a good idea to talk with your partner about how you will read the water, make sure your version is the same as theirs. One thing I normally try to do is to get a feel for how well the anglers in my boat judge distance, let's just say it varies greatly form person to person. I will often pick out an object in the water and ask the client, "how far is that?" This helps me get a feel for their ability.

It is also a good idea to pick a common point everyone will use as 12 o'clock. When my son, Hunter, was small I would use chalk to write the numbers on the bow of the boat. I would call out, "redfish at 2 o'clock, going right to left," and Hunter would look down, adjust himself accordingly, and make his cast. We would also practice this at home as I would walk around the yard pretending to be a fish while Hunter would cast at me. It was really funny when I would stop and stand on one foot pretending to be a tailing fish, my neighbors thought I was out of my mind but it worked wonders as Hunter understood from that point on how to properly cast to these fish. To this day I would rather have him on the bow of my boat than anybody, forgive me but I'm partial like that.

I have seen 20 pound redfish inhale the tiniest of flies and run frantically from an obnoxious topwater. Small plugs like Top Pups, the Spook Jr, Spittin Images, or Skitterwalk Jr are best for surface scratching while soft plastics and spoons will be just as deadly. Another of my favorites is a hollow tube jig rigged on a weedless Owner Phantom Tube hook. Redfish kill this combination, even when spooked.

Hopefully you can pick up some of the ins and outs of sight-fishing from someone who made plenty of mistakes and your learning curve will not be a steep or long as mine. Understanding how fish react to different factors, reading their body language, and putting yourself into position to catch them are all pieces of the puzzle we strive to put together. Sight-fishing is not for everyone but, for those who have been through the good and the bad sides, you know how addicting it can be. I for one can't get enough and will keep trying as long as the Big Fisherman upstairs continues to bless me with the opportunity.

Good luck on the water and enjoy every minute.