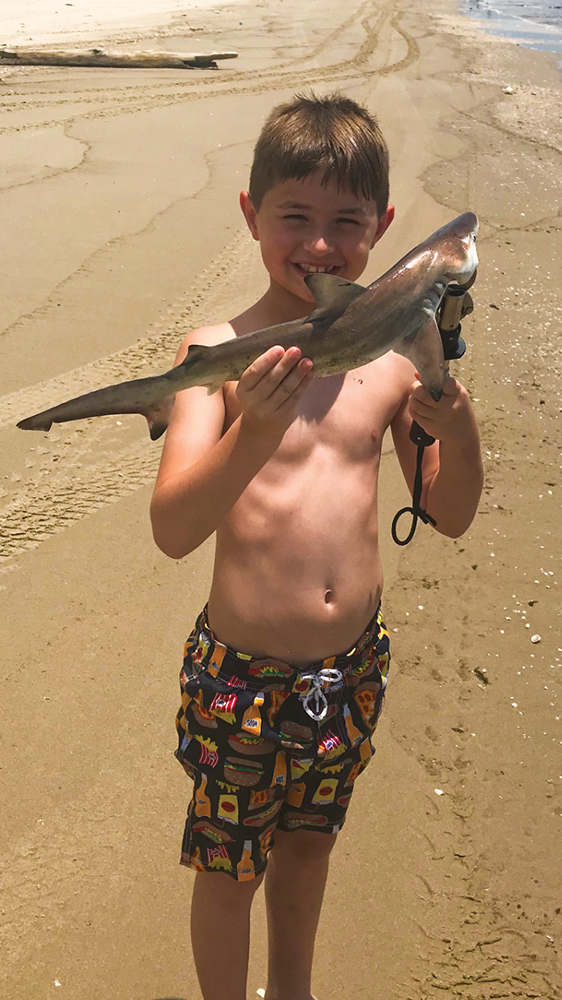 Live bait enabled Lawson Burtsfield to land “Jaws.” His smile says it all!

During the spring and summer months when the weather gets nice and everybody gets the fishing fever, I get lots of families that like to fish without a whole lot of effort. Times like these mean drifting live bait and just having a good time. I personally would rather use artificial lures but if it makes life easier and folks get to enjoy more about the sport of fishing, then I am all for it.

While pre-fishing for some clients who would be bringing their children, I decided to see what kind of program I could get going on live bait. As I retrieved my castnet I could feel that familiar shake of fish trapped in the monofilament webbing, several large mullet that would be suitable for the taxidermist, along with some of those smaller four-inch models were doing all the shaking as I emptied the contents into a bait bucket. Several more throws and some selective culling sent me on my way in search of hungry speckled trout patrolling the vast open waters of Sabine Lake.

After a leisurely run out into what basically is the middle of the lake, I began seeing several feeding slicks and enough active baitfish to convince me that this would be a good place to start. The surface of the water had a gentle ripple that was compliments of an easy southeast breeze that just an hour earlier had been howling as an afternoon thunderstorm crossed the lake and left the area feeling as it were recharged with life.

Peering into my livewell in search of that perfect bait, I had not realized how large most of the mullet were that I had caught. Picking out my first offering all I could think was “big bait for big fish.”

Soon after rigging the mullet under a standard popping cork rig I began to wonder what I was doing fishing with such large bait when I was startled by a vicious strike; a trout of about 18-inches was soon brought to the boat with my five-inch mullet in its mouth.

As I compared the size of the bait to the size of this aggressive trout I could not help but be amazed, this reassurance was all I needed to make me feel much more confident about using these larger baits.

I quickly rigged another mullet and set him on a drift behind the boat, recalling something I’d read about a huge 12-pound trout that was caught in Matagorda or the Laguna Madre that had a 14” mullet in its belly. Talk about big bait and big fish – now that’s the real deal.

I fished in several different spots and made plenty of drifts that resulted in some excellent trout. The two largest fish were gorgeous, pushing twenty-eight inches, and both are still out there swimming as they were released to fight another day.

Each and every strike seemed violent and exciting as one quality fish after another would attack those big baits with a vengeance. On several occasions the strike was preceded by the mullet swimming wildly on top of the water trying its best to avoid a trout or redfish that was sizing it up dinner.

Besides the fact that 75% of the fish I caught were really quality fish, using the larger baits definitely cut down on the number of gafftop and hardheads that I had to deal with. This is a major plus in my book, especially where clients and kids are concerned. Not many things put a damper on a trip like getting finned by one of those slimy rascals. I did on occasion use a small shad just to see what kind of difference it made on the quality of fish caught and the catfish ate up the shad if a trout did not beat them to it.

Now more than likely many folks tuned this article out from the start because it mentioned fishing with live bait and that’s okay; to each his own. That’s one of the things that make the sport of fishing so great.

As I mentioned earlier I prefer to fish with lures but I still get a kick out of watching a cork go under, as I’m sure many TSFMag readers do as well. It’s impossible to discount the fact that at certain times live bait will out produce their plastic counterparts – and that’s just telling it like it is.

As an angler, you can multiply your success rates by allowing yourself to use live bait when the occasion calls for it. Think of it like a golf bag, there are thirteen clubs in the bag and each one is used for a different task. By becoming proficient with both artificial and live bait techniques anglers become more well-rounded and are able to adjust to most any situation. Having all the options covered translates into more fish being caught and that’s what we are all striving for.

The next time you head out in the lake to do some drifting with live bait you should experiment with different sizes and see what happens. These larger baits may not get as many strikes as some smaller offerings but the fish that do strike will usually be a much better fish. Already this year some great redfish and speckled trout have been taken on live bait and some big jacks have run off with some unattended rods. That big bait might just be the ticket for your fish of a lifetime.

If live bait is not your style, don’t hold it against your fellow fisherman who uses bait. We have enough people out there trying to spoil the outdoors for us and goodness knows we don’t need to fight each other.