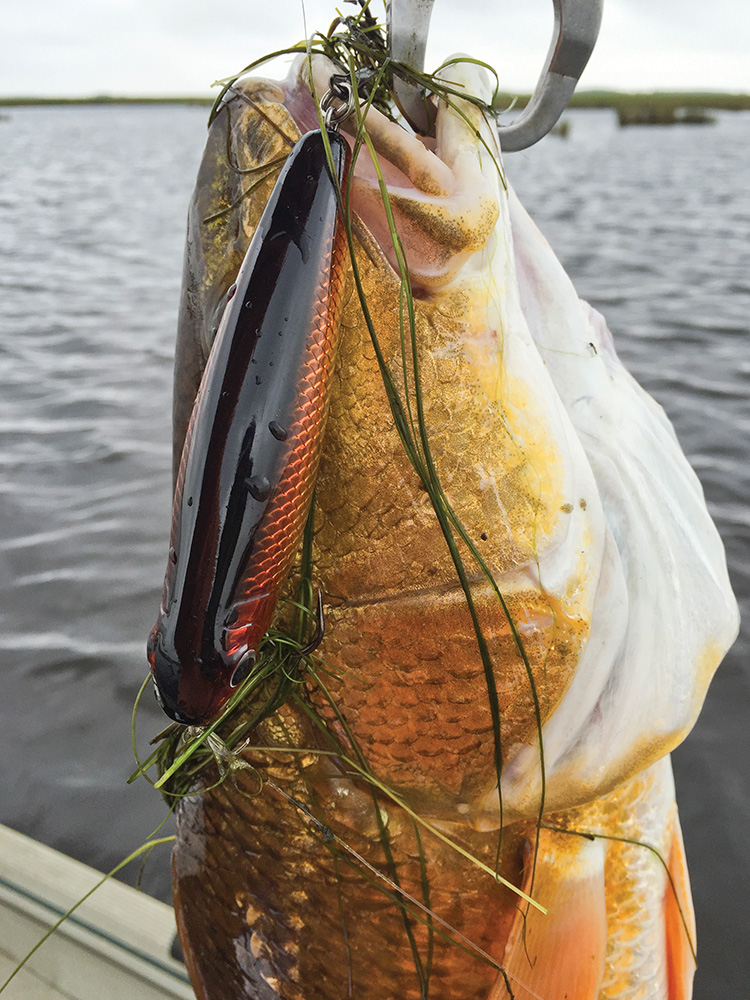 Bottom grasses that help filter sediment and improve water clarity will be scarce during April. Finding it can be a great bonus!

There are a hand full of constants in the world we live in and we can all recite some of the more common ones. The old saying about death and taxes would probably be high on most lists, along with a few more we have all heard from time to time. For those of us who live in the great state of Texas, there is a constant pride exhibited in just about everything we do, and we enjoy telling everyone who is not from Texas all about it. I think it’s called hubris.

Living on the border of Texas and Louisiana, I am blessed to have multiple opportunities to experience some of the best things the outdoor life has to offer; fishing, hunting, cooking, and a love for outdoor recreation in general. Few places I could name off the top of my head compare with the diversity of southeast Texas and southwest Louisiana. The month of April actually begins to highlight how incredibly vast the opportunities in this part of the world can be.

As spring takes control and puts winter in the rearview mirror, many anglers will be itching to find a cure for cabin fever. There’s nothing like hitting the water on a bright spring day, so blue it almost hurts your eyes. With an exponential increase in boat traffic, you can bet your last dollar that the waterways will be busy, so do yourself a favor and be prepared. Large expanses of water can feel as small as a bathtub with all the traffic and those can become even smaller when the wind blows.

April, and spring in general, will certainly give us plenty of wind so get ready for it. The wind doesn’t necessarily have to ruin your plans but it definitely has to be a consideration as you plan your fishing days. The fact that we have so many different options to choose from will be a blessing because you should always have somewhere to fish.

Under normal circumstances, speckled trout are by far the most frequently targeted species on Sabine Lake. During April however, specks take a temporary backseat as anglers throng to our border lake and estuary in search of southern flounder. The vast and virtually untouched marshlands that lie along the east side of the lake provide incredible habitat for flounder, and a host of other species.

The spring flounder migration – when mature fish return from their annual spawning run to the Gulf of Mexico – is highly-anticipated by many anglers and it differs significantly from the fall run. While total landings are usually more numerous, it seems the size of the fish is somewhat smaller on average.

Angling success is usually best in and near sloughs and marsh drains that are affected by tide movement or wind-driven currents. Incoming flows nudge flounder up tight to shoreline grass where they gorge on clouds of small shad that comprise a major portion of the flatfish’s spring diet. Hungry flounder often give away their location as they blast those small shad out the water – anglers should take note.

During outgoing tide flows, flounder will back up to the first piece of structure they can find and gang up there as the baitfish and other forage rolls with the current toward open water. Depressions and guts carved by the tide are prime real estate for flounder anglers.

Scented soft plastics on light jigheads and live bait on Carolina rigs are preferred methods for targeting flounder near marsh drains. The sheer numbers of fish that will inhabit the shallow estuaries of Sabine will not only make a believer out of most anglers, it will also make them happy at the dinner table.

Speaking of happy anglers, a big trout will put a smile on virtually any fisherman’s face and there should be no shortage of good fish to be had in April. The spring trout bite usually centers around somewhat deeper water than during the fall and winter. Classic patterns such as drifting the big reef on the south end near the Causeway Bridge, and strolling the rocks at the jetties will produce the lion’s share of fish in spring, and also some of the largest.

Catching a big trout on the reef is a little more of a crap shoot than fishing the jetties but it’s also a little more weather-friendly. Finding the perfect weight jighead that will allow targeting trout suspended over oyster shell is a daily puzzle, given the depth being fished and the strength of the currents in the area. I would hate to even guess how many jigheads have been donated to that big reef over the years, I know I have certainly contributed my share. But, once you get a handle on it, and with the right combination of lure weight and tide flow, the fishing can get downright crazy. The abundance of fish that will stack on that deep structure is what keeps the local and visiting anglers coming back every spring.

Now, if the weather permits, and the water clarity is favorable, you can bet your last $20 that most serious trout anglers will be prowling the jetties before sunrise, hoping to run into a mega-trout. Topwaters and medium- to shallow-running crank baits will draw ferocious strikes when worked parallel to the rocks. Some of the biggest stringers of the year will come from the jetty area during April, and some of the heaviest trout, too.

I have no clue as to why, but it seems the trout we catch down there are just wired differently. They pull like crazy and act down right mean, compared to the fish we catch farther north in the lake. The quality of the trout and the overall size makes it worth the effort to chase trout at the jetties – not to mention the mystery fish that can spool a reel in seconds – leaving everyone on the boat wondering… “What the hell was that?”

Perhaps the most forgotten real estate in the whole area during April will be the Sabine River and the marshes on the north end of the lake. Typically, the river won’t see much fishing effort as runoff from Toledo Bend can often keep the water extremely fresh and muddy. Grasses that help filter sediment in the marsh will not have grown much either, so the backwaters will be muddier than most anglers prefer, especially those chasing redfish in shallow water.

One group who will more than take advantage of the river will be the pro-anglers from the B.A.S.S. circuit as they return to Sabine for a tournament in early-April. I’m going to make an official prediction in print, if the weather does not get crazy, there will be record weights posted this year.

Following the major flood releases from Toledo Bend in recent years, we have witnessed an absolute explosion in the bass population in the Sabine area. The numbers of fish and numbers of big fish are virtually unprecedented, and that trend will enable the B.A.S.S. guys to show off their skills as well as how amazing our part of the state can be. I am truly looking forward to seeing what happens when the tournament starts.

April is a month of opportunity and there are plenty of quality patterns to go around for every style of angling. Options abound and you can fish just about anywhere you want. Keep an eye on the weather, spring storms can kick up in the blink of an eye. Protected water can be profitable but attempting to reach it is not worth risking your safety.