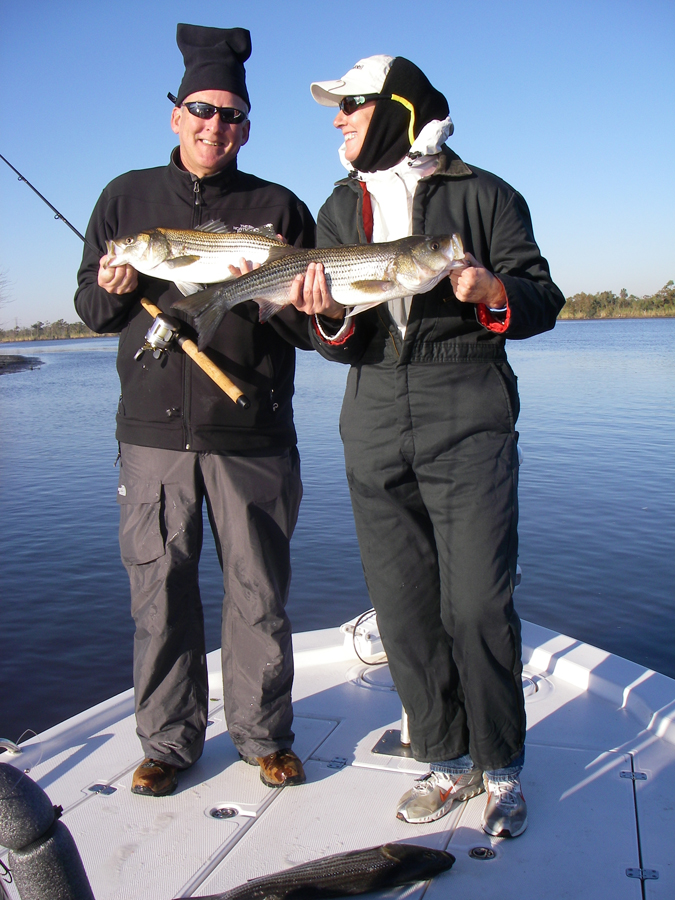 Dick Hamilton and Jane Mitchell with a pair of winter stripers from the Sabine River, fishing with Capt. Dickie Colburn.

My first real deal encounter with striped bass was close to 15 years ago on the Sabine River. Capt. Dickie Colburn and I were out scouting for an upcoming trip and we found much more than we bargained for to say the least. On a very popular stretch of the Sabine we came upon a huge group of gulls working over schooling fish chasing shrimp. Immediately we thought speckled trout and began to catch good solid keeper fish on nearly every cast. After landing several fish we got a much unexpected surprise, a striped bass in the 6 pound class decided he would test the drag on Dickie's reel and he proceeded to do just that.

When the line started to peel off the reel we both figured our new player was a redfish; we both were stunned when the fish broke the water and revealed itself to be a striped bass.

Soon enough we were catching stripers and speckled trout in even numbers, only the stripers were much larger and pulled quite a bit harder. Since then, the striped bass bug hits me every year. Long about this time I forsake the open water and the speckled trout in favor of chasing these hard pulling fish. They are just down right mean and extremely addictive.

Now wintertime sport means different things to anglers along the coast; most think about chasing big trout on secluded flats while others turn the majority of their attention away from fishing and over to hunting. Truth be told I love to chase big trout in the winter but I really love catching stripers during this same time of the year.

Fishing for stripers has some serious benefits that you don't get from wading and hustling big trout, namely you can do it from the boat and don't have to brave the bone-chilling water. Another benefit is that you get to fish in the protected stretches of the river when the wind blows and makes the open lake look like something from the Poseidon Adventure. Oh and one other thing you have to look forward to when you go chasing stripers, you catch plenty of redfish and that's fine with me as well.

If you have read many of my columns you know I am big fan of fishing deep water. Breaks in the river and Intracoastal Canal afford you some excellent locations to catch fish during the winter months. The deep water pattern is one that many saltwater junkies are not familiar with; relying on electronics and reading deep structure just turns most coastal anglers off. If you can get over the uneasiness that comes with the unknown of the deep water you can really be successful, especially when chasing stripers.

Now anyone with a reasonable amount of common fishing sense can catch fish when they are blowing holes in the surface of the water like schooling stripers will do. Just about any bait from soft plastics and topwaters to crankbaits will attract vicious strikes. When these fish are not visible on the surface you need to probe the deeper water with a variety of offerings; perhaps the number one bait for doing this is a Hoginar.

The Hoginar lure is responsible for a ton of fish during the winter months. It is extremely versatile, and most of all it works. The Hoginar is a blade bait that resembles a Rat-L-Trap and a spoon; it's thin like a spoon but swims like a Rat-L-Trap. The Hoginar can be fished like a crankbait or you can fish them vertically like freshwater guys fish spoons in the winter.

We modify the Hoginar by taking the front treble hook completely off and putting a single hook on the back instead of a treble. The single is much easier to remove from redfish and stripers alike, especially if they inhale the bait. Straight old chrome or gold works well along with chartreuse or white, color is not nearly as important as the vibration the bait puts out.

Besides the Hoginar you can use soft plastics like tube jigs or shad imitations and do just as well on most days. Live mullet or shad also catch their fair share of stripers, especially in the fall. I personally love to catch them on fly. Big deceivers and clouser minnows have duped fish to 10 pounds at the mouths of marsh drains on outgoing tides.

An average striper in the Sabine River is roughly 6 pounds and we have seen them reaching nearly 40 pounds talk about a gorilla on 12 pound test! It won't take you but a fish or two to get the itch to chase these super strong bullies of the river. They will make you think twice about going to the lake next time.

From now until roughly the first part of March is the prime time to go after these fish on Sabine, the cold overcast and gloomy days seem to be the best
since these fish are so light sensitive. On bright days they tend to hang out deeper or up under structure like piers and old ships that are scattered along the banks of the river.

Their love of structure will undoubtedly cost you a few lures as they seem to always swim into the nastiest stuff to try and escape once hooked. I lost a couple of hundred dollars in flies one year while trying to pull some stripers out from under a pier where they were stacked up. I could hook them but I rarely got one to come out so I could land it. I have never had so much fun losing baits in all my life, it was awesome to see those fish kill that fly and make a run for the pilings while breaking my leader and my heart.

If you are looking for something different this winter; stripers could be just what the doctor ordered. I know I am certainly a fan of these fish and I am sure once you catch one that you will become one as well.

To each and every one of you out there who read our magazine or fish with us, I hope you and yours have a very prosperous and blessed New Year. Be safe and enjoy the water in 2007.