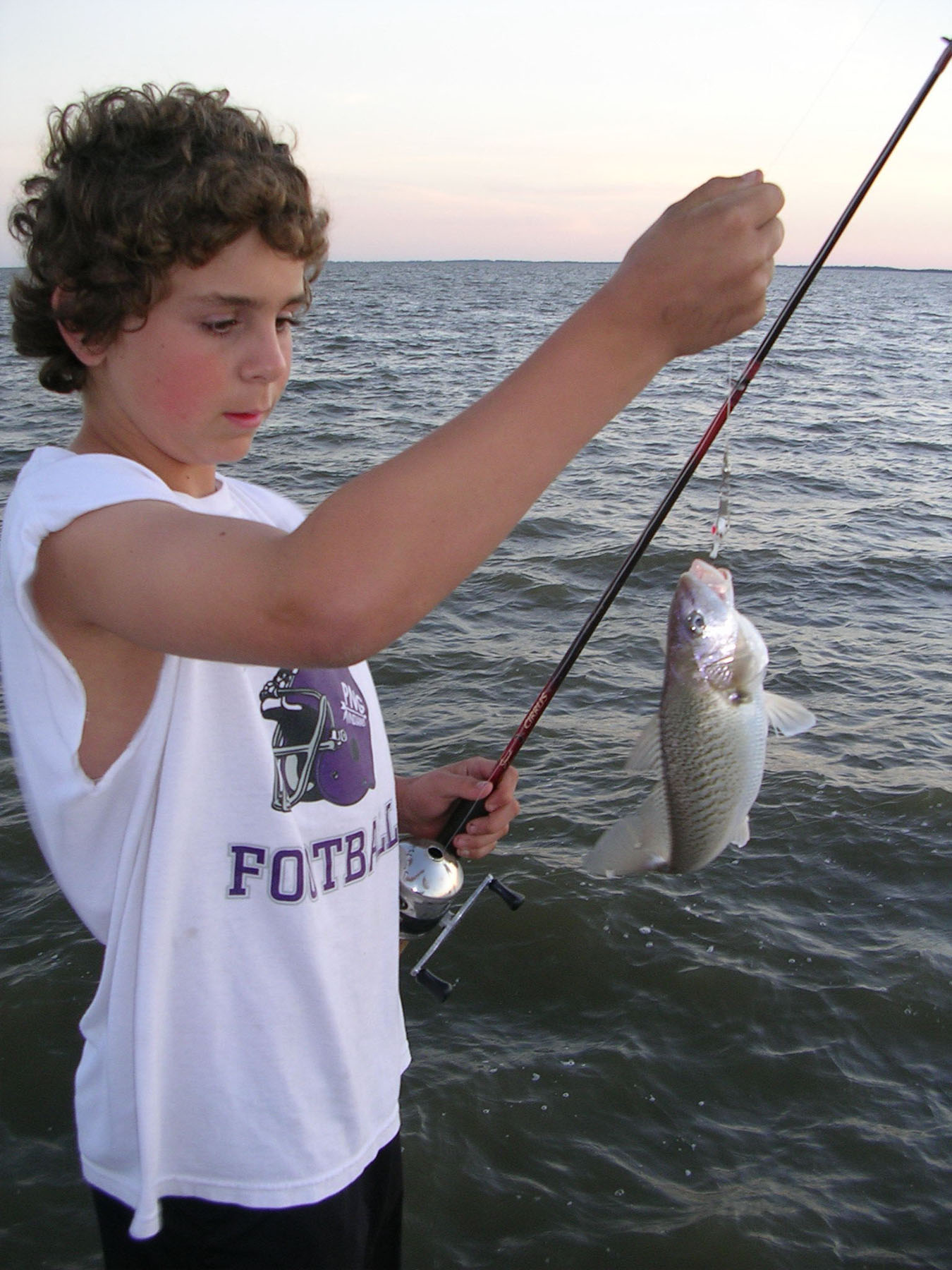 School is out, time to get kids hooked on fishing!
One look at the thermometer says it all; summer is here. Those cool crisp mornings that were so common during spring are all but a memory now. Sweating like a family of rats in a wool sock before 7:00AM is something we will have to get accustomed to for the next several months. All those prayers for the wind to stop blowing will soon be answered and the fishing congregation will be begging for a breath as the summer heats up and Texas coastal fishing gets hot as well.

The month of April and the first part of May were downright tough for us on Sabine and Calcasieu, the winds that were so noticeably absent earlier in the year behaved like a bad houseguest over-staying their visit. Besides cursing the wind we also got a big dose of rain locally and runoff from both the Sabine and Neches rivers. The water clarity went from penthouse to outhouse in the span of a few days and it has taken some time to recover. Hopefully, summer weather patterns will change all this and usher in better fishing. We look forward to calm mornings and fishing more water in a variety of ways.

The open lake will soon be accessible and more fisherman friendly as the flags begin to droop. The big schools of shad that inhabit the fertile waters of Sabine will be easier to spot when the waves aren't breaking over your bow and the water doesn't look like a stale Yoo-Hoo. Being able to cover more ground is the key and those who venture a little farther into the wide-open spaces of the lake will be rewarded with some outstanding fishing and much lighter angler pressure.

I'm not real sure why so many anglers hang within a half-mile of the shoreline. There is a big part of Sabine that sees very little pressure, it's like it doesn't even exist. I have made the analogy for years in seminars that when we were kids all we could think about was being able to cast as far away from the bank as possible because we knew all the fish were out there. Years later we grow up and buy a fancy high dollar boat and, what do we do? We go back and cast to the same bank where we stood as kids. I can't figure it out.

Now don't get me wrong, there are all kinds of patterns and methods we can employ to catch fish. All I'm saying is be open to a different approach because you never know what you might be missing.

Speaking of different patterns and approaches, I have really had to go back to school to learn some water that I once knew really well. So much of the shallow marshes that border both Calcasieu and Sabine were totally transformed during Hurricane Ike. Areas that I have fished for years don't even exist anymore and many of the places that still exist are almost inaccessible. There are some new places that were opened up so it's not all bad; it's just going to be another learning process.

My son Hunter and I have been locating and marking some of the new features as well as some of the debris. We stumbled up on a pair of really large portable fire fighting rigs not too long ago, big carts with tanks and hoses that you see in industrial settings. No telling where they came from but the inspection tags were still intact, go figure.

Despite all the changes, we have managed to find some fish and it appears the populations are in good shape. These next two months will be prime for chasing tailing redfish and the big schools that will still be together. The morning temperatures will encourage aggressive feeding and the fish will readily show themselves as they pay no attention to anything but their next meal. The same kind of behavior can be said for the fish in the open lake; the early bites will be aggressive and then taper off until tidal currents trigger them to feed again.

The early-bird fishermen who enjoy the jetties will probably see the lion's share of good trout for a while, that pre-dawn topwater bite is about as fine as it gets. Working the rocks with a topwater plug can be unpredictable and exciting. You never know what kind of creature is going to inhale that plug.

Everything in that part of the world strikes violently and pulls hard. Big trout, bull reds, jacks, and even a tarpon or two can show up and run away with all your line and your favorite plug. I have no idea why but it just seems like those fish that hang around the jetties pull harder, we always say the trout are wired up 440 as they just go ballistic when you hook one. That jetty pattern is a favorite of many local anglers and I can't say as I blame them either, it seems like you always come back from there with at least a great story and most of the time with some good fish.

Besides being able to look forward to better weather, many younger anglers will be looking forward to school being out. Graduation invitations in the mail signify the end of the school year is near and summer vacation is just around the corner. I thoroughly enjoy it when clients bring their kids; some of my most memorable trips have been of the family variety.

For whatever reason it seems like when you bring kids on the boat you get a whole new perspective about many different things. Fishing with kids tends to help me get grounded; help me understand just what is really important. Some of the absolute best conversations I have ever had with my son happened when we were fishing. It doesn't really matter what your fishing for or how you go about it, having a kid fishing with you is a treat. Take a break sometime and change up your technique, soak some dead shrimp on the bottom and take the time to talk to your kids. The topics of conversation will amaze you and the memories will last a lifetime.

One last thing to remember when it comes to taking kids fishing, make sure it's fun. Don't expect their attention span to be the same as yours, cater the trip to them. Remember that they may not be as excited about the trip as you are; the goal is to make them want to come back. If they want to go look at things or fish a while and then play a while, let them. Bring plenty of soft drinks and good things to eat and remember; it's all about them.

The summer months will provide anglers of all skill levels an opportunity to succeed. There will also be plenty of different methods to choose from and places to use them. Some of the best fishing of the year is upon us and I hope each of you take advantage of every chance you get to enjoy the time on the water.