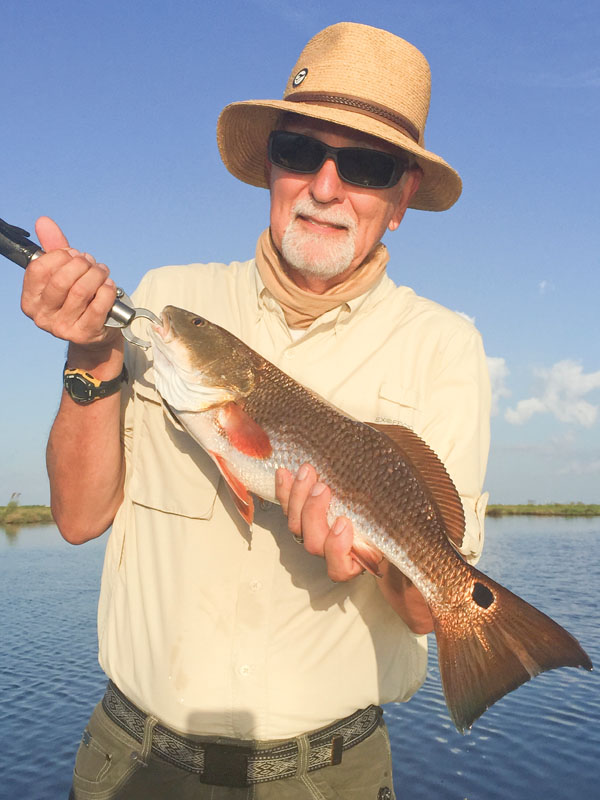 Dean Kahney with bucket list red – his first on fly!

Unless you live under a rock in a dark corner of the planet, you are keenly aware how fanatical Texans are about football. The summer months are looked upon with great enthusiasm as thousands of football players from high school to pro begin their preparations for the fall campaign by first trying to beat the Texas heat. The football term two-a-days refers to the practice of working out twice a day, usually in the morning and again late afternoon, to escape the hottest hours of the day. Well, football players aren't the only ones trying to beat summer's high temperatures; fishermen face the same dilemma. Triple digit temps not only have an effect on fishermen but also on the fish, in some instances.

The whole key to successful summertime fishing is figuring out how to best cope with the heat and that means focusing on the best times of the day and the best tides. Anglers on my part of the upper coast who have to make the biggest adjustments in how and where they fish are those that stay in shallow water areas like the marshes around Sabine and Calcasieu.

During late-summer these shallow and often brackish marshes can have some ridiculously high water temps, which in turn can really do a number on the fish. Surface temps in the 90s will begin to make things uncomfortable, maybe even dangerous, for even the heartiest of redfish as oxygen levels decrease during the long summer days. Many times these fish will retreat to the deepest areas of the marsh in search of cooler water. Several years ago I was helping some Florida angler's pre-fish for a tournament and watched them carve out a very unlikely but successful pattern by fishing deep ditches adjacent to larger back lakes and ponds. We watched several other anglers scour the shallow water and finally give up after having little or no success while the deeper ditch pattern steadily produced quality fish. It's amazing the difference in temperature that comes from water only a couple of feet deeper than the surrounding area, especially if it has a decent tidal influence.

A godsend of sorts for shallow water fish is matted vegetation on the surface that functions as a canopy providing shade and slightly cooler water. Many of the areas I like to fish will get covered in widgeon grass, turtle grass, or even coontail, and the fish seem to gravitate to it like a magnet. Besides the immediate relief from the heat that mats offer, there is also the added bonus of bait that tends to gather there for cover. Shrimp, crabs, and various baitfish species will seek the safety and comfort of those grassy areas just like redfish, and that's a great combination for both fish and fisherman. Certain adjustments in tackle and technique will need to be made in order to properly fish these areas and it all starts with lure selection.

The Stanley Ribbit, hands down, is one of my absolute favorite ways to fish when live and floating grass becomes part of the equation. Taking a page from the freshwater playbook on fishing vegetation, the Ribbit opened up a new world for me and my clients. Fishing water that in the past was basically off-limits due to the grass nuisance enables me to fish virtually anywhere with confidence. The Ribbit is not only a versatile lure but the strikes it provokes from thick grass habitats are heart stoppers! Definitely worth experimenting if you've never done it before.

Now the shallow water folks are not the only ones who have to adjust to the heat open water folks have to adapt as well. The fish in the open lake or bay are not generally as affected as the shallow fish but they certainly can be at times. Surface temps, high skies, bright sun and little to no wind can all be factors that stifle a bite. The most obvious factor is surface temperature and that necessitates perhaps the biggest adjustments. Tons of anglers will habitually patrol the shorelines barely a cast away from land, regardless of other factors. During certain times of the year that program pays dividends but not so likely during summer.

Another mistake I see often is boats anchored at the mouths of marsh sloughs that empty into Sabine Lake during summer, apparently oblivious to the fact that the water coming out is much hotter than the water in the lake. Most of these folks go there simply because it worked earlier in the year so it must be good all the time. Great idea in cooler months but not so much in summer.

Perhaps one of the best bets during the summer months is to burn a little gas, get off the shoreline, and go see what the open water has to offer. The telltale signs of gamefish feeding activity are slicks with skipping shrimp and greyhounding baitfish nearby. Best of all can be no crowd to dampen your enjoyment.

So we've covered how sizzling temperatures affect the fish, now it's time to consider what it does to anglers. For most of us the thought of performing physical work in summer heat is downright unappealing. The funny thing is that fishing in those same temps somehow doesn't seem so bad. Standard precautions of staying hydrated, lathering on plenty of sunscreen, and wearing appropriate clothing go without saying. Many folks also adjust their time schedule and leave the dock during evening hours to beat the heat. Fishing in the dark has its own set of rules and precautions to follow so we'll talk about that at another time. But if you do plan to navigate and fish at night be sure to file a float plan with a responsible party and make sure all your safety gear and nav lights, handheld spotlight, etc., are in good working order.

Back to our schedule change, the pre-dawn launch that allows you to grab that first hour or so before the sun starts cooking is a magical part of the morning and a favorite for many fishermen. The same can be said for the last hour of daylight until sunset. These times are tailor made for catching big fish in the summer and there are many anglers I know who try to do both in the same day. The thought of two or three fishing hours at dawn followed by two or three more at sunset is my idea of a "Texas Two-A-Day."

Recently I had the good fortune to fish with Dean Kahney and George Sutherland of the Texas Flyfishers. Following our Texas heat protocol we launched well before the sun came up and took advantage of the cooler and calmer conditions. Both of these guys are good fly fishermen and pleasant company in the boat. The main goal for the trip was to put Dean on his first-ever redfish on fly tackle. Our plan came together early as we were treated to slick-calm conditions which made spotting fish all the easier. After a few lessons on how to approach the fish, it wasn't long before Dean was able to cross catching a red on fly from his bucket list and I couldn't have been happier for him. It's always a great privilege to be part of a memorable occasion like a first- or biggest-ever and I get a big kick out of helping folks reach those milestones.

Make schedule adjustments to beat the heat and hang on–the first shot of autumn should arrive in less than two months.