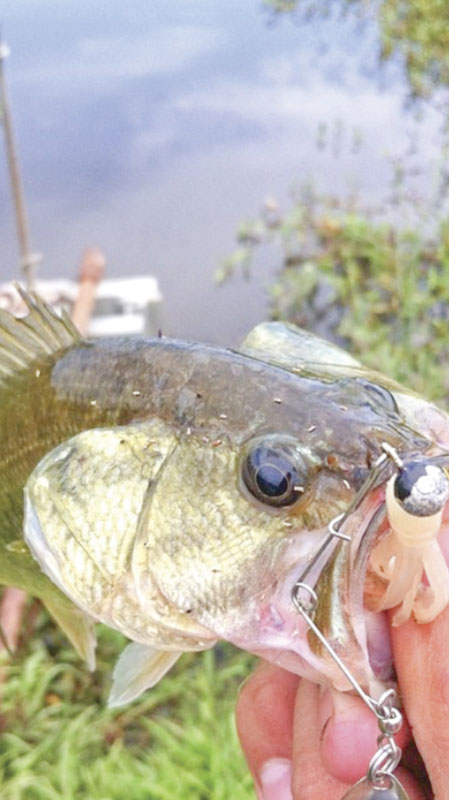 Hungry little large mouths have taken over in many of the backwater lakes and ponds.

My mornings typically begin the same as most fishermen as I go through my mental checklist of the items I need or the potential areas I may choose to fish. Loading gear and taking care of the boat to insure a safe trip to and from the launch is also high on my list. I'm sure most of you reading this have a favorite place to stop and gas up your rig, grab some ice or snacks, and maybe a cup of coffee the same as I do. It's a familiar routine that puts us in the right frame of mind to go out and enjoy a day on the water. Recently, I was well into my morning routine as I eased up to the gas pump and for some reason I left my key in my truck turned on so the radio continued playing while I pumped my gas. There, coming out of the speakers, was the one and only Robert Earl Keen Jr and his famous The Road Goes on Forever tune that most any Texas country music fan can recite lyrics frontward and backward. I stood there and listened as I pumped my gas and smiled while thinking to myself about how true those words were as Keen sang "and the party never ends."

On the way to the launch I started thinking about how fishermen seem to always be in search of the next "something" like that famous road in the Keen song. It dawned on me that there was a lot of truth in that song and I could see some of that in my own time on the water. Take for instance the very basic action of trying to figure out the fish each day, otherwise known as establishing a pattern. There are tons of variables that have critical effects on each pattern and that's exactly what drives fishermen to either succeed or fail. Some areas have their own regional patterns that occur like clockwork while others have far more difficulty stringing together consecutive days or weeks much less months or years. Searching for answers seems to be a common thread for those who fish and it looks like we all fall somewhere into that group.

For now, in my part of the world around Sabine Lake, we are in one of those cycles that only come along every so many years. Normal conditions and patterns would dictate that the entire lake would be one giant livewell flush with shad, pogies, and shrimp. All that bait under normal circumstances would be running for its collective lives as it was pursued by everything that swims and most everything else that flies. Huge schools of redfish and trout would normally be stomping holes in the lake as they feasted under the gulls and terns that opportunistically follow these schools of bait. This action would be normal anywhere from the IH-10 Bridge to the gulf and almost all parts in between, had this been a normal summer. Instead we have two thirds of the lake basically unoccupied as the struggle for salinity supremacy continues between the runoff and rains from upriver and the strong tides from the gulf. As of this writing the runoff and rains appear to be winning as the majority of the fishing world currently resides south of the Causeway Bridge.

Now this pattern is not completely new but it's also by no means normal either. We have in the past had wet summers that forced fishermen to concentrate their efforts farther down the lake and that is exactly what's going on now. Anglers who enjoyed the late summer and early fall patterns of soaking live bait in the far northern reaches of Sabine Lake and on into the river are being effectively shut out as the freshwater just refuses to cooperate and let things get back to a somewhat normal status. Many areas that traditionally hold some fantastic speckled trout during the summer are coughing up boatloads of large mouth bass! The freshwater folks are having as good a summer as many can ever remember.

Speaking of bass, I ran a huge section of marsh recently while scouting for an upcoming redfish trip and I quickly realized I was in trouble as one thirteen-inch bass after another continued to inhale my Savage shrimp under a cork. I was absolutely amazed at how many bass were in some of these areas until I really started looking around. Several of the larger boat cuts were choked with lily pads that had beautiful white flowers growing among them. The different species of grass that are normally prevalent in only a few areas were everywhere and the water looked like it had been poured from a bottle of good bourbon. It truly was gorgeous but it wasn't exactly what I was looking for because the redfish were scarce to say the least. So the never-ending search sent me south where I eventually found some cooperative redfish and far fewer large mouths.

Even though this current pattern of far more freshwater being present than we are accustomed to causes us to change how we normally fish, it will certainly pay dividends in the long run. The freshwater staying in the brackish marshes for longer periods will promote new growth and allow more grasses to take root, which will certainly help some areas with erosion problems. The new grass will be a welcome sight for the many duck hunters who inhabit the area starting in September with teal season and on into November when the regular duck season gets cranked up. The more vegetation that grows will also help provide food and cover for not only bait fish but also juvenile sportfish that begin their lives in the marshes and estuaries that surround Sabine. In the past after these types of conditions, we have seen tremendous fishing in the years that follow especially in the numbers of redfish that become available. The variations in the patterns are an inconvenience at the moment but they'll be a blessing in the future.