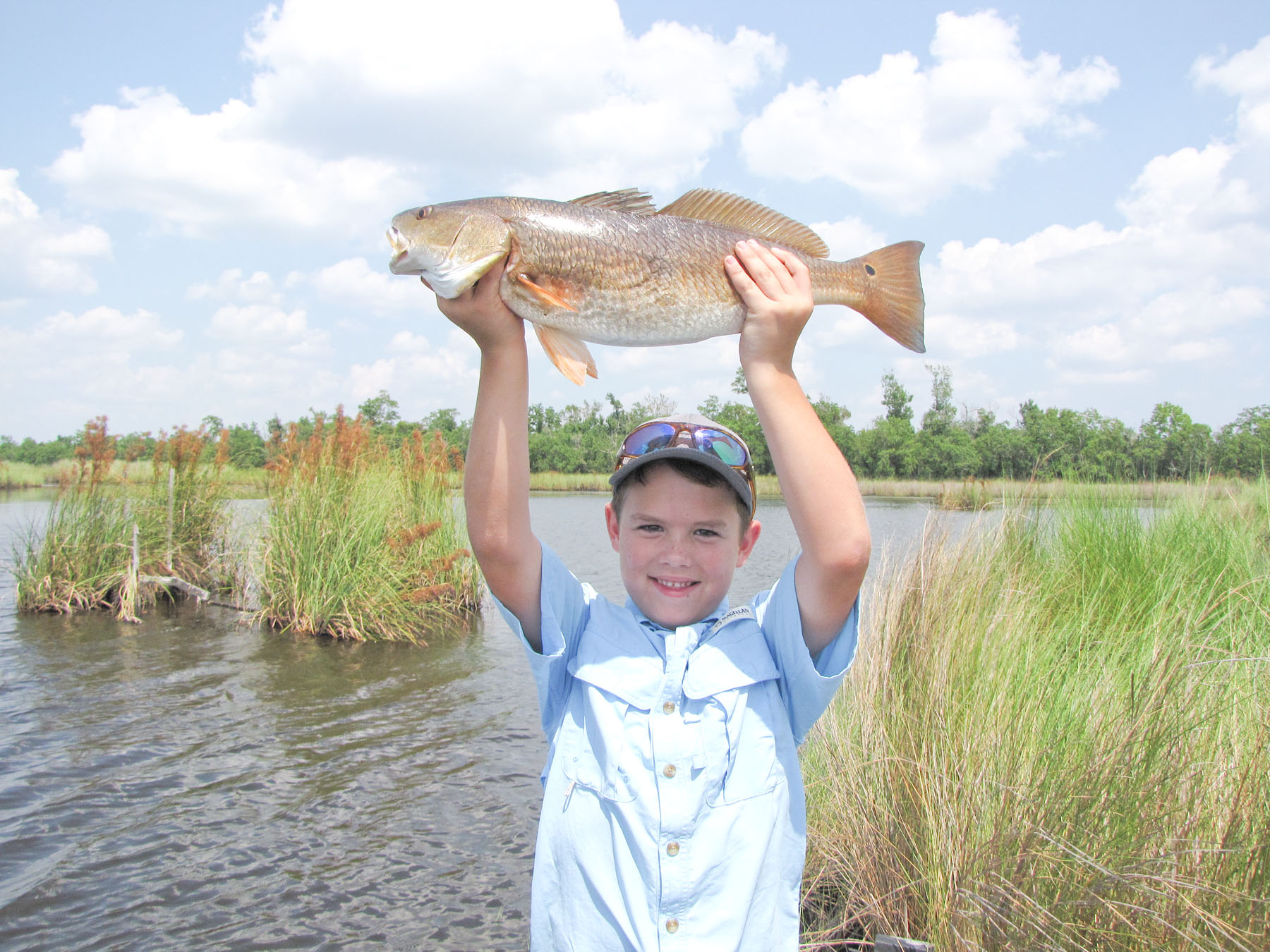 An elated young angler with his first-ever redfish; meet seven-year-old Ty Thames.
If someone were to walk up and ask, "Do you remember your first fish?" - More than likely each of us could recite a story that has been etched into our memory from many years ago with flawless detail. That memory, along with other important ones, stands out among the many bits of information floating around in our minds. In some cases we actually mark time by reliving those memories with a simple phrase like "Do you remember when."

Milestone memories, like that first fish, are one of the top reasons I enjoy taking people fishing. Many years ago when I first started guiding I was given perhaps the most valuable piece of advice I could ever hope to receive from good friend and mentor, Dickie Colburn. Dickie looked me straight in the eye and said, "Son let me tell you one thing, when people get on the boat to fish with you that's not just another day on the water, that is their special day and you treat it like that because tomorrow when you are back on the water with another group they'll be somewhere remembering their trip. They will remember that day for a long time so you treat it accordingly and do everything you can see that it is special." As a guide I can't remember getting better advice and that bit of wisdom from Dickie has served me well.

One of my absolute favorite things about guiding is having the opportunity to take people out who are new to the sport, especially kids. I've always been of the opinion that you can take the best fishermen in the world out, a TV celebrity or some other high profile angler, and have a great day on the water with them. In a year or so you could see that same angler and ask them about that trip and it may take them a few minutes to recall the details. Now you take a kid or beginner angler on the same trip and they will recite the details of that day perfectly for many years. The importance or significance of that day on the water is not lost and often times leads to a desire for more days just like the first one. That my friends is what we all refer to as being "hooked on fishing."

Just recently I was able to share a day on the water with Ronnie Thames and his seven year old son, Ty. It's safe to say that Ty has been bitten by the fishing bug as he takes every opportunity to fish with his dad in every body of water up to and including shallow puddles of water in the Wal-Mart parking lot. Ty or "T-Man" as he is called does all the right things and asks great questions for a seven year old. I knew when we left the launch I'd have to be on my "A game" if I was going to keep up with T-Man. Our ride to the marsh was filled with random questions about the fish we would see, alligators, sharks and all other types of inquiries from a seven year old's mind. I enjoyed listening to him and explaining things that I often take for granted, which in itself is refreshing.

We finally reached our destination and Ty was wide-eyed as everything was new and he couldn't see it all fast enough. Rafts of baitfish scattered and an occasional redfish made a wake in the pond that we had entered so it seemed like the water was alive. We rigged the rods up, adjusted our course, and began probing the pond for hungry reds.

Now right here is where you can make or break a trip with young anglers by over complicating things. Our set up was simple as we tied up a couple of Double D rattling corks with short leaders and 3" GULP shrimp on 1/8 ounce jigs. A simple and effective way to cover water that would be easy for a beginner to master. The rattling cork was just the ticket as the first redfish of the day pounded it and began to give Ty a pretty good fight.

After a few minutes of coaching Ty on the proper way to fight the fish he brought the feisty five-pounder alongside the boat so we could land it. I slid the Boga Grip in the redfish's mouth and brought on it on board. This was Ty's very first saltwater fish so high fives, hugs, and congratulations were exchanged as we closely examined the fish. Ty couldn't get enough of the redfish as he looked it over from top to bottom at least ten times. It was really cool to see how excited he was and how proud his dad was at the same time.

After that first fish we continued to probe around the marsh, watching all sorts of critters and birds while still looking for more redfish. Ty was doing a great job casting and seemed to be very determined to find another red. I gave Ty a target to throw at on his side of the boat and he hit it like a pro. The cork settled for just a second before Ty began to retrieve line and pop the cork. On the second pop the cork was again under and this time it was a sure enough stud of a redfish that I could see from the poling platform.

Ty's little spincaster screamed like a couple of cats fighting as the big redfish decided to head for Cuba with Ty's cork. I went into panic mode as I tried to gain ground on the fish before Ty got spooled or broke off. Unfortunately for Ty during the fight his drag got tightened down a little too much and the big redfish broke off and was still heading east the last time we saw it. Now what would a saltwater trip be without a story of "the one that got away."

Although Ty was understandably disappointed at losing his fish this was a great opportunity to advance the young angler up a notch and that's exactly I did. Instead of rigging Ty's spincaster back up, I put him on a regular spinning rod. A couple of practice casts and soon Ty was throwing like a pro. The spinning rod set up now gave Ty a fighting chance against those better fish since the drag and line capacity was so much greater than the little closed-face spincaster he'd been using.

I am a huge advocate of using the spinning reel rig for young anglers instead of a closed-face model for all of the above reasons. It makes them better anglers and greatly improves their odds of catching fish. I really like to give young anglers the smaller series spinning reels like the 1500's because it fits their hands better and is so much more ergonomically friendly.

One of the smaller spinning reels that holds 80 to 100 yards of 6 or 8 pound mono will be perfect when you change to braid of the same diameter. One hundred yards of 20-30 pound-test braid that's 8 pound diameter is plenty for even seasoned anglers to catch nearly any inshore fish that swims. It's a terrific setup and one that I highly recommend for anyone, and especially those with young anglers. I just so happened to have an extra of those spinning reels handy and gladly presented it to Ty so he could use it on our trip.

My day on the water with Ty and his dad was enjoyable to say the least, and we have already made plans to do it again. According to Ronnie the fishing fever has really taken over Ty and he is searching out new waters to conquer near his house until he can get back to the saltwater. In all reality, isn't that what we are all doing? I know I am.

Enjoy your time on the water, take the time to share it with a young angler, and respect the resource for the future generations.