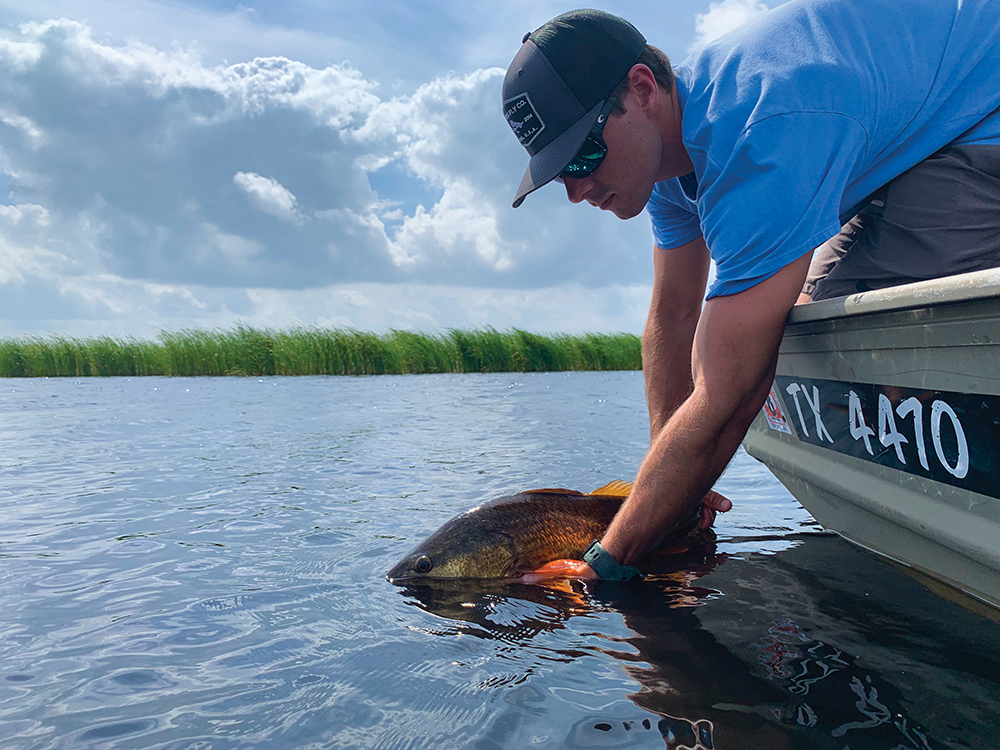 Although redfish are known for heartiness, a few extra minutes to fully revive them before release can greatly influence their survival.

What a difference a few weeks can make. This time last month we were wondering if the wind would ever quit blowing and now we just need a gust every now and again to make life tolerable. The summer heat is upon us and lots of different fishing methods will soon be in play. Many local anglers will seek the cover of night to beat the heat while still others will enjoy a casual wade along a shoreline. One thing that's for sure, we should start seeing some unexpected guests like sharks and jellyfish, so be careful if you get in the water.

The months of April, May, and early June were down right tough for us on Sabine and Calcasieu. The winds that were so noticeably absent earlier in the year acted like a bad house guest who came for a visit and decided to stay a while. Besides cursing the wind we also got a big dose of rain and runoff from both the Sabine and Neches rivers. The water clarity went from the penthouse to the outhouse in the span of a few days and it has taken some time to recover from that blow. Hopefully the much more consistent weather patterns of summer will soon usher in some of the best fishing of the year. We look forward to the calm mornings and the ability to fish wider expanses of water in a variety of ways.

The open lake has become more accessible and much more fisherman-friendly as the wind socks and flags begin to droop. The big schools of shad that inhabit the fertile waters of Sabine will much easier to spot when the waves aren’t breaking over your bow and the water doesn’t look like a stale Yoo-Hoo. Being able to cover more ground is the key and those who venture a little farther into the wide open spaces of the lake will be rewarded with some outstanding fishing and much lighter angler pressure.

I’m not real sure about the phenomenon or the “magnetic pull” that the shoreline has, but for some reason most anglers rarely ever get any farther off the bank than maybe a half mile. There is a big part of Sabine Lake that sees very little pressure, it’s like it doesn’t even exist. I have made the analogy for years in seminars that when we were kids all we could think about was being able to cast as far away from the bank as possible because we knew all the fish were out there. Years later we grow up and buy a fancy high-dollar boat and, what do we do? We sit in the boat and cast to the same bank where we stood when we were kids. I can’t figure it out.

Now don’t get me wrong, there are all kinds of patterns and methods to catch fish and they can be caught in a variety of places and depths. All I’m saying is be open to a different approach because you may never know what you are missing.

Besides being able to look forward to much better weather, the kiddos are all anxious to hit the water now that school is out for the summer. I thoroughly enjoy it when clients bring their kids; some of my most memorable trips have been of the family variety. For whatever reason it seems like when you bring kids on the boat you get a whole new perspective about many different things.

Fishing with kids tends to help me get grounded; helps me understand just what is really important. Some of the absolute best conversations I have ever had with my son happened when just the two of us were fishing. It doesn’t really matter what your fishing for or how you go about it, having a kid fishing with you is a treat. Take a break sometime and change up your technique, soak some dead shrimp on the bottom, and take time to talk to your kids. The topics of conversation will amaze you and the memories will last a lifetime as well.

As for me this month, I’ll be where I spend most of my time, in two feet of water or less, chasing redfish around the marsh trying to coax a strike on a topwater plug. The summer months are just my bread and butter due to the absence of those high winds we fight constantly at the end of spring. Those calm mornings make locating spooky fish a much more user-friendly pursuit so I tend to make the most of it every time I am afforded the opportunity.

But the lighter wind and warmer temps that we all dream of also come with their own fair share of difficulties. The air temp isn’t the only thing that rises during the summer, the water temp also climbs. Many times the water gets so hot it makes those redfish lethargic and difficult to get them to eat a lure. Most strikes are just reaction at this point so casting accuracy is at a premium. If I can’t make those fish eat a topwater offering I will tend to go with a tube jig or a Fluke rigged weightless so I can let the bait fall in the face of the fish and that will usually get a solid strike. Best colors tend to be lighter so you can see the fish eat it and get a good hookset.

Once you hook up it’s really important to try to land and release these fish as quickly as possible because they will stress much more in the elevated water temps. I will usually go with a little heavier action rod and stay with braided line so I can put some pressure on them and get them to the boat sooner. Releasing these fish takes some time so don’t get in a hurry, respect that fish enough to take the time to be sure it is ready for release.

Work the fish in a swimming motion to help its muscles become free of lactic acids that built up during the fight. Be sure to keep the fish upright until release and watch to be sure it doesn’t turn belly up and float a few minutes later. Nothing infuriates me more than seeing folks leaving a trail of fish floating dead or struggling on the surface because they couldn’t take time to revive and release those fish correctly. You owe it to the fish and to other anglers to do your part and be a good steward of the resource. Don’t ever forget that.

The outlook for the summer will be much different than in years past as we continue to deal with huge amounts of runoff from Toledo Bend and Sam Rayburn. Right now Sabine is more fragile than any other estuary on the coast so please be mindful of how you treat her. Keep enough fish to eat and let the rest go for another day. It will pay off in the long run.