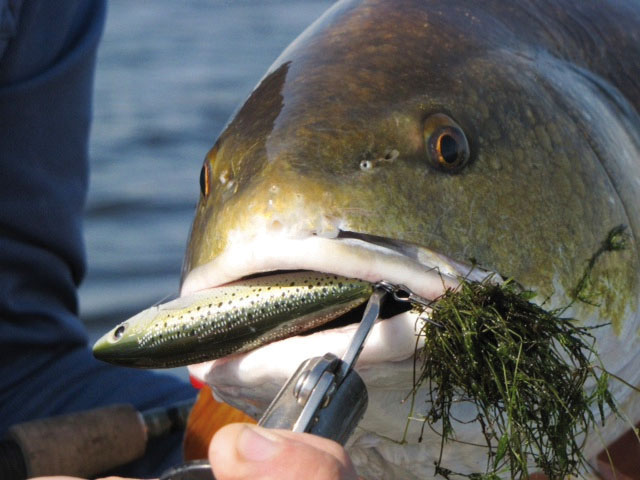 Finding hungry fish in less-travelled waters often means instant takes for anglers.
The launch was uncrowded and the temperatures were already starting to climb as Ron Begnaud and I prepared to head out in search of some willing marsh redfish. Begnaud lives in Lake Charles, Louisiana and is about as hardcore a marsh fisherman as you are ever going to meet. Many of our conversations begin and end with thoughts of new and unexplored regions of the marshes that border Sabine and Calcasieu Lakes. Finding a prime redfish pond that has no fishing pressure is like finding the Hope Diamond in a gumball machine; it probably won't happen but look out if it does.

Armed with aerial maps, topographical charts, fly rods and other associated gear we set out in search of parts unknown, at least to us. Our quest to find unpressured water was soon rewarded as the skiff coasted off plane and settled into the dark clear water of a large marsh pond. In an instant we could see wakes of cruising fish as well as the tails of some feeders. This place was full of potential and void of trafficwe had indeed found a jewel!

After a coin flip to decide who would take the poling platform, I got the honors of casting to the first fish. A small group of reds were gathered up and feeding intently as Ron pushed the skiff into range. At first I didn't know if I wanted to cast or make a photo; the redfish had their tails high above the water and they were backlit by the sun in an amazing display of red and copper.

Much to my dismay the camera lens was fogged from the temperature difference between the air-conditioned truck and the marshsummertime heat will do that. So with no photo option, I was "forced" to go ahead and cast.

The 7-weight fly rod loaded up and sent one of Begnaud's creations he calls "Ron's Red Chaser" flies directly at the feeding fish. The cast was accurate and the redfish were receptivethe strike was almost immediate.

The big fish took plenty of line as the others scattered and muddied the shallow water. The fight lasted ten minutes or so until the big red finally gave up. As Ron slipped the Boga Grip onto the brute's lip we both were amazed to see twelve pounds and the tape said thirty-three inches. An exceptional specimen for the marsh.

The day continued to be good as both Ron and I landed more redfish in our private little pond. The plan had worked perfectly and we were rewarded with great fishing and no pressure from other boats. As a matter of fact we never saw another boat anywhere close to our area, truly amazing by today's standards.

The effort we put forth to get away from the crowd is work that most folks are not willing to do. But that extra effort can mean the difference between simply fishing and great fishing.

In almost every coastal venue there are out-of-the-way places that receive little or no pressure; hidden treasures that many folks only dream aboutthere for the taking by those willing to explore.

The day ended with a bang as Ron landed the final redfish and we headed for the dock. The endless maze of grass-lined canals convinced us that another trip would be made soon. Even though we had found a great new place to fish both Ron and I knew that surely there must be others in the same area. Over the hum of the Yamaha we agreed we needed to study the satellite imagery and plot some GPS waypoints. A man could make a lot of mistakes in that country if he didn't do his homework first.

One of the most helpful tools any fisherman or outdoorsman can use is Google Earth, TerraFly, and others like them that offer ridiculously detailed photos and mapping options that enable you to do some quality scouting while in the comfort of your own home. I have personally used these sites hundreds of times to assist in planning both fishing and hunting adventures. My son Hunter and I have made our way in the dark to plenty of ponds that we had never hunted using the satellite map function on my IPhone. It's just incredible what we as outdoorsmen have at our disposal now.

The days of running areas and learning through "hard knocks" are luckily a thing of the past for us. How well I remember running tiny bayous deep into the marsh, believing there had to be a "magic pond" at the endonly to spend the next couple of hours of digging and pushing to get my boat un-stuck when the bayou abruptly came to an end. Not anymore, I consult the satellite photos before I ever take off on a re-con mission because I'm too old and fat to get caught out there high and dry. Like Clint Eastwood said, "A man has got to know his limitations."

Locating a potentially high-quality area via satellite imagery is a big piece of the equation but there is still work to do to insure successand you have to go out there and physically do that part of it.

Understanding how an area lays out, how it is affected by the tides and other factors cannot be gauged with any certainty unless you actually go check the area out. Spending time just observing or investigating potential areas is where anglers often separate themselves into the groups who are consistently successful and those that occasionally do well. The tiny nuances such as types of vegetation present and actual water depths can only be verified firsthand.

We all wish there was a "magic option" that would allow us to just go out and catch fish without effort but unfortunately that option does not exist. In today's world where everything seems smaller and there are no secret spots anymore, it's critical to your success as an angler to do some investigating in order to find that overlooked area that could prove to be special.

Those places, when you find them, are to be held close and guarded with the utmost care. The feeling of going from search to discovery to success is extremely gratifying and makes all the effort worthwhile. If you are willing to take the time to do some digging you are already ahead of most anglers and well on your way to success.