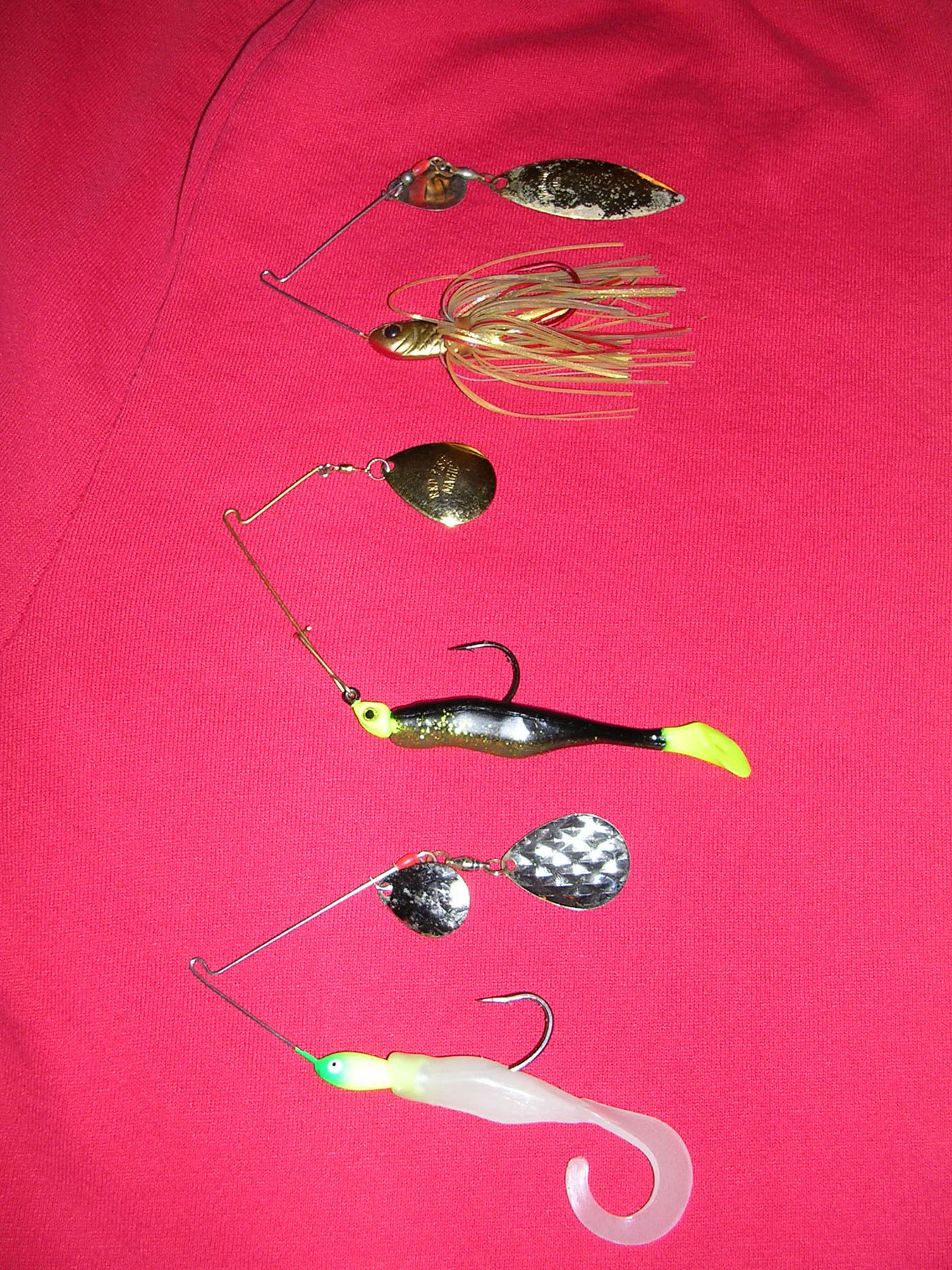 A proven assortment of spinner baits.
Here in Texas there are a few things that are common from Sabine to Baffin at this time of the year and everyone who calls the coast or saltwater home has an idea what those things are. Probably the biggest and most common factor is the wind associated with fishing in the spring; you just can't escape those big gusts that seem to come around every weekend. The wind is a constant factor and most anglers eventually figure out how to deal with the uncomfortable conditions. Some seek shelter in protected waters while others just brave the waves and tough it out. Now aside from the obvious comparisons about the wind the other common factor that plagues anglers during this time of the year is muddy water. Nothing will keep the weekend angler at home like off-colored water. The misconception about not being able to see in the dirty stuff has cost many a fisherman a good day on the water.

A good friend of mine, Mac McCune, who happens to be in the business of managing freshwater lakes, opened my eyes about so-called muddy water one day while we were fishing Sabine Lake. We were about halfway across the lake heading southeast towards an area where we had been catching some pretty respectable fish. As we approached I could see that the runoff from up north had begun to work its way down the lake and the water that only days before had been so perfect now looked like a stale Yoo-Hoo poured on a brown paper bag.

Mac could tell I wasn't real happy about the hand we had been dealt so he asked me what was wrong as we continued to search the area. I explained about how the water clarity was terrible and no self-respecting trout would be anywhere close to this ugly water. Mac calmly reached down into the cooler, found an empty clear plastic water bottle, dipped it into the water, and filled it up for examination. "This water isn't so bad when you look at it from the angle of the fish" he said as held the bottle up and peered through the sides. "It looks bad from where we are but you can actually see pretty well when you look through it instead of down into it" he added.

Sure enough, when you looked from the fish's viewpoint you could see much better than I first thought. That was a lesson I've never forgotten. We proceeded to catch fish in the very water I had been ready to give up on just minutes before.

Now muddy water has its own particular personality and certain adjustments will have to be made in order to be successful. One benefit that muddy water presents at this time of the year is that it will be warmer than clear water on average. The suspended particles in the water will absorb the sun's energy, and it will be warmer. This holds especially true on outgoing tides where warmer water exits marshes and shallow flats. Places where the warmer, off-colored water enters a bay or lake are magnets for predators as they often hide on the color change or streak and ambush their prey. The great thing about a situation like this is that there are tons of places where you can make this pattern work for you because every bay system has plenty of drains where the water moves during tide changes. These places can produce some amazing fishing and the crazy thing is that it can be so predictable.

One winter on Sabine we keyed in on a small stretch of shoreline that had 6 or 8 drains where water entered and exited the marsh. While wading, we could feel the temperature difference in the water on the outgoing tides and that was all we needed to know as we started to put the pieces of the puzzle together. Soon we were in one of those freak stretches where you could do no wrong and you felt every cast was going to produce another big fish. It was obscene how many fish came from such small areas as they just stacked up in the mouths of these little ditches where the murky water met the clear. I have vivid memories of those trips and it still makes me shake my head when I think about it.

Well now that we have conquered our fear the muddy and the murky let's get a handle on what types of baits will best produce under these particular conditions. One lure that is gaining mass acceptance in saltwater and really shines in muddy water is a spinnerbait. The vibration from the blade is an attractor that helps fish key in on it. Varied retrieves with erratic movements will trigger vicious strikes from all species of gamefish. Redfish have been targeted the most by spinnerbaits but speckled trout and flounder will crush them just as fast. The spinnerbait allows anglers a wide array of presentations as well as the opportunity to cover plenty of water in short fashion. The preferred model in muddy water would have to be one sporting a single Colorado blade and a soft plastic paddle tail for extra vibration. This combination works well under these conditions.

Another bait that also comes from freshwater and is gaining acceptance is the crankbait. Small short-lipped models like the 1-Minus from Mann's Bait Company are right at home in the murky stuff. The wiggle and vibration team up to produce a fish catching marvel, these baits really produce. Other proven offerings would include topwater plugs and soft plastics with paddle tails. Darker colors seem to work best for me but could just be my security blanket if you know what I mean. I believe the biggest factor is noise or vibration so the fish can key in on the bait when it's tougher to actually see the bait.

Two of the biggest trout I ever caught came from some of the worst looking water I ever fished so you can understand why I believe that you can have success even when the water color or clarity is not the best. The biggest obstacle is convincing yourself that you can actually catch fish in places like this and really giving the area a chance. Once you get over the mental hang up associated with, "I can't see in this water so there must not be any fish here," you will undoubtedly become a better fisherman.