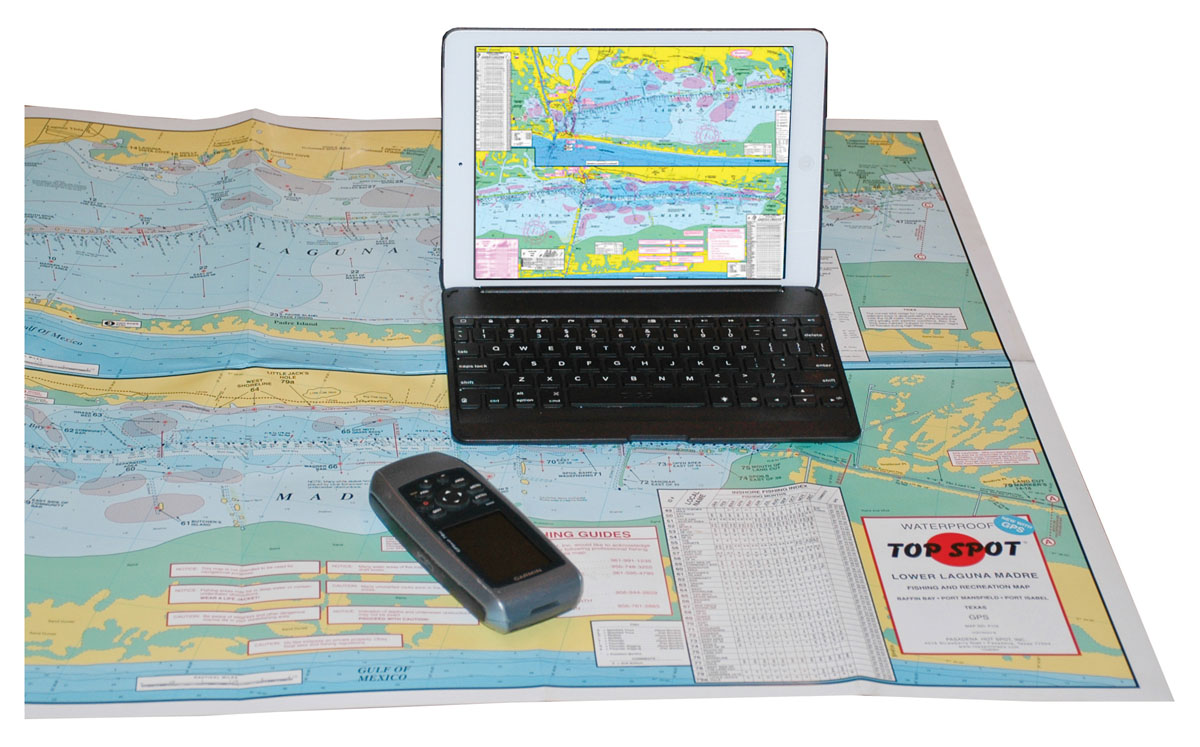 A trip to any new bay or body of water should begin with a GPS and studying a quality fishing map of the area.
In some ways it seems the world becomes a little smaller every day, just a bit more crowded. And then there are times when everything feels wide open, with plenty of space to roam. Welcome to Texas!

Even when it feels that everything is closing in, the Texas coast still presents exceptional opportunity for those willing to do a little homework and put on a few miles. Destinations from Sabine Lake to South Padre, and all points in-between, offer saltwater anglers any number of prime opportunities. For many anglers the thought of attacking a new body of water is a tad daunting while others readily embrace the challenge. Just like everything else, there are right ways and wrong ways of going about this task.

In the past few years it has become much more common to field calls and emails from anglers who want to come to Sabine Lake or Calcasieu and "do it themselves." I truly appreciate the fact these anglers are willing to venture off to a foreign body of water and try to solve the puzzle on their own, and for years I wondered how some of the more successful tournament anglers could move from bay to bay and consistently end up high on the leaderboard.

The thought of keeping up with fish catching patterns on multiple bodies of water seemed like a ridiculously difficult task to me, but somehow these top-end anglers managed to do just that. Eventually I understood how they were able to pull off the feat; they asked the right people the right questions and eliminated unproductive water in order to maximize their available time.

Very few successful anglers ventured into a new bay without having some sort of idea or plan that would help them locate fish. Most of their homework was done well before their boat ever touched the water and that's exactly how even the average angler should approach a new body of water.

I know we have all had those conversations, either in the boat or just hanging out with other fishermenwhich bodies of water we would like to go explore and learn next.

Upper Coast folks dream of the Laguna Madre or Baffin while the South Texas anglers wonder what it would be like to spend time on Galveston, Sabine or Calcasieu, for a few days. Well there is no time like summer to make a road trip to a new venue and see just exactly what all the fuss is about. Before you go though, it would be wise to do some reconnaissancehomeworkthat might insure the difference between a memorable trip and a busted weekend.

It's always a great idea when venturing to a new body of water to take advantage of some local knowledge. Hiring a guide is perhaps the best way to gain a crash course in a short amount of time. If you choose to hire a guide, be honest with them as far as what you are looking for. Remember the day is more about learning the water than actually discovering where they have been fishing because this type of information is far more valuable than any limit of fish.

Many of my customers bring maps and/or GPS in order to take notes or make waypoints for later use, and I'm OK with that. Basic, safe navigation should be the highest priority. Learning where you can and cannot run is usually the first thing most folks want, or should want, to know.

Your more adventurous anglers may point to their GPS and say they have all the navigation assistance they need. Just remember though, things can change quickly out there on the bays, and GPS can be next to worthless for identifying underwater obstructions, water levels as pertains to seasons and tides, and other variables.

Years ago I saw a brand new high-dollar bass boat capsized on an open water hump at Sam Rayburn. The guys were from California and were pre-fishing an upcoming tournament. Their boat was equipped with the best GPS of that era, but with no way of knowing the lake was more than 10 feet lower than normal level. Hence, the 10-foot-deep channel they thought they were heading through (that is how it was marked on the screen) turned out to be all but dry. Very scary lesson learned and fortunately nobody was seriously injured.

Besides basic navigation it's always good to learn what type of structure is most productive at given times of the year. Don't ask the guide for exact coordinates to his or her favorite reef, rather, ask them about general areas and patterns, instead. If all you have are coordinates to structure that was productive a season ago, you will more than likely arrive to find no other boats working it, or fish to be caught, either.

Whereas, obtaining a general report of recently useful patterns; depth, structure types, etc.; you can be well on your way to a successful outing and the knowledge you gain will be invaluable should you decide on making another trip. I cannot emphasize enough how helpful a map is when quizzing the guide or other knowledgeable locals. Marking up a quality map with navigation notes and other tidbits they are willing to contribute can be invaluable to any angler on a new body of water.

Now that you have a basic idea of navigation and a maybe few landmarks as well to choose from, take notice of the wind and what it will likely do to certain areas. Nobody wants to make a long trip to a new body of water only to have the target area blown out by wind from a bad angle. Many times, wind from a particularly undesirable direction will render an entire bay system next to un-fishable. On Sabine, we hate to see big southwest wind because it just tears up the water on the east shoreline where the all the marshes connect to the lake. Other bays have similar problems with winds from their own specific directions; it pays to know what's favorable and what's not.

Other elements of local knowledge that will come in handy are lures or baits of choice. In salt water, the mystique of one particular color or specific bait being the only one that will produce is drastically overrated compared to our fresh water counterparts who tend to go absolutely berserk over this. I know freshwater anglers that have color charts for lure selection that would make Sherwin-Williams envious. Saltwater anglers tend to be more practical. More often than not, in saltwater angling, we find technique and presentation to be far more valuable than matching colors to the tee.

I watched some local guys, one time down in southeast Louisiana, absolutely vacuum a stretch of shoreline using a small rattling cork and a mid-size soft plastic. Our boat had just fished the same stretch of water, like Texas guys often do with topwaters and swimbaits, and managed only a few bites, while these guys followed right behind us and nearly had to beat the redfish away from the boat. Their technique (we did not try rattle corks) and lure selection was the difference and we quickly adapted after being taught a valuable lesson.

Another bit of local knowledge that also helps is where to locate live bait if you need it. Most bay systems have tackle or bait shops that provide everything from live shrimp, mullet and croaker, while in other places those selections are scarce. On Sabine we routinely catch our own bait with a cast net and the preferred live offering is one of the several species of shad that are so abundant. An angler who can handle a cast net really has an advantage when it comes to gathering some live bait for either fishing or chumming. Most local folks know where to go if they need to catch some live bait and that's an important bit of information, especially if there aren't any bait houses around.

Anglers who take the time to learn all they can about the water they want to fish before they launch their boat are light years ahead of the ones who just take a shot in the dark and hope for the best. By reading articles about certain areas, attending seminars given by guides from that area, searching for credible reports either in print or electronic, visiting local tackle shops, or just giving a guide a phone call or email, you can acquire tons of useful information that will put you farther down the road to success.

Most folks would be amazed at how helpful most anglers can be if you just take time to talk with them and ask a few of the right questions. By perfecting a pattern of finding out where to fish, how to fish, and when to fish; you can quickly graduate from tourist to traveling angler, and not be afraid to try new venues. A little bit of leg work before the actual trip will pay off in the end and make those road trips well worth the effort.