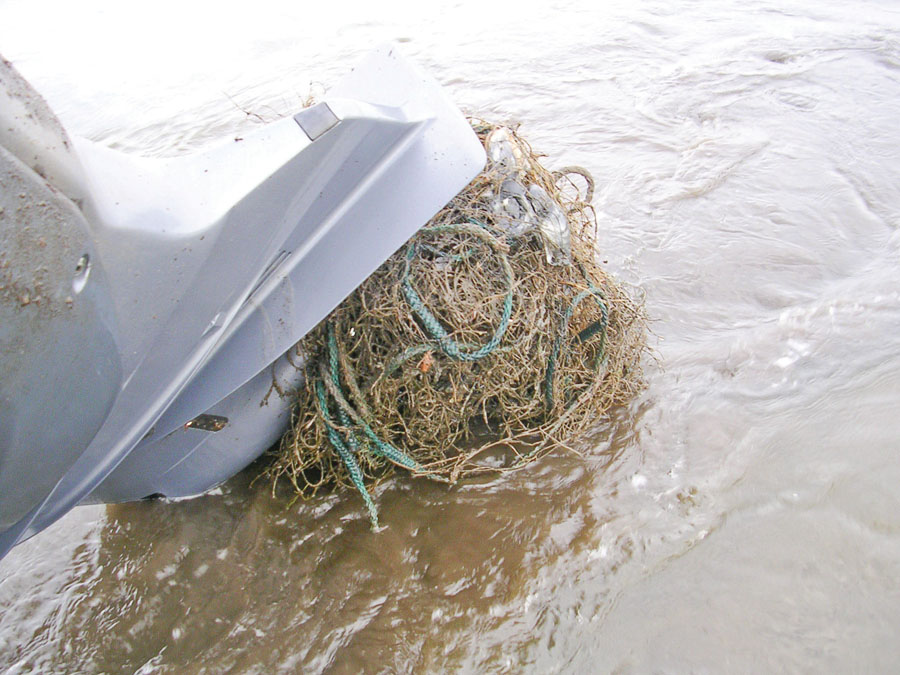 Cruising a backcountry marsh lake, everything going your way, and then…
Sooner or later it happens, the unexpected becomes reality and we are suddenly faced with some difficult decisions that test both our knowledge and common sense. Boat owners and fishermen seem to run into these situations about as much as anyone I can think of. Your day on the water is a constant process of choosing between success and failure and learning to cope with each in whatever amount is served up. Over the years I have certainly run into my fair share of unplanned events, mishaps, and scary situations as well as stumbling upon some crazy-good luck in the process. Looking back on some of these episodes I can honestly say the things I learned helped me become a better fisherman and a better guide, as well. When it's all said and done, learning "what not to do" is often times as important as learning "what to do."

The vast majority of problems or issues that come up on the water can be resolved with a little common sense. For whatever reason though, and I have no idea why, catching fish seems to deplete the common sense tank for many folks and they begin to get greedy and even a bit reckless. A prime example occurred during a rough day on the water in November. Despite a stiff breeze that had the bay rolling pretty good, my party and I decided to at least take a look at the open bay and see if we could fish in the tough conditions. Our efforts were rewarded for about an hour or so as we bounced between flocks of gulls hovering over schooling trout and reds. We had concentrated on the only area that afforded reasonable protection from the wind and that too finally gave way making the conditions much too uncomfortable (or safe) to fish in, so we headed for the protection of the Sabine River.

On our way we spotted another boat with a guy waving a homemade distress flag. You guessed it, a stalled-out boat and he needed a tow. As bad as I wanted to get to the river I couldn't leave the guy out there so I pulled alongside to offer assistance. The gentleman was very thankful and told us we were the only boat he'd seen all day. Now this is where it got crazy. Towing him to the dock, we ran into a flock of gulls working over a school of hungry specks and the guy being towed started screaming for me to stop and fish. I told him we were heading to the river to get out of the wind and we'd drop him at the dock so he could get his boat on the trailer. In that moment the guy decided to go for fish instead of taking the ride and untied the tow line. "I'm good right here," he said. "Thanks for the tow!" I just shook my head and left when he declined our second offer to continue towing him in. You just can't fix stupid.

On another occasion I had two retired gentlemen, each had been a commercial pilot for a big airline so they had plenty of good stories and were very enjoyable to have in the boat. On this particular trip we were chasing redfish way back in some remote sections of marsh and having a great time as the fish were plentiful and cooperative. At this particular time, pre-smart phone, I noticed some weather beginning to build to the south. As we continued along the shallow shorelines I couldn't help but be concerned as the weather appeared to intensify, moving toward us at a rapid pace. By the time I could crawl down from the poling platform the lightning was working its way across the prairie and I knew we were in trouble. The water we were fishing was so shallow there was no place for us to try to get the boat up on plane and run to a safer location so we pulled up on the bank, got out, and braced for the worst. The storm was intense and the lightning was all around us for what seemed like forever. I have no problem telling anyone I was curled up in the fetal position in some marsh grass praying it would stop. The funny thing was that my two guests were sitting up watching the show and having a great time. I guess after flying big jets through storms like that for years this was just a walk in the park. A couple of times I happened to look out across the flat we were fishing before the storm hit and to my surprise the redfish were tailing all over the place and didn't seem to be bothered at all by the lightning and thunder. Eventually the bad weather passed and we went back to fishing and trying to dry out. To this day I am much more mindful of approaching weather and have no problem changing my plans to accommodate the conditions.

Besides weather events, other things pop up that force you to deal with them. One of the more dreaded ones has to be someone getting a hook stuck in their flesh. Most of the time when a person gets stuck it will be in the hand or forearm while handling a fish. I've had several of these occur and they are never fun. One of the things that shocks so many people that get stuck is how unbelievably tough your skin is. The conventional wisdom of trying to push the hook through your skin in order to cut the barb off and back the hook out sounds great, but it's nowhere near that simple.

I have found that the best way to remove the hook is to first separate it from the lure or terminal tackle so that only the embedded hook (and no others) have to be dealt with. Make a loop of strong fishing line and pass it over the eye of the hook, and up to the top of the bend of the hook's shank. It is very important to follow this step to the letter if pain and discomfort is to be avoided. Most importantly the loop of line must be at the barb end of the hook bend, and the pull must be up and away. Do not place the line at the back of the bend or in the middle of the bend, this will only result in the barb catching and causing pain when pulling. Once you have your line situated, push down firmly on the eye of the hook so the eye touches the skin. With a sudden and strong yank on the line loop, pull up and away from the hook-eye. The hook should come out the way it went in, and because it will curve out the same way it went in, the barb should not catch. I have pulled numerous hooks with this technique and it works great.

There is no practical way to be 100% prepared for every situation that comes up when you are on the water but you can certainly put the odds in your favor. By taking into account the most common "UH-OHs" that boaters and fishermen face, you can put yourself well ahead of the curve. A few simple precautionary measures will often be more than enough to keep you out of trouble. A first aid kit, a few tools, a set of dry clothes or emergency blanket, a handheld VHF radio, and communicating to others about where you plan to be are all great preventive measures. Some folks go even farther with their preparations by also carrying spare props, batteries, spark plugs, fuel-water separator filters or other engine related fluids. Boaters still running two-stroke motors are always encouraged to carry a jug of spare engine oil as well. If you can manage to cover the majority of your bases you can relax and worry about fishing decisions instead of accidents and maintenance issues, which translates into a much safer and enjoyable experience.