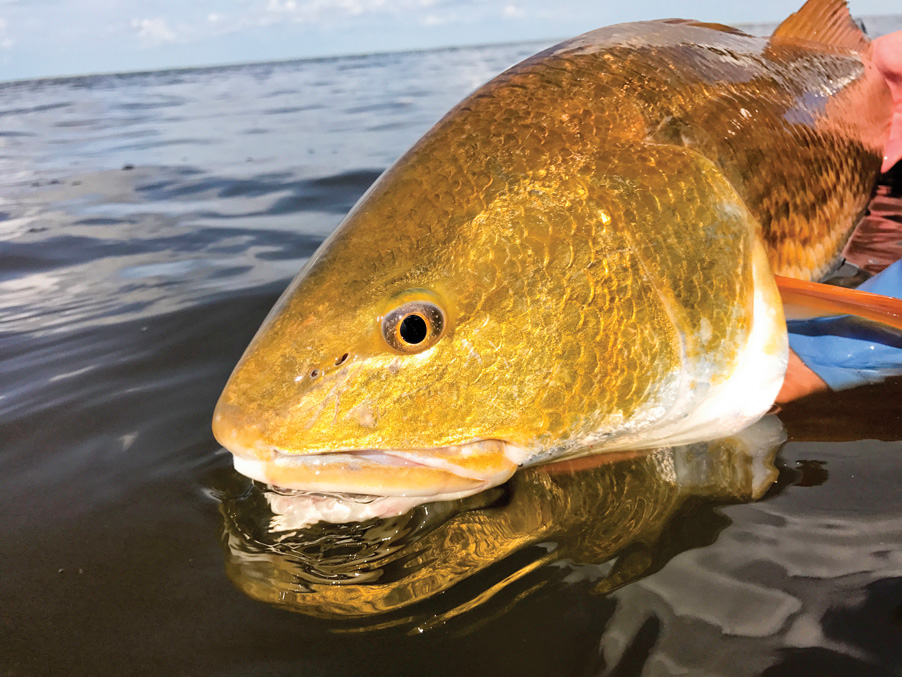 Long about midday, when Sabine Lake gets flat as bowl of mercury, we look for surface explosions as schools of redfish gorge on shad.

“Careful what you wish for, son…you just might get it!”

Things that seem such great ideas at the time often turn out to be greater nuisances than the situation you were in when the thought occurred. For months, Texas anglers, me included, totally fed up with daily high winds, prayed the wind would lay and allow the bays to become more user-friendly. Well, the winds have subsided and the temperatures have just gone through the roof. It is almost impossible to spend an entire day on the water without an ice chest the size of a Peterbilt stocked with refreshing liquids. As the mercury continues to climb fishermen will need to make adjustments in order to combat the heat and come out a winner.

Easily, the most reasonable option is to go early or late and avoid the midday meltdown. For some time now Sabine anglers have been making pre-dawn treks to the jetties and just having their way with quality fish. This pattern is both solid and exciting as the action on good tide changes can be non-stop.

The topwater bite along the rocks is as vicious as you can imagine and only magnified when it happens in darkness or very low light. Once the sun breaks the horizon you can switch over to shallow running crankbaits or stickbaits and continue the assault until it plays out when the sun gets higher. On toward midmorning, the bite usually slows considerably, making it tough to continue grinding under the beaming sun.

Anglers who use the inverse pattern – heading out at sunset and staying until after dark – will also get their string stretched when the bite cranks up again as the sun goes down. Fishing in the dark requires some preparation and more attention to detail than during daylight hours. Everything from fish to boat problems are magnified in the dark so plan accordingly and take all necessary precautions to stay safe.

Boaters are not the only ones who take advantage of darkness during summer – wade fishermen adopt the same strategies. Being waist-deep for a pre-dawn wade across a protected flat under the right water conditions can be the stuff of legend. The potential for a truly big fish hangs thick and controls every thought and action.

Once the silence is broken by that first vicious strike and subsequent thrashing on the surface, all that’s left to do is settle in and enjoy the moment. That magical hour or two before the sun gets well up is well worth the effort it took to reach that destination. Some of the best trout I’ve ever seen caught were taken in the pre-dawn hours by wade fishermen. The same as boat anglers who head out later and stay past sunset, waders will do likewise and find their fair share of good fish.

There is something extra special, the way the water calms down as the boat traffic dissipates and the light begins to fade, the fish become more active and begin to feed more aggressively. By taking advantage of the reduced traffic and better feeding conditions, anglers can beat the heat and increase their odds exponentially of tangling with a big fish at the same time.

Now, if a dark-thirty stealth mission is not your idea of a good time, you have other options, too. For years we have made great use of the deepwater patterns in the Sabine and Neches Rivers. During the summer months, the runoff from Toledo Bend, Sam Rayburn, and all the other miles of watershed area, becomes minimal and saltwater begins to creep farther up the rivers. When these conditions exist those who know how to take advantage of them are often rewarded with some of the easiest and most productive fishing possible.

It’s tough to beat live bait when this pattern develops. Most locals use a cast net to gather live shad and fish them on Carolina rigs along the breaks and depth changes. Underwater structure that causes eddies or current rips will concentrate big numbers of both speckled trout and redfish into relatively small zones. Being precise as to where you anchor in proximity to the depth change and current is critical and your depth finder plays a vital role. With the boat positioned where your baits will be swept into the feeding zone rather than away from it, you can relax and enjoy steady action.

This deepwater pattern is a favorite of mine. I have spent many days dunking shad with the boat anchored correctly on structure, and catching as many or more fish as the folks running by me headed for the open lake. This program works and is so easy that it’s almost funny. Another great way to beat the heat.

Well, so far we have discussed how to stay out of the heat and still catch fish, a common goal for most anglers this time of year. But, there is still another, although I must say it is not for the faint of heart or health. If you can stand the heat you can patrol the open lake about midday when a great number of anglers are heading in to find some air conditioning.

Many times during late-summer heat, long about early-afternoon, the lake will just turn as flat as a bowl of mercury. Even the least surface commotion can be noticed from a great distance. Often times the shrimp will get bunched up and the speckled trout and redfish will go on a vicious feed, all the while giving away their location. It’s during these times a careful angler can stay with a group of schooling fish for a long time.

And shrimp aren’t the only species that headline the midday buffet. Quite often we see shad and pogies getting hounded by huge schools of oversized redfish. Heat or no heat, this is a party you do not want to miss. If you have never witnessed the carnage during such an event, you are in for a surprise. Those big reds will blow holes in the water that defy description, and any bait tossed into the melee is sure to get hammered as soon as it touches the surface. Anglers willing to brave the temperatures and spend a little time looking around can usually find an active school of fish that will keep them busy for as long as they want. And, with temperatures creeping close to triple-digits, it doesn’t take long to get your fill.

Now that you are armed with options for beating the heat, you can take your pick and enjoy any or all of them. Regardless of which pattern you choose, please take proper heat precautions. Cover up and stay hydrated. Should you begin to feel queasy or nauseous, do not linger in the sun. Many times it’s not until after the trip before you really feel the effects of a day in extreme heat.

Enjoy the consistent weather pattern and the great fishing that late-summer presents. It is truly a great time of the year to be on the water.