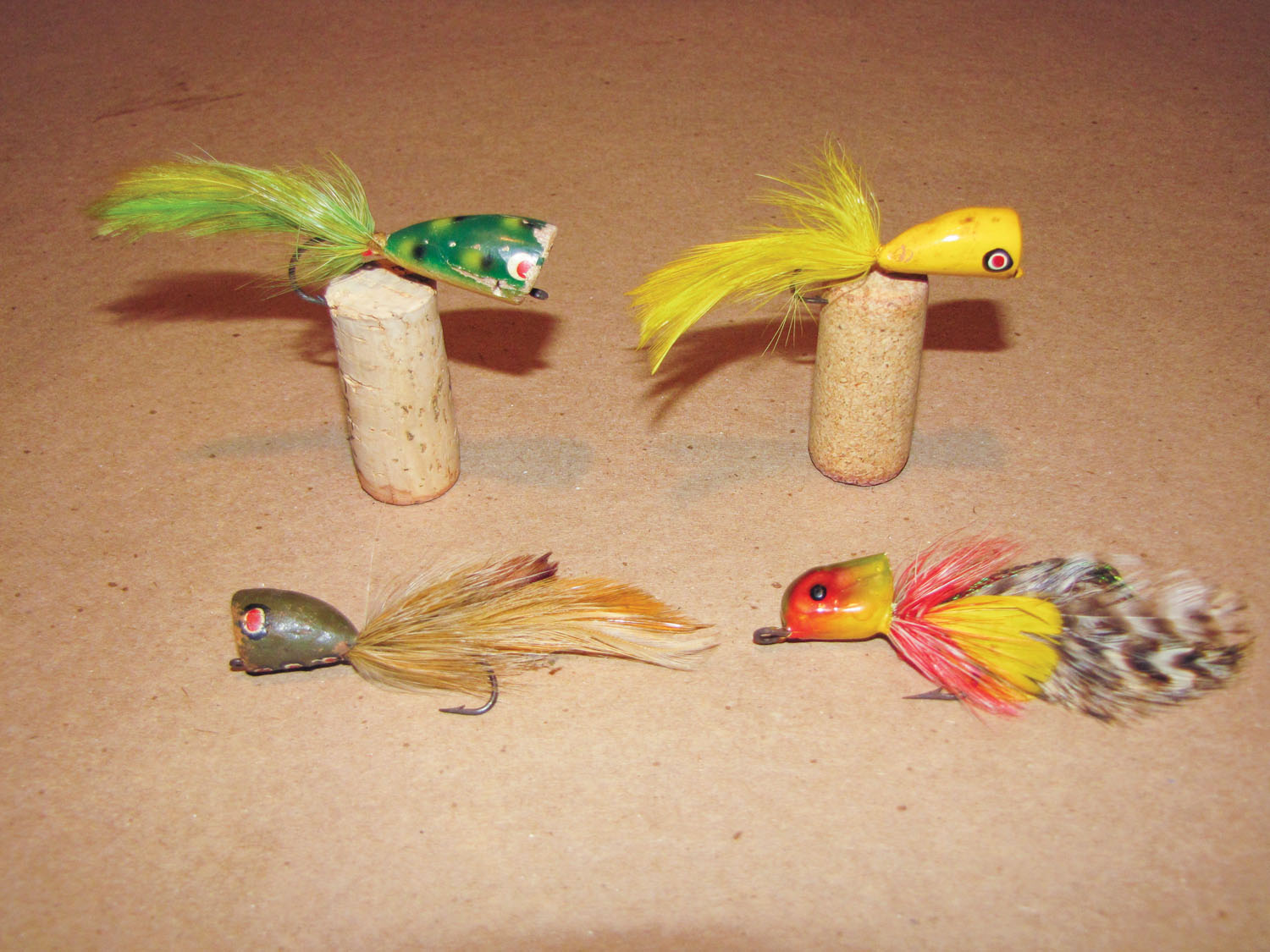 Popper flies from my granddad’s collection of 60 years ago, priceless treasures that kindled my own fly-fishing interest.

If asked to name a good old-fashioned rivalry it probably wouldn't take but a few seconds to rattle off several famous ones. In the category of family rivalries, none can top the legendary and bloody Hatfield-McCoy feud. These families held epic grudges and hatred towards one another like no other in American history. Sports rivalries also come quickly to mind. Right here in Texas, few are as longstanding and tradition-rich as the Longhorns and Aggies.

The outdoor world is filled with great rivalries as well. In deer hunting, rifle hunters and archery enthusiasts debate endlessly to prove which requires greater skill and offers the greatest sport and overall outdoor experience.

Fishermen who prefer live bait seem forever at odds with their lure-slinging counterparts and vice-versa. Legend holds that when fanned white hot, this difference of opinion has been known to erupt into bait camp and launch ramp brawls.

Differences of opinion between boat fishermen and anglers who prefer to wade sometimes get out of control, each with its own boisterous fan base that are not afraid to speak their mind, literally and figuratively.

Here on Sabine Lake we have the Texas versus Louisiana thing that always ruffles feathers, especially when bag limits and licenses are part of the discussion.

Another great divide amongst sportsmen that often runs deep but not quite as volatile is the rift between conventional-tackle anglers and fly-fishermen. Each side, for whatever reason, harbors preconceived and stereotypical notions of what the other side represents, and I live right in the middle.

I was recently invited to speak at one of the monthly meetings of The Texas Flyfishers of Houston and I brought up the legendary "Us v Them" scenario to see where that topic might lead. Most if not all in attendance agreed that in order to promote the sport of fly-fishing it is a must for all fly anglers to endeavor to do a better job of recruiting conventional anglers to the sport. The only way the sport grows is to bring in more people who enjoy the same outdoor pursuits, even if they use different methods. The common denominator between the fly fisherman and the conventional angler is that each one wants to put a bend in their rod with a fish on the other end. Period.

I personally take great satisfaction in introducing new anglers to the sport of fly-fishing and I have been successful in accomplishing this for many years. The initial fishing experience is critically important because, like the saying goes; "You never get a second chance to make a first impression."

With that thought in mind I usually wait until I have the best set of circumstances and conditions before I even attempt the introduction. There are a couple of prime times to introduce a new angler to the sport of fly-fishing and few are better than late summer and fall when the fish gang up in big schools and eat just about anything that hits the water. The constant bites are just what the doctor ordered so that a new angler can get a real feel for exactly what happens on the strike. I liken it to teaching someone to hit a baseball and putting them in a batting cageit's no big deal if you miss one when there is another coming right behind it. The last thing I want to do is ask a new fly-fisherman to stand on the bow, make 1000 casts, and not get bit. Talk about leaving a bad taste in a new recruit's mouth!

On most occasions I wait until we have a good setup and a school of fish that isn't going anywhere before I break out the fly rod and offer up a little encouragement. Knowing that the fish aren't going anywhere anytime soon makes the whole experience much less stressful for the newbie and that much more enjoyable for me. Hungry school trout are exactly what the doctor ordered for the first-timer. Seeing accomplished conventional anglers pick up the flyrod and have success immediately is always fun. The look on their face as they discover a new style of enjoying their favorite pastime is priceless.

On a couple of occasions I've had beginning fly fishermen hit the "Texas jackpot" as I call it, a bruiser redfish comes in and crashes the trout party and then takes off with their fly to parts unknown. Watching the fly line peel off in the blink of an eye and then the backing begin to disappear often leaves the new fly angler with the wide-eyed look of simultaneous disbelief and exhilaration. Most new fly anglers are really happy to see their line leave in a hurry while attached to a redfish but that look quickly goes away once they realize a fly reel doesn't offer a 7:1 gear ratio for getting the line back. All the work that goes into landing one of those big redfish makes the memory of the adventure that much more vivid and serves to draw the angler back for more. It's usually not long after that when the new fly angler takes the plunge and purchases some gear and begins to experiment on his own. And so it begins, a new obsession focused on the same trophy.

Now in my little part of the world, between conventional and fly angling there is plenty of room and I encourage everyone to come and "visit." Neither style of fishing is the "be all-end all" version that surpasses all others. It's merely another tool or another club in the bag if you will, to enjoy the sport we love so dearly. I am perfectly happy and content to fish in just about any way, from soaking live bait, wading with artificials, or sight-casting plugs or flies in shallow water. All fishing is enjoyable to me and each method and style have particular advantages that help make me a better all-around fisherman.

As for the "Us v Them" that so often invades our sport, all I can say is that it is the worst thing in the world that can happen between outdoorsmen. Divide and conquer is a tactic often employed by fringe groups who are fundamentally opposed to outdoor pursuits such as fishing and hunting. And don't think for one minute that these whack-jobs won't try and go after sport fishing the way they have hunting.

Just because a sector or group of fishermen may not prefer the same methods and gear as you or me does not make any of it wrong, so long it is legal in the beginning. As a whole, fishermen should all support one another so that we can maintain a strong front and defeat any "anti" efforts that would take our sport away.

I'm not saying we need to hold hands for a big old Kumbaya on every issue every time; I doubt that will ever happen. I'm just saying that before you rule out a style or type of fishing you need to try it first. More often than not you'll be glad you did.