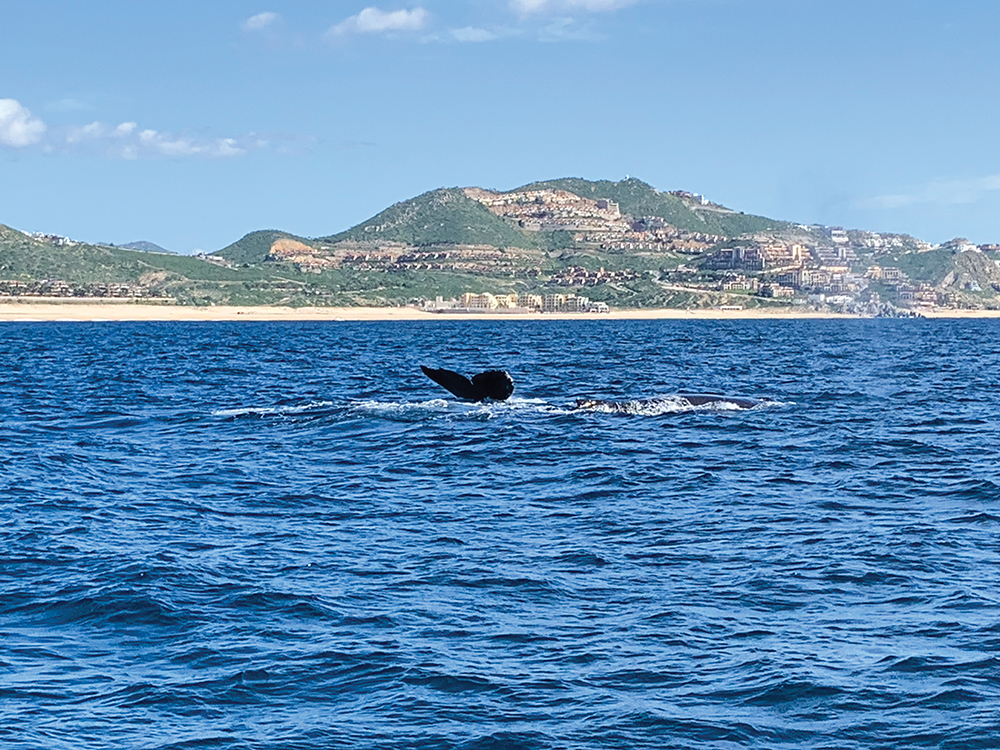 The whales along the Cabo shoreline were amazing.

For a number of years I have been visiting Mexico, vacationing mostly, and on nearly all these trips I have managed to squeeze in some amount of fishing. The Caribbean coastline has been my primary destination, until recently when I decided to visit Cabo San Lucas. Cabo lies at the tip of the Baja California Peninsula, surrounded by the Pacific Ocean on the west and the Sea of Cortez (Gulf of California) on the east. For years I had read of the different vibe Cabo offered and how amazing both the fishing and scenery were from friends who had been there. Images of rich blue water framed by rugged mountains and beautiful deserts were the ingredients that great stories and vivid dreams were made of.

The voice of the pilot startled me as we began our descent over the Gulf of California, with the Baja Peninsula  coming into view. The water was gorgeous and the terrain did not disappoint. The mountains rising in the distance were a reminder of exactly how amazingly rough and beautiful this place is. The scenic drives we made along the coastline north of Cabo left me speechless as the Sea of Cortez lies virtually flat until it crashes upon the beach – just like the postcard images. I was mesmerized and could not wait until I could experience it firsthand and there was no better way to accomplish this than wetting a line.

After a conversation with TSFMag editor, Everett Johnson, I settled on RedRum Sportfishing for my charter. Everett has been fishing with RedRum and the high marks he gave them boosted my confidence in booking with them. Learning that RedRum is an American veteran-owned business sealed the deal. Entering their office in the Cabo San Lucas harbor, I was greeted by second-generation owner-operator Ryan Donovan and his team. Together they make the whole outfit run like a top.

Donovan, I soon learned, is a classic fishing junky. He shared his story about fishing the California and Mexico coast with his dad as a teenager and how those experiences fueled his desire to continue that lifestyle. He actually has some Texas roots, having studied a few years in Fort Worth at TCU, so he had a good feel for some of the things we described. I also learned that RedRum helps sponsor a weekend fishing vacation for six lucky U.S. military veterans each year. They take care of the fishing, lodging, and overall good time for these well-deserving service men and women who participate in the event. Truly a classy gesture by this company and one that should not go unnoticed. Overall the initial visit did nothing but confirm all of the good things I had heard about RedRum.

My charter partners for the day were Bryan Burtsfield and Chris Burch, both from my hometown, and avid outdoorsmen. We met up with our Captain, Juan, and his deckhand, Omar, aboard the 28-foot TantRum and made our way out of the marina. One quick stop just outside the marina to pick up live bait from some local fishermen in a small panga allowed us a great photo opportunity of the famous arch that separates the Pacific from the Sea of Cortez. After a few minutes of admiring the famous landmark we turned the corner and headed north to the fishing grounds.

It took very little time for the first line to go off and that was followed closely by the second as a pair of solid dorado leapt from the water. This pattern continued throughout the day as we stayed in 70- to 100-feet of water and scanned the horizon for frigate birds and surface activity. Our greatest flurry saw four rods hooked up simultaneously, which created an absolute rodeo in the cockpit. Deckhand Omar did a fantastic job keeping the whole thing from getting out of hand while Capt. Juan maneuvered the boat skillfully. It was top-notch action and service all the way around from hook-up, to gaff, to filleting and packaging our fillets for shipment. I could not have hoped for and more in any category.

The great day we spent on the water did nothing but increase the desire for more, so that’s exactly what we did. A second trip was scheduled with more of a sightseeing theme so our wives could enjoy Cabo the same as we had. For this trip we enlisted Cabo Sportfishing Fleet and took a very nice 32-foot Seadancer out with Capt. Alberto and Miguel. The knowledge of the area that Miguel shared with our group was truly interesting and was thoroughly enjoyed by everyone on board. Easily the highlight of the day was watching humpback whales as they cruised the shoreline. Several of these enormous creatures jumped and put on quite a show for us.  We followed several pods of whales during the morning and each time they surfaced it was a treat. Another trip in mid-January, when the really large numbers of whales make it into the area, is certainly on my bucket list.

Overall I must admit Cabo San Lucas far exceeded my expectations and ranks high on the list of places I want to return to explore and enjoy more thoroughly. The flight from Houston is an easy two hours and the hospitality in Cabo is first rate. I would highly recommend this trip to anyone looking for a complete package of both fishing and sightseeing because this place most definitely has it all.

Happy New Year to all our readers!