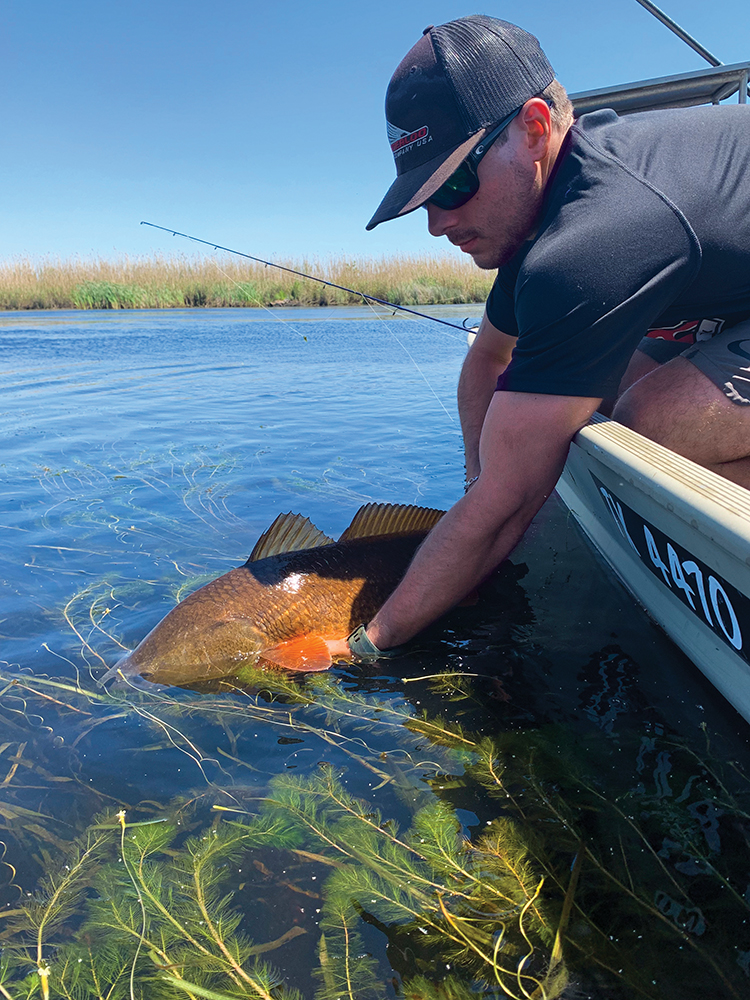 Taking time to revive them properly prior to releasing goes a long way toward their survival.

I’m guessing most everybody has heard the old Daryle Singletary song, Too Much Fun, where he sings about an imaginary situation… “A girl too pretty with too much class. Being too lucky, a car too fast.” Every once in a while fishermen run into days on the water when everything appears perfect – except the fish won’t bite.

Trout green water you can see your toes in; bait so thick you could walk across to the other side. Light wind barely ripples the surface and the solunar major is about to go off. Conditions such as these conjure up a great picture for fishermen from Calcasieu to South Padre and all points in between. All the right factors are in place and it’s only a matter of time until the whole place goes nuts. Fast forward a couple of hours and our angler who had everything going his way still has an empty stringer. What gives?

This scenario can play itself out many times during an angler’s career, especially in summer. During extended periods when rain and runoff become scarce and the water clarity gets so good it borders on ridiculous, many fishermen have a hard time catching fish. Upper Coast anglers especially struggle with these conditions because they are not anywhere close to normal for the waters we fish. In situations like these it pays to downsize your offerings, smaller baits are often just the ticket to get fish to bite.

For the angler who desires to catch a little bit of everything, big fish and numbers, the junior-sized floating plugs such as MirrOlure’s She Pup and Rapala’s Model 08 (baby) Skitter Walk can be tough to beat. The smaller profile of these plugs will catch more fish in clear water on a day to day basis than just about anything this side of a bait stand.

According to Texas Parks and Wildlife, surveys of stomach contents from both speckled trout and redfish reveal that the average size forage eaten by both species averages about three inches in length. Sure, trout and reds will eat bigger offerings, but they definitely seem to prefer smaller forage, and thus more likely to take smaller lures. For my own personal preference, I would rather throw the smaller plugs, they seem to give me better results all the way around on both numbers of fish and bigger fish. If you really think about it, throwing the smaller plugs makes plenty of sense, you can easily throw a bait that’s too big but it’s tough to throw one that’s too small.

The small plug presentations that really shine on the Lower Coast can be used just as effectively on any body of water. On Calcasieu, during the summer months when the trout are shadowing big schools of shad, you can bet the smaller plugs are going to produce. Many times I have seen fishermen save fishing trips by simply scaling their lures down one size. Get smart and back off the big plugs if you really want to tip the odds in your favor.

Speaking of tipping the odds in your favor, small offerings will also shine in the shallow water marshes that surround both Sabine and Calcasieu. For quite some time my favorite way to catch redfish in these marshes has been on a plastic frog. The frog offers a variety of options as far as techniques go and my personal favorite is the 3.5-inch Stanley Ribbit.

The Ribbit allows you to present it the same as a topwater plug or work it like buzz bait when you want to cover more water. In the event you spot a fish, you can swim the frog to them and let it slowly sink into the strike zone. A subtle twitch at the precise moment will induce ferocious strikes that will leave you craving more. The capabilities of the frog are magnified when it’s rigged weedless, the possibilities become endless and there is basically no place you cannot fish it.

At times the water in these marshes will be high due to abnormal tides or big south winds, in which case a conventional topwater will work wonders when presented above the normal mat of vegetation. The aforementioned MirrOlure She Pup and smaller Skitter Walk are right at home during these times. Not having to worry as much about vegetation when the water is high makes these shallow ponds a topwater fisherman’s dream.

Some of the strikes from oversized redfish can border on the ridiculous. The only drawback occurs when these fish get balled up in the vegetation and quit fighting – anticlimactic to say the least. In many cases the release of these fish is critical to their survival. Please take plenty of time to be sure that they swim away strong and don’t turn belly up after a few feet. Nothing is more disheartening than seeing dead fish on the surface after a boat just left the area.

One bit of advice that will greatly help reduce the mortality rate of shallow water fish is to use heavy enough tackle that allows quicker landings and greater overall strength when they are released. Ultralight gear, though more sporty during the fight, is not the best bet to accomplish this goal.

Recently I put my hands on the new Komodo KDS-273 baitcast reel by Okuma and it is just what the doctor ordered for this task. The Komodo is a perfect blend of finesse and horsepower wrapped up in nice clean package. The Komodo features outstanding drag and ergonomics as well as a high speed 7.3:1 gear ratio. In the short time that I have had to test this reel I have fallen in love with it and what it does. If you get an opportunity to check one out, by all means do it, they are awful nice.

Perhaps the early summer will treat us all to some decent weather and better conditions. The trout bite on Sabine is minimal at best and just a fraction better on Calcasieu, although both are showing some improvement. Small shad that will be targets for the predator fish have begun to show in greater numbers and that is at least a bit of good news going forward. Hopefully some pretty gulf water will breathe some much-needed life into Sabine very soon - it’s been far too long since she had a noticeable pulse. Until that happens, all we can do is continue to fish and explore because you sure can’t catch them at home.