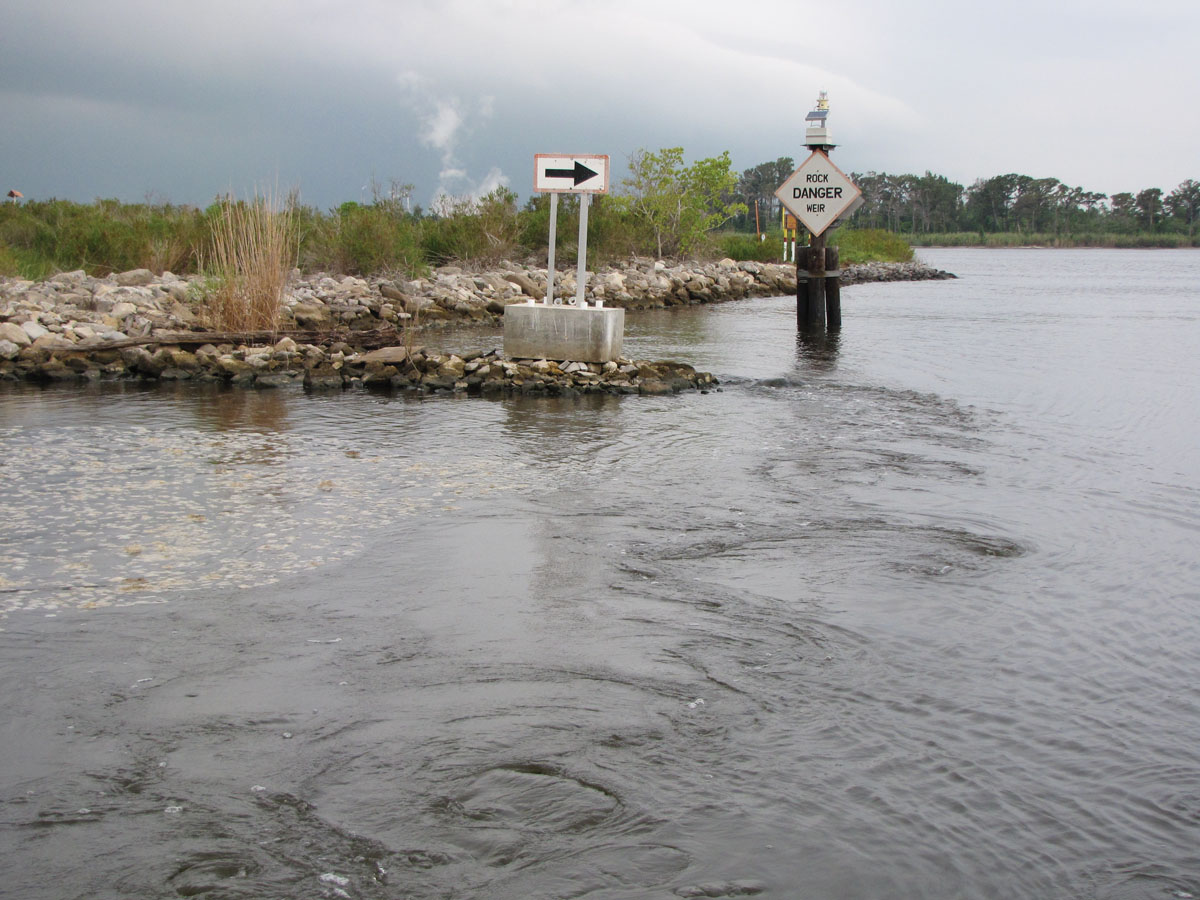 Note the eddies forming behind the rock weir, lots of opportunity here.

It is said that P.T. Barnum's crew would quietly post signs at the ends of the bleacher aisles under the big top as the show was winding down. The signs read, "This way to the great egress." The story goes that the stage crew was always anxious to get rid of the audience so they could prepare for the next event. And of course there was always some number not in a hurry to leave and that's where the signs came in. The hapless rubes would read the sign and stampede the exit, already outside the big tent by the time they figured out what egress meant.

Well like Barnum's great egress, the first hint of north wind will usher all sorts of life through the Sabine marsh exits and out into the open lake. Shrimp, shad, mullet and just about everything else that lives in the marsh will be escorted by the falling tide where plenty of predators will be waiting to greet them. These areas where the flow manages to leave the marsh and backwater regions range in size from broad sloughs and bayous to tiny ditches and wear the common moniker drains.

For as long as I can remember, Sabine Lake and Calcasieu fishermen have utilized these marsh drains like very few other bay systems. These egress lanes from the fertile marshes offer fishermen an opportunity to take advantage of concentrating the fish they are chasing since there are only a few ways in and out of these expansive areas. During the fall months, you can witness the carnage as white and brown shrimp just get pounded by everything from speckled trout to largemouth bass as they dump out the protected water. Smart anglers will often use this to their advantage as they anchor up and let the good times come to them. I can honestly say some of the most fun I have ever had while fishing came as I was on anchor at the mouth of one of the many bayous that dot the landscape of Sabine Lake. My good friend Sammy Nolan who passed away several years ago would come down to just buddy fish with me in the Sabine River where nine times out of ten we found ourselves on anchor pitching our baits into an outgoing tide and loving every minute of it. The sheer numbers of fish that gang up in these areas can be mind boggling, especially if you catch the conditions just right and find the spot where all the fish will stage.

You can't just run up to any drain and expect fish to just start jumping in the boat, no sir. Boat placement along with lure or bait presentation are still very critical factors. I had the importance of both of those points shown to me many years ago by TSF's own Dickie Colburn. It is very safe to say that there are not many folks who have logged the hours on both the Sabine Lake and River probing all manner of underwater locations and patterns like he has. On this particular trip we set up on an underwater point where a herd of redfish had been holding for a few days. Our initial set up was off the X by about 20 yards, so we never got the first bite. Being young and impatient, I was ready to head out for another location when Dickie picked up the anchor. Instead of leaving, we repositioned the boat on the opposite side of the point and immediately began to catch fish on virtually every cast. That small adjustment taught me a huge lesson, the difference between being a hero and a zero is often smaller than most folks realize. Since that day I have seen countless anglers pull up on different areas, be off by a boat length or two, and not have any idea how close they were to a fantastic day on the water. Knowing your location and being able to read your electronics is crucial but having the willingness to search out these areas is even more important.

Unlike the underwater nuances that are much harder to find or spot, these drains from the marsh are relatively easy to read. Current breaks like rocks or other structure that offer fish protection from the current or a place to ambush prey are keys to success. I saw this first hand as I watched in amazement while scuba diving in the Caribbean. A pack of snapper sat in the eddy formed by the current going over a reef; I mean there were so many that you couldn't get another fish in there if you tried. I often think about all those fish huddled in one small space when I fish the deeper water of the river and Intracoastal, knowing full well that in certain areas the trout and redfish can be that thick as well.

Now as we make our way into the last quarter of this year the opportunities for taking advantage of these marsh drains will increase with each passing cold front. The first ones in late September and early October will turn Sabine Lake on like a light switch. Plenty of schooling action will available as tons of shrimp will hit the lake. Most folks know when it's about to happen as the shrimpers begin to stage up in the bayous and surrounding waterways. You can bet the folks in Louisiana will have the butterfly nets ready to drop when the marsh starts to empty, the amount of shrimp brought in on some of the docks at a few duck camps will blow your mind. Those first big pushes when the water empties out are almost like national holidays for some folks. The thought of sitting on your own dock and letting pounds and pounds of shrimp drift into your net while you watch is about as good as it gets for some.

For many anglers the fall means different things. For some it's the flounder run, for others it's the crazy schooling action under the birds or some other time-honored pattern. Regardless of which category you fall into these marsh drains are a vital part of the program. Learn how to fish them correctly and take advantage of them because they will certainly make your time on the water much more successful.