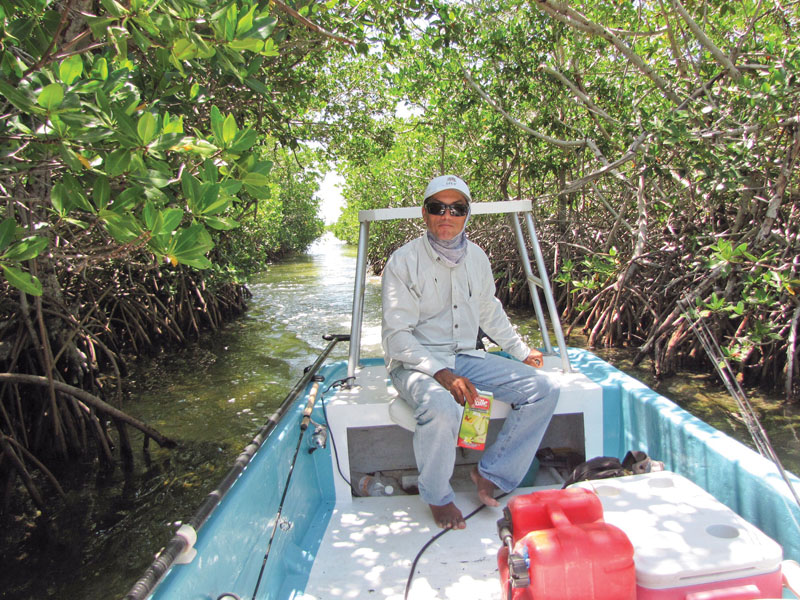 Even in Mexico’s remote coastal villages “fishing” is spoken universally.

Close your eyes and imagine this, if you can: High-profile guide, decked out in the latest up-to-the-minute gear including stealth mode clothing that makes him invisible and able to intercept even the slightest brain waves of any and all fish within a 300 yard radius of his satellite verified location. In the guide's hands are a pair of rod and reel combos that together nearly add up to a down payment on a twenty-year-ago starter home. Slung over his shoulder is a huge box of lures that would make most any self-respecting tackle dealer green with envy.

In one smooth motion the guide gives his two anglers for the day, who are standing on the deck of the boat totally agape, a series of semi-intelligible verbal instructions and hand signals akin to a NORAD top-secret emergency launch code. As the final words fall upon the stunned angler's ears, the guide exits the boat and begins firing casts that land just short of Cuba. The anglers look at one another and immediately bail out, trying their best to mimic their hired host.

For the next eight hours the bewildered anglers stumble around in a mental fog while watching the guide have the time of his life. The final insult comes when the guide actually asks one of the anglers to snap a photo of him with his fish so he can post it anywhere and everywhere that will accept his cyber offering. At the end of the day a stringer of fish gets cleaned and filets go home with bewildered clients, who still aren't exactly sure what just happened.

OK–so that account is highly fictionalized and includes a good deal of sarcasm–but situations surprisingly similar evidently happen more often than you might imagine. Folks on my boat have shared stories that left me shaking my head in wonder.

Now by no means am I pointing the finger at any guide or guides in particular because the truth of the matter is that both parties are equally guilty in these situations. The guide has a responsibility to communicate with the customer and the customer has an obligation to ask questions about just what they will be getting as well. Neither party should assume that the other one knows exactly what each person expects to happen on a guided fishing trip. My very best advice to all concerned is to show all your cards, voice your expectations, and under no circumstances leave any gray areas or anything to chance.

If you, as the customer, want to catch a particular fish by way of a certain technique, perhaps learn an area of the bay, or have no preference whatsoever–you need to tell your guide exactly that.

As a guide I personally do not want to take clients to fish a pattern or style that does not suit them. For example; I would never take a first-timer wading in December and expect them to grind for eight hours, looking for "one big bite." Likewise; I would not take people out to sit on anchor throwing live bait when I know good and well they want to be wading or drifting with lures, or sight-fishing shallow water. Virtually every guide I know and trust does their absolute best to try and accommodate each person's wishes on their individual trip. When I get a call or an email from a perspective client I make it a point to tell those folks exactly what type of fish I have been catching and how I'm going about catching them–just in case it's not their cup of tea. This way, they are informed and can make a clear choice whether to book the charter.

Without a doubt one of the best ways I ever learned about the communication gap between guide and client was to become a client myself. Over the years I have hired many guides while I was on vacation, both fishing and hunting. On a few trips I had a particular idea about how I wanted the trip to go and accordingly I consulted with the types of guides who could make that style of trip happen. On a few trips I was just happy to enjoy another type of fishing or hunting that was different from my everyday trips so I gave the guide the freedom to decide what he wanted to do. Coincidentally several of those trips turned out to be the best. People sometimes forget that guides have favorites and specialties too, and those trips can be off the chart if you are willing to give them the freedom to choose.

For quite some time now, more than any other aspect, I have probably enjoyed teaching new anglers about this sport and trying to assist and encourage others to increase their skills while we fish together. I know that on several occasions I have caught myself using language or terminology that was unfamiliar to my clients and at that moment I had to put myself in their shoes in order to explain the information in a manner they could understand.

I remember one particular trip I had a couple from North Texas who were very new to fishing but eager to learn. We started our morning drifting live shad under a popping cork and the fish were just covering us up, it was really good. After a couple of hours we had accumulated a nice box of fish and everyone was having a good time. The conditions were perfect and it appeared that we would not have any problems catching more fish so I decided to take a nice easy boat ride so we could all cool down and then get back to catching fish.

During our brief ride I happened to spot a big school of redfish just absolutely destroying a school of pogies and leaving holes in the water like a minefield that had been detonated. I brought my boat down off plane and showed the couple what was happening, they were amazed and instantly fired up about the opportunity. It was at this point that I decided to introduce them to topwaters. We stopped well short of the school of fish and got on the trolling motor to intercept them. I took the lady up to the front deck for a crash course in how to operate a topwater plug. I made a short cast so she could see what she was supposed to do with the bait and when I told her she needed to "walk the dog" her face said it all, she looked at me the way a confused calf looks at a brand new gate. Realizing she had no idea what "walking the dog" meant I gave her new directions and said, "think jumping rope." She picked up on that instantly.

Reeling up her practice cast, she flung the plug out into the area where the redfish were and began the "jump rope" retrieve. It was blasted within seconds by an oversize red and all three of us howled with delight as the drag began to scream. After a very nice fight we brought the big fish aboard, made photos, and released it. The glow on her face was surpassed only by her husband's. I will remember that day not only for the fish we caught but also for the lesson I learned as well.

Accomplished anglers can often times unknowingly scare potential anglers away from the sport by not speaking in terms that novices can understand. Take the time to share your knowledge in language that makes sense to the beginner because we all had to start somewhere. If you are new to the sport or just want to learn more about it don't be afraid to ask other anglers, most of them will be more than happy to share some information with you.

As a young guide just getting started many years ago, I was always inquisitive and very rarely got anything but great information when I quizzed older, established guides on all manner of topics. An honest approach and an open mind will get you all kind of help while the cocky "know it all" kind of folks will more than likely get shut out. Just remember that fishing is a sport to be enjoyed and there are few better ways to enjoy it than sharing it with others.