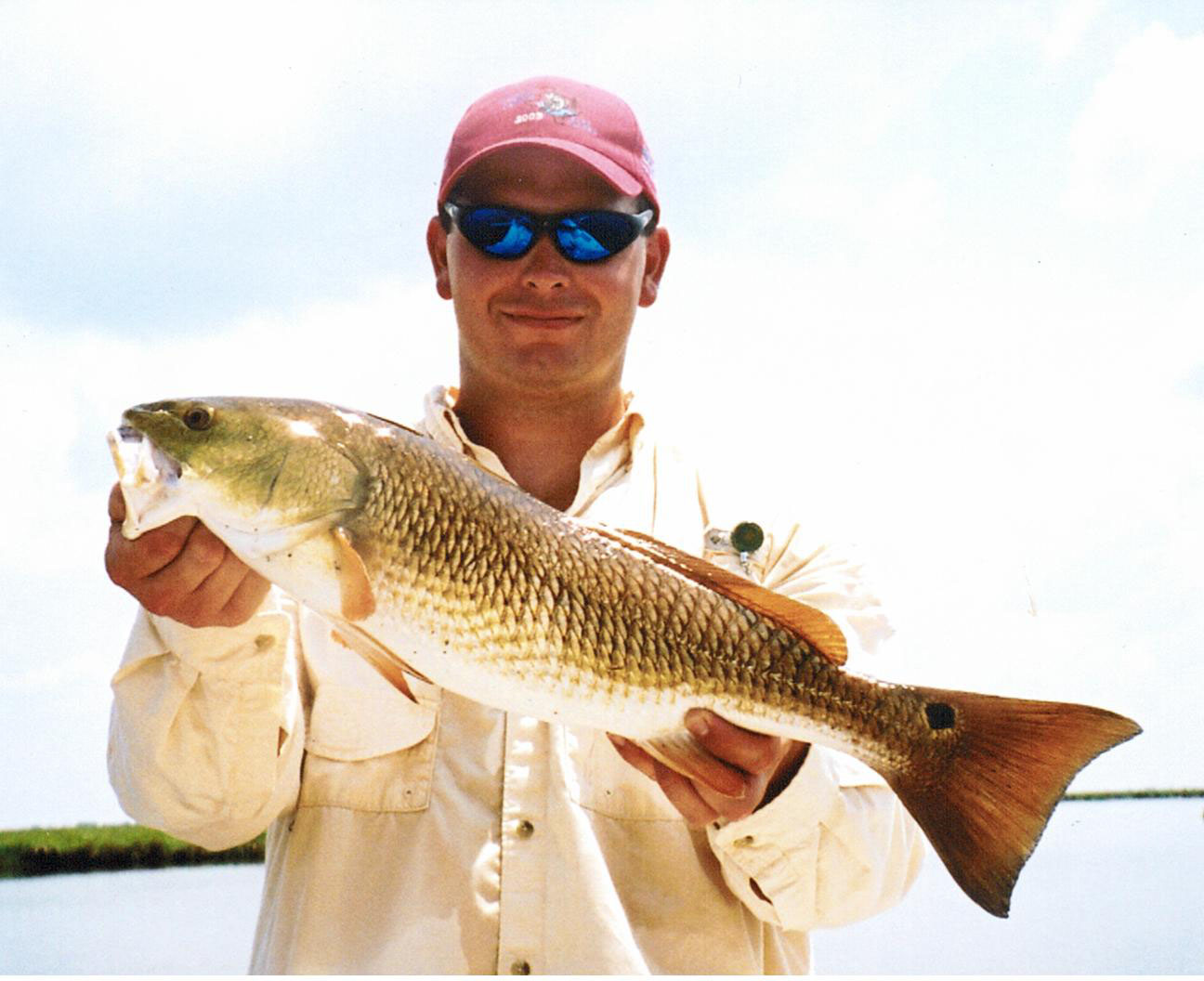 Deon Gipson – A beautiful marsh redfish taken with a slower presentation during the heat of the summer.

Instant gratification; speed is what we need. Only $20.00 extra will get it there tomorrow. All these examples of a world in a hurry and don't think for a minute the sport of fishing is immune. Motors are getting bigger, boats are getting faster, and the whole process seems to be on the fast track to who knows where. A perfect example of the speed sensation are the new reels that boast 7:1 or better gear ratios- talk about burning a bait across the grass. Well in this quest for more speed, we as anglers have forgotten how to be patient, we have forgotten how successful we were when we took time to reel a bait all the way back to the boat with our antique 4:1 ratio bait casters. The fact of the matter is that we are in some ways going so fast that we are missing some of the best fishing out there.

Saltwater anglers who chase schooling fish along with freshwater fishermen who also key in on flocks of birds over hungry groups of stripers, hybrids, and whites are perhaps the worst. The frenzied activity puts everyone on the boat in high gear, often leaving the majority of the water column untouched. It's a proven fact that smaller, more aggressive fish will be the first to attack a bait, so consequently the "speed fisherman" may never see what caliber of fish are really down under the surface. Savvy anglers will let a bait get down under the surface melee and are more often than not are rewarded with better quality fish. Saltwater enthusiasts often find better speckled trout and redfish down under all the small trout hustling shrimp and shad near the surface. By allowing the smaller fish to hit the bait and not setting the hook, anglers can get down past the smaller fish to where the big boys play. Some anglers will actually crawl their baits along the bottom with very little action and catch some of the best fish out there, it's difficult to do but well worth the effort.

By taking the time to patiently work a school of fish with a slower retrieve and perhaps a little larger bait, anglers can effectively cull out smaller fish. The smaller fish will peck at the larger baits while the better fish will usually strike them with more gusto. This slightly different approach proves itself in some of the strangest ways. Think about how many times you have caught a fish while dragging a bait and correcting a backlash, it makes you wonder. If we could see our baits under the water we would see what little of the actual area we are fishing, most of the time our lures are running less than 2 feet deep. Burning a lure at a high speed has it's applications but it's awful hard to argue with the success that the slower approach often produces.

Saltwater anglers can take a page from the freshwater fishing playbook by methodically working cover such as shell pads, potholes, and other shoreline cover. If you have ever watched a bass fisherman work an area with a jig it would amaze you how many times they pitch or flip to a particular piece of cover. The saltwater equivalent to this scenario would have to be flounder fishermen who employ artificial lures instead of conventional live offerings. On Sabine Lake it's a standard method for chasing flounder to work a shoreline with small jigs. Once you catch a fish it's not uncommon to cast back to the same area and pick up quite a few more. Thorough anglers will really capitalize in these situations while "speed demons" will only see a small piece of the action.

Now I have to admit I certainly don't fall into the "patient" category when it comes to how I fish, I know I fish too fast but that doesn't mean I am not thorough when I need to be. Over the last several years I have slowed the pace considerably since I have been spending so much time poling around shallow water and chasing redfish. I have learned to slow my pace and concentrate more when I get a bite and this has produced some impressive results at times. One very good way to see just how fast you fish is to use a swimming pool and watch how your lures work. It's a down right eye opening experience to see where you lure spends most of its time. Waiting for a bait to hit the bottom in 6 or 7 feet of water seems like an eternity for most of us but the patient anglers know it's worth the wait.

Like most things in life we are all in a hurry to get to the end result; we are so worried about getting to the finish line that we miss the race. I'm not saying that we need to just go out and sit still, but most of us do in fact need to slow down. The last example of this school of thought is a classic and I know I have shared this one with a ton of people. Think about the guy in the small boat who could only fish certain places because of weather, the run was too far, or some other factor. That guy learned his area and really fished it as hard and thorough as possible and he caught fish. Now the same guy after having some success in a local tournament or two feels the need to get a bigger boat so he can fish more places. Our hero buys a big center console with a massive outboard and is ready to tackle the world. Now instead of fishing, our guy is running all over the place looking for the "next" place to fish. I have seen this happen more than a few times. With no limitations the guy looses all the patience he developed fishing from a small boat and consequently he quits catching as many fish. That's really something to think about isn't it?