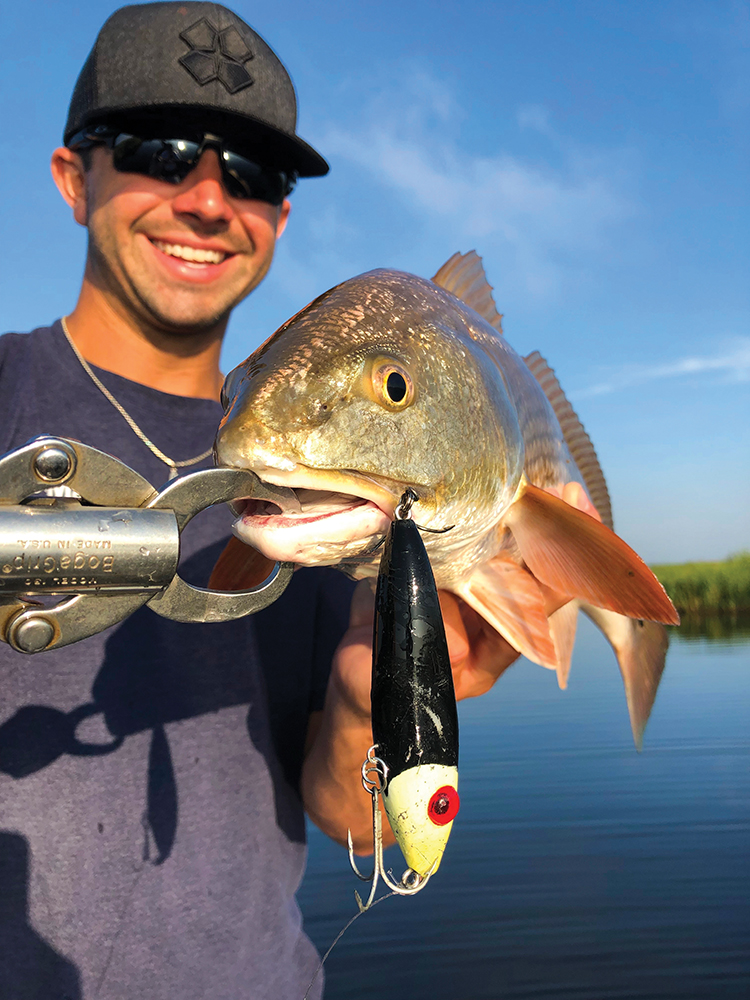 If you are like me, warm sun on your face promotes a big case of spring fever. The gradual change in the weather from winter misery to the promise of spring is just enough to drive anglers crazy with thoughts of getting on the water. The surprisingly consistent fishing that we have enjoyed on Sabine and Calcasieu for the first several months of the year were almost unprecedented - downright incredible at times.

The combination of willing fish and mild spring temperatures so early in the year only spoiled us, we were all living a dream and nobody in their right mind wanted to wake up. But, wake up we must and that nasty noise you keep hearing is not the snooze alarm, it’s the wind roaring through the trees and tearing up the bay. Hopefully we have seen the worst of the wind and the months ahead will bring calmer seas and more fishable days.

Several of my most recent trips on the water have been solo adventures without a fishing rod and accompanied only by my second-best girl, a black lab named Sally. I truly love these days because it helps me switch gears from ducks to fish without missing either one. Springtime offers some of the best opportunities to see ducks in their full plumage before they make their way back north. The blue-winged teal migrating back up from Mexico are usually the stars of the show, especially when I’m scouting the marshes of Sabine and Calcasieu for redfish. The small groups of birds work low and fly through the maze of islands like little fighter jets, making just as much noise with their wings as their calls. The drakes are painted up like a brand new decoy and easily identifiable, they drive my dog nuts waiting for a shotgun to go off and the opportunity to fetch one. To see birds in the air and fish in the water at the same time is what really gets me going, the best of both worlds right there in front of you.

On one such outing I made a loop through some of the marsh ponds I hunted this past season. Making my way in I passed a line of wade fishermen standing like statues on an expansive flat. I swung my skiff wide of their position and made my way into the marsh. The lake that was churned up from wind and runoff gave way to beautiful clear marsh with barely a ripple on the surface.

As the skiff settled off plane and everything calmed down I climbed up on the platform. Much to my surprise a group of redfish were milling about as if they had no idea a visitor had made his way into their pond. I waited and watched for a few moments until they eventually disappeared.

For an early spring day it was quite an eye opener; we normally don’t see fish like that in the marsh until late April or May. Calcasieu will usually crank up a little earlier than Sabine but it appears they both may be a little ahead of schedule this year.

Those waders I told you about will certainly vouch for the fact the winter pattern for redfish has been about as constant as you could ever hope for, in fact the numbers of redfish in both Calcasieu and Sabine appear to be as high as anyone can remember. After seeing what the marshes look like and having experienced some excellent days wading this year I have a great feeling for what is in store.

So, spring and early summer mean different things to different anglers. Some dream only of flat seas at dawn, cobalt-blue prop wash, and an endless Gulf of Mexico to explore and enjoy. Others fixate on rushing across the bay in search of hordes of squawking gulls covering fleeing baitfish herded to the surface by schools of hungry trout and redfish. Still others look forward to the quiet solitude of anchoring on their favorite stretch of water with a livewell full of fresh bait, a cooler filled with cold drinks, and their best fishing companion in the seat next to them. All the above sound inviting and each group would be hard-pressed to change their tactics because, in their world, their way of going about it is just right and that’s what fishing is all about.

And then there are folks who attack their sport with a passion that borders on obsession. Tournament anglers fit into this category since they know no boundaries when it comes to chasing their quarry. These folks study charts, maps, and graphs like a college student preparing for final exams. In a very short time these “machines” can decipher nearly any body of water and know it as well or better than the locals. It’s amazing how good some of them are. I am continuously amazed at how they consistently find fish on foreign water and they prove it at every tournament.

Now that we are out of winter’s shadow and into spring there will be plenty of different programs to choose from and all of them will produce at times. I really like the fact that there will be so many places to fish that the crowds will tend to scatter, unless of course the wind forces everyone to hide in the same calm location. Yes, there will be a pile of folks on the jetty but that’s not always bad, especially if you are running past them towards a flat Gulf of Mexico.

Every stretch of water in our area will have something to offer as summer draws nearer with each passing day. From the marshes to the gulf, take your pick and enjoy the whole thing. Also, don’t forget to take the kids, school will be out soon and the best fishing companion you could ever hope for will be chomping at the bit to get out on the water.