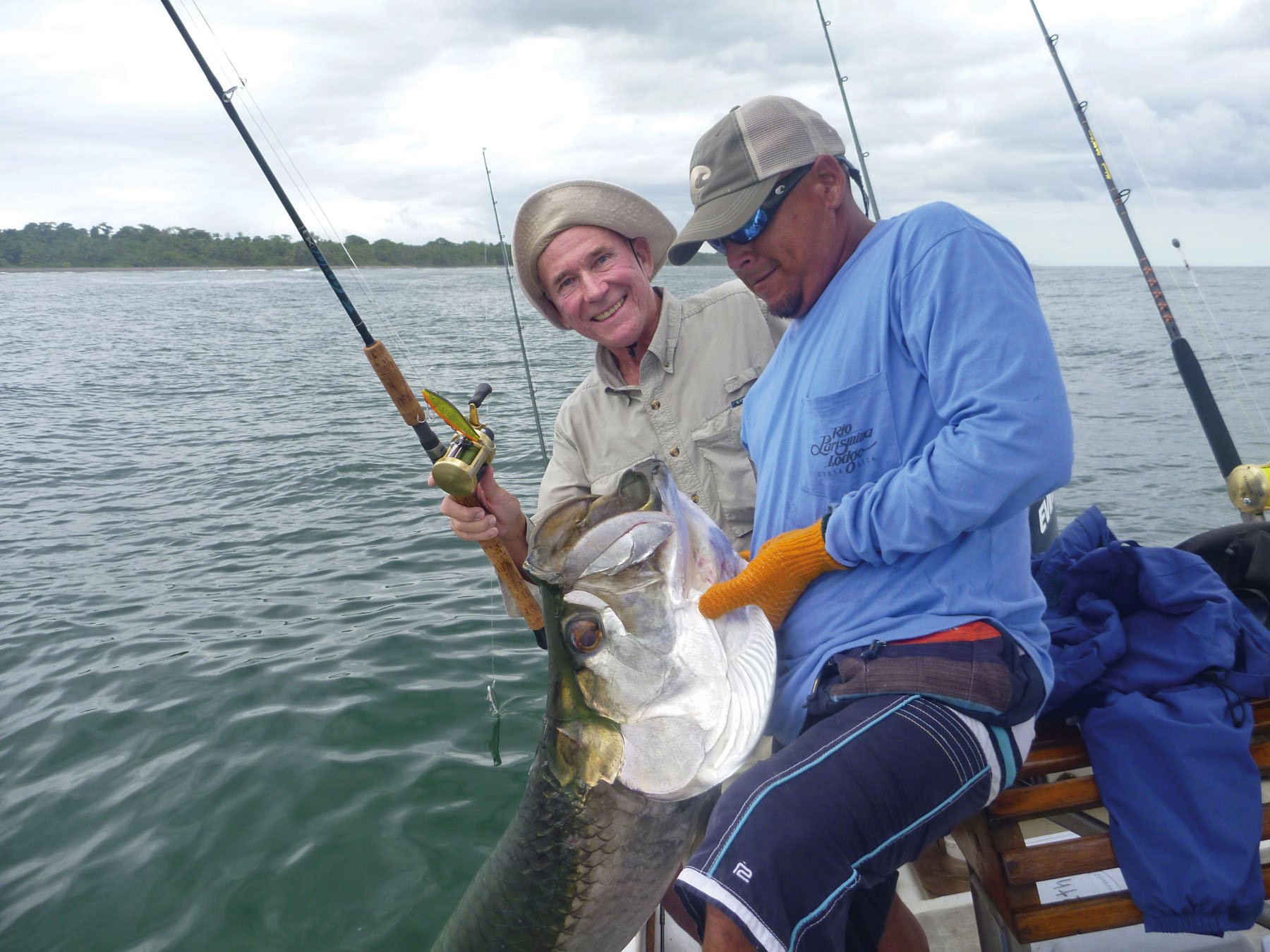 Guide Kenneth Prendas idled the 21-foot center console into shallow water near the mouth of Costa Rica's Rio Parismina. Weak surf broke across the inside sandbar as outgoing brown current meshed with the green of the open Caribbean.

He cut the 150-horse Evinrude and the boat drifted. "Give this a quick try," he said. "When it's calm like this, schools of tarpon maybe move close to the beach."

Inside the river, about one mile back in the jungled canopy of roaring howler monkeys and flapping toucans and honking cane toads, waited the dock of Rio Parismina Lodge. We had 15 minutes before the midday return to camp.

I was thinking about a dip in the pool when we saw the lazy boil of a flashing side and a turning fin. Tarpon!

I grabbed a heavy Falcon plug rod fitted with a Shimano 400 casting reel spooled with 60-pound braid. Knotted to the mono shock leader was a Model 72 MirrOlure. As I scurried forward and prepared to cast, an astounding thing happened: The water around the bow erupted in tarpon.

Five or six big fish launched and twisted and flashed as tiny minnows showered and sprayed and scattered. One broadside free-jumper almost hit the boat. We had managed to drift in the murky water on top of a shallow school rampaging after the frantic bait.

The school disappeared amid splashes and boils and shouts. Oh, yeah... I had the rod in my hand. The MirrOlure winged toward the feeble breakers. I cranked and pumped several times and the line came tight against a long chromium flash.

The six-foot tarpon jumped twice, framed against the wild beach, one of those images that etch into your mind. Then the plug sailed free. Pendras made a vigorous reel-up motion with his hands. "We go in now."

I stowed the rod and shrugged. Tarpon are difficult to "stay stuck" on plugs. Probably just as well. That fish would have been a beast under the high, hot October sun. Besides, we already had four catch-and-releases for the morning.

Rio Parismina Lodge runs a well-oiled and civilized drill; you leave at first light, fish until 11 a.m., then kick back at camp for about three hours before launching for the afternoon session. The break is a great supercharger during the peak of the tropical heat.

Several other boats were running back. We bounced through the cut and raced up the river, the cooling breeze aided and abetted by an icy Imperial beer hoisted from the cooler.

Pendras nosed into his slip at the covered dock. Lodge owner Judy Heidt and manager Fernando Gonzales sat in wood-and-leather Costa Rican rockers and greeted the incoming fleet. Most of the 24 anglers were gesturing in superlatives. Several didn't have much to say–but, hey, that's fishing.

Houstonians Link Smith and Ronnie Sellers had tales of eight or ten jumped fish. Smith had most of his action on Strike Pro Tuna Hunter topwater plugs.

"Ah, Escritor Famoso," Gonzales said, smiling. "And how was your morning?"

"Great," I said. "Wore me out. We had tarpon trying to jump in the boat when Kenneth made us quit fishing."

Gonzales and I go back several decades to when I made my first forays to the fabulous tarpon fishery of the rain forest rivers draining Costa Rica's northeastern coast. He calls me "Famous Writer," as if I'm a balding J.K. Rowling.

The fact that I've been fishing the region off-and-on since 1982 gives me a reasonably valid perspective. And my opinion is this: The tarpon fishery was better back then, but the tarpon fishing is better now.

Tarpon numbers surely were greater 30 years ago, and reliable fishing for mature fish was available in the rivers and lagoons, but (at least on my trips) overall hookup/catch numbers were not as good.

In short, you can bend the rod more today. And that's a rare circumstance at any reasonably accessible fishing venue. I base this conclusion on several factors.

First, the ocean tarpon population is still spectacular. No commercial pressure is put on the big schools moving up and down the beachfront and, oddly, sport fishing pressure remains about the same. Which is to say, very little.

The Parismina area has experienced minimal development. The village near the river mouth is off Costa Rica's tourism radar and the jungle continues to press close. No roads cut past the veins of channels and lagoons of the low country. You either arrive by small prop plane, landing on a paved runway near the village, or you run upriver by boat for 30 minutes to a roadside landing.

Rio Parismina Lodge is the only major camp on that drainage. The situation is much the same for Rio Colorado to the north and Rio Matina to the south. Rio Tortuguero is protected as a turtle sanctuary but rumors persist that tarpon running the surf are uncommonly fond of baby green turtles returning to the ocean.

The camp uses the V-hulled center consoles built heavy with plenty of glass to punch through potentially rough surf at the outlet. Once off the beachfront, the 150-horse motors allow the boats to run laterally along the unpopulated coast to search for schools. The captains use cell phones or radios to communicate, and electronics to help locate deep fish.

In contrast, back in "the day" we used 16-foot flat-bottomed aluminum skiffs at John Kollman's old Parismina Tarpon Rancho and Archie Fields' Rio Colorado Lodge. Or maybe they were 14 footers. Either way, you weren't looking at much, especially when a hooked tarpon jumped aboard.

The skiffs were sketchy in rough water and severely limited in range. You basically fished the home river mouth and perhaps one or two of the closest lagoon passes.

The small boats were superior in the rivers and lagoons but, to repeat, the "inside" tarpon fishing simply has not been reliable in recent years. Nobody seems to know why.

Finally, fishing methods have improved. The skiff fishing consisted mainly of casting lures, plugs, and jigs on 20-pound casting tackle, or streamers on fast-sinking 11- and 12-weight fly lines. The fact that great numbers of tarpon were hooked by this simple program supports my claim that the overall fishery was better.

Lures, of course, still draw strikes but most fish now are caught while drifting "sardina" minnows on circle hooks on 30-pound-class tackle (or 60- to 80-pound braid). The fresh six- to eight-inch baitfish are caught on sabiki rigs along water-change lines at the start of each morning/afternoon session.

The circle hook drill was a major catapult. First, the drifted baits draw strikes from random or indifferent tarpon that might snub lures. And when a hot school is located, double and triple hookups are common.

Second, the technique is extremely effective for catch-and-release. Assuming you allow time for the circle hook to rotate against the pulling fish, the barb almost always sticks cleanly in the jaw. On this note, the best immediate reaction when a rod "goes off" is no immediate reaction. The frantic yank used with a conventional "J" hook is a rookie mistake.

Watch the rod bend as line from moderate drag peels from the reel, then pull back slowly; about this time a well-hooked tarpon should be flailing through the air.

This hands-off method plays well for beginners. The beauty of the program is that you can either sit back and just enjoy being there, or allow the stern baits to drift while chunking plugs from the bow. Either way, tarpon are the Plan of the Day.

Rio Parismina Lodge offers an excellent full-service tarpon package. This opinion is based on using conventional tackle (opposed to fly-only) and adding up the number of high-octane jumps during the typical four- to seven-day trip.

On the subject of jumps, now and then a hooked tarpon zooming straight up through 40 or 50 feet of water will "sky," leaping so high you are looking up, not out–pretty damned impressive. You don't get those ballistics on a flat.

But now I must offer a disclaimer to this glowing review: A siege of rough surf or a raging flood can significantly downgrade a trip. But, once again, that's fishing. No venue this side of a hatchery tank is bulletproof to Seor Weatherman.

The camp is open January through October, and the most consistent calm conditions occur during late summer/early fall. But any week can provide awesome fishing. The schools are there year-round.

And, of course, during any outing you might zig rather than zag. On a really bad day a boat might get skunked and on a really good day you might jump 10 or 12. The average is somewhere in between. And, with tarpon in the 50- to 150-pound class, that's plenty of full contact.

We booked our trip through Ward Michaels of Michaels' Hunting & Fishing, Inc., of Orlando, Fla. Smith, Sellers and I have known Michaels at least 15 years, and he has Costa Rica wired as well as any tico (local). In fact, Michaels caught a 58-pound, 8-ounce Pacific snook near Quepos that recently was certified as the all-tackle IGFA world record.

We flew non-stop last October from Houston to San Jose, the capital. The flight takes about four hours. Groups overnight at the Cariari Hotel, one of the best facilities in the city, then depart at first light for a 40-minute charter flight to the Parismina strip, there to be met by the ever-smiling and never-aging Gonzales. You are fishing by 9 a.m., maybe 8 a.m., if you don't screw around too much fiddling with tackle.

The double-occupancy rooms are clean and comfortable and bugs are minimal. Heidt runs a tight operation; the meals are well-prepared, the bar is always open, and everything works.

And, a mere five minutes from the dock waits the potential for an extraordinary angling adventure.