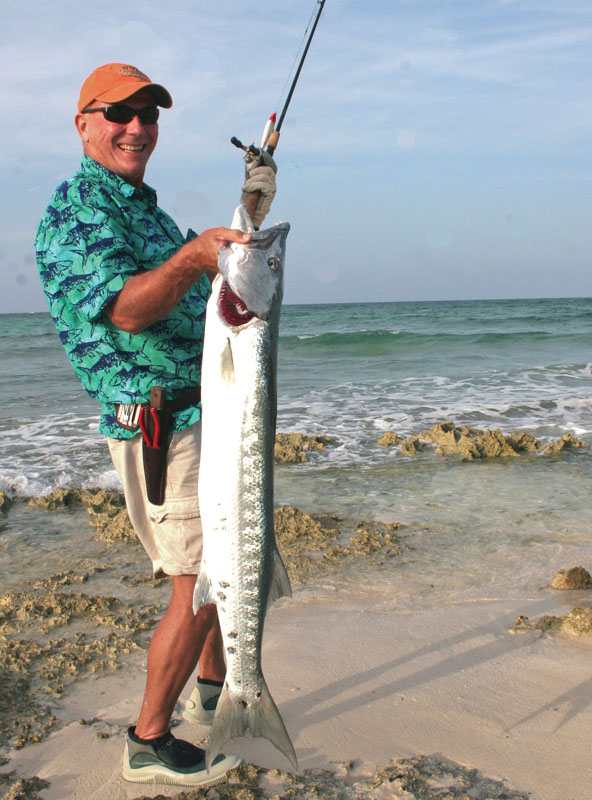 Link Smith was running hot. He was fuming as he paced up to join Dain Crow and me at the TSA-approved customs line at Houston's Bush Intercontinental.

"United just hit me for $200 one-way for the big rod tube! Oversized baggage!"

We were booked on a non-stop flight to San Jose, Costa Rica. Smith brought five or six 7-foot casting rods for the Pacific sailfish expedition to Herradura. The one-piece rods were stowed in one of those adjustable bazooka PVC tube rod carriers.

I brought four 7-foot casting rods. My quiver of sticks sailed through the check-in counter with no problem.

All were three-piece "travel" models stashed in the bottom compartment of my duffle bag. Each rod was cased in its individual tube, and each tube measured approximately 30 inches in length. This compact format is a safe and efficient way for the flying fisherman to dodge the tender mercies and extra charges of airline carriers.

The breakdown technology for casting and spinning rods evolved from the fly fishing industry. The typical 9-foot fly rod is unwieldy to transport, even in two sections, so during the 1980s the growing fly fishing market moved primarily to four-piece rods.

This was made possible by improvements in the construction of quality graphite blanks and superior resins, and the ability of manufacturers to join the sections with trim integrated ferrules. The typical high-tech rod boasts thin walls of superior strength, and little of the tapered action is lost in the process of cutting the blank into sections.

The same concept increasingly is available for the plug caster. If anything, it's even better, since only two ferrules are used in the three-piece construction of the typical 6 1/2- to 7 1/2-foot casting rod. This might be worth emphasizing, since many plug casters accustomed to standard one-piece rods might never have owned or even used a break-down stick.

I've traveled extensively with breakdown rods (fly and casting) and cannot recall having one fail on a ferrule connection. Two or three broken tips were due to shameful rookie mistakes, nothing whatsoever to do with blank construction. Assuming the three sections are joined correctly, today's typical travel rod is rugged and reliable.

The first sailfish on our April bait-and-switch expedition proved this point. Crow was up when the mate shouted, "Starboard teaser!"

As the mate reeled in the hookless teaser, baiting the jabbing, stabbing sailfish closer, Crow grabbed the closest casting rod rigged with a ballyhoo on a circle hook. The three-piece rig was one of mine an old 6-foot, 10-inch Fishing Tackle Unlimited "Traveling Angler" rated for 12- to 30-pound line and fitted with a Shimano Calcutta 400 spooled with 20-pound mono.

It was a light setup for the typical 80- to 90-pound Pacific sailfish, but Crow dropped back on freespool, allowed the circle hook to rotate, and landed the fish within 15 clocked minutes. The boat did a bit of jockeying to follow the running, jumping sail, but it was a masterful light-tackle performance.

And not once in skilled hands was the little rod threatened.

Incidentally, I used the same FTU rod and Calcutta reel to whip two tarpon in the solid 100-plus class last fall off the Rio Parismina beachfront. I was casting M77 MirrOlures into rolling schools in 30 or 40 feet of water, and neither fish took longer than 20 minutes to land.

Note: I do not necessarily recommend going under-gunned. I mention these accounts to illustrate that the three-piece construction can take a lot of punishment. As any experienced light-tackle angler will agree, you don't catch big fish in deep water on a short clock without putting serious heat on the equipment.

Three-piece casting and spinning rods in most popular lengths are available at major tackle retailers and through factory web sites. Prices range from approximately $100 to $300, similar to the cost of comparable one-piece models.

Many actions and grades are offered, from light "trout" sticks to magnum rhino chasers. For short airline hops along the Gulf Coast (say, Houston or Dallas to Harlingen), the go-to choice for bay and beachfront duty is a light or medium-light casting rod suitable for 10- to 15-pound line and 1/4- to 1/2-ounce payloads.

Numerous fine travel rods within that range are available over the counter. Or, you can have one custom made. One of the favorite rods in my travel quiver is a three-piece 6 1/2 footer built about 25 years ago by master rodsmith Kenny Murph of Houston. He used a Fenwick blank and the trim little stick remains clean and classy today. For what it's worth, tackle trends come and go, but a great rod is just that a great rod.

Regardless of graphite pedigree, the southbound angler would do well to load up rather than down. Latin latitudes require more horsepower. Inshore fish in the 15- to 30-pound class are common, and something topping 50 might clamp onto a topwater plug or jig chunked into the jungled shadows or crashing surf.

A piddly trout rod is not what you want if you are standing flat-footed on the beach and a leg-long snook or barracuda hits and streaks for the nearest coral head.

A medium-heavy or heavy action blank is the superior choice. Some of these powerful sticks were intended by rod companies for muskellunge or king salmon, but they do yeoman's duty on tropical tides.

For example, prior to the sailfish trip, I purchased a 7-foot, three-piece St. Croix Tidemaster rated for 20- to 30-pound mono. It has a powerful butt yet enough tip flex for smooth casting with 1- to 2-ounce payloads. And it's a good-looking, no-nonsense stick, with cork grips and a soft green finish. It retails for about $200, and comes with a fitted carrying tube.

Come to think of it, you can pack light, medium and heavy and be prepared for whatever mayhem might occur.

And if space or weight is an issue when packing rods in the checked duffle bag you might be able to put two breakdown rods in one individual tube. The diameter of the typical tube is sufficient to stow the six sections by alternating butt-to-tip. When you open the top, the case looks like a canister of pick-up sticks.

Better yet, carry the travel rods on board. The short tubes should not be an issue for the overhead compartment. Specialty fly shops sell snazzy travel cases with fashionably correct logos that hold multiple rods. Or, if you don't mind sacrificing a few style points, you can whip out a roll of silver duct tape and lash several individual tubes together.

Once at camp, pay attention when joining the rod sections together. If you opt for the pick-up stick packing technique, make certain all three sections you grab from the pile do in fact belong to the same rod. They tend to look similar and mistakes can be made; this especially is true after three or four fingers of aged rum and amid a cloud of Cohiba smoke on the poorly lighted porch of a tropical lodge.

Each section should be firmly seated with straight pressure. Avoid twisting or turning under force, as this might damage the ferrule, and be most careful when breaking down the rod. The temptation is great over a stuck section to jam your thumb for leverage against the upper guide and, yes, we've all gotten impatient and done it. But such rough handling is a good way to break the guide or rip the foot from its windings.

If a smooth pull fails to unseat a stuck ferrule, try the old trick of holding the rod horizontally behind your bent knees and pulling smartly. This sounds stupid but dates back to the fiberglass and bamboo days of metal ferrules and works remarkably well. Worst case, enlist the aid of a friend. You each grab with both hands and pull straight apart.

But these are extreme measures. Chances are, the quality rod will break down easily, ready to wipe dry and store in its compact tube for the flight home and your next angling adventure. And with no annoying hassles and outrageous fees for extra baggage.