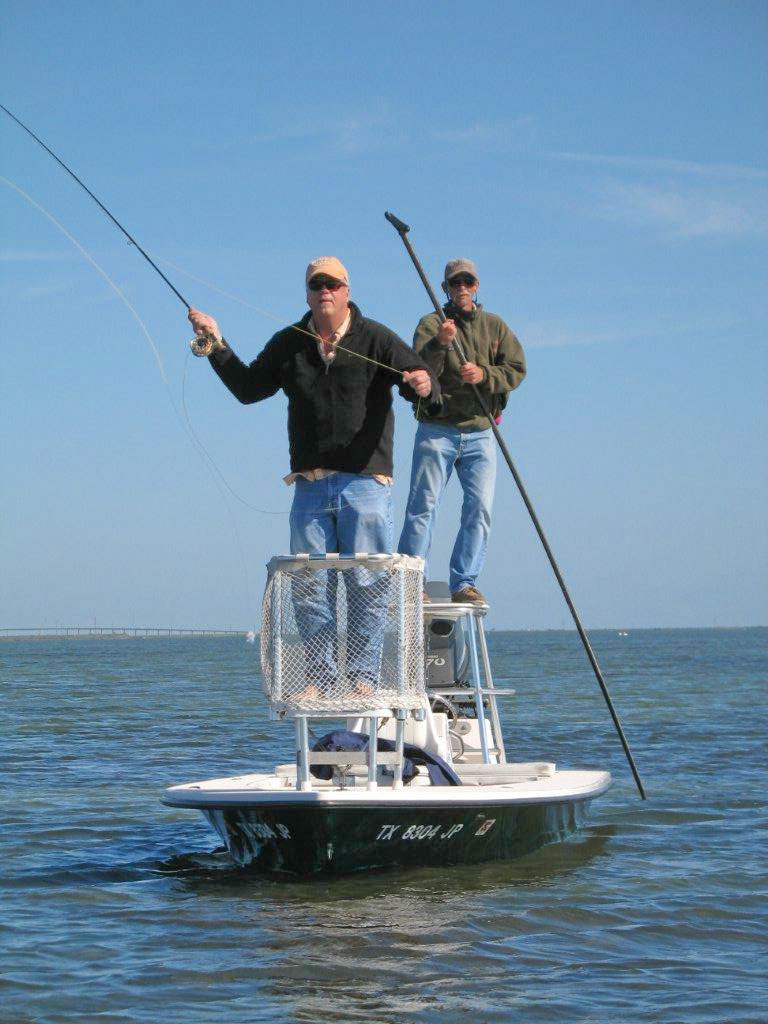 A push pole is handy for tweaking a wind-blown drift for the best casting angle on a sighted redfish.

Excessive wind is a recurring issue that all coastal anglers must face. I am, of course, referring to the meteorological gusts, not the hot air spouted by outdoor writers.

Some days, some regions, are worse than others. For example, the lower coast gets more wind than the upper coast. The Laguna Madre sees more whitecaps than, say, Galveston Bay.

But if you want serious wind, I'll give you serious wind. About 10 or 12 years ago, I made four expeditions to Argentina's Tierra del Fuego, on the extreme southern tip of South America. We were wading a river and fly fishing for sea trout (sea-run brown trout).

We were in freshwater but no matter; wind against a fishing rod is the issue here. Most days, the sustained wind coming off the Atlantic Ocean and racing across the open vistas started at 20 to 30 miles per hour, but days pushing 40 were not all unusual. Occasional afternoon gusts topped 50 or 60.

To put this in perspective, TDF is the only place I have visited where the inside handles on vehicles were fitted with short ropes to prevent doors from being ripped from hinges if opened against untimely gusts.

Yet, each day we caught sea trout – beautiful world-class fish in the 10- to 20-pound class. Mind, we were fly fishing, not plug casting, so don't stow your long rod and hide behind the lame "too windy" excuse when the forecast calls for a few chops on the nearest bay.

We were successful because we worked with the wind; we used the lashing gusts to our advantage. A universal truth of angling is this: the wind is your friend. There are several reasons that support this wisdom on Texas bays.

Decent water clarity is hiding somewhere, and the limited areas of favorable conditions often will concentrate fish. Study the wind angle, calculate the tide level, and go find one of these privileged locations.

When a cold front hits and the wind is gusting from the north or northwest, seek out the deeper channels and holes that attract fish escaping the low-water flats and shorelines.

If the wind is from the prevailing east/southeast and shingles aren't being ripped from the nearest boat shed, do not discount the windward side of a bay. The leeward side might look inviting, but the chops and currents piling against exposed shorelines push baitfish and shrimp. Also, the whitecaps provide cover for roaming schools of speckled trout and redfish.

This is assuming that the water clarity is fishable. Chasing chops pushed by a whipping side-shore wind from the west or southwest is a rookie mistake; brown water almost certainly will prevail. But a gusting wind from the open Gulf can carry surprisingly clarity, especially during the cooler currents of fall and winter. Suspended sediments don't seem to stir as easily.

A steady wind is a strong ally for the boater drifting the expanse of an open flat. You turn the boat broadside and allow the forces to carry you. An electric trolling motor or a long push pole can tweak the angle, and if the pace becomes too fast, a nylon drift anchor slows the progress. Tie the drift anchor amidships to maintain the broadside profile for safe, effective casting.

A high-speed casting or spinning reel (say, 6-to-1 retrieve ratio) is the superior choice during a windswept drift. A slower crank will work you to exhaustion.

If extreme wind or adverse angles conspire against a coordinated drift, the answer is simple: Hop over the side and wade. Remember, the water piling against an exposed shoreline encourages the action to move shallow. And, unless the wind has a tropical name, it will not uproot the firm-footed angler. You can move at your own pace, shuffling for the close, high-percentage casting position, no worries about blasting through the strike zone.

Also, the rough surface masks your approach. The lower profile and lack of "hull slap" also help. This is a stealth mission, unless maybe you have the misfortune of walking up the back of a giant stingray cozied into the bottom.

The drawback to wading is the lack of long-range mobility. For this reason, pick a promising area, a stretch of several hundred yards you feel really good about. This could be a cove popping with mullet, or perhaps a prominent shell point or a shallow reef. Perhaps best of all is the edge of a channel dropoff.

Last summer, with southeast wind hitting 25 miles per hours and the open Laguna Madre cut to ribbons, several partners and I waded the north edge of the East Cut near Port Mansfield and had good success sight-casting with plug and fly to redfish along the shallow edges between the spoil banks. The biggest drama occurred crossing the channel to reach the Mansfield harbor - strictly Victory at Sea conditions.

Casting or spinning, drifting or wading, use the wind as a supercharger for long chunks to cover water when blind casting. A sweeping lob with a two-handed rod allows the payload and line to billow with the breeze. Granted, accuracy is not the best but pin-point presentation seldom is necessary when blind casting.

The fly rodder using the standard-issue double-haul can modify the technique by making a strong side-arm backcast to keep the line under the wind. Well, sort of.

Then, during the forward stroke, raise your rod arm with a powerful sweep, then stop the tip high and let the wind catch and carry the open loop of line. Slowly drop the tip as the cast shoots. Again, accuracy is marginal but you can throw a remarkable distance. This is assuming the coils of shooting line are ready to rock, not tangled underfoot or caught under the hull (or, when wading, stretched downwind and choked in stringing grass).

I believe this specialized fly casting technique is known as the "Belgian Loop"; whatever it is, we used it with great success for long bombs at TDF.

Of course, with plug or fly, sooner or later you must about-face and punch casts into the gusts. With the fly rod, throw a high back cast (easy); then, with the strongest haul you can muster, slam that sucker low and hard across the whitecaps. If the rod blows up, don't blame me; demand satisfaction from the over-priced builder.

The plugger is best-served with a low, aggressive side-arm delivery. That, and a thumb educated at the post-graduate level. The freespooler has not be made that cannot backlash into the teeth of a whitecapping wind. Even under a cool thumb, don't expect superior upwind distance. Just be satisfied to get a fishable cast out there without having to "milk" the tangled spool.

The sly plugger can cheat by improving ballistics with a heavy lure such as a compact spoon or a streamlined dog-walker, something that will drill with authority into the gusts. The lead-head "tail" specialist can tandem-rig two jigs of appropriate size, in effect doubling the payload while maintaining a suitable shallow-water sink rate.

Incidentally, a safe, tangle-free way to carry a tandem-jig rig in a rod holder is to loop the leader of the lower jig around the reel handle, then hook the two single hooks together and reel tight. Even if you're not catching anything, you will earn major style points back at the dock. Loose tails flapping and twisting in the wind are the flag of a rookie.

On the subject of flags, when they are whipping, conditions can be prime for bay boaters working the birds. This especially is true during fall. The sustained wind aids the gulls, allowing them to soar and hover like kites over "popping" shrimp and schooling specks and reds.

Gusting wind and working birds go together. And give the black-headed gulls credit; they have remarkable eyesight and can spot near-surface feeding activity even amid sandy chops. Poor water clarity is not necessarily a trip-killer as long as trout are chasing shrimp and the aerial sentries are on patrol.

As a general rule (barring the arrival of a norther), early mornings are calmest. Onshore Gulf wind usually increases during the afternoons.

Along the middle and lower coast, stringing surface grass in the exposed primary bays can become a major issue. There's a scientific explanation for this that's over my head; just trust me, it happens.

These "wind rows" of sea grass tendrils and foam streaks are most common during the mid- to late-afternoon hours. The narrow rows of cover can actually attract bait and predators but the grass can severely impact your retrieve. Avoid using plugs with dangling trebles; single-hooked lures minimize fouling.

Regardless of offering, do not cast across the wind rows. You will bog, guaranteed. Aim for an open alley and keep each presentation fairly short; you won't forfeit the extra yards of a long lob mired in weeds. Incidentally, when a cast does foul, don't waste time hand-plucking the hooks; just whap the lure on the surface several times to clear the fodder. Given the turbulent conditions, I don't think any nearby specks or reds will mind. Who knows, the commotion might even attract them. Many thousands of popping corks and rattle corks have been sold under that premise.

Wind does have its drawbacks, not of the least of which are stringing grass and brutal open-water crossings in shallow-draft boats. But consider the alternative of a slick-calm day under a bright sun. Nothing moves without serious effort and close-quarters work on spooky fish is very sketchy.

The glassy bay may look inviting but many old salts will echo this truth: Near or far, the wind is your friend.