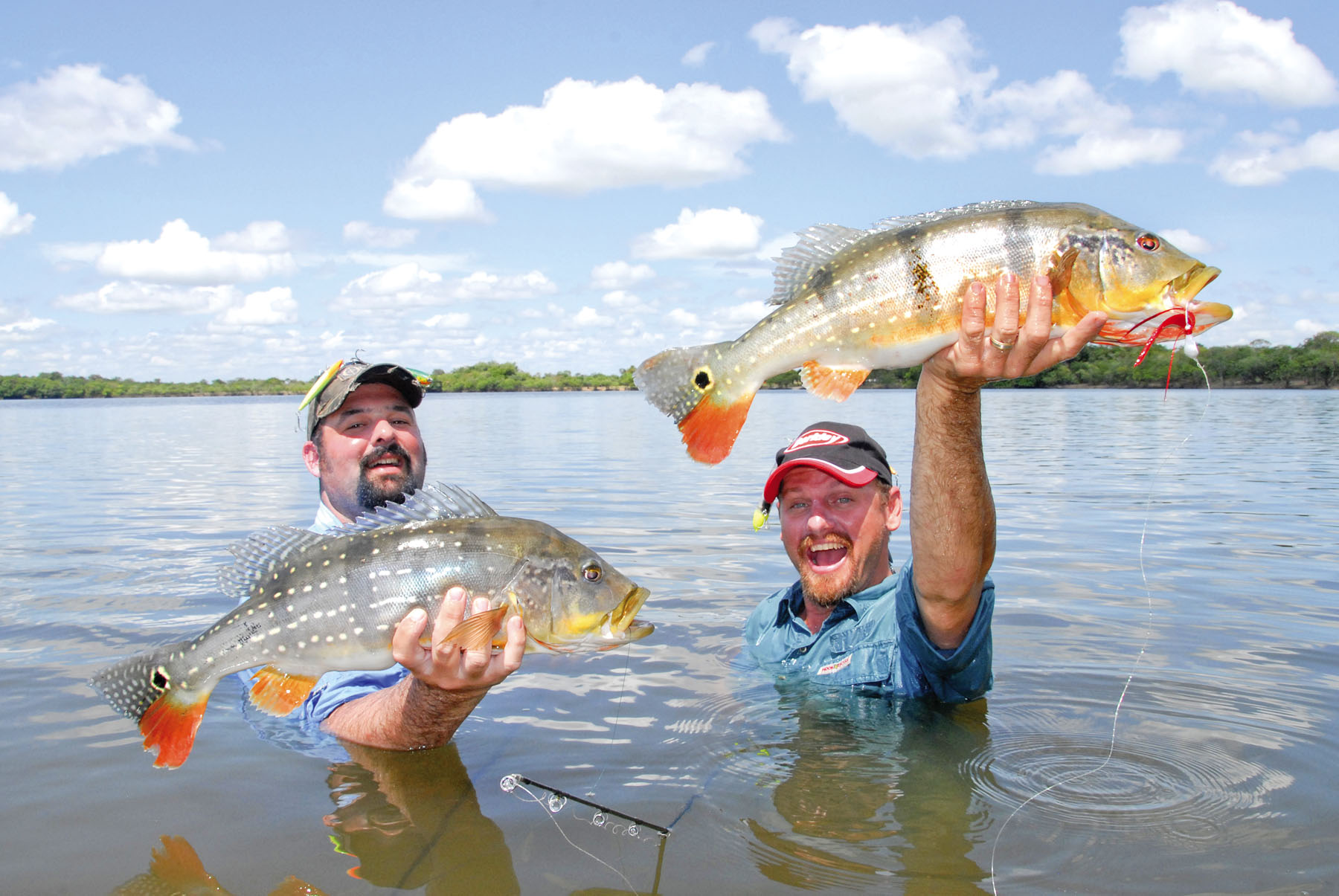 Another way of keeping cool, is just stay in the water all day. While camping in southern Venezuela, other than steaks twice a day, we didn’t have many modern amenities. So, we wade-fished during the heat of the day. Much to the chagrin of our hosts, who had a healthy respect for piranha and freshwater stingrays.
As fishing summers continue to get hotter, we've been adapting to the increased heat using our own methods, a mix of common sense and learning from past mistakes. So far, none of my crew has been hauled into the ER, which is something of a miracle after all these years. However, last summer, two friends on different boats were hit with heat prostration, or hyperthermia, as it's called, the opposite of cold-related hypothermia. One guy thought he was coming down with the flu not likely in August went home under his own power and recovered. The other friend thought he was having a heart attack and was hooked up to an IV bottle in Port Lavaca hospital. Lack of hydration, they said, after running a few expensive tests.

"I was slightly nauseous, but not thirsty," says Bill. "Jittery feeling, but not necessarily faint. Not sleepy but feeling like I needed to rest. Keep in mind it was a nice cool day around Labor Day, we actually had a NE wind. That's probably what threw me. I could have kept going on the water all day. It didn't hit me until we were back at the cabin and had slowed down and was getting ready to eat.

"After they'd taken my vitals and hooked me up to the EKG, the nurse asked me when I'd last hydrated [drank water]. That's when I cursed to myself and wished I had time to unplug and walk out and save the fees. About a month later I was in the restroom at an NRG power plant. They actually had a color chart on the wall that said you could identify the signs of either heat stroke or dehydration by the various colors of urine listed on the chart."

Said chart brings back memories of achieving the darkest color on the pissing scale, years ago while seasick on the snapper boat Defiant, during three days in heaving seas. There was only a grim closet for a bathroom, and Capt. Dan Henry's wife Dixie was on the boat, always within view, or so it seemed. This left the railing, which leaned far over the water every few seconds. There were Cokes and water to drink, but in 1972 we'd never heard of Gatorade, and in any case I was losing whatever I drank while hanging over the rail. The only substance I could keep down at times was watermelon, which probably kept me alive. When I was finally able tofinally go after three days, in a scene below decks best left unwritten, my urine looked like Lipton Tea.

Okay, water is the most boring drink ever, unless it's flavored, or if you're in dire straitslike drifting in a lifeboat, or crawling in the desertwhen you'd be happy to bury your face in muddy water flavored with mosquito larvae. While out fishing on day trips, one can get dehydrated like Bill, even when the weather isn't bad. One scenario: You had plenty of Crown the night before, woke up at dawn and grabbed a big cup of coffee and breakfast taco, then spent a day on the water, sweating up a storm by afternoon. That's when dehydration and heat problems can ruin your day. The chances of that may hinge on your diet going back a few days, but your rate of dehydration increases with alcohol and caffeine.

As one remedy, I've found that a case of La Croix sparkling water is a handy item on the boat. Lightly flavored, carbonated, with zero sugar. When Bill was hit last summer in POC we were nearby, fishing during the same days. We kept three cases of flavored water in our own cabin, adding more to the boat box each morning. We fished long hours and did okay. Bill's crew had lots of bottled water and Gatorade, but he forgot to drink it. A carpenter, who works outdoors, introduced me to La Croix and swears he drinks 10 cans a day without gaining weight, and buys 20 cases when it goes on sale. In recent years we relied heavily on Gatorade, but they're proud of it and the new G-2 version available today tastes like liquid Jello and is full of corn syrup. We stick with water, thanks.

It's a simple slogan, but we really "are what we eat." This may sound overly health-conscience, but there are ideal foods you can eat before and during a day on the water, food that will keep you going. Ironically, a perfect snack for fishermen is bananas, but that's become a taboo item, bad luck juju. We won't transport bananas on the water, but figure they don't count if they're inside you, so we make a point of having several before backing down at the ramp.

The reason bananas are good for fishermen (and athletes) is potassium. To quote from one medical journal: Potassium is an electrolyte, an electrically charged molecule involved in various body functions. Potassium is important for the heart, kidneys, muscles and nerves to function properly. It helps regulate the amount of fluid in the body, helps in the contraction of muscles, and works to maintain the heart at a regular rate and rhythm.

Potassium is an essential nutrient and a deficiency causes fatigue, irritability, increased blood pressure and chance of stroke. Unless you are on dialysis, or have a special condition, an overdose of potassium from natural sources is nearly impossible. So, if you have a friend who is a cranky S.O.B. after a day of fishing, or doesn't have near the stamina he or she used to, they may well be lacking in potassium.

My dad always said to eat a banana every morning, along with a handful of raisins, to prevent stroke. Add milk, and you've got a triple hit of potassium before going fishing. You could easily dump all three over cereal, though that means an old-fashioned, time-consuming breakfast difficult to eat, when making that dawn patrol. That taco is high in protein and will keep you going, but unfortunately is low in potassium. Keep in mind the medical association says 4,700 milligrams of potassium are needed daily by the average adult (leaving most people woefully deficient), so it's best to fortify yourself before a strenuous day in the sun.

What to pack in the boat? I did a little research and found that an avocado provides one of the biggest hits of potassiumthough only a third of a daily recommended dose. Squeeze lemon juice over one, and sprinkle with salt. In the restaurant, grab a bowl of guacamole whenever you can. In recent summers we've mostly depended on pickle slices during the heat of the day, consuming one jar daily between three of us, because we know pickles are high in potassium. Last summer we had a boatload of Port Neches anglers cranking up big snapper, and an old friend named Mike froze up; he couldn't move his arms at all, even though his snapper was only 10 feet away. I reeled it up for him and coerced him into eating a slice of pickle, even though he made a face, and he returned to fishing. Our younger captain, half our age, also remarked how much better he felt after eating a few slices. It was mid-afternoon, the Gulf was glassy and hot as perdition, and we were sweating like politicians on election day. We literally keep three jars of pickles in the icechest every trip. Athletes have taken to sipping two ounces of pickle juice, rather than the same potassium hit in a quart of Gatorade. However, it's been cautioned that pickle juice carries a lot of salt, garlic and flavorings.

Many fruits are high in potassium. According to various sources, papaya is way up there, with 781 mg per serving. (They're very good dried and easily consumed while wading or in the boat.) Other fruits include banana and kiwifruit with 450 mg per serving. Peaches and plums have 230 mg, cantaloupes and grapes 240 mg, nectarines and oranges 250 mg, apples have 260, watermelon 270, and sweet cherries 350 mg. Years ago, when at the end of our rope (so to speak) during long offshore tournaments, we'd pulled out an entire watermelon from the cooler, which felt like a life-saver. And maybe it was.

We need that potassium. When our old friend Capt. Jesse collapsed offshore of Port O'Connor, his fishing charter drove him back to the dock, and he was carted off to Port Lavaca. The doctor diagnosed low potassium, and stuck a spoonful of horseradish under his tongue while he lay comatose. That woke him up, real quick. Horseradish isn't that high in potassium, a teaspoon is only five percent of daily recommended, but it's very compact and easily delivered to the fallen. The doc compared his condition to a 12-volt battery that had completely lost its charge. Lack of potassium also promotes kidney stones, and sure enough Jesse returned to Port Lavaca for that very reason, this time a more expensive visit. Anyway, it sounds like keeping a small jar of horseradish on the boat is good insurance, in case someone collapses and needs to be jump-started.

Another POC guide we know returned to port last August, thought he was coming down with the flu, felt bad all over. He drank a lot of water and next morning felt somewhat better. When I mentioned bananas and potassium to him, it turned out that, for a week, he'd neglected his usual diet of bananas bought at Speedys. Next morning we showed up at the store, dropped a big banana bunch on their counter, and announced we were going offshore... This raised eyebrows from everyone in hearing, including employees. The cook looked up from her breakfast tacos. Real jokers we were eating bananas before launching the boat, just to be safe.

So, aside from late night crankiness and leg cramps, we've been doing okay during summer. But we should be consuming even more foods high in potassium, especially during our strenuous five-day visits to POC.