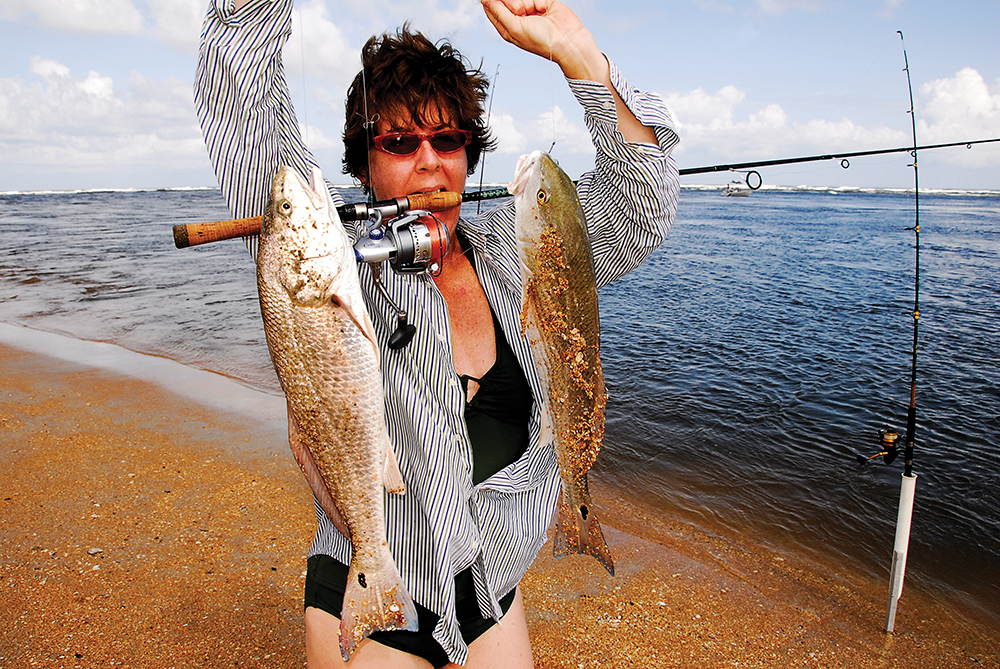 Miss Amy with a double-header of redfish at the beach.

There has long been a debate in Texas over whether spin tackle has a place on the coast. There are still plenty of diehards who stick with their baitcaster reels, casting into the face of 20-knot gusts and picking at backlashes. The wind in South Texas averaging higher, I think the Laguna Madre area was first to accept non-backlashing spin tackle more than 30 years ago. Up in Southeast Texas, not so much. I know some old-timers today who still say they don’t want spin gear on their boats. Knowing the background of that area, I can’t blame them.

We started out back when the “red reel” was king, whether on brand new Sam Rayburn and Toledo Bend reservoirs, Sabine jetties or offshore at Gulf platforms. Our gang all owned one rod each, not counting a pool cue partyboat rod. The Ambassadeur 5000 A or B (or later) the 5500 reels were treasured possessions. During high school years in Port Arthur we’d meet up on Tuesday nights and clean reels, taking them apart in a cloud of WD-40 spray. I was the only one in the group who’d ever used a spin outfit; with relatives in South Miami, I’d been trained as a kid to use left-handed Mitchell 300 spin reels, or right-handed Ambassadeur baitcasters, and there was no choice in the matter. Spin tackle was just about king in South Florida.

Spin wasn’t practical at our few Texas venues of that time. It was terribly inaccurate in thick flooded timber and couldn’t manhandle fish out of jetty rocks or Gulf platform pilings. However, once we grew older and started traveling, spin became much more useful. It was essential for bonefish, if you weren’t a fly fisherman. Or casting into high wind while wading the Laguna Madre, mahi-mahi schools offshore, or maybe a high-stakes, one-shot cast at a cobia cruising by in open water.  (Not around Gulf platforms). Making consistent long throws in the surf while trying to reach distant green water in a headwind. Or a rolling school of fast-moving tarpon. These are all scenarios where a frantic thumb and untimely backlash can ruin a shot at glory. Or a trophy fish, anyway.

At this stage in life, I overwhelmingly use spin tackle. I take a lot of people fishing, and they do very well with spin gear. In my small boat I carry a brace of inexpensive spin reels mounted on seven-foot graphite rods, and we mostly sling lures all day. With spin gear we get the most out of every fight with trout, redfish and mackerel.

I favor using decent rods like the early All Stars but matched with an inexpensive spin reel that will last a few years, like the Shimano Sienna 4000, which is very popular; a tackle store owner recently told me the company can’t keep up with demand, so I bought his last two. Some guys scoff at $36 dollar reels, but not after using this one. They’re smooth as glass and with them we catch plenty of redfish, though mostly trout. This year, I snagged a tarpon of 120 pounds or so behind the dorsal fin, and marveled that this rod/reel combo could be doubled up for more than an hour, as we followed the big fish straight out into the Gulf. I finally realized I was wasting our time and his, along with a good tide, so I broke him off. Left a green Dixie Jet spoon on his back. (If anyone finds that lure, mail it to our editor and hopefully he will forward it to me). So, yes, these spin outfits are tough—though they won’t pull an annoyed six-foot tarpon sideways.

I see constant rod attrition in my fishing program, so there’s no need to go too expensive. Twenty-two years ago I bought a matched set of five Daiwa IM-7 rods, and now there is only one left. One was yanked out of the boat last week, while I was netting the biggest trout of the day for a client. I’d left a gold spoon dangling, barely in the water, and a thieving ladyfish grabbed it. There was nothing to be done, we heard a splash and watched a trail of bubbles speed away like a torpedo track. Then last summer, while trying to get a big jack crevalle into the landing net, I heard the crack of another of my precious rods above my head. No telling what the client was doing; he may have grabbed the rod mid-length. He later tipped $20, “So you can buy a new one.”

Twice in recent years while bait fishing, I’ve had rods ripped out of rod holders from violent strikes. The first went while we were hammering tournament winner-sized redfish in a bayou. With the second rod we were being pestered by very energetic, three- and four-foot bonnethead sharks.  So, you can see why I don’t use expensive gear. I doubt some top-of-the-line spinners like the Stratos would catch these same fish any more efficiently.

I never knew my fishing buddies at Sabine Pass were using high-end gear, but they’re retired now (their kids ran off) and so these guys can afford the better tackle in life. I found this out when a thirsty Dale Fontenot was trying to open his ice chest, one of those high-dollar fish boxes that weigh a ton. He couldn’t pry it open, there was a vacuum inside. He’d set his rod down, and it suddenly flew towards the gunnel. With a gloved hand I somehow caught it in mid-air and handed him the rod.

He strained against the bent rod and glanced at me. “You just saved a $250 outfit.”

His little baitcaster rig didn’t look expensive. With it he reeled in what turned out to be another thieving ladyfish. The writhing fish was unhooked and quickly tossed overboard. Then he sat down and looked at me. “I own four of these rods. Now help me pry this cooler open.” Dale’s new retirement gift cooler was stingy with drinking water that day.

For personal use, high-end spin tackle has advantages such as smoothness and lightness. They’re also said to be impervious to salt. However, I can’t imagine letting the public use a brace of such tackle. People I just met an hour ago on the dock, who may have never made a single cast. Or sometimes can’t keep a grip on the rod, for that matter.  Imagine all the woeful stories of lost tackle out there, from fishing guides.

Yet, spin gear is ideal for the public. It’s almost immune to backlashes and simple to use. The reel hangs below the rod, kept there by gravity. Casting may not be pinpoint accurate but throwing the distance is easily learned.

Recently I took a young couple trout fishing. The husband was an experienced bass angler, but his new bride had never made a single cast. Within a half hour she was firing out the long throws, reaching way out there with a gold spoon. We caught a few keepers, but at 11:30 a.m. a black storm towered back towards town, spreading halfway across the horizon, almost cutting us off. It was time to go! I tidied up the boat for a fast run. With her last three casts, that gal caught trout of 18 and 21.5 inches fighting them like a pro, without getting overly excited. You could tell she was thrilled, while he was a little reluctant to quit before lunch, as I was. But we had no choice. We ran wide open for four miles and scooted into safe harbor just as the wind shifted to head-on. Loaded their fish in the car and they drove away as the first raindrop fell, and it rained the rest of the day; another victory for spin tackle in the hands of a novice and a clear lesson that beginners don’t have to use live bait. And I wouldn’t doubt that couple will be fishing together for a long time.