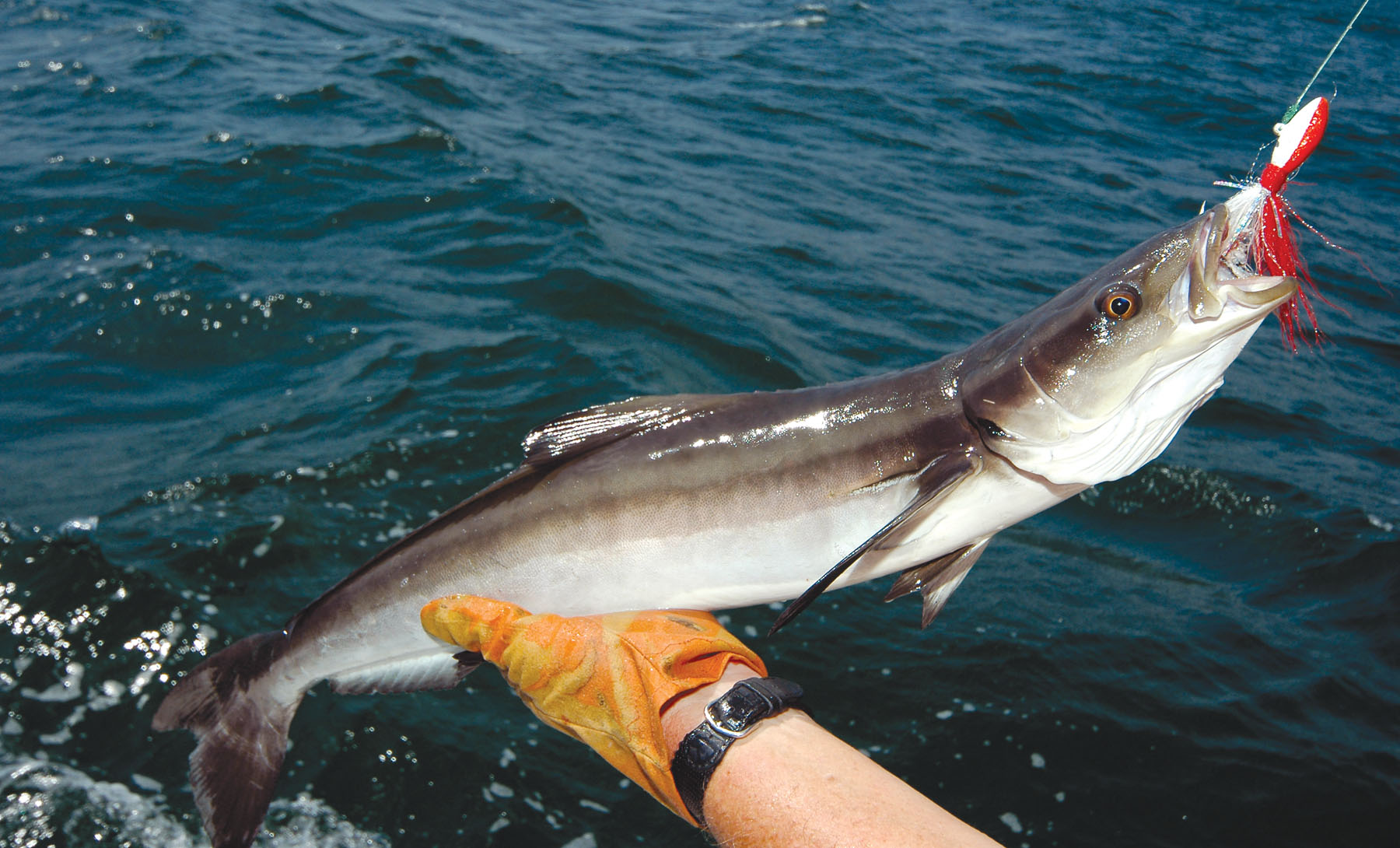 Juvenile undersized ling show up even in the bays, and they should be carefully released. This fish can grow up to 135 pounds.

The winds of April herald the annual run of ling along the Texas coast, with water temp of 70° a key factor. On a typical windy weekend, they're out there cruising around the platforms offshore without hindrance, running deep below wave chops of five to six feet. However, when the wind lays for a few hours or even days in good years, these fish rise to prowl boldly on the surface, a rare prize and target seen from stationary boats and gawking anglers.

What follows is often comical, people tripping over themselves to get a bait in the water. Ling, also known as cobia, are usually curious enough for just one pass or circle around the boat, and you have to react quickly. Often they'll follow a hooked bottom fish to the boat, or even grab one, before heading back down. The angler armed with a secondary rod, ready to cast within seconds, has the best chance at these fish. Groping around in the live well or cooler for fresh bait may be futile; the fish may dive within 10 seconds-unless a quick hand feeds them chum, keeping them interested.

That still doesn't guarantee a hookup, however. Once, during a tournament, we found a lonely 40-pounder skulking behind a lone anchored shrimpboat on a glassy Gulf, the only fish in sight. It refused anything with a hook hidden inside, even a leaderless hook slyly hidden inside a fine cigar minnow. However, he wasn't above slurping 20 freebie chunks of same. This went on for some time, until we finally grabbed our only live bait in the well, a difficult task after losing the dipnet off the transom many hours before. It was a slippery little devil of a banded rudderfish (they resemble baby amberjack) that had been hiding in the well since the previous day. Now, with an 7/0 hook pinned to his tail, he landed in blue water and shot away from the ling, who spun and lathered the water while trying to grab him. That hapless baitfish soon vanished and on 60-pound line, hundreds of yards from the shrimpboat, the ling was easily caught. Back in Galveston, people were shocked we'd once again caught a decent kingfish and ling, along with a required red snapper, to win the three-fish combo tournament. All because we'd had one live bait hiding in the well, and caught the only ling we'd seen in three days.

Other magical baits or techniques have coaxed ling into biting. One partyboat angler in Mississippi finally hid his hook inside his lunch, a hardboiled egg, and a circling 65-pound "lemonfish," as they're locally known, inhaled it. Another angler hid Alka-Seltzer in the mouth of a dead sand trout, and that worked. You just never know what will tempt ling. It's maddening to have a huge prize fish cruising boldly around the boat, unwilling to eat. A number of ling have even been free-gaffed into boats, not an easy job when a strong fish, completely rested, is galvanized into action. One bored deckhand, from a crewboat moored to a platform, tried the free-gaffing trick and was yanked overboard. The captain sounded the man overboard alarm, the crew came running and retrieved the guy, who still clung to gaff and ling. They landed the fish but the guy lost his job. (Apparently they don't want potlickers on the crewboats offshore.) Or so the story went.

Ling are indeed powerful big, growing up to 135 pounds or so. The biggest I ever saw, in 1973, cruised by with several others, making just one pass, while we sat and fished from a platform 35 miles off Sabine. We were dumbfounded, and wanted no part of him. A little over six feet long, with a head at least 18 inches across. None of the guys would cast to him.

Smaller puppy-sized ling grow very quickly, and should be handled carefully and released, since they're now a prize fish, a bonus in today's offshore arena. We often encountered schools of small ling during late summer. You could catch and tag 30 on trout tackle, and they hit any spoons or jigs. Before size limits were imposed in the early 1980s, some boat crews kept boxes of these small fish like so many trout, a wasteful practice that had to stop.

Many of these early-season, April ling act like they've never seen hooked bait before. Instead of circling warily with beady eyes like the ling of late summer, these fish may charge right in, grabbing a bait repeatedly even when an angler overreacts, snatching hook and bait from greedy lips two or three times.

Ling can appear at any time in blue or clear green water along the entire length of the Texas coast. However, we've always found them more plentiful from Galveston east, with Sabine even better. Louisiana must have a far better population, because there you can expect to see ling on a typical day offshore. By comparison, I didn't see a single ling off Port O'Connor during an entire summer of guiding there, years ago. That's unheard of, off Sabine Pass.

Texas offshore tournaments often require a ling in a combined mix catch, or a side pot. That's always a risk, because there's no guarantee you'll even see one they're here today and gone tomorrow. It's fun, however, targeting them in a tournament instead of hoping for incidental catch. In tournaments we typically work 2-ounce jigs deep, keep a sharp eye for surface fish, and maybe set out a live bait.

Catch a calm weekend in April or May, and it can happen. It's a tough row to hoe, however, compared to the Florida Panhandle, where these same fish migrate from east to west, waddling along in six or eight feet of lime-green water. Anglers there are nuts over their "cobia" and hold big, month-long tournaments each April. Many boatless anglers there take shots from a half dozen tall piers that reach 1,600 feet offshore, paying just $3 bucks a day…While in Texas we load up the offshore boat and hope waves at the jetty aren't too punishing, the Gulf not too cruel, before heading out 20 or 30 miles.

If Texas winds persist and you have an itch for spring cobia, click on the beach cam at Navarre Pier east of Pensacola, and check out their conditions, at: http://navarrebeachpiercam.com/ Conditions may be ripe for a road trip, since Pensacola is only seven hours east of Beaumont. The Eastern Gulf often has opposite weather conditions from the western half, and with a light breeze and calm green water, it's a cinch they're catching cobia in April. You can't launch a boat within 20 miles of this 1,600-foot pier, but kayaks are dragged into the surf within 100 feet of this structure. The pier has a small store, breakfast and burger bar, sizeable Tiki bar outside, kayak rentals for about $40, and live music on the weekends, so there are worse places to spend a few days fishing. Call the pier for cobia numbers landed that day at (850) 939-2188. This time of year, the place may be out-of-control with spring breakers, however. I plan on being there anyway; old habits die hard.

We don't see schools of ling like those of years ago. In the 1970s, in April, the first boats reaching green water often found dozens of ling prowling around a single platform, setting the stage for a long day of action. I've personally seen perhaps 50 ling at a single small platform only 15 miles off Sabine, each weighing from 20 to 60 pounds. They wore us out, busted rods, trashed the boat's interior. As rookies we first beat on them (once in the boat) with fire extinguishers, then Louisville Sluggers, then used single-shot .22 rifles, since gaffing fish into small boats was something of a threat-if not to life, then certainly limb. A big ling has a powerful tail. And unlike most fish, a hooked ling may swim right to the boat, still full of fight. Few fish will fight on a gaff, as hard as this one.

We got used to shooting our ling, like they do with halibut in Alaska, because they behaved so well while removing the hook and sliding them into an ice chest. However, using firearms in a boat is not without hazards; even Ernest Hemingway managed to shoot himself in the leg with a .22 when a gaff broke on a fish, swung back and struck the rifle, setting it off. Doh! The bullet ricocheted around the boat and lodged in his calf. For Papa it was no big deal after two wars and many hunts in Africa. You can bet he didn't miss happy hour that evening.

Years of catching these fish resulted in a growing respect and a new perspective; in 1987 we tagged and released 107 of these fish, winning the AFTCO tag award that year for ling, for the Atlantic and Gulf.