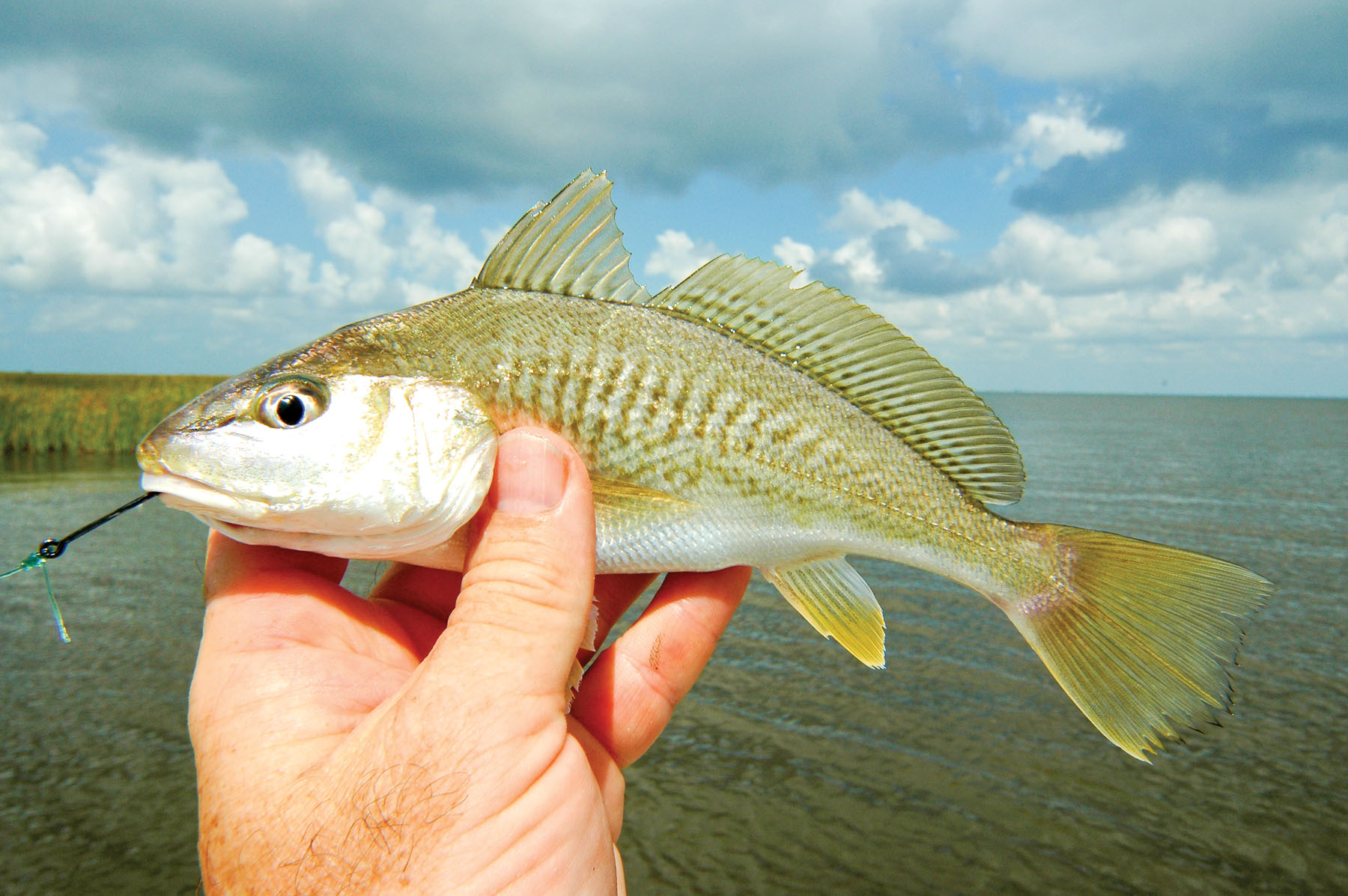 Medium-size croaker from Sabine Lake.
Coastal old-timers sometimes recall when the croaker was a respectable fish on the Texas coast. They were plentiful, much bigger on average than today, easy to catch from shore, tasty and fed the masses. During autumn they'd make a big run for the Gulf (the croaker, that is) and much like flounder in those days, were caught by the thousands. If I'm not mistaken, they ran in October before the peak flounder run, though I was never part of the shoulder-to-shoulder crowd at Rollover Pass who caught so many. Loads of both fish were caught with simple cane poles.

For that crowd, a sack of croakers was more valuable than any six-pound trout. That's a head-scratcher for many of us today, who are happy to wade cold water with aching backs for a single shot at the trout of a lifetime. And bragging rights. But there are people out there who would rather fill a croaker sack with tasty croakers, if and when the population recovers. Most people don't even know how a croaker sack got its name, that's how low the croaker population has sunk.

It's difficult to find big croakers these days, so I was startled when a big one appeared on the end of my line in November, way back in the salt marsh on a chilly day. They're decent fighters, actually pulled drag on the reel, and those same fish landed on our dinner table that very night. One of them had egg sacks big enough to fry. It was quite a meal.

For the past 20 years, almost all croakers I've caught came from state waters offshore, from November through April. They usually hit along with sand trout, big whiting and almost-legal snapper. Anchor up out there on a wreck, artificial reef or old platform, drop down three small circle hooks baited with squid, and leave the medium rod with 40-pound line in a holder while you attend to other matters. When the rod takes a steady bend, crank it up; you should have two or three fish on the line, a mixed bag but with eventually several big croakers.

A piece of cake. However, a quick check with friends reveals a very short list of big croaker caught in coastal waters during the past dozen years.

I talked to Paul Straw, formerly of San Antonio, now retired to Florida, who caught the Texas state record croaker. Sure enough, he was out in the Gulf, his fish caught in April. But it was a shocking fish.

We were using squid on bottom, Straw said, in 75 to 100 foot depths, something like that. I cranked up this strange fish and said, What the heck is that?

His charterboat captain landed and examined it, and pronounced it a golden croaker though of ponderous size, maybe a state record. We weighed it back at [I think it was] Sea Ranch Marina and it came in at 5.47 pounds, and sure enough it really was a state record, says Straw. His croaker was an amazing 29 inches long, caught on April 10 about 20 years ago, a record that stands today. My guess is that croaker was still living offshore after winters embrace.

Big croaker bite inshore during hot weather, of course. We were tossing spoons and jigs in a deepwater harbor near Sabine last summer, the sun beating down like Perdition, when Pete Churton cranked up an almost two-pound croaker that attacked his big one-ounce silver spoon in about 20 feet of water. We'd just returned from offshore, and he still had wire leader attached to the spoon. (That day turned into something like a 12 fish species day, after we first ran offshore 10 miles, then the jetties, and lastly back in port for one limit of flounder and the big croaker). So, what happened to croakers? How was an important fishery almost destroyed on the Texas coast? The real culprit was shrimp trawls, whose bycatch of discarded fish included an estimated 400 million croaker annually during the late 1990s, according to Texas Parks and Wildlife records. One can easily surmise the toll was worse during the 1970s and 80s when croaker populations really plummeted. In 1975 after unpleasant events finally ended in Southeast Asia, a great many new fishermen took to shrimping and crabbing along the Gulf Coast, especially in Texas/Louisiana. There was lots of new, relentless fishing pressure.

Anyone who has ever approached a trawling shrimpboat, much less boarded them as I have, quickly notices dead croakers either floating alongside, or baking in the hot sun on deck. Apparently croakers were never designed to evade shrimp trawls; these fish evidently hug bottom and are slow to react when a wide net plows through.

The damage was plain to see, and the state took action. Since the mid-1990s, TPWD has bought out and retired more than 2,100 of the 3,231 commercial shrimping licenses then working state waters. It's doubtful any new licenses have been issued, either. Shrimping efforts have been greatly reduced, and all those critters caught in the nets now have a chance to increase their numbers.

That's why croaker seem to be making a comeback, but its a slow process. State net samplings in the bays show promise with increased catches. But the combination of rampant shrimping and three fish-killing freezes in 1983 and 1989 took a heavy toll. At least one coastal biologist believes that croaker have never recovered from the 83 freeze, though you would think sufficient numbers of those fish had migrated offshore by late December of that year, when the freeze arrived, to escape the big fish kill going on back in the bays.

There is now a targeted net fishery for croaker, but these small marina shrimpboats supplying the needs of weekend fishermen may not have much of an impact. They're making short pulls with the nets, and anyway there are only so many live marina bait tanks along the coast. Today's croaker soakers, as anglers are called, know that the easiest way to catch a limit of trout is to buy a few dozen live croaker. For some reason, a speckled trout will do anything to wrap his lips around a noisy croaker, even in murky water. Croakers work far better than finger mullet, which can be difficult at times to round up with a castnet. They're also impossible to keep healthy in marina live tanks. Most small croakers, once placed in a marina holding pen, adapt and seem to thrivewhile finger mullet quickly bruise themselves, try to jump out, and then die off within a day or so. But the impact on croaker populations with this live-bait harvest is thought to be negligible.

At any rate, I'll be looking for a honeyhole one of these days, where big croakers still bite. One of our mentors from high school days, Doc Ferguson in Port Arthur, was fond of anchoring in 20 feet of water in the south part of Sabine Lake, hoping for a cooler full of croakers. We were young guns back then and often dragged Doc offshore (in his boat) on some choppy days, taking bruises, fighting big ling and hoping for snapper too. But Doc, a veteran of the grim campaign in Northern Italy during World War II, was perfectly content to anchor in calm water and load up on his favorite-eating fish, the modest croaker, and without taking punishment offshore. He liked to anchor around the drawbridge at the south end of the lake, fishing bottom, but that was too tame for the rest of us.

To this day, the croaker fishery struggles to make a comeback. No size or bag limits exist; indeed, there aren't enough fish for anglers to impact. And there is no state hatchery stocking program. Croakers seldom make headlines and never magazine covers. Many guides would rather be crucified on the Apennine Road leading into Rome (think Spartacus), than be photographed with a croaker. Metaphorically speaking. Today it is trophy trout that have ascended to the pinnacle of popularity, while the croaker has fallen off the radar.

Croaker still have one advantagetheyre better on the table. Fillet a big one and fry it in corn meal, and compare it against any coastal trout: the croaker will make your eyes roll back in your head. Like it did for generations of Texans, before shrimpboats took their terrible toll. As the old-timers used to say, a plate of fresh, fried croaker is a meal fit for the governor. And will set you to craving more.