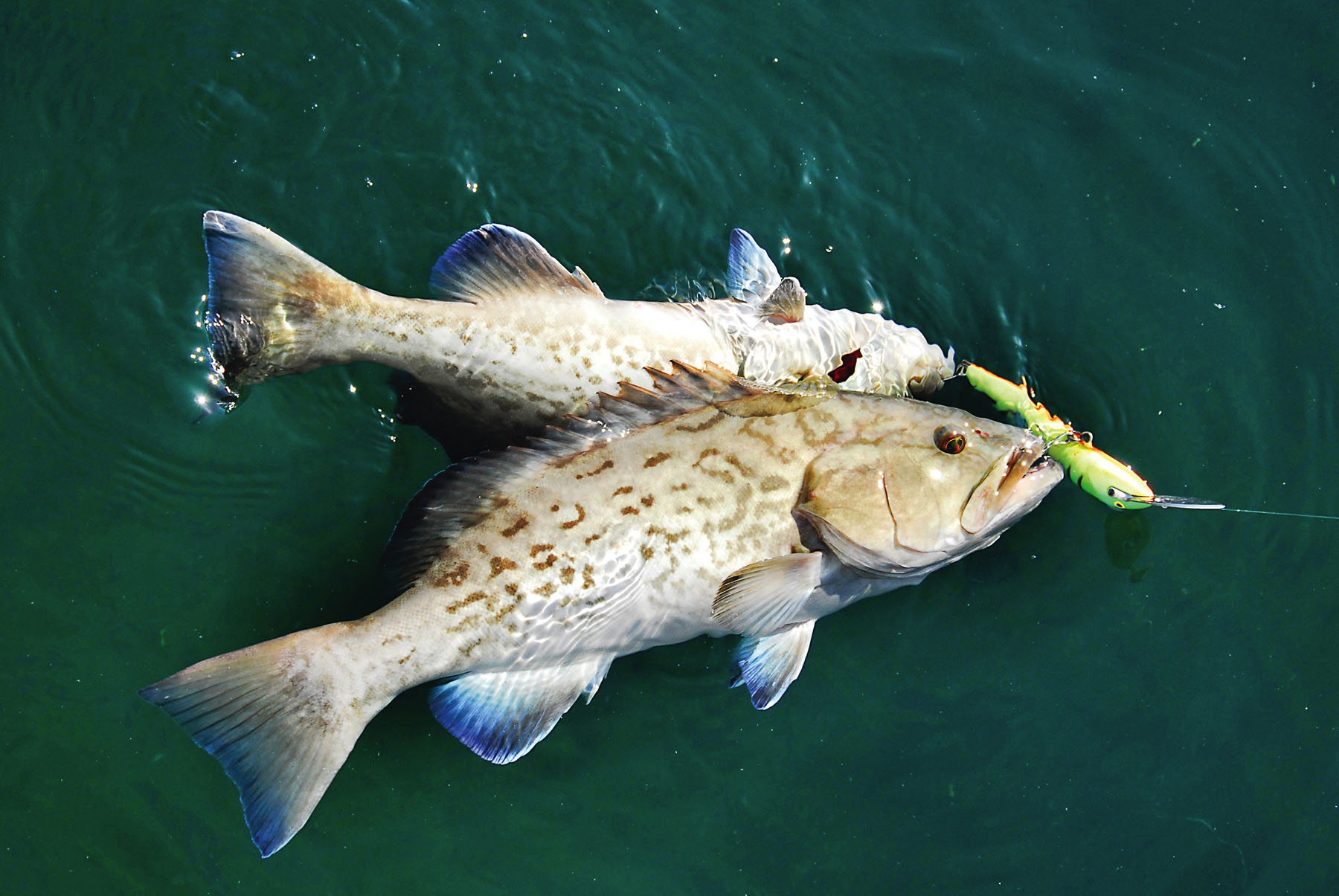 Gag grouper love deep-trolled plugs in fairly shallow water in the Eastern Gulf. (Here, a double-header). From Florida they migrate to Texas waters. Some are locally grown in Texas bays, where bay bottoms still grow seagrass.
Texas is blessed with a great many grouper species offshore, in sufficient numbers to pursue on a year-round basis. Ideally you need two conditions for grouper fishing: calm but deep water. Grouper living offshore don't care about the seasons or whitecaps above, they're well-insulated with all that water above them. Late summer generally offers flattened seas and that makes it easier to reach these fish.

Grouper inhabit a wide range of depths from 10 to 1,000 feet of water, but really dominate the depths from 400 to 800 feet. That's where you can expect to crank up grouper, though various other species share the same depths. Such depths are more easily reached along the middle and South Texas coasts, while anglers in Sabine Pass would have the longest run offshore.

Probing the depths in 400 to 800 feet means the vast majority of red snapper, whose population has really exploded, should be inshore of these depths, although it's likely some giant "sow" snapper may be found in 400 feet. These deeper depths do not offer a catch-and-release fishery; one can expect almost 100 percent fish mortality. Gas inside each fish doubles every 33 feet as it rises to the surface, so a deep-water grouper (or snapper) will balloon and float. Our grouper caught in 900 feet typically have ruptured scales, their eyes bugged out and stomachs fully extended.

All of these grouper range from edible to great on the table. Here are pictures of 16 species that should cover the entire Gulf lineup. I've left out tiger and Nassau groupers; none that I know of have been caught in the Gulf. We can thank NOAA for two of the grouper shown here, the speckled hind and graysby. The rest all came from my photo collection and web site, called Seafavorites.com.

Black grouper: Smaller specimens grow up on the coral reefs of Florida and the Caribbean, and then move into deeper water. I've only heard of a few big ones migrating to Texas waters, where they're occasionally caught around coral and rocks like the Claypiles off Galveston. This is a big, aggressive, opportunistic fish that has been known to follow boats and strike trolled baits on the surface in 100 feet of water, in the Florida Keys. Also known to carry ciguatera poisoning, because of its affinity for eating smaller fish living around coral reefs, where the toxin is produced.

Gag grouper: The gag has a much better reputation on the table, despite its name, and can grow to 60 pounds or so. This guy will follow and chase down trolled diving plugs, notably the Mann Stretch-30 plug, of which thousands were sold to boat crews along Florida's Gulf Coast. Gags start their life in very shallow water, preferably grass flats, then migrate offshore. Years ago on Halloween we caught a stringer of 10 at the South Padre jetties, on 52M MirrOlures when the water was quite clear, and should have released them all. After all, why keep a pound-and-a-half grouper that grows to 60 pounds? They should probably be protected in Texas state waters. Today the bag limit is two, with a minimum 22 inches.

It seems that gags have a population problem, protected from harvest at certain times. Gags like to bunch up in a spawning aggregation late each winter, with hundreds of females and only a few males to mate with. Why only a few? Gags are hermaphroditic and all gags are born female. They have to live a long time to change, and become males. (Big males are called "copper bellies", because of their coloring). Male gags are very aggressive, and if a boat, say a commercial boat, drops baits on a spawning school, the males attack the baits first. This makes for poor spawning success, and this scenario remains the gag grouper's Achilles' heel.

Goliath grouper: Formerly called "jewfish" or (even earlier) "junefish", these guys grow to about 800 pounds, yet inhabit depths of only 12 feet or so, on occasion. We've caught lots of them under shady mangrove trees in southwest Florida, where Naples is the center of the goliath grouper universe. Federally protected since 1990 Gulf-wide, their numbers are now such that they will attack hooked fish around the wrecks offshore in 30 to 50 feet, separating fishermen from their snook, permit, snapper and grouper, even blacktip sharks. It takes a mean grouper to eat a shark.

In Texas waters there should be plenty of goliath grouper; they're protected by murky water, the Feds, and a general lack of knowledge by many of today's fishermen. There are countless shrimpboat wrecks off the beach offering shelter to these giants, and Texas probably has the biggest series of fish-sheltering rock jetties of any coastal state. Best baits for goliaths are stingrays. If you really want to hook and release one of these giants, gig a dozen stingrays (save a wade fisherman) and use these rays with heavy tackle, each one pinned to a 20/0 circle hook, drifted around the jetties. Catch and release only, so don't drag your goliath into the boat for a hero picture, it's hard on the grouper's vertebrae. Be sure to dump your extra stingrays in the rocks when you leave; it helps sustain the local population of goliaths, and they will appreciate the gesture.

Graysby: More of a coral grouper, and visitor from The Bahamas, I've only seen one, a hefty specimen of eight pounds or so, at the Cerveza Rigs off Galveston. It was about 100 feet down and certainly a state record at the time, if we had caught it. The graysby is similar to the far more common rock hind, though the graysby's head is shaped slightly different.

Marbled grouper: This grouper always reminds me of a tripletail; it's body shape is very different from more typical members of the clan. The marble can change color in dramatic fashion, and prefers depths of around 180 feet or so. We've caught them at the Flower Gardens, and those I have dove with were about 150 feet down at the semi-permanent, deepwater rigs off Galveston. That's where a great many tropical species can be found. It seems our planted, deepwater platforms in 800-900 feet have become population islands for tropical fish from The Bahamas and Caribbean.

Misty Grouper: Commonly found in deeper waters along our Atlantic coast and The Bahamas. I haven't heard of any in the Gulf, but don't count them out. Easily identified by their vertical stripes. Their common depth is around 800 feet, according to "deep-drop" anglers I've talked to. World record is 80 pounds, so this is one of the higher-weight grouper species.

Red grouper: Extremely common off the Gulf Coast of Florida and in the Keys. I've never heard of one in the western half of the Gulf of Mexico. These guys are called "garbage mouth" because they'll eat any cut bait. Also nicknamed "fire truck" because of their color.

Red hind grouper: This is a coral reef visitor from the Caribbean, and we've caught them at the Flower Gardens at night, on cut bait. Overall, pretty rare in Texas. Small red hinds are thick in The Bahamas and fierce enough to hit trolled plugs as large as themselves.

Rock hind grouper: Very common at Texas Gulf platforms, ranging a half-pound up to maybe three pounds. The state record is around six pounds. They'll hit a small jig inside the platforms, if you pitch in back inside the pilings. Also called "strawberry grouper" because of their vivid reddish spots.

Scamp grouper: Tastiest of all grouper, with the whitest meat. That means they don't fight too hard, but they're a serious bonus on any snapper trip. They frequent offshore rocks in 100-200 feet and seem to mix freely with red snapper.

Snowy grouper: A deepwater fish, those that we have caught all come from about 900 feet. That means cranking up a lot of line, but a 50-pound "snowy" is always welcome in the fish box. I've talked to Florida Atlantic anglers who have never heard of snowies of that size, but I told them it was in Texas, where all fish grow larger. We caught ours on large fillets of blue runnerfor some reason blackfin tuna strip baits didn't work as well.

Speckled hind grouper: I haven't actually seen one of these in the Western Gulf, but a friend, Alan Reynolds in Port Neches, saw one landed in about 600 feet out of Venice, Louisiana back in early June. They were making grouper "deep drops" and caught a mixed bag.

Warsaw grouper: Big Warsaw, growing to 300 pounds or more, were once so common on the snapper banks off Port Aransas that Florida Roberts, who pioneered snapper fishing out there in the 1930s, reported having to pull anchor and move, when too many Warsaw showed up, eating his snappers off the handlines. Today, Warsaw populations are stressed and only one is allowed per boat. Smaller specimens are caught in perhaps 70 feet of water, and then the big boys gradually move offshore out as deep as 1,000 feet. Most big Warsaw years ago were landed by the partyboat crews on the typical 80-200 foot snapper rocks during late winter and early spring, when these fish were spawning in (for them) shallow water.

Yellowedge grouper: This is a deepwater fish and fairly numerous; commercial boats target them with long trotlines on the bottom. Also tasty. If you can find rocky bottom in 400 to 800 feet, trying drifting with big cut baits on bottom. If something bites, most likely it will be a yellowedge.

Yellowfin grouper: Another mid-depth coral visitor from The Bahamas. They have two color phases, sometimes a mild brown with markings, other times a vivid red. Found in 100-200 feet off Texas, over rock bottom with coral outcrops. The specimen I caught in the picture hit around midnight, about 120 miles southeast of Sabine Pass. These fish are such reef hounds, that they've also been implicated in ciguatera poisoning, guilty of eating too many tropical reef fish.

Yellowmouth grouper: A close cousin to the scamp, and the two are difficult to tell apart. Those I have seen were observed while scuba divingI'm not sure we've ever caught one. They seemed to prefer living at mid-depth, half-way down on the Gulf platforms sitting in 180 feet or so.