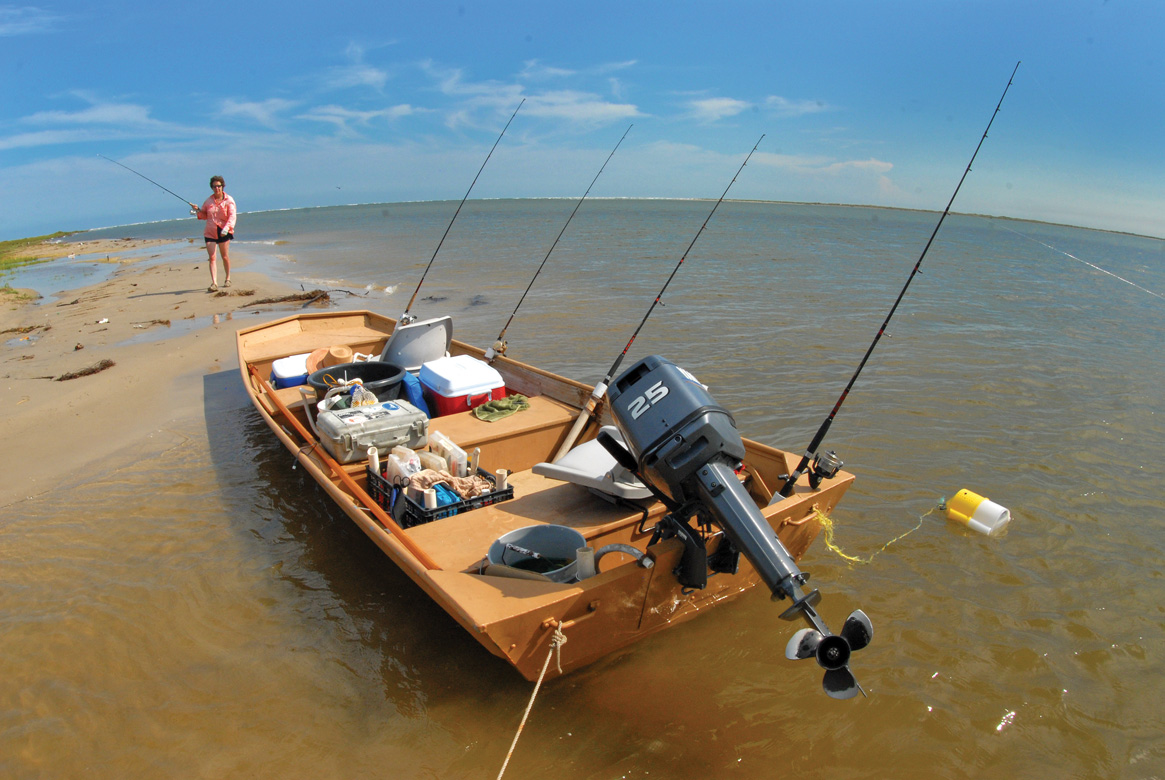 Old Yellow at Pass Cavallo last summer. Rigged with four rod holders on the starboard side, so it could fire off a broadside of natural baits.

Buying a new boat is always cause for celebration, at least for a time. Recent years have shown a huge trend and a dazzling display of bigger and faster and prettier boats on the bays. But somehow I’ve gone in the opposite direction. After decades of owning fiberglass boats up to a 25-foot Mako, I recently purchased a new 16-foot AlumaCraft jon boat in the customary olive drab paint. And then through Craigslist, sold off the old 15-foot Monarch, a jon boat that has seen countless adventures in 30 years. Even when we had fiberglass in the driveway, we always kept aluminum somewhere in the back yard. Low maintenance and ready to go.

And now 49 years have come and gone of my running aluminum boats in saltwater, starting in 1968 in Sabine Lake with a Gibson 12-foot v-bottom. Most of my high school buddies had jon boats. And the same with college a few years later—those guys still have aluminum boats. Even at our age, they still trout fish in summer and duck hunt POC in winter. Bunch of old guys, survivors of countless cold fronts while running back routes to the Army base on Matagorda Island and camping there. I can’t conceive of a bad enough situation where these guys could get in trouble doing so, after making so many runs since 1977. I think that was the year we started camping there; it was run by the Feds then. We were the only campers and pintail ducks were plentiful.

We still hang out with these boats in Port O’Connor each summer, catching slot reds and some nice jetty trout, too.

A new boat. But after 30 years it wasn’t easy parting with Old Yellow, the 15-foot Monarch that saw so many trips. I hand-painted it Parker paint’s “dead grass” in recent years while I was briefly stationed way up north where it snowed 24 times the first winter, and where big flocks of greenheads circled to land in the spread. By November there is no surviving green vegetation up there, so the yellow camo was perfect. Back down on the Texas coast each summer, that boat stood out with its odd coloring, but still kept catching fish. Even a couple of kingfish at the POC jetties, one of which ripped a rod holder loose, though I saved the rod from going overboard and still caught the fish.

And now, a new boat with no more leaks. I don’t even have to pull the plug when we drive home from the ramp. No cleanup: there’s really no need to rinse an aluminum boat after a river or lake trip. At day’s end during saltwater trips, I back the boat into a local freshwater river, submerge the trailer and run the motor for five minutes. In this way my trailers have lasted a long time. The new boat has a new McClain trailer that tracks well on the highway, even the Interstate, and aluminum is so easy to move around from one state to another.

This new boat may be a lucky one: On it’s first trip in early November, a late season tarpon of 100 pounds or so suddenly bent over a spin rod and took to the air, completely catching us off guard. My buddy sat their stunned, but I grabbed the anchor out of shoreline grass, jumped in the boat, cranked the motor and hit the throttle quicker than a cat can lick his ass. By then there was only 20 yards of line left on the reel. We caught up with the tarpon, which jumped seven times in magnificent fashion, and then towed the boat a half-mile straight offshore. We were under-gunned with only 25-pound line on a sailfish rod, but the red circle hook rigged with only four feet of 50-pound leader hung on.

The fight went on and on, and a boat approached from far away, they’d seen the tarpon jumping. They followed with their electric motor and both guys filmed with their I-phones and we were heroes, just for one day. But the angler with me was out of practice, possibly a rookie using spin tackle, and had wound on the reel incessantly before I cautioned him to stop. By then he’d kinked the line badly. Which finally broke after I’d climbed on the bow and caressed the taut leader four times, knowing better than to grab it. Dow! The angler fell backwards onto a newly painted beige deck board that Amy and I had just cut and triple-painted a week before; he lay there and said it still smelled of fresh paint.

Well, they say if you leader a tarpon it can be considered caught, but I wanted better pictures than were taken when it rolled on the surface gulping air.

A week later, Amy and I made a meat run in the new jon boat. Slinging gold spoons, we landed 17 Spanish mackerel, eight trout and an assortment of other fish. Those autumn mackerel were big and the freezer was packed for winter. We’ve eaten a lot of fish species in our 30-plus years, but far more baked mackerel than anything else.

Those first two trips with the new boat were serious confirmation that an inexpensive boat can put you far beyond the crowds, and onto quality fish.

New boats have to be tweaked, of course. Bought cheap from a stack of aluminum boats at a dealership (just the way I like it), we cut the deck boards and added dock and anchor cleats, five rod holders and three boat seats. And installed the motor. The new trailer was coated with GPS spray anywhere that looked like it might rust. Added a tongue jack. Adjusted the carpeted boards and winch to fit the boat. Tried to waterproof the tail lights.

Everything works, anyway. The rod holders scattered around the boat are strong enough for a tarpon’s strike. The floorboards are stout, and prevent any wear from heavy foot traffic. Yes, a welded Sea Ark heavy gauge aluminum boat would have been better, but we were determined to stay within our budget, and this boat will probably outlast me anyway. (Maybe.) So, this year I’ll be waiting for big tarpon, and will use Shimano 20 reels with 50-pound line, tough enough to handle even a state record tarpon. I’d like to see the boat towed for a couple of miles, even five, if we have enough daylight. My threshold for fishing excitement may be a little higher than most.

Long fights with tarpon after dark can get tricky, which I’ve seen a few times from bigger boats. We also hooked a huge tarpon in daylight from a 14-foot jon boat that put the fear in Shannon Tompkins and me, it was like the old man and the sea. We were never so glad as when his 50-pound line broke with that tarpon in the air, towering over us. We clearly had no business with that fish, while we were anchored in Pass Cavallo with a swift outgoing tide.

Anyway, got to love these aluminum boats. Light enough to be trailered behind a car on the Interstate, capable of roaming the Gulf Coast from South Padre all the way to Key West, which I’ve already done. The Yamaha motor gets up to six miles a gallon, so this is a very economical venture. Compare that against heavier fiberglass, bigger outboard(s), a big fuel tank, lower fuel mileage and a much bigger tow package.

Over the years, I’ve forgotten about countless trips in jonboats, but clearly remember those where kingfish were landed. Our biggest ling landed from a jon boat weighed at least 40 pounds. We’ve tied to and climbed a number of Gulf platforms with these boats, mostly years past when we were more agile but also two summers ago. And we‘ve made what seems like a thousand jetty trips—surely less, though maybe not. From Sabine Pass to South Padre. We trailered two different jon boats to Key West back in the early 1970s when we didn’t have a bigger boat available. Back in the days of Jimmy Buffet, hitting the same three bars at night, when staying in Key West was very inexpensive. Never did see Jimmy; maybe he was on tour. With those light boats we spearfished the reefs and once, camped out at Boca Grande Key, about 15 miles to the west within sight of the Marquesas. Not bad for a 9 ½ Johnson motor on a tin boat.

Almost anyone can afford this kind of fishing action, though Key West is long past redemption. We are looking at staying in the Upper Keys this summer, if we can find a good deal on a B&B. I would still get a kick out of running a jon boat in blue water along the outer reef there, where you can see 60 feet down.