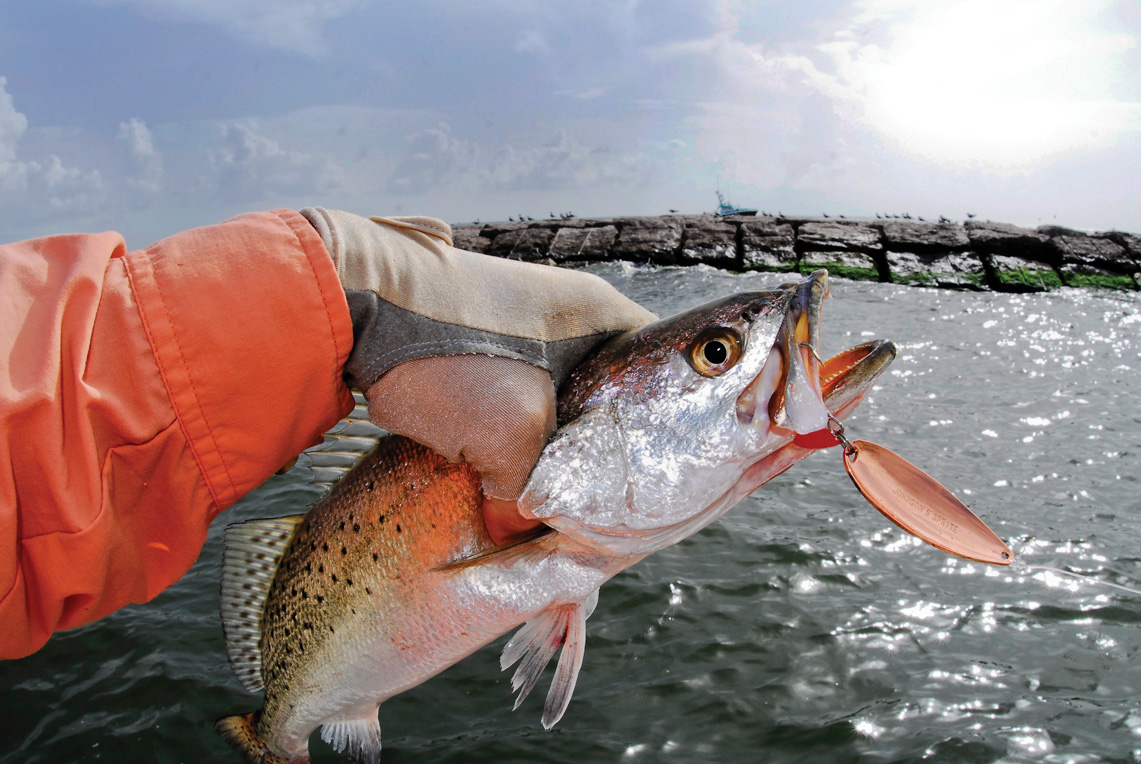 Slinging spoons at the jetties, a favorite pastime for catching trout. This is actually a copper spoon rarely used, borrowed only minutes before.

March could be called official spoon month on the Texas coast; that’s when our first spoons of the year are used—from now through November. Over the years we’ve spent countless days slinging these fluttering, slow-sinking, metal lures. Today we don’t see them on the coast like we did 30 years ago, which begs the question: are spoons becoming a lost art? Store aisles are crammed with all manner of colorful plugs and plastics these days, and spoons can be hard to find. They’re not as pretty (unless you worship gold) and resemble nothing that lives along the coast. Yet the flash of a spoon will “flip a switch” on passing predators, who sense a wounded baitfish and an easy meal.

Back in the day I often burned through 12 cards of gold spoons in a year. The losses always began in March, often at the Port Mansfield jetties where the water warms early. One day at the end of the rocks I was cleaned out, all 12 spoons gone, just gone. Huge, thuggish jacks had been unstoppable with the Ambassador 6000 reel. When a hundred yards of line was stretched out to the horizon, I’d thumb the spool and break 20-pound line way out there at the knot. It’s a handy trick because it was the only line I had. But my spoons were gone, and there was nothing to be done. No replacements in sight, either, only water and blowing sand in the dunes. It was time for Plan B. Back at the car, I dug out a castnet and soon found a nearby pond with marsh minnows. Using them around submerged rocks, safely away from prowling jacks, we soon put together a fine stringer of flounder.

Similar spoon losses were experienced on the upper coast where we lived, mostly from rocky snags and mackerel, along with a few big tripletail diving into rusty structure off the beach. Further offshore, ling, snapper and bluefish were hard on spoons, too. Today, losing so many lures seems difficult to believe. How do you reconcile losing 144 spoons in a single year? It’s an indication of how hard we fished back then, and in hazardous water filled with structure and snapping teeth. The fish we caught made it all worth it.

We seldom used bait and couldn’t afford a tackle box full of Bingos and MirrOlure plugs, because schools of sharp-toothed mackerel were common in our area. We couldn’t use wire leader either, as trout avoid wire like the plague. And we were there for the trout, mostly—thousands of them. Not too big, mostly two and three-pounders. A seven-pounder was about tops each summer. If we’d thrown bigger plugs, we’d likely have put a 10-pound trout on the wall. But we were after action and numbers, and spoons provided both.

I’m not the only fan of spoons. Today, whether in Texas or Florida, it’s a simple matter to toss first mate Miss Amy a gold spoon and watch her go to work. She’ll sling that piece of metal for eight hours, work it and catch all manner of fish. Better than me, truth be known. With 37 years of experience, she has an unwavering faith that a fish will grab on with the next cast, which counts for a lot, because confidence in a lure is half the battle. Or so they say.

Spoon fishing made an early impression on her, beginning in 1980 when we were newlyweds. Using battered 3/8 ounce gold spoons on Labor Day, we boxed almost a hundred pounds of big Spanish in two or three hours. It was furious action and our small boat was an awful mess. No bag limits, in those days.

The following summer we entered our first local tournament. First day out, I landed a 6-pound trout at the jetties with a gold spoon, probably big enough to win, so next morning we headed offshore. After an epic battle Amy landed an amazing 38-pound kingfish, without a leader; nothing but a gold spoon. Both of us were using Ambassador reels filled with tough 20-pound Ande line. With the very same spoons, I had a first-place trophy and her kingfish was tied for first place. To this day, it’s our biggest king caught on the lightest line.

Friends Pete Churton and Dale Fontenot in the Beaumont area have taken spoon fishing to a whole different level. After catching many trout together at Sabine in the late 1970s, Pete became a solid fan of spoons and began taking them offshore as far as 50 miles, stopping along the way at shallower Gulf platforms in 40 to 50 feet of water. Their strategy was simple: tie up to favorite rigs and sling metal in all directions. Or drop spoons to the bottom, and jig them back up.

It requires patience and stripping lots of line to allow a spoon to flutter deep. Always impatient to get down there quickly in the strike zone, I mostly use fast-sinking leadhead jigs offshore. But Pete and Dale have persevered all these years with slow-flutter, one-ounce silver spoons, perhaps more than anyone who ever fished offshore of the Texas coast. Who knows?

Pete’s best catch with a spoon was a 55-pound kingfish landed and released, caught way offshore, 50 miles off Sabine at the WC-352 rig that was sadly cut down and removed two or three years ago. They’ve caught all manner of fish out there including ling bigger than 50 pounds, and big “sow” red snapper, among other species. On the way back in, they might stop at the jetties if the water is green and throw the very same spoons for trout and redfish. (Pete buys his spoons in bulk on the Internet, from Double X Tackle in Colorado.)

Today, Amy and I stick with Johnson Sprite gold spoons, either the single hook weedless variety for redfish on the flats, or the treble hook model. Pin a chartreuse twister tail worm on that single hook spoon, and you’ve got a tempting bait for redfish even in a foot of water. The treble hook model handles anything else. In fact, on a recent Florida trip, Miss Amy landed bluefish, grouper and even a 44-inch cobia on the same spoon. Our fishing records show that last March 28 and 29, in the same area, we drifted over grass bottom with an average depth of six feet of water. In two days we landed 90 trout up to 22 inches. Released a bunch of 20-inch trout, which you don’t see every day. They were caught almost entirely on gold spoons, with a few on Rapala X-Rap plugs. Oh, we had a time out there. When describing the trip to other anglers, and how we caught so many on spoons, they generally looked puzzled. Say what? Maybe they didn’t believe us. I’m starting to think there are a lot of coastal anglers who have never thrown a spoon, or gave up on the idea after a few casts. Even the local tackle-store owner seemed mystified.

Spoons don’t always work, of course. We’ve been badly out-fished several times, by other boats using live bait or soft plastics when the water was murky. Spoons require fairly clean water, and we always hope for dark green water in the Texas surf, jetties or bays before throwing a spoon.

Today we carry a variety of lures to cover the bases. And I can still throw the castnet manually if we need live bait. But rest assured, gold spoons continue to hold a permanent spot in my tackle box.