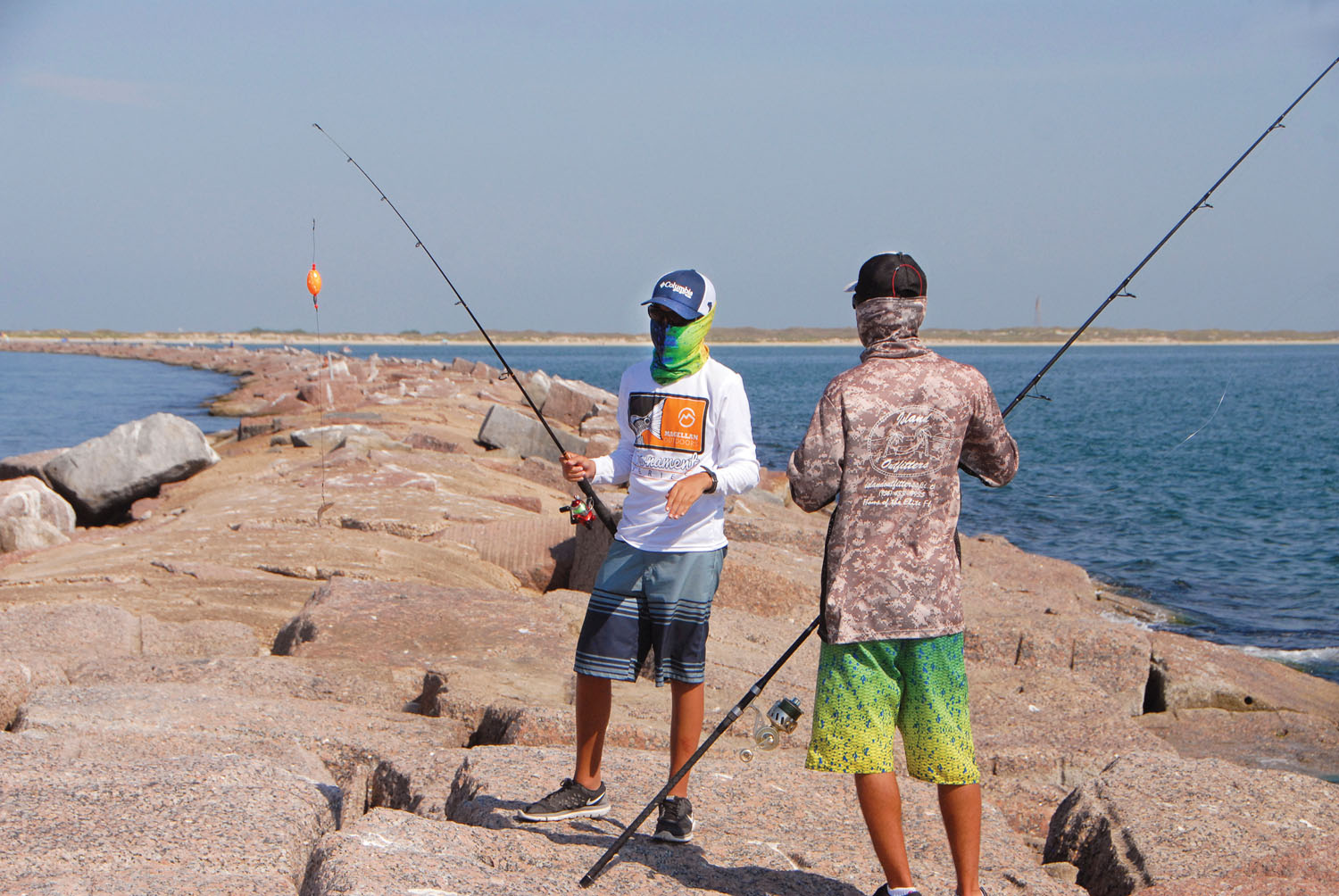 Two young anglers at the end of the Aransas jetty, wearing better sun protection than usual.

A recent visit to the dermatologist spelled another encounter with the knife, and it left me pondering all those fishing trips over the years, where we didn't cover up from the sun. Seventeen stitches in the back, this time. It looks like someone stuck a Bowie knife in my back for no reason... Fortunately I can't see the scar without two mirrors, so I haven't bothered. Got another 17 last year in my right calf. My doctor likes to dig around.

Some people have skin cancers much worse, like on top of the head. My fishing buddy Pete in Beaumont got 30 across the face last September; they peeled him open like a trout. He said later it reminded him of Frankenstein until the thick, black stitches were removed. Leaving no scar behind. His doc did a heck of a job.

So, here we are ready for another year of sun exposure. It's suddenly Spring Break, when many of us hit the water or beaches, and awareness of skin damage is on the upswing. Here in Texas we've come a long ways in covering up from skin damage, just in the past seven or eight years. Back in 2009 we had a horrible drought on the Texas coast and the countryside looked something like Australia. The sun was relentless, while I was fishing around Port O'Connor. To cover up I kept a handful of bandannas, and I'd wrap one around my face like a train robber. I was just starting to wear long pants and of course we all had the long "Columbia Wear" type of shirts since the early '90s. But what a year, 2009: Every day that summer the sun beat down like Perdition. Not once that summer did I see a Buff face wrap like they were already wearing in Florida. Nor did I see another cheap bandanna, just lots of red faces at the fish-cleaning table.

Face wraps are certainly prevalent now; they're almost a fashion statement for coastal fishermen. But at least they offer sun protection. And it's a pleasant change after all these years, going out to dinner on a summer evening without a burnt red face. These masks aren't completely sun-proof, and smearing a little high-octane sunscreen under them is also good advice. Beneath a good hat that creates triple protection.

The Texas coast is a treeless expanse, save for Rockport, and so we have to carry our own shade with us; getting out there in the boat is like being in the Sahara desert. A boat's T-top feels great and the meager shade and lower heat is precious, but we still get zapped by the sun from different angles, reflected off the water. That's even hard on the eyes, and one more reason to wear quality, wrap-around sunglasses on the boat.

Walking and plugging the Aransas jetties last summer in July, I took the early ferryboat over, and dressed for the worst the sun could offer up. Covered from head to toe. The wind died and the Gulf grew flat, it was pretty hot out there. Way out on the end of the north jetty, I was impressed to see these young dudes, maybe 16, wearing the latest in high-tech sun protection. Teenagers? No way! But it was true. They were serious fishermen looking for tarpon and they shook their heads when this aging ferryboat loaded with fishermen anchored close by. "Scaring the tarpon," they said. I didn't catch their names, though they are regular readers of this magazine.

The sun got worse and I hustled back to the beach, determined to catch the noon ride back. But there was a line of people waiting, many without hats. They stood patiently on the seawall and just behind us were burning sand dunes. When the boat finally arrived, (the same small ferryboat from the 1980s), there was only room for maybe a third of us. I was the last one allowed on the boat and behind me people were left to their fate. I'm not sure when they escaped St. Joseph Island. The teenage girl just ahead of me was carried unconscious onto the boat; when she collapsed beside me it was lucky she didn't topple down into the rocks. I carried her baseball cap and her dad and boyfriend carried her. And it was still only noon... It made me wonder how many people have been carried onto that boat. Once back in Port Aransas I crossed on the car ferry back to the mainland, and measured a line of parked cars 2.3 miles long, waiting in the broiling sun.

Hot weather in Texas: All we can do is cover up, and carry water and food with potassium like the lucky (or not so lucky) bananas, pickles, raisins, watermelon and guacamole. We've actually sipped pickle juice instead of beer after a hard day on the boat. We also use a high-SPF sunscreen like Neutrogena 50, my favorite. I'm also a big fan of wearing fishing gloves for about six years now, since skin on the back of the hands is thin and prone to skin cancer. I've tried a few brands of gloves and still favor the Buff Pro Series sun gloves that are tough enough to handle even offshore fishing. They also prevent the usual cuts and scrapes when handling fish.

Doctors say it is sun damage caused from years ago, that eventually returns to torment us. In the meantime I'm not taking chances with new burns. If you fish out there every day for weeks, that's a lot of sun exposure. It makes me wonder how the bay guides survive to retirement age.

As always, good clothing is the most effective method of sun protection, so use densely woven and bright- or dark-colored fabrics, which offer the best defense. T-shirts are fairly bogus for sun protection, and even worse when they're wet. I've read that a thin white T-shirt provides a UPF, or Ultraviolet Protection Factor of about 5, while blue jeans provide something like 1700. Since you can get skin cancer anywhere on the body, the more skin covered up, the better. As for sun screen, my wife and I have always felt that many of them actually promote long-term skin damage, because many people believe smearing on ointment is just as good as thick clothing. While you may not redden that day, the damage is done deeper down in the skin.

Any coastal guide knows that wraparound sunglasses shield the eyes, and doctors say they help prevent cataracts or melanomas to both eyes and eyelids. Hats make a big difference, of course. Use a brim of three inches or longer. Ear flaps offer ear and neck protection. I've never understood why some guys wear golf hats in the hot sun; that seems like a recipe for either getting your brain baked, or future cancer on the top of the head. I already know one guy who has died from the latter. He was from Austin, loved jetty fishing, and now he's gone.

According to researchers, "A sunscreen's SPF, or Sun Protection Factor, measures how long unprotected skin can be exposed to the sun's shortwave, ultraviolet B (UVB), rays before burning, compared with how long it takes to burn without protection. If used correctly, sunscreen with an SPF of 15 would prevent sunburn 15 times longer than if the product weren't used. Sunscreen with an SPF of 15 effectively filters out about 93 percent of all incoming UVB rays, while SPF 30 keeps out 97 percent and SPF 50, 98 percent. These higher SPFs can make a big difference over time.

However, a high SPF alone is not enough. SPF offers protection against UVB, but not against the sun's long-wave, ultraviolet A (UVA) rays. New research shows that UVA penetrates the skin more deeply than UVB, causing as much or even more damage. UVA is also the key cause of sun-induced skin aging.

I've seen advice to use sunscreen every day of the year, though I've never heard of anyone doing that. It might be best in the long term, but I never cared for smearing that stuff on. That's why I cover up with sun-blocking clothing. I started off cheap with doctor's scrub pants back in the '90s. They cost a dollar at Goodwill, they were light and compact, can be pulled over shorts, and they have saved many hours of sun exposure. I now wear long fishing pants.

What to watch out for

We all have skin in this game, so to speak. There are precautions to take, but then there are bad signs to watch out for. A yearly checkup doesn't hurt; I once had an entire team at a university skin care clinic eyeballing me, while I sat there beaming back at them in my boxer shorts with a few scars here and there. Anyway here's what they were checking for – perhaps a freckle or other growth that: