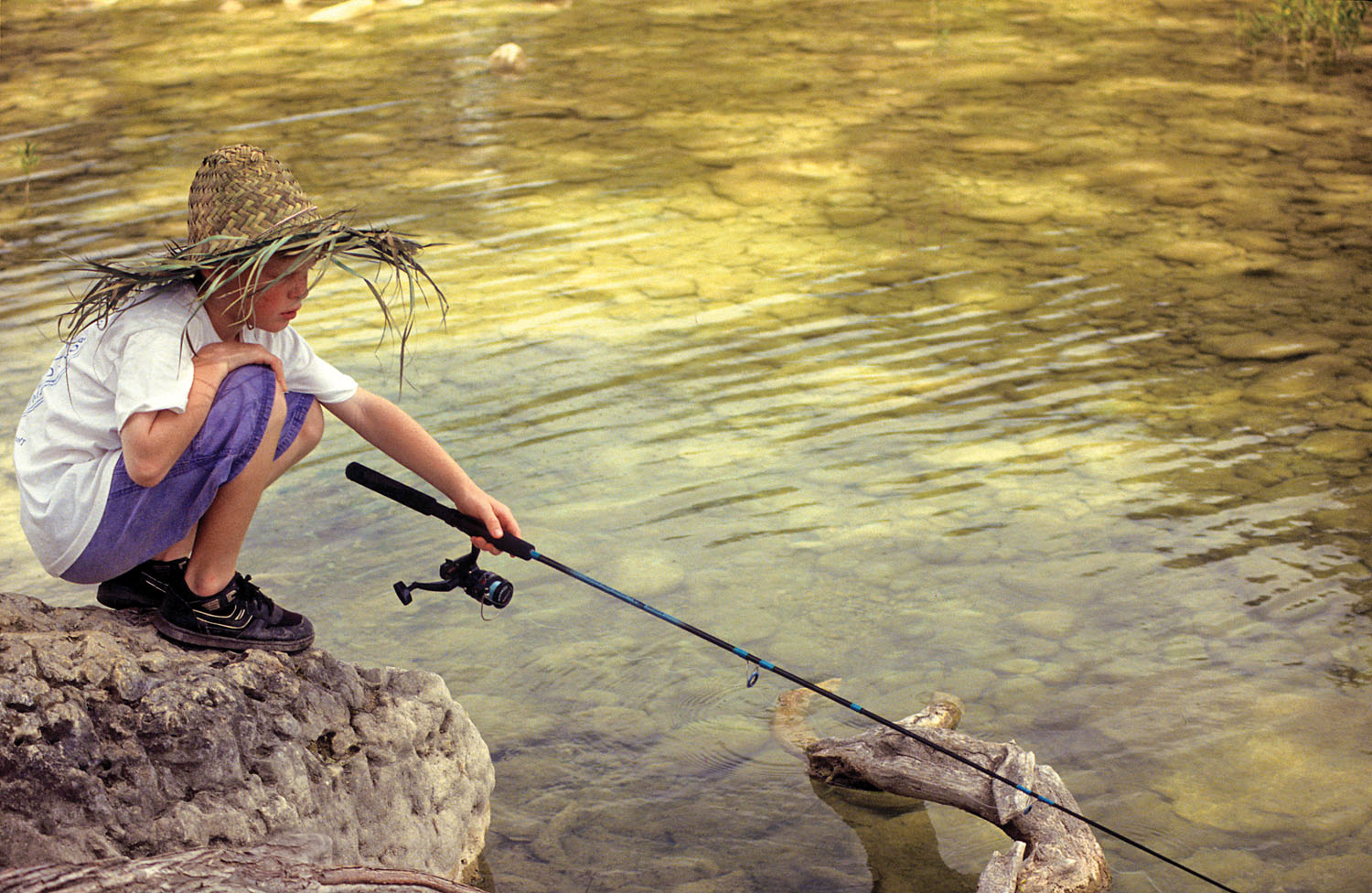 Here’s an idyllic scene on how most kids should start out fishing. Frio River in mid-summer. Not much action.

You never know what effect that first fishing trip will have on a youngster. Hopefully it won’t be a negative experience, but a memory they will treasure. Growing up, the older generation used to say that fishing would help keep a kid off the streets and out of pool halls, and, as it turns out, they were probably right. Except today, it’s not the pool halls we have to worry about so much, but glowing electronics that our younger generation (and even older) seem glued to. Countless American kids these days could benefit from more time in the great outdoors. In fact, there is even a term for it—nature deficit disorder—coined by author, Richard Louv, who wrote a well-researched book on the subject, Last Child in the Woods: Saving Our Children from Nature-Deficit Disorder.

His book made me think about how much fishing broadened my own horizons.
I started early and, though clearly deprived while living in Lubbock, it did offer up bullhead catfish and bluegills. After finishing the eighth grade, the family moved to coastal Port Arthur. I was suddenly in outdoor heaven, fishing the same day the moving truck was unloaded. Soon, I was hanging around local marina docks, and one day a captain named Seaweed let me jump aboard for a trip offshore, and I’ve always been grateful to him.

A fishing trip is an easy, outdoor getaway with a short-term goal, catching fish. (The long-term goal, helping build youth into well-rounded adults, is more complicated.) Not all of them will like boating or fishing. But take a few kids out in the boat, introduce a little scarcity or hardship, and some of them just seem to find their mettle.

My fishing mentor, great uncle Wib, would have scratched his head over today’s recommendations for getting younger kids started: fish quiet water, target small fish easy to catch, simple tackle, plenty of snacks, nice weather, safety, encouragement, and not a long day. Visiting him several times in Florida, we fished from his small boat with a ponderous 40 horse Johnson out of Flamingo, north of the Florida Keys, and those trips stretched from predawn to barely making the house at sunset. We caught mostly trout and mangrove snapper, but maybe a dozen other species, even tarpon.
A case of soft drinks, mustard sardines and Vienna sausages was standard fare.
He had one old cooler with a block of ice; soft drinks and fish together. If we wanted ice, there was a rusty ice pick… Even with those Spartan conditions, I got the fishing bug real bad.

Years later I would have two sons, who were soon introduced to the Gulf. Fortunately, they were also exposed to quiet waters while visiting grandparents in North Carolina during a few summers, where they snatched dockside bluegills and sometimes a huge carp. The rest of the time, while living in Houston, Fulton and Port O’Connor, they were carried along on all sorts of saltwater trips and campouts not generally recommended for the young.

Walking the jetties, hand-lining snapper offshore, fighting big jacks in the bays with spin and heavier tarpon gear. Or sitting all afternoon anchored in a choppy Pass Cavallo, waiting for tarpon, the boat rolling badly, everybody sweating in the August heat. As far removed from bream fishing as an angler can get, save for billfish trolling. Amy and I owned two boats with cabins under the bow, a 22-foot AquaSport and 23 SeaCraft, where the kids could nap and hide from the sun, cold, rain, lightning, and jumping tarpon. Pillows and toys helped. You can see where this is going, we’re getting a long ways from quiet ponds and hungry bluegills. The kids were outdoor troopers living in Port O’Connor for five years, far removed from city dwelling.

Coastal fish were tough and the weather seldom perfect. The kids could have been left at home with a baby sitter, living a sheltered life until they were 10 years old or so, but they would have missed a great many family adventures. The furthest afield we ever took them was a three-day campout at Fort Jefferson, 68 miles off Key West. We were delivered by Cessna floatplane, and young Joseph was still in diapers. There was lots of fishing and snorkeling. We liked it so much, we returned three more times as the years went by and the kids grew older.

Advice on taking a kid fishing always says to bring snacks on the boat. When Amy was aboard, we always did. Sometimes the big bag of Cheetos flew and spilled all over the deck, testing my patience.

When fishing just with me however, rations were sometimes scarce but I think they got used to it, or hope so. During summers in POC, their older cousin from North Carolina would often stay with us. He arrived each year pale and very much attached to television, soft drinks and hanging out at the local mall. But after six weeks in POC (and camping on the Frio River), he returned to Carolina 10 pounds lighter, tanned, with a clear head and lots of tales. Today, he is successful businessman in California. I recently emailed him about memories from those summer days in POC and he quickly wrote back:

Memories? How about offshore, hunting for an elusive whale shark [seen a day earlier around the MI-669 platform] and while there, never seeing a thing, and then skimming off its head on the way back in? [We accidentally ran over a surfaced whale shark two miles from the rig at a color change, and it knocked the 150-horse lower unit clean out of the water, like hitting a sandbar. I’d slapped the motor into neutral at the last moment. The shark was 25 to 30 feet long]. All I remember is the tail raising out of the water as it retreated below, but I'm sure you saw more while driving the boat.

Snorkeling around an oil rig for hours and then later trolling around it, and catching what to me was the world's biggest barracuda. That scared the crap out of me.

Heading out to an oil rig on a big boat (can't remember if it was a supply boat or what) with you guys. I ate an entire bag of Cheetos while sitting at a table down below and ended up puking my guts out the rest of the way. When we arrived at the rig it was night—we fished and brought in one shark after the other. I haven't touched a Cheeto since that trip.

Younger son Joseph then wrote: Some of my best memories of childhood involve adventures with my Dad on the Gulf. We'd go out for bull redfish on hot, windless days. Or he'd drop my brother and I off on Matagorda Island with a local baby sitter, to wander for hours amongst the dunes and cactus while he fished off the beach. We'd make shelters out of driftwood, and build huge fires on the beach at night and chase ghost crabs around our little camp. On winter nights, he'd pull me along in the jonboat, holding a searchlight while he silently waded with a gig, stabbing the dark water, heaving flounder into the boat. Big ones…

And then older son Ian, settled down and working in Italy, writes:

Going fishing, and being outdoors in general, as a kid warped and molded me more than anything else. Patience, persistence, a respect for the natural world, a love of adventure and old wisdom, appreciation of life and death. Upon reflection, these are all probably bad habits I may have picked up while fishing. There are worse habits than these, which I also recommend. But do watch out. You could get bit!

I’m pleased to report that all three still like to fish all day with me, when they visit. None have the fishing bug or own boats, however. Perhaps they already have a lifetime of memories.

I say take a kid fishing. And leave the optional electronics at home, if possible. It’s discouraging these days, the number of people distracted by their I-phones, their minds elsewhere, ignoring their surroundings. Things have changed fast in the past 20 years, and not always for the better. Kids and even adults are more nature-deprived these days, sheltered and distracted. When fishing, they should be aware of their surroundings. Wind, water and tide, heat and cold. And nearby wildlife—elemental things like that. You know, like people did for thousands of years.

“Time in nature is not leisure time; it's an essential investment in our children’s health (and also, by the way, in our own).”
“We have such a brief opportunity to pass on to our children our love for this Earth, and to tell our stories. These are the moments when the world is made whole. In my children's memories, the adventures we've had together in nature will always exist.”  ―  HYPERLINK "https://www.goodreads.com/author/show/90594.Richard_Louv" Richard Louv, Last Child in the Woods: Saving Our Children from Nature-Deficit Disorder