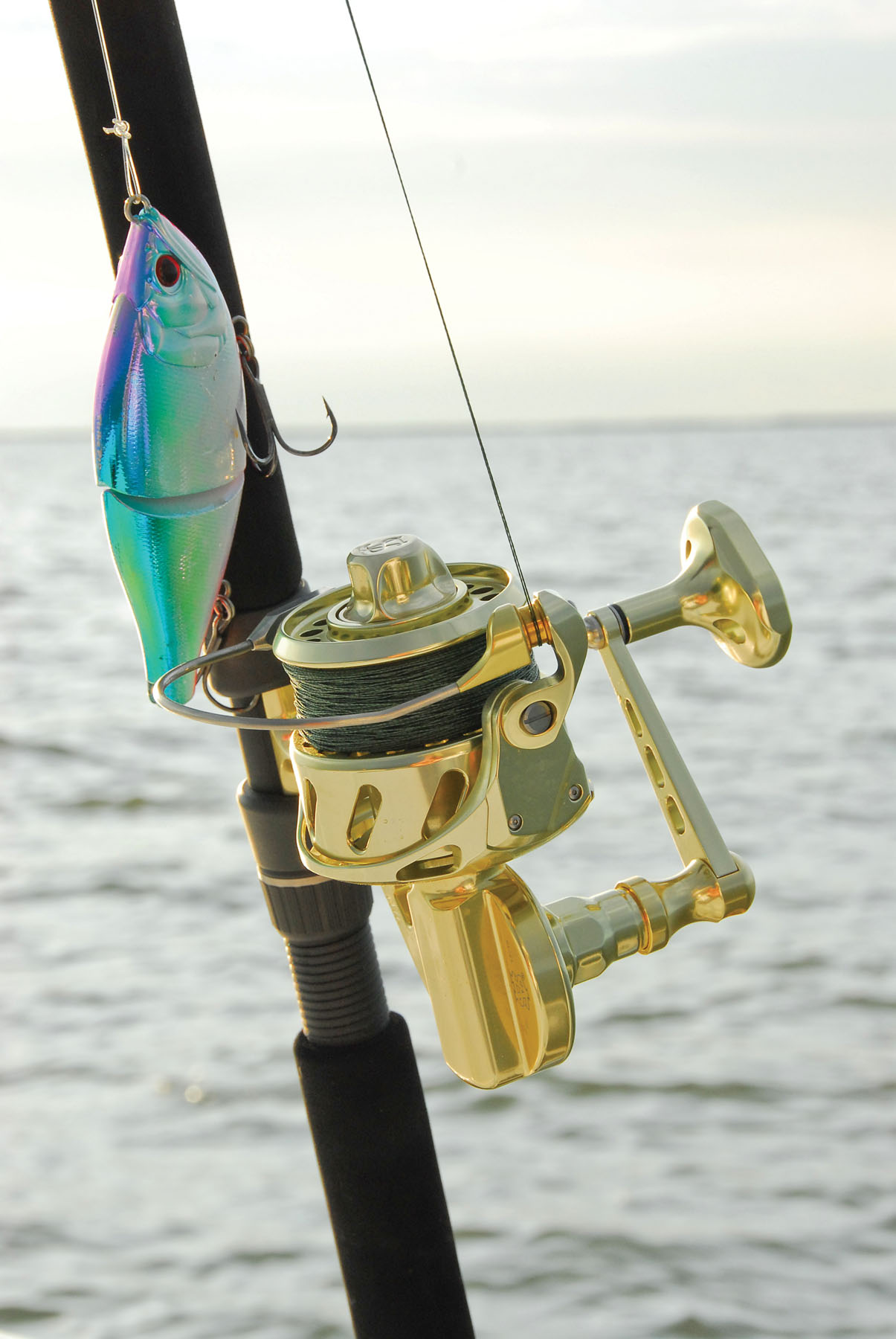 November is the last month for catching Texas tarpon - at least for a while. There's still time to catch that trophy, however, and the following provides a few pointers. Catch them now, or start dreaming about next season.

First thing to remember: This is big-game fishing and a bristle of trout rods are completely useless unless you're hunting small jetty tarpon close to the rocks. Except for specialty fly-fishing, big tarpon require heavier tackle. They're strong, frequently crazy, and even have different personalities. Fight several fish for an hour or more, and you pick up on this. A big, cagey tarpon that jumps only once will save his strength and gulp air at the surface to regain energy. He won't wear himself out jumping, and may fight way past sunset, hoping you'll give up, instead of him.

That happened twenty-three years ago with our first Texas tarpon, hooked on a ridiculous eight-foot surf rod with big spin reel and new 20-pound line. Tarpon legend Tom Gibson gave me a seven-inch, orange Rapala diving plug with trebles removed and a big circle hook wired on top. While we were anchored it would require casting, thus the surf rod. The strike was amazing about twelve feet away; the huge fish tail-walked past the motor and Hit the dirt! Our two young sons dove into the cuddy cabin. I hung on, impressed that a 16/0 circle hook held tight with only 20-pound line. However... you can't move a seven-foot tarpon around with a whippy rod, at least not while anchored. We didn't care to move, with big tarpon rolling at point-blank range like dolphin. But pulling on this hooked fish was pointless, so we set the bowed rod in a holder, rigged up heavier tackle, and jumped or landed four more tarpon as the sun went down. After several hours, that bent surf rod was finally dealt with in pitch darkness; Miss Amy pulled back and crack! The knot gave at the spool, leaving it empty... relieved to rid ourselves of that fish, we bird-dogged Dave Sullivans boat in inky darkness back to the dock, tarpon fans forevermore.

Tackle
After that fateful day, we pursued tarpon with a passion, using our 40-pound kingfish outfits. We pretty much ruined that gear; Shimano TLD-15s and Ambassador 7000 reels were never designed for many hours of brutal work, using fairly heavy drags on tarpon measuring up to seven feet. Learning the hard way, we upgraded to Shimano TLD-20 and -25 reels, Penn 4/0s, and a Penn International 30. We started with 40-pound Ande but found that 50 was better. It shortened the fight and the fish were often released quicker, getting us back on station for round two. When Tom Gibson was hunting 300-pound all-tackle world record tarpon in Africa, you can bet he used big-game reels and at least 80-pound line. A local lodge there might use Mickey Mouse tackle, but not traveling world record hunters.

Rigging
The key to catching tarpon today is using wide-gap circle hooks. Don't pick the offset variety, which is slightly twisted from a true circle. For big tarpon, go with 14/0 or 16/0 circle hooks, since these fish have a mouth like a 5-gallon bucket. Gibson, who pioneered tarpon fishing with big circle hooks in the 1970s, favored a big, lightly rusted (tarnished) 16/0 circle hook that settled fully over a tarpon's lip before digging in like a can opener, as he called it. Keep in mind you have to refrain from setting a circle hook. This usually isn't a problem; the freight-train strike of a big tarpon can be so sudden, so shocking, you're more inclined to hang on for dear life rather than raring back like Saturdays TV bassin' heroes.

Keep in mind that tarpon hit so hard, they can swivel a bolted down stainless steel rod holder 90 degrees, launching your rod like a missile. In September, on our boat, we almost lost guide Curtiss Cash's favorite tarpon rod, a seven-foot spinner (with backbone) and a Shimano 4500 Baitcaster reel filled with mono backing and then 100 yards of 65-pound braid line. But I happened to be sitting beside it and slapped down a gloved hand before it could launch. We followed with the boat, but that fish finally threw the hook; it would have been a double headache with the rod lost. We'd bolted on these rod holders in order to drift-fish sideways, keeping the lines spaced well apart.

Leader
Start with 80-pound leader and work up to 200. Ande offers 50-yard spools in a variety of sizes. A long, drawn-out fight with a big tarpon may result in 80-pound leader giving way, chewed through by a tarpons huge raspy sandpaper lips. In the open Gulf, we've seen 200-pound leader frazzled and well-chewed by tarpon, but it always held unless a cruel blacktip shark was involved.

Instead of knots we use metal crimps that match the leaders diameter. Curtiss Cash ties a strong loop knot to his hooks. A snell knot works as well, on lighter leader for smaller tarpon. At the other end of the leader, forget snap swivels. Use a barrel swivel – a strong smallish black swivel of 200-pound strength or so that hopefully won't tempt the nearest Spanish mackerel (they'll eat anything shiny.)

Lures
Tarpon eat surprisingly small critters, which is why they're so readily accessible to fly fishermen. The most effective tarpon lure used by regular fishermen are the popular Coon Pops, which are really just worm jigs, though dwarfed by the big circle hook attached on top. They capitalize on the fact that tarpon eat small wiggly critters. Set out five CPs with different colors behind the boat, bump-troll slowly or cast them at a rolling tarpon school and watch what happens – Louisiana anglers (where these lures originated) have been earning multiple hookups with huge tarpon for more than 20 years. To build Coon-Pops, cut off the curve of the jig's hook with bolt cutters. Then, attach the big circle hook to the jig's hook eye, using wire or a plastic tie-wrap. We recently bought a bag of small, orange 4-inch tie-wraps that seem ideal for Coon-Popping.

Bait
Somehow, the majority of coastal fishermen, and even some tarpon anglers, haven't figured out the basics of throwing a castnet. It's almost a lost art, with marina bait easily available. Unfortunately, marinas will never offer live 8-inch mullet, because they bruise and become listless within a few hours. The tarpon angler is well-advised to learn how to spin a castnet, rounding up live bait that no marina can offer. Its easy; buy a five-foot radius castnet and practice throwing at targets in your back yard. A paper plate, perhaps. Soon enough, mind and castnet become one, and the net sails with great accuracy exactly where you want it. Even a smallish net thrown accurately will catch up to 20 sizeable mullet that most tarpon crave.

Mullet and most baitfish often remain hidden, but watch for ripples and jumps. That's when simple blind throws along shorelines, in boat harbors, oilfield canals, or even off the beach will suffice. Concentrate on throwing big circles, instead of bananas where the net doesn't open. Mullet, menhaden, croaker, ribbonfish, and sand trout are kept in the live well. Stock up; bull redfish, jacks, blacktip sharks, and even poop-rustling gafftop catfish may hammer your bait supply.

Basic Boat Tips
Tarpon schools offshore generally do not like outboard motors. Serious anglers use a strong electric trolling motor to stay mobile around moving tarpon schools, and that certainly worked for us recently. Super-serious tarpon guys use inboard motors, because the exhaust exits above water, making these boats far more stealthy, especially when slow-trolling Coon-Pops. Jetty tarpon seem more acclimated to engine noise. A roomy 22-foot boat or bigger certainly helps in choppy weather. If you fish with small kids, a cabin offers them nap space and shelter from the elements. And regardless of boat design, adding strong, extra rod holders will help present a bigger spread of baits.

When
We learned to look for Texas tarpon starting in May. Sure, President Franklin Roosevelt caught his Texas tarpon in April inside the Port Aransas jetties with the local Matthews brothers as guides, but it wasn't easy that early in the year. Keep in mind in 1937, thousands of tarpon were landed and killed annually at Aransas, so a local captain could scratch one up for a visiting president even in April. But May is better. We moved to POC on Memorial Day, and I managed to jump a tarpon that very evening while Miss Amy was unpacking boxes. (Somehow, that day, she wasn't impressed.) July delivers big schools with thousands of fish from High Island to San Luis Pass, fattening up on menhaden. August and September are considered the prime months. Tarpon migrate south in autumn, though their pace varies according to severity of cold fronts. We always ended our mid-coast tarpon crusades by Halloween, ready for other pursuits, and didn't follow them toward Padre Island.

Where
Tarpon roam the entire coast and prowl the jetties, though only once in a thousand trips did we see and hook one at the Sabine jetties. Big tarpon at the Galveston jetties are also uncommon; they're usually on the horizon, however, or 10 miles beyond it.

In November, Padre Island is your best bet this late in the season, and the farther south the better. At South Padre, you can launch close with even a sturdy jonboat and fish inside the jetties, walk the rocks, or drift at the end where a former Texas state record was caught in 1972 around a big school of rain minnows. If new to the game or that area, try booking a half-day trip with a tarpon guide. Early November and calm weather can bring in clear, green water along Padre Island, and I've seen remarkable action around the Mansfield jetties during this time.

As for the upper coast, in mid-November we did hook a monster tarpon while anchored and bottom-fishing in 50 feet within sight of the Galveston seawall. That fish weighed at least 180 pounds and spooled a TLD-15 reel. While desperately tying the end of the line to another reel, (there wasn't time to hoist anchor), that tarpon jumped far away and new 40-pound line cut into Bill Wilsons fingers before parting... Pow! He fell back with a scream, and I wrapped his hand with a fish towel.

Catch a big tarpon, and you'll be a fan forever. But do the tarpon population a favor; don't drag them into the boat for a hero picture. Take a photo when he's alongside the boat, twist that circle hook out, and let him go. For taxidermy, measure the length and girth while in the water, release it, and order a fiberglass mount that will last decades. Much better than a skin mount whose oil content later turns rancid, turning the entire fish an oily brown color.