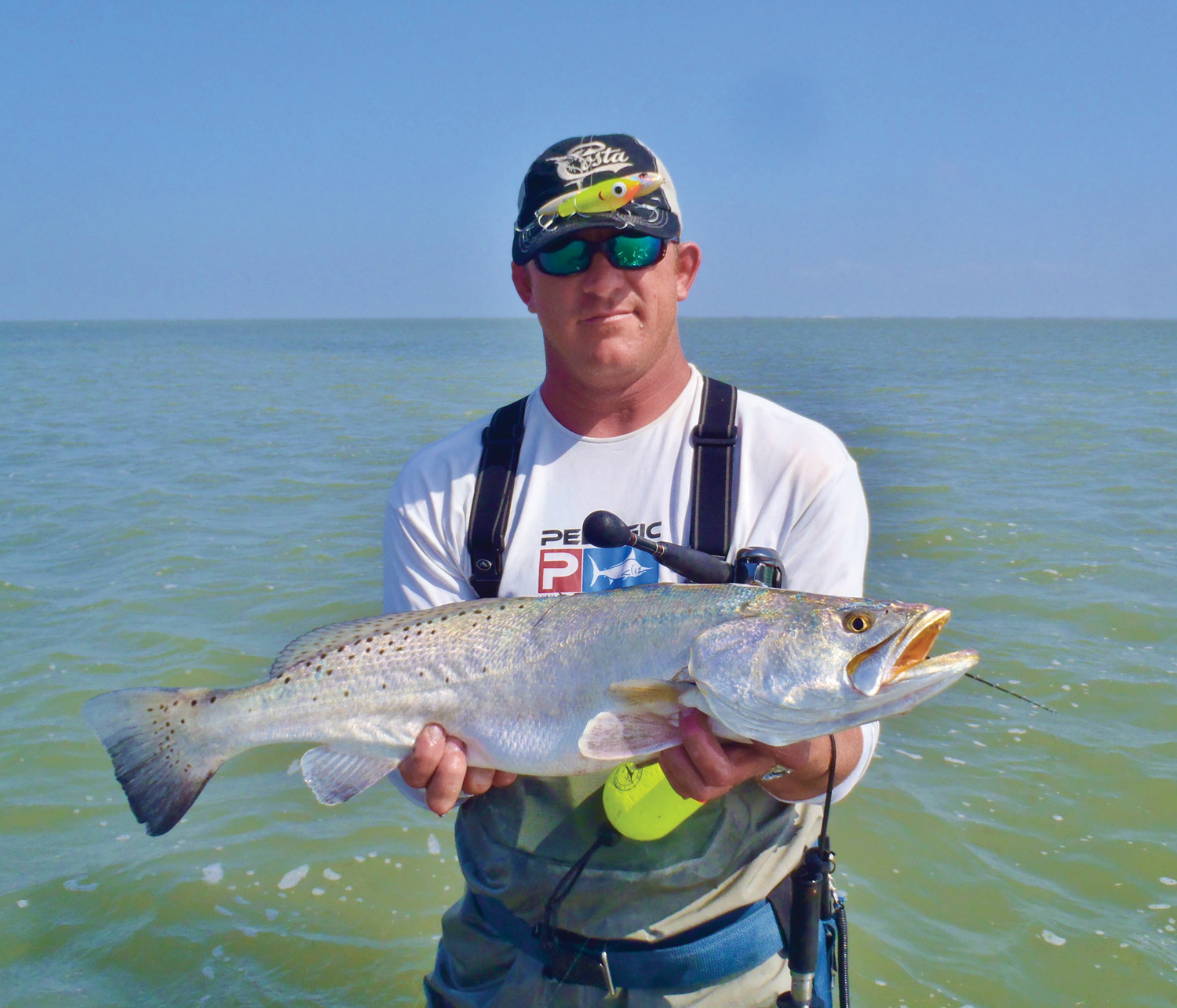 Using a soft plastic in the middle of the day under a bright sun, Randy Slocum made a good day great when he caught this handsome specimen.

On some occasions, differences in various attributes of lures of the same type can cause one to earn significantly more strikes than others. Determining the disparity in number of bites results from some aspect of the physical traits of the lure rather than from presentation style can prove difficult, but in my experience, one specific lure within the same group sometimes just works better than the rest.

I recently observed the phenomenon while fishing with a repeat customer and his wife. We jumped out of the boat in pre-dawn darkness, all with topwaters dangling from the ends of our lines. Significantly, each of us deployed a different plug. Shortly into the wade, my male customer caught and landed a decent trout, weighing more than four pounds. He also earned several noisy blow ups on his One Knocker Spook, missing the other fish.

I and the wife had no takers, though we threw lures similar in size to his. When he caught a second trout, I began to ask for specifics about his presentation. “I'm walking the dog real slow and deliberate, making a steady, wide, side to side movement. Pausing every now and then too, but the strikes are coming while the lure is moving.”

His wife and I noted the details of his description and began trying to imitate the style with our lures, a She Dog and a Skitter Walk. We both had a couple weak blow ups in the next few minutes, but the husband caught another trout, which tackled his plug viciously. Since he had a second One Knocker in his box, he tied it on his wife's line.

All the while, I did not really want to acknowledge the possibility that one type of topwater could produce such a different outcome, even with a similar presentation style, so I kept working to tweak the movement pattern with my Skitter Walk. I also tried deploying the same presentation with a full-sized Super Spook, without success.

Soon, however, the wife began getting regular blow ups. She wound up landing a twenty-five-inch specimen, next a twenty-three, then a twenty-eight incher which weighed seven pounds.She upgraded her personal-best mark twice during the flurry, and caught a few other solid trout too, missing several more, when they sprayed foam into the sky while trying to inhale her floating plug.

The two One Knockers used by the couple that day did not bear identical coloration. Obviously, they shared the same size profile and produced similar rattling sounds and vibrations. I believe those factors accounted for why the plugs produced so much better than my normally effective Skitter Walk and Super Spook. Surely, I've seen Skitter Walks earn many strikes while other floating plugs wouldn't, and I've witnessed how effectively a Super Spook Junior can make fish rise and strike when other topwaters don't work at all.

Consequently, I don't see the One Knocker as a Magic Bullet, one which will always perform better than similar plugs like it did on the day described. For some reason or list of reasons, the plug did have the “right” attributes on that occasion, but one should not expect the same results in other places at other times. Identifying which specific lure within a given family will perform best isn't always easy, to say the least.Knowing this, I believe groups of two or more anglers could benefit from deploying a detailed plan of action during a day of fishing, to determine which lure of a chosen type best fits the needs of the moment.

Such a course of action would work best when implemented after careful forethought, collaboration and planning. For one thing, all anglers participating in the strategy would need to carry an identical or nearly identical set of lures along while wading, or aboard the boat, if fishing from the floating platform. Participants would also need to agree on which group of lures would likely work best at the start of the day, and which to try next if the original assumption does not produce as many bites as expected.

I work with well-developed ideas in mind about which lures to try first and which to use as backups, taking the season, time of day and other factors into account. Anglers attempting to use this plan would need to do the same. Describing how the basic choices vary from season to season helps clarify what I mean.

In summer, when starting a day of fishing in the morning, with typically light wind, I assume the trout will take topwaters readily. If floating plugs don't produce many strikes within a reasonable time-frame, I'll likely switch straight over to soft plastics, but might try slow-sinking twitch baits as a second choice, if signs indicating the presence of actively feeding fish abound around me. In order to make the collaborative plan I envision work; two or three anglers would need to work from the same assumptions.

Before beginning to cast, each would select a different type of topwater to deploy, ideally ones with significantly diverse size and noise-making attributes. For instance, one might choose a Super Spook Junior, while a second ties on a She Dog, the third a Skitter Walk. All of them would also leave the boat carrying the same lures used by the others, and would remain ready to change to the one which produces best, if such a scenario develops. If and when the anglers perceive the superior efficacy of one plug, focus should certainly shift to presentation.

In fact, anglers working this plan should stay focused on presentation style as a component throughout the process, ideally to eliminate it as the reason for variation in bite frequency.Certainly, once all members of the group switch to the same plug, they should attempt to identify the most productive presentation. This truth rings in other seasons, when lure selection strategies don't mirror the summer plan.

In the moderate seasons, meaning spring and fall, I find slow-sinking twitch baits more useful than ever. So, I often start each day off using one of them, switching “up” to topwaters when the bite seems ridiculously easy and I see ample signs of surface-feeding activity, and “down” to soft plastics when things look and feel stale around me, and bites don't come frequently.Collaborating anglers working within the framework of the plan described here might embark on a fall or spring day's journey with one using a sinking Paul Brown Fat Boy, a second throwing a Catch 5 and a third, if involved, tossing a Maniac Mullet.

Of course, the other aspects of the plan don't change—each angler should also carry the lures the other(s) use and remain ready to change if one shows superiority, and presentation style must remain a recognized component for imitation. These parts of the plan won't change regardless of the season or specific situation, like one in winter, when lure-choice plans evolve into a third design.

In cold water, starting the day off with a soft plastic makes more sense than any other strategy, assuming a somewhat negative feeding attitude among the fish, and also that a low and slow approach will earn more strikes than any other basic method.Ample signs of life at or near the surface will encourage a shift “up” to slow-sinking twitch baits or even topwaters, if bites on soft plastics come easily. Anglers attempting to quickly identify which offering within the wide-ranging group of soft plastics will optimize results could choose to alter one or more aspects of their choices, depending on the nature of the situation.

Two wading anglers might simply use a rat-tailed lure and a paddletail, for instance. With a third participant in play, a smaller or larger version of one or the other might be added to the menu. Or, the three might take a different path entirely, each tying on the same soft plastic, with one placing it on a sixteenth-ounce jighead, while the second places it on an eighth-ounce head, and the third uses a three-sixteenths. Further, one might use a paddletail on the lightest jighead, while one throws a rat-tail on the mid-sized one and the third dangles either type of worm on the heaviest head under a popping cork.

Since the soft plastic family of lures includes so many offerings, the possibilities for building a plan of this kind also vary widely. The keys to using the specific plan described here involve each participant deploying a lure within the same family, but having some measurably different attributes, and the ability of all anglers to agree on the basic strategies related to lure choices and working to make specific changes in response to data gathered about strike frequency.

If just two people enter into an agreement to fish within this framework of ideas, the pair should make an effort to select and use lures with widely different attributes to increase the likelihood of gleaning meaningful lessons quickly. In the topwater group, for instance, picking a Spook Junior and a She Dog would make sense, while in the soft plastics realm, deploying a rat-tail and a paddletail to test their radically different aspects should provide poignant results.

This course of action resembles others more commonly used by coastal lure-chunkers, many of whom consciously select lures within different families to start the day, one throwing a topwater, the second a twitch bait and a third a soft plastic. But the plan I propose here assumes all involved can agree on which family of lures should hold the optimal offering for the moment, and that systematic experimentation might help identify it.

Some readers will likely note I have not mentioned color as a significant component in this process. I don't believe color carries the same level of importance as other parts of the equation; the type, size and noise-making attributes of a lure along with presentation style almost always affect productivity more than color, in my experience.

Folks who choose to focus more on color could certainly add the component into the choices made while working this ham and egg plan, one tossing a dark rat-tail while the other tries a light paddletail, for instance. Adding in the element of color might enhance results, but simply choosing the exact same lure and altering the color within the group denies the truth of the foundational concept of this strategy.