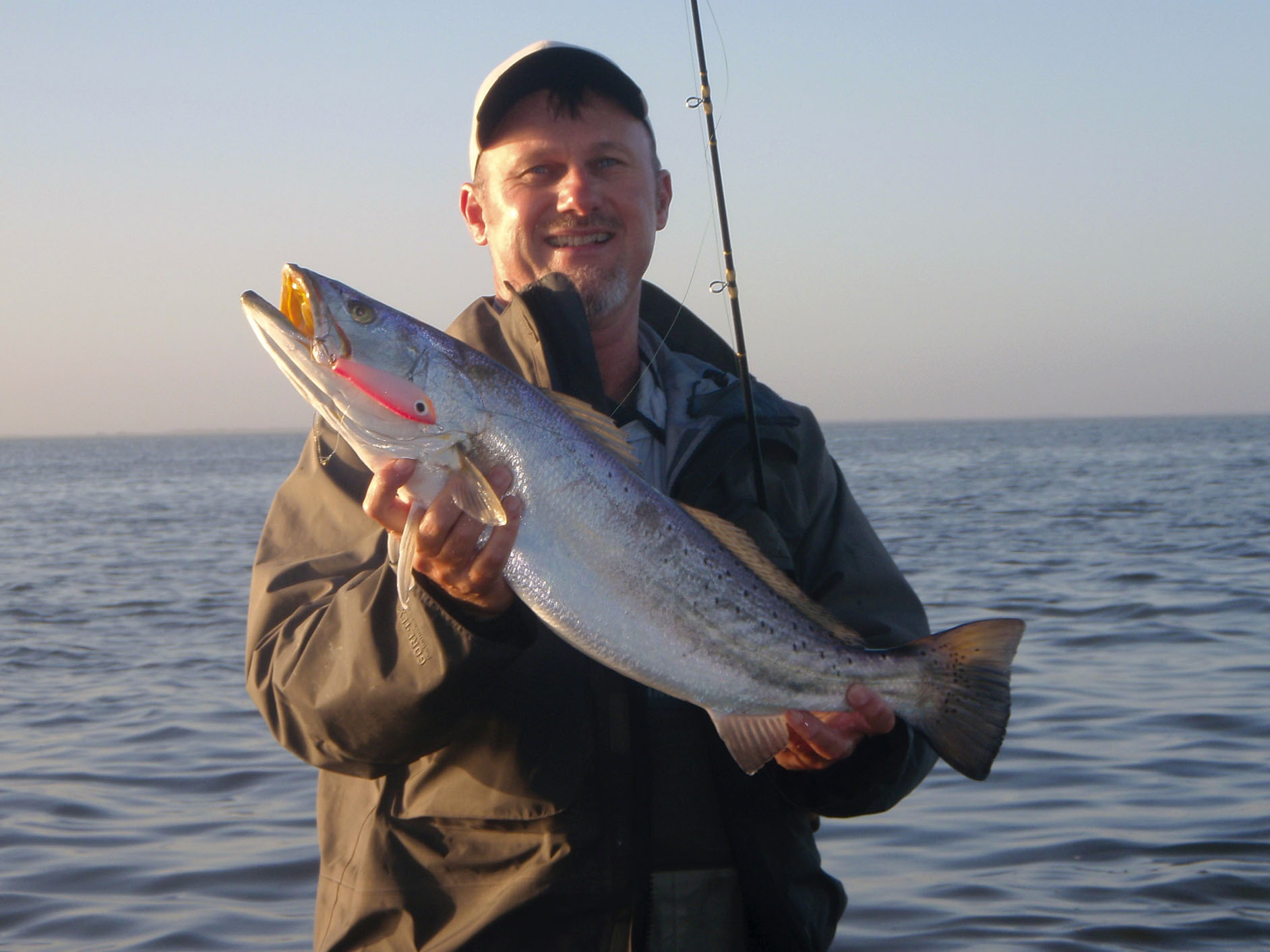 The strike of this 9 pound trout was a nearly imperceptible tap which gave no evidence of her considerable size.

A recent run of tough, yet ironically productive fishing caused me to analyze and fully develop a theory related to the choice of whether to switch lures frequently or stick with one over a long haul. The anecdotal evidence below exemplifies the type of outings we had during this month-long run.

On Saturday, February 20, I and four clients managed maybe fifteen bites, and caught only about ten trout, but four of the fish measured more than twenty five inches, and one flexed the Boga Grip to nine pounds. Two days earlier, I and four different clients coaxed only about twenty bites, and caught fourteen fish. Eight of those fish weighed over seven pounds, the biggest measuring thirty inches and nearly nine pounds. Similarly, on the 26th day of the same month, I fished with two others and we struggled to get ten bites, but one of my fish weighed ten pounds and a client caught a personal-best seven-plus pounder.

Looked at another way, during those three days of fishing, I personally had less than twenty bites, but I caught six trout between seven and ten pounds. For the entire month, in eighteen days of fishing, I and my clients landed twenty nine trout exceeding seven pounds, including four in the nine pound class and one true ten. The total number of fish we caught was low, averaging no more than ten per trip. Approximately one third of our trout were over twenty five inches, and about half of those weighed over seven pounds.

The significance of all this for me is that all but two of the big fish we caught bit a sinking Corky, either the original or the Fat Boy. We stubbornly stuck to Corkys during those days because of a counterintuitive theory I've developed with regard to changing plugs as an experimental strategy during a slow bite.

The kind of slow bite referred to here is one that results from two contributing factors: one, a relatively small number of fish lying within reach of the angler and two, a generally finicky feeding mood in those fish, caused by cold water and/or other environmental conditions. This type of bite is often experienced from late-fall through early spring when trophy trout fishing.

Basically, I conclude that changing lures frequently during a super slow bite of this kind is a bad idea. Most of the casts made during the above-referenced outings resulted in nothing. But eventually, the plugs we were throwing were eagerly and aggressively attacked, frequently by trout over twenty eight inches. From this, I deduce that we were throwing at scattered singles and small pods of big fish.

Catching those fish can require making an attractive presentation fairly close in front of their noses. Since we couldn't actually see the fish at any time, due to murky water and/or a glare on the surface, placing the lure in close proximity of the trout required making lots of casts and moving at a snail's pace through the area, changing the exact location and direction of cast constantly.

Some people, in the same situation, change plugs regularly, in search of something that will get bites more easily. Though I did a limited amount of experimenting with other lures during that time frame, mostly, I just kept a sinking Corky tied on, a dark one if it was cloudy, a brighter one if it was sunny. My customers largely did the same, based on my advice. I will certainly admit that other people might have caught the same fish we caught (or more) on other lures, but I stand by my strategy of sticking with what I knew would work for me.

My thinking is that it's too hard to get pertinent information to justify making changes in such a scenario. In a situation where it's so hard to get a bite on something that is known to eventually work, it's impossible to determine what it means when another plug is tied on and cast some number of times without the desired result. After all, we'd sometimes make a hundred or more empty casts with the Corky, then suddenly get a vicious strike and catch a fish.

In contrast, it can make more sense to switch lures when it's easier to get a bite. If the action is steady on a given plug, meaning it's eliciting strikes regularly, say once in every four or five casts, a change might actually help one identify some optimal offering that will produce a strike on nearly every cast. If the second plug doesn't speed up the action, it can be reasonably assumed to be inferior to the first one. Conversely, it might turn out to be even more effective.

Making changes also makes sense in a slow bite that is unexpected, meaning it occurs in mild or hot weather in the presence of indicators of plenty of fish. I'll readily experiment with lure choice if I experience a slow bite when fishing in spring or summer, when I expect to catch numbers of fish fairly easily, particularly if I've been doing so on recent outings. If a few lure changes don't increase the frequency of bites I'm getting, I'll move to a new location, assuming that there aren't many fish where I first stopped. But in peak trophy season, when I expect to fish for long stretches in the right places for a few bites, I'll plant my feet and keep casting without making many changes in what I'm offering.

The problem with my theory that it makes more sense to change lures when it's easier to get a bite and not at all when it's tough comes in picking the right lure to use when bites are few and far between. For me, doing so comes easiest when I'm fishing frequently. If I've fished eighteen of twenty days and caught quality fish on a particular plug numerous times recently, I can tie it on with confidence and grind away, knowing it should eventually work.

Those who don't have the luxury of fishing as often as a guide will have to do a little more experimentation, but they'd be best advised to start with a plan based on the season and weather conditions and make changes systematically and methodically. The factors which lead me to choose a soft plastic over a Corky, a small topwater over a large one, or a floating Corky over a sinker are too numerous to be outlined here, but working within a set of sound principles when picking lures is a must if consistent catching is the goal.

Simply running through everything in the box randomly and without thoughtful purpose will rarely result in catching much of anything, especially on days when it's nearly impossible to get a bite even on the optimal lure for the moment. Often, a small number of fish in the area and a marginal feeding mood contribute to the difficulty of coaxing strikes from trophy trout. Consistently catching scattered, finicky, large trout on plastic plugs requires locating general areas and sweet spots which are holding such fish; it also normally necessitates concentration, persistence, and supreme confidence in the right plug.