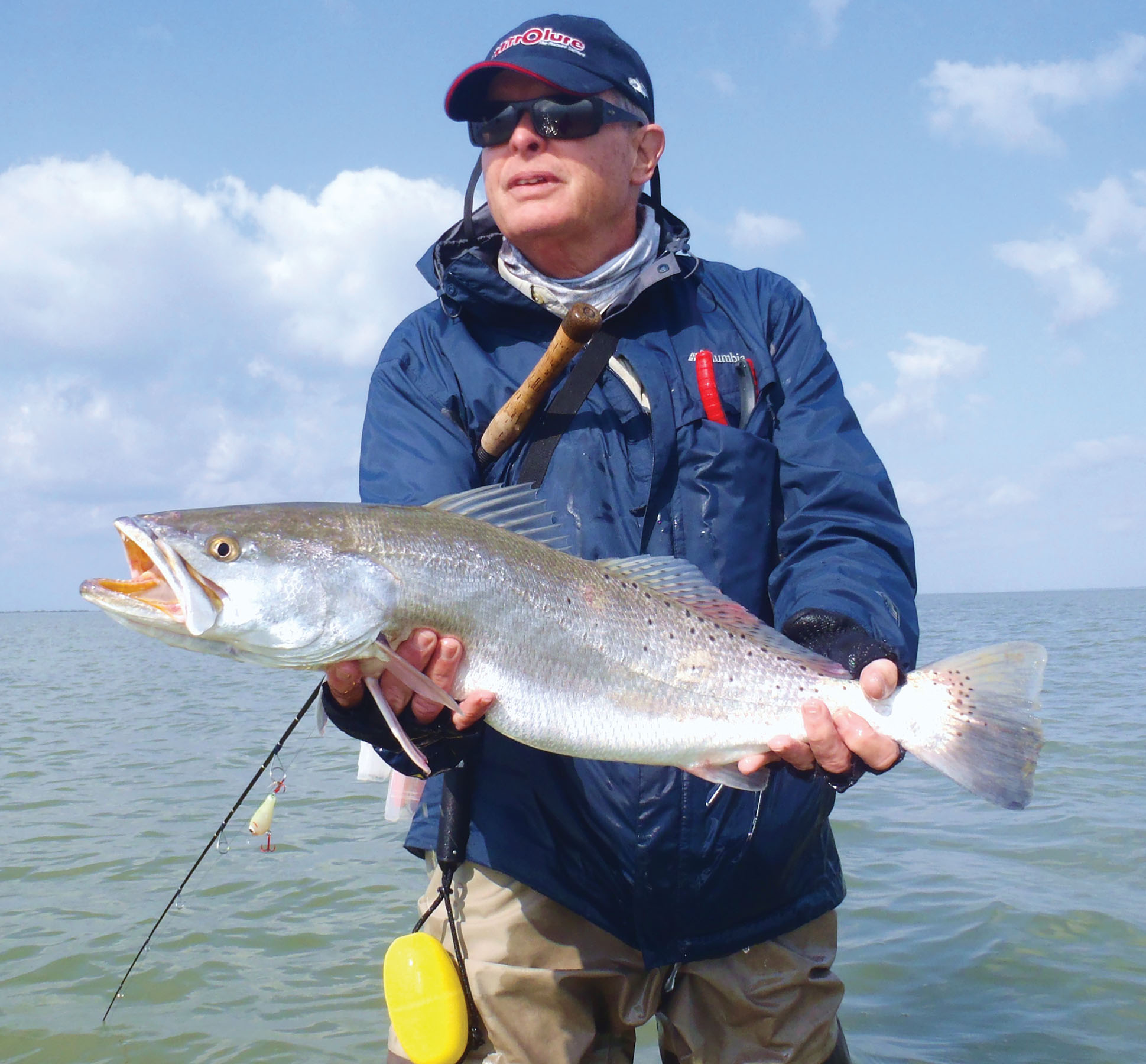 In early May, I had the opportunity to spend four days on the water with a trophy trout enthusiast from Virginia. Sheldon Arey and I caught and released probably 300 trout that week, about one quarter of which measured over twenty inches. We didn't catch a monster, though we did take pictures of several impressive specimens, measuring up to 29 inches and weighing nearly eight pounds.

We caught our fish shallow on a variety of lures. On the first day, under the influence of a passing front, MirrOlure Provoker soft plastics on sixteenth ounce heads accounted for almost all the fish. While steady northeast winds continued to blow the second day, we caught trout on Provokers, sinking Fat Boys and topwaters too. The topwater bite improved even more the third and fourth days.

My studious client caught on quickly to wading and fishing waters less than waist-deep, things he doesn't do much back east. Effectively wielding one of my Laguna spinning rods, he caught plenty of specks and big ones too.

Sheldon came to Texas after purchasing and studying my books and DVDs and applying some of what he learned to his fishing back home. Over the last year or so, he'd sent me several emails to let me know the techniques I describe and recommend were working for him. The pictures he attached to the messages documented some real monster trout, including one over twelve pounds! A partner of his caught the giant off his boat last winter, on a day when the air temperature stayed below freezing, the water temperature below 40.

While we fished and talked during his visit, the retired Naval officer described in detail how he and his partners use Paul Brown's Original Lures to catch big spotted seatrout, mostly in fall and winter. Later, he was kind enough to send me a written description of their techniques, some of which I've quoted below. What these guys do with Fat Boys in deep water is impressive, and completely different from anything I've heard of or seen here in the Lone Star State.

Applying aspects of their methods might be a way to catch more jumbo trout locally. The strategies Mr. Arey describes are used by him and a select few others in southeastern Virginia to target trout, primarily in tidal rivers adjacent to plants discharging warm water. "These rivers generally have a four to five foot tidal range and a two to three knot current runs at times." They "are deep, with flats falling off into staircase shelves that usually start at eight feet, then drop to 15 feet, then 25 to 35 feet or more."

"The water in the rivers tends to be in the upper 30s to low 50s temperature range from late December through early March, which makes our trout lethargic. When the water cools to around 50we start looking for specks along the staircase shelves and other spots."

When targeting fish on ledges, "we look for shelves with a moderate current and start where the water drops to eight or ten feet. If the current is not too strong, one of us will cast across the current up onto the flats.The other angler will stand on the bow and cast the lure as far up-current as possible and work the lure slowly back. When the water drops into the lower 40s, the fish are often in deeper water and we try deeper shelves in the twelve to fifteen-foot depths."

"Our rivers tend to have a few barrow and barge pits off the main rivers where trout congregate. These pits are usually twelve to twenty feet deep and have little current in them. We apply our methods in these locations until the water temperature [drops to] around 40 degrees."

Among the most enlightening aspects of these Northeast-Coast anglers' methods are the presentation styles they prefer with their Fat Boys. They deploy what Sheldon describes as "low and slow" techniques, having developed them because they "did not know [they] weren't supposed to use a Corky in deep water."

One favored retrieve involves making "a long cast with a sinking Corky and letting it sink to the bottom [on] slack line." Sheldon states he will count "to twenty in most locations for ten to fifteen feet of water using the 1001, 1002 counting method [and] will then pick up slack and start a retrieve." He will then point the "rod tip at the water and make four rapid sweeps with the rod while reeling in slack to make the Corky walk the dog in sharp jerks."

Then he will "let the Corky fall back to the bottom using a count of at least ten" even more in deeper and/or colder water. Most strikes occur "as the Corky is slowly sinking back down toward the bottom." He will then make four downward sweeps and another pause, repeating "the process all the way back to the boat, [and that] some fish follow to the boat and can strike on subsequent pauses all the way up to the surface." Significantly, he asserts, "when the water is very cold, it may be necessary for the lure to touch the bottom before the trout will strike it."

A second described presentation involves making "a long cast and letting the lure sink all the way to the bottom before starting the retrieve for maximum effectiveness." Once the line is tightened "after the cast, this retrieve calls for two short and light twitches with the rod tip again pointing toward the water followed by a slow retrieve to pick up the slack" while the lure is sinking.

The angler is basically retrieving line "at a slow, steady rate all the way back to the boat with two twitches after each pause." He warns that the lure must be watched "carefully, as it is easy to operate the retrieve too rapidly, which will make the lure ride too high in the water column." Sheldon also cautions anyone targeting winter specks in deep water with these lures and techniques to watch the line at all times when the plug is sinking, as fish often pick them up lightly and begin swimming off with them.

Sluggish fish in cold water often bite subtly, so any light tap or even a slight change in the feel of the lure should be assumed to be a fish. Maintaining contact with the lure is critical to feeling light bites, as is the use of braided lines, which facilitate better strike detection and sink faster than monofilament.

Several aspects of the methods used and described by the angler from the Old Dominion State seem to offer potential to anglers here in coastal Texas. Obviously, some might employ the countdown, low and slow retrieves to target fish in deep canals and basins in winter. Others might attempt to apply these strategies in the warmest weather, when many trout seek cooler temperatures associated with deep water along ship channel spoil banks and around structures standing in deep, open-bay areas.

Experimenting with countdown times and retrieve speeds to maintain close contact with the bottom would be critical to making these techniques productive. A low and slow technique will only work if the lures are moving with the current rather than against it, especially if the current is moderate to strong.

Some might suggest placing weights on the Fat Boys to allow them to be worked faster in relatively deep water. Sheldon and I disagree with such a practice, since adding weights to Corkys changes the rate and manner in which they fall through the water on slack line. This change is not a positive one, nor is it an acceptable consequence.

I won't likely employ these techniques very often, given my preference for wading and fishing shallow water, but Texas anglers who prefer fishing from an anchored boat could definitely benefit from trying the deep-water methods described by the Virginia anglers.

As Sheldon and his buddies have clearly shown, speckled trout in one state behave similarly to those in another, even one that's more than a thousand miles away. Lures known to catch fish in one place will likely work in others, especially if the folks using those lures are open-minded and deploy them with intelligence and creativity in the proper locations.