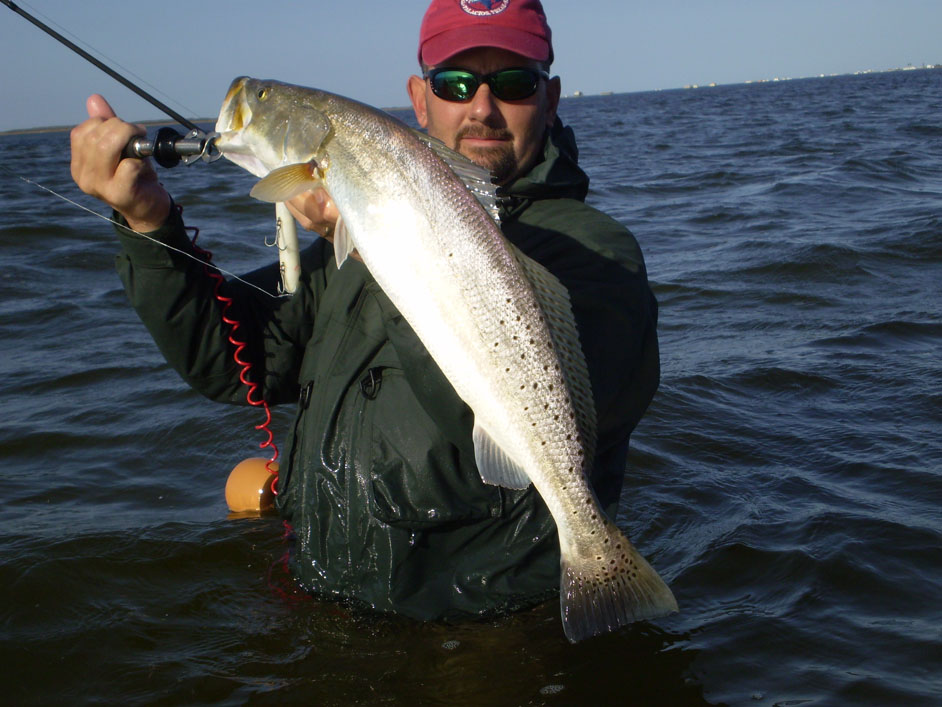 Back in the early 1990s, I was living in a canal home off Highland Bayou, next to Jones Lake.  My love for saltwater fishing was not new to me then, but my desire to catch trophy trout on artificial lures was in its fledgling stages.  Situated as I was on the shores of West Galveston Bay, I was in a place where I could satisfy my newly found urges.

Though it's not the best place in the state to catch a giant trout, West Bay is home to impressive numbers of specks.   One of the optimal seasons to contact these fish, I'd read, is the second half of winter.   Drifters focusing on muddy streaks of water over scattered shell in deep parts of the open bay near Green's and Mecom's cuts catch plenty of trout.  Soft plastics and Mirrolures are the plugs of choice for anglers hoping to pluck limits of keepers out of the streaks.

But for those who place a priority on catching a trout over about four pounds, such tactics are not necessarily the best way to go about getting a fix. If the tide is really low or the water really cold, all of the fish, including the biggest ones, will likely be out in the middle, and on those days, the chances of finding more than an occasional whopper are not particularly good.

When the weather warms up for three or more days between fronts, especially if southeast winds fill up the shallow coves on the south shoreline of this long, narrow bay, the story is much different. Warm February afternoons, the experts claimed, offer optimal opportunity for making big trout take a swipe at a plastic plug.  As the warm waters flood into the numerous pockets and enclaves fronting the marshes of Galveston Island, some trophy trout will follow schools of mullet in there, appearing in predictably muddy and quiet corners of the coves, bringing their appetites with them.

As I said, back then I knew all this from reading the accounts of others who told of finding the big sows in just such places, but I'd never really experienced it for myself. One year, I was more determined than ever to be in the right place at the right time and find out exactly what all the fuss was about. I'd caught thousands of smaller trout and a few big ones (mostly by accident), but I was determined to target, locate and catch some whoppers while wading and chunking large plugs.

And as the proper weather window approached, I played hooky from school and talked my neighbor into accompanying me on what I assured him would be a memorable foray. "It's all coming together tomorrow," I said. "We've got a new moon and the weather's been warming for two days already, with another warm day predicted tomorrow. Not only that, but the tide is already back up since the last front and the southeast wind is supposed to crank tomorrow afternoon while the tide rolls in."

"We'll drift the mud streaks in the morning and catch some trout to eat, then when it's good and warm and the tide starts to come in, we'll find us a cove with a lot of bait and wade in there and whack a few big trout," I said with confidence. "You watch, I'm going to catch the trout of my life tomorrow! And I'm going to catch it on a topwater lure!"

Richard Madden, my neighbor, had been fishing the coast for many years and had caught more trout than I, but he seemed buoyed by the swagger in my voice as I told him what I'd do. He smiled and agreed to go along for the ride. We didn't leave the house at the crack of dawn the next day; we slept in and eased our way into the outing, and found ourselves searching for mud streaks well after the sun came up.

The first few drifts we made close to Green's Cut were unproductive, but I was unfazed. "Oh well," I mused, "I guess we'll have to find 'em a little farther west. The coves I want to look at are over there anyway."

We crossed over Carancahua reef and found another muddy spot out in the middle of the bay. Probing the bottom with soft plastics, short hopping them off scattered oysters lying on the mud, we began to get strikes with some regularity and caught, played and kept some nice eating-sized trout.

"Just like you said we would," Richard grinned as he popped his jighead loose from the lip of a seventeen incher and plopped it on ice in the cooler beside a handful of others. He turned to make another cast into the clearly visible color change from which we were catching our fish, but I had other plans.

"Yes, and what else did I say?  It's almost two o'clock now and I'm going to go over there on that shoreline and put my hand on a big old fish. There's no time like the present to catch a trophy," I told him. I could tell, however, that he was somewhat skeptical of the fact that I could execute the more difficult part of the day's plan. He wanted to continue drifting and working on his limit.

But I hadn't taken a day off and gone all the way out there to catch a school trout. I was bound and determined that the trip would play out exactly as I'd said it would, so I cranked up the old 88 Johnson and motored toward a marshy point that sticks out into the bay in front of a large cove.

Idling across the shallow bar at the mouth of the little bay, I could see that the cove was split in the back by a sandy point dissected by an old fence. I could also see many mullet jumping around in all corners of the protected pocket, which had filled nicely with the incoming tide and the help of the onshore wind.

"Look at all this bait!" I said with a smile. "Wonder why they're so nervous and jumpy?" I laughed then, not really sure that I was seeing what I wanted to be seeing, but certain that I wouldn't let Richard know that I had even the slightest doubt in my mind as to what was about to happen.

"I'm going to pull up by that point and walk into that back corner over there," I told him. "I bet you it's muddy and it looks like it might be just the right depth for an old sow trout. All the articles say to fish in crotch deep water or less if you want to meet a monster."

He seemed unconvinced and unmotivated, saying he would wait and watch me before walking all the way into that secluded corner on a whim. "Whatever you say," I warned him, "but when you see me waving, you might want to head over that way!"

I studied the shallows as I walked over the sandy pasture into the far corner of the little pocket and could see a subtle dropoff running adjacent to the shore. A gut ran down the middle of the cove within a cove and played out at the mouth of the marsh proper. Stealthily, I slid into the water in the southeastern tip of my chosen corner of paradise and began to inch my way forward.

Repeatedly, I cast across the flat, placing my Super Spook within a few feet of emergent grass on the other shoreline and working it back toward the middle where the gut cut a slightly deeper path through soft mud. Alternately, I cast straight down the bank on my side of the pocket, walking the dog down the edge of the gut.

I'd made at least thirty casts among the leaping mullet and mud boils and had just started to actually question whether the whole plan would work when in an instant, my life was once and forever altered. Out of the corner of my eye, I glimpsed a frothy eruption of white salty foam in the vicinity of my steadily moving plug and then came the powerful pull of a fast and heavy fish.

At first, I was sure I had a redfish on, given how hard the fish was pulling and the fact that she didn't come out dancing with her head shaking in disgust at the turn of events unfolding under the sun on a warm winter afternoon. But as I pulled the fish closer, I could see her regal, silver silhouette just under the surface of the trout-green shallows, and I let out a shriek of delight that seemed to mute the noisy onshore wind. I swear that old fish looked more like a king mackerel than a trout to me; I'd never witnessed a prize like that in skinny water at such close range.

I coaxed her over and reached out to grab her, but she wasn't done putting up a fight, to say the least. On a short line and against more drag pressure than I would ever apply now, she shook and flopped around violently near my knees, splashing water in my face and sending a surge of adrenaline through my core. Eventually, she rolled on her side and I managed to get my hand around her fat, dappled shoulder, marveling at how pleasantly she stretched and filled the palm of my hand and at the majesty of the colors mixing in reflection on her back and sides.

I raised my captive triumphantly to show my neighbor who sat watching from what seemed a half a world away. He gave me the thumbs up, but did not immediately climb over the gunwale to join me in my private corner of the bay.

I will report the facts as they were; I strung and killed my first twenty eight inch trout that day. The desire to show her off to family and friends overwhelmed any thought I might have had of releasing her to live again. I also caught another beauty of about twenty six inches after convincing Richard to walk over and join me. We chuckled and shared a high five over that second fish, which ate my Super Spook within a few feet of where the first one had.  Rich seemed confused when I bent over to release her.

"You're going to let it go?" he asked, and I looked up smiling, nodding in affirmation.

"Should have let the first one go too," I said. "It makes me kind of sad to see how her color's all faded now that she's dead."

More than any other fishing experience I've ever had, that day clarified what I love most and sent me on a long journey that has not yet reached an end. The first of many memorable February encounters I've had with trophy trout, that outing fueled my desire to dance with the big girls like none before or since.

I learned that it's possible to combine confidence with fishing intelligence and make a dream come true. I also realized that the best of these dreams ends after I've had my way with the right rare fish and held her loosely in my hand, but not in a death grip. I began then to appreciate the sweet relief of catch and release.