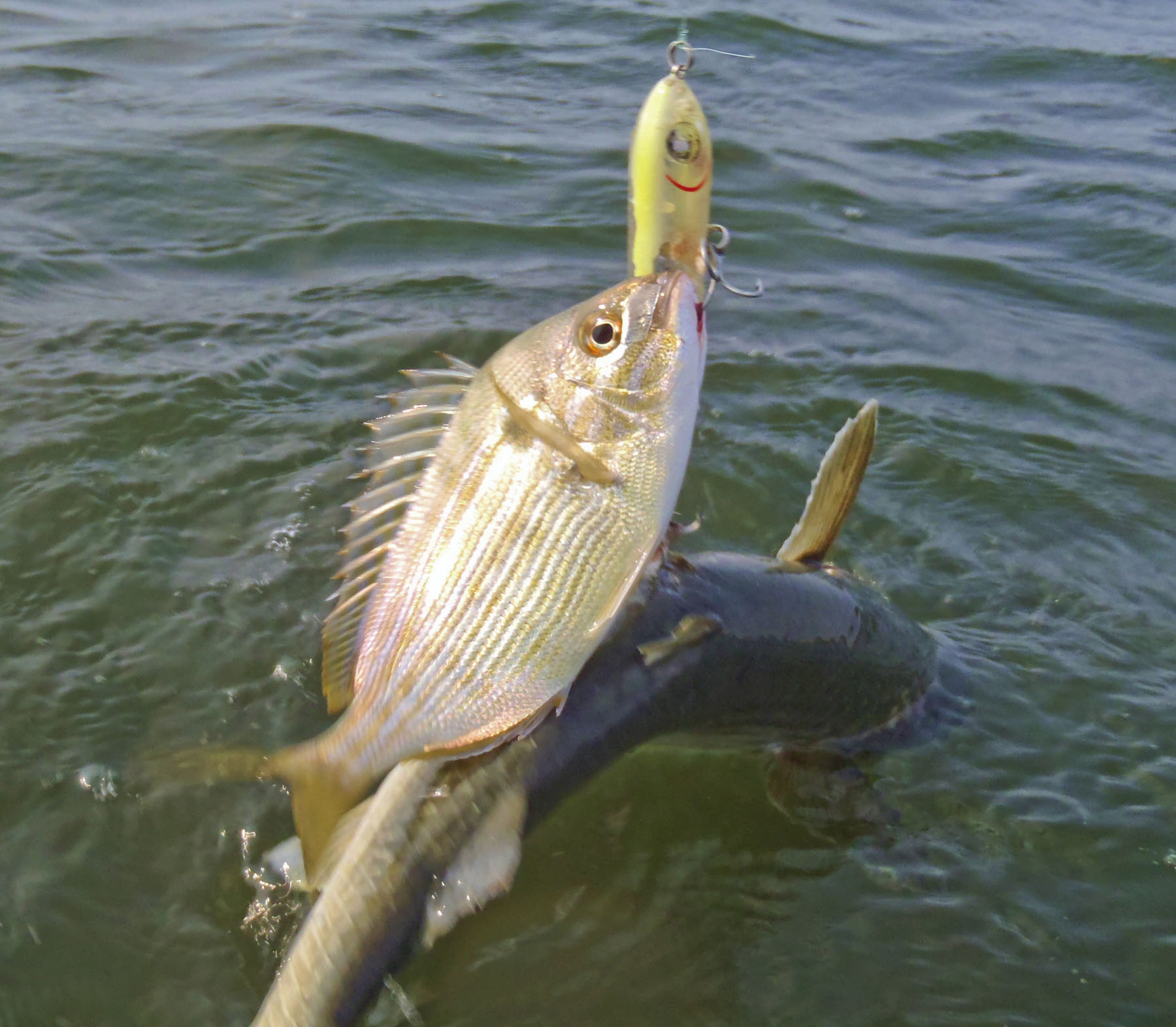 Along with the summer heat comes a profusion of bait fish and other creatures on which the trout can feed. Catching them on lures can consequently become more challenging.
In last month's feature, I created a fictitious tale, using two characters to illustrate a perceived clash of cultures existing between younger and older anglers. I exaggerated some aspects of the pair to emphasize their differences. Below, I've attempted to do something similar, but this time I've presented the fishermen as I really know them, rather than as caricatures or archetypes.

The men in question both know how to catch fish, and both have won trophies and prize money in competitive events. They fish together regularly, though their priorities and stylistic preferences differ. My perception of them leads me to an important and profound conclusion.

Angler A largely does things the way I do. For instance, he keeps track of current trends in the sport, and adjusts his equipment accordingly. His custom-made, featherlight rod and similarly light reel reduce fatigue in his wrists and arms during the long hours of chunking and winding.

On the reel, Angler A places 20 or 30-pound braided main line, but he places a length of clear line between the super-sensitive braid and his plugs. He uses a variety of lures, including ones deployed by other experts, in all three main families, topwaters, sinking twitch baits and soft plastics. Occasionally, he pulls out "specialty items" within those families, like broken-backed crank baits. Additionally, he shows creativity when rigging his soft plastics, placing them on shank-weighted heads when the need arises, due to profuse amounts of shell or grass on the bottom.

In other words, Angler A strives to be versatile and to make use of as many modern tools as he can in a quest for consistency. He wears lightweight, breathable, Gore-Tex waders and high-tech sunglasses which allow his eyesight to penetrate the waves effectively. Furthermore, when not out on the water, he spends plenty of time studying Google Earth images of the bays in which he likes to fish, cross-referencing what he sees with information found on maps, GPS screens and also with his recollection of details learned during his visits to those places.

This studious angler recognizes the important relationship between intimate knowledge of the bottom features in the bays and the ability to identify sweet spots. In other words, he recognizes the connection between knowledge of the bays and the ability to consistently find fish in them. An inherent curiosity spurs his quest to catch big trout in various places.

Not afraid to make long drives to visit and fish in new areas, he finds those kinds of adventures intriguing, and frequents many locations south of the JFK Causeway which hold more trout exceeding thirty inches than any place further north. Motivated to catch more magnum fish, he spends ample time, energy and money trying to upgrade his personal best.

In short, Angler A's artful and effective angling efforts reveal his high fishing acumen. An "elite-class" angler, he could teach others many things about the sport, if he wanted to. Mostly, he stays to himself, fishing long hours alone in the dark and fog, on secluded shorelines, trying to escape the workaday life which pays his way. In this respect, he closely resembles his friend, Angler B. But Anglers A and B differ in many significant ways.

Angler B still fishes with the heavy green Curado reels he won in tournaments years ago. On them, he spools monofilament main line, tying it directly to his lures without adding a short piece of stronger line to serve as a shock leader. Leaders, he says, hamper his presentations.

He finds little use for fancy new equipment of any sort, sticking with inexpensive, generic sunglasses, waders, boots and other stuff. All his gear is functional, though some of it fails to provide comfort and facilitate ease of activity like some of the more costly gear available today.

More importantly, Angler B mostly likes to fish in one small area within one bay system. He does so almost every time he puts the boat in the water. To his credit, his knowledge of the area can only be described as "freakishly good". He understands how tide movement patterns position fish in relation to the structures in the area, and how weather patterns do the same.

He has fished successfully in other places, surely, but he prefers his "spot" over all others. The joy he experiences while fishing apparently emanates from the comfort level he has with the place, not from a quest to learn new places or to catch bigger fish. If he can figure out what's biting in his home waters and catch some fish there, he remains perfectly content.

In order to catch those fish, Angler B mostly uses one type of lure. I will not state the type here, but I will say it is not a conventional floating plug. In the past, he did show a tendency toward tunnel vision with topwaters, but to his credit, he recognized that as an Achilles heel and changed his ways. He still, however, shows a marked tendency to fish with the same kind of lure almost all the time, regardless of wind speed, water temperature, water clarity or any other environmental factor.

In short, Angler B shows less versatility and creativity than Angler A. If forced, I'd say Angler A is the "better" fisherman. In fact, I've told him so. In response, he points out to me that his buddy has won more prize money and events than him. The fact started me to thinking. I wondered what might explain Angler B's slightly superior competitive performance.

First off, I thought the sample size might be too small to be useful. When I looked deeper into it and realized both these guys have been fishing with and against each other in tournaments for nearly two decades, I threw the idea out. The evidence comes from results earned in maybe one hundred events. That's a big enough sample size, I'd venture to say!

So what does explain the small, albeit perceptible difference between the success the two have known over the years when fishing competitively? One fact came immediately to mind as I pondered the question. Most of the tournaments they fish allow Angler B to access and fish his favorite spot. Some did not. I do not have all the data to make a more thorough comparison of events fished in their home waters and those fished outside those boundaries.

I know Angler A would more readily venture away from their favorite spot when fishing a tournament in which it lies within range. Angler B will almost always be found fishing there when he can. I conclude Angler B's confidence in the spot plays a role in his slightly superior performance.

This conclusion leads me to a broader-based, though similar, one. In the end, one of Angler B's defining traits shines through as the most important one for a lure fisherman. Angler B shows a gloriously high commitment to his choices. Commitment to the execution of a plan appears to be the most important contributor to success in the end.

As often happens, I fall back on an analogy to the game of golf when analyzing the detailed aspects of fishing with artificial lures. Great golfers consistently say the same things about what makes them superior to other players. All of them talk about being committed fully to the shot before drawing the club away from the ball.

Studying the swings of great players prove they get the job done in various ways; their methods of striking the ball show perhaps more differences than similarities, from the way they grip the club, to their alignment, swing paths, the rhythms in their swings and more. Furthermore, the strategies deployed by great players to win big events differ dramatically. Zach Johnson won The Masters without ever attempting to hit a par 5 in two shots, while Bubba Watson won the famous event twice with a strategy based on overpowering the same holes, going for them on his second shots time and time again.

In other words, Zach successfully deployed a conservative strategy while Bubba gambled often and won. In a way, this proves my point. Ultimately, commitment to the plan matters more than the specifics of the plan. Once a player decides on a strategy, he then works feverishly to commit to each and every shot fully while executing the strategy.

Successful anglers operate in much the same manner. Once a spot and lure are selected, the goal becomes to focus fully on presentation and other aspects of each and every cast. The full focus, or commitment, becomes the most important factor affecting the outcome.

Angler B, I believe, performs with a slightly higher success rate in tournaments because he better utilizes his personality to accentuate his fishing efforts. His stubborn insistence on doing things the same way in the same place repeatedly actually enhance his success rate, mostly because his feverish faith in his choices generates complete commitment to his plans. Confidence and commitment feed off each other and become the most important attributes underlying successful angling efforts.

While the previous statement rings true, it presents a dilemma to developing novice anglers. While commitment to a plan has paramount importance, commitment to all plans will not provide access to equally positive outcomes. In other words, anglers who make poor choices specifically in location, lure choice and even presentation style will not experience successful outcomes on a consistent basis.

Truthfully, my opinion about what makes a great angler has not changed, at least not in one significant way. While I acknowledge the importance of commitment to a plan, and the fact that said commitment trumps some other aspects of the sport, such as knowledge of various areas, rigging methods and versatility in the use of multiple plugs and presentations, I still contend these things generally help define the best anglers. The "ultimate" angler would display the positive aspects of both these guys. In other words, if Angler A could develop the same fanatical commitment to his plan each and every day, each and every cast, like Angler B, he'd improve. Similarly, if Angler B could upgrade his knowledge of multiple areas and methods without compromising his fabulous focus, he'd improve too. The hypothetical alpha angler relies on versatility and extensive knowledge when formulating a plan, then displays a nearly super-human level of focus once on the water attempting to execute the chosen plan.