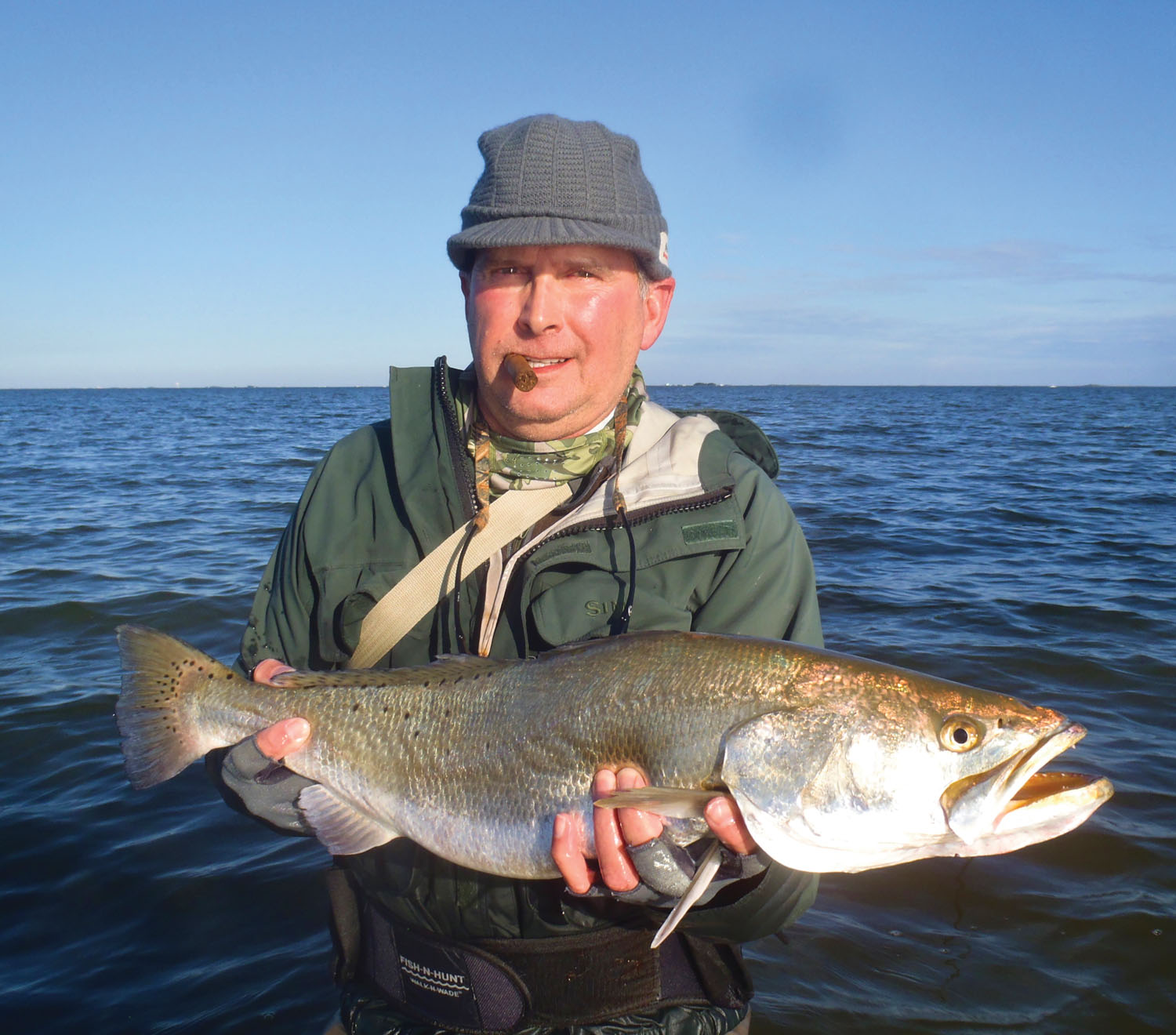 Scott Shillings showed patience and persistence around mullet jumping near a mat of rotting grass to land his personal best trout on a silver/chartreuse FatBoy.

Normally, when making important decisions on a charter, I mostly consider my own results, instead of those of the people with whom I'm fishing. Of course, if someone in the group catches a big trout before I do, I certainly won't ignore the significance of the event. Similarly, if someone discovers a particular lure, presentation or location which produces a desired result, I will take note and adjust our strategy accordingly. These events cause me to stay in a place longer, even if my own results don't match what I expect.

I constantly rely on five primary factors when deciding how long to stay in a spot before moving to a new location. Two of these relate to the place's history of production, the other three to present observations. I always think of long-term track record, recent track-record, observations indicating the presence of fish, the number of bites and the type and size of fish caught.

Obviously, the customers with me on a given occasion don't directly influence the two historical factors. But they can play a role in the other three, most often in the last two. But unless I know the clients have highly polished fish-catching skills, I rely strongly on my own ability to elicit strikes and catch fish when making the decision about staying or going. Right or wrong, I generally have more confidence in my ability to produce fish as compared to the anglers who pay me to take them fishing.

My heightened self-confidence springs from experience. I spend more time on the water fishing with lures than most of the anglers who come aboard my boat. Thousands of quality repetitions generally enhance one's presentation skills. Additionally, I have greater experience in drawing conclusions about which lures best match the moment and also what level of expectations we should have with regard to the ease of getting bites.

Maintaining a reasonable expectation about the ease of catching plays a critical role in angling consistency. Several variables affect this expectation, primarily the season, time of day, weather, type of spot chosen and type of fish targeted. These variables create a kind of "umbrella", or paradigm, which essentially envelopes the other five stated factors, molding them to meet the situation. Specifically, the observations indicating the presence of fish and expected number and frequency of bites gained will vary greatly, depending on the season and environmental variables in play.

So, if I go to a place with low expectations related to the ease of getting bites, I don't worry too much if and when it takes me a while to get one, and I don't worry at all if the customers struggle to get one. If the spot has a sterling long-term track record and has produced trophy trout recently for me, I won't need to get a bite quickly in order to remain confident, especially if I'm seeing plenty of evidence around me to indicate the presence of fish, like bait, mud stirs, swirls and wakes, anything which leads me to believe the fish I've caught recently likely remain within reach.

Sometimes, though, nature plays nasty tricks, rendering normal operating procedures obsolete. In these cases, observations don't match the situation, or expected outcomes don't match with observations. Either the indicators of the presence of fish don't appear as they should, or the number of bites elicited doesn't stack up, given the observed indicators. In the first case, a relatively short time usually elapses before I perceive the need to make a move. If all the bait and signs disappear from a recently productive spot, I won't waste much time and effort trying to squeeze lime juice out of a pine cone. The other situation proves more frustrating. When signs of life remain good, more time will elapse without bites before I decide to move. Eventually though, I will likely make a move.

At first, the need to move does not, in and of itself, create desperation, because it happens on a daily basis. When making a first move, I either look for a similar area close by, if conditions remain like those in which I've caught fish recently, or I try an entirely different type of spot, if conditions recently changed, rendering a pattern or place (or both) obsolete. Regardless of the type of move I make at first, desperate urgency plays no role in either.

But if the move to a second spot produces the same result as the original spot, meaning either the new place seems void of life, or the bites won't come despite ample evidence of fish, I begin to feel a higher sense of desperation when making the next move. I have recently developed a specific way of coping with this phenomenon, one which involves using all members of the group systematically, in attempt to gain the maximum amount of relevant information as quickly as possible. The elements of this strategy, of course, relate specifically to wading and targeting trophy speckled trout.

The plan serves as an attempt to avoid the worst-case scenario which can develop in such a situation, one in which the captain panics and runs around "like a chicken with its head cut off," searching frantically for signs of life, stopping briefly in random places, fishing without focused intensity and winding up smelling like a skunk. Anyone who's spent thousands of days on the water has done these things, whether they admit it or not. Some tend to do them more than others. A person who generally has low patience for a spot shows a higher tendency to fall into the trap. Others tend to stand still and "crash and burn" instead of running around willy-nilly.

Neither the headless chicken nor the smoldering snail can hope to compete with a focused, creative captain who deploys a specific scheme to cope with unexpectedly poor results. Such a skipper proceeds in a positive manner, following an effective design, one which stands a higher chance of working, because it facilitates the rapid collection of as much relevant data as possible. Because the strategy involves data collection, it works best when larger groups of anglers with better skills deploy it.

The plan's first critical component relates to the kinds of spots chosen for deployment. A useful place will have multiple types of terrain on the bay's bottom, and various depths of water within close range of each other. The site might have rocks, grass, flats and drop-offs in a bay like Baffin, whereas in a riverine estuary it might feature a reef lying between an open basin and a muddy cove.

In any case, the captain should choose an area with multiple types of cover and structure and send anglers to various parts of the spot with different instructions. Some should target shallower structures using lures best suited to those parts of the area, while others should probe deeper parts with appropriate plugs and presentations. The more different patterns the group can try quickly, the better the chances one or more members will discover something productive.

While trying to locate biting fish, the captain should monitor the activity of all anglers as closely as possible, so they must be close enough to see and/or hear. Once a productive pattern, depth, lure and/or presentation reveals itself, the captain can then attempt to get all members of the group to fish in the same manner. In some cases, doing so simply means making sure everyone becomes aware of the efficacy of a specific lure or presentation. Some scenarios involve pointing out where folks should move on foot and how to proceed in a new part of the area, while others dictate ferrying them around in the boat.

Ideally, one deployment of the type described above will result in the illumination of a productive pattern, but if not, time should not be wasted. The captain should round up the crew and move to another area with multiple types of cover and structure and depths and deploy the anglers again. It makes sense to change things up on a second move of this type, in terms of which anglers stay around shallow structures and which ones probe depths and edges. That way, the captain can optimize use of the strengths of all involved, as well as the potentially productive parts of all areas in the most thorough manner.

This need for a rapid-fire, broad-brushed attack on particular kinds of places arises most often in situations where signs seem conducive to catching, but the bites just don't come as easily as expected. This plan usually works best when navigating conditions allow for quickly moving around, and when lots of parts of the general area seem "fishable." In my experience, these scenarios occur in March on a regular basis. Late-winter/early-spring weather proves highly fickle, tending to confound the ease of catching fish. Successfully coping with this devious aspect of the fishing gods' whims dictates a thoughtful, creative and disciplined approach, one which ideally involves the efficient use of all hands on deck.