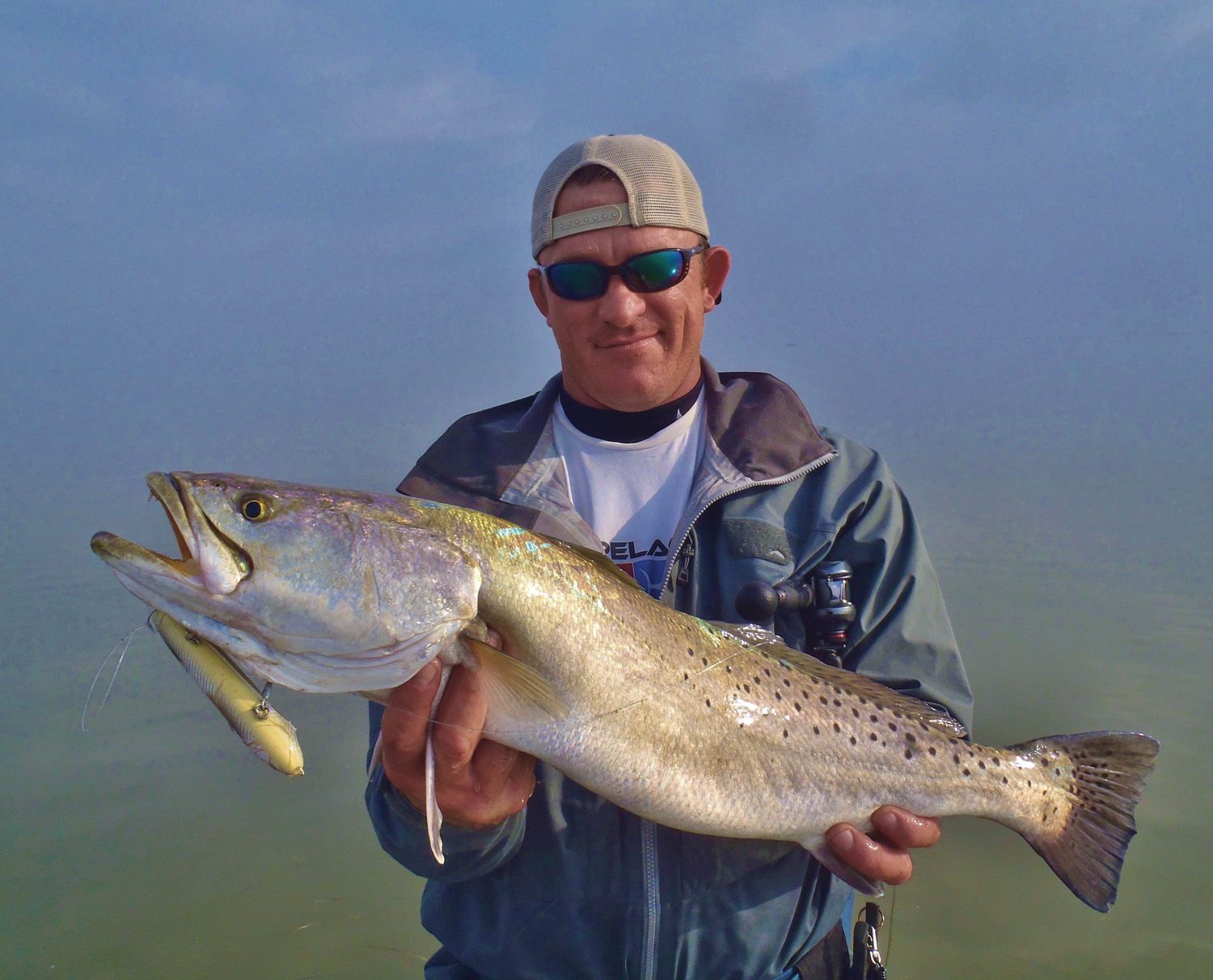 Randy Slocum might have caught this pretty trout on a smaller lure, but the fact is he DID catch it on a full-sized Super Spook, which imitates a fairly large mullet.

Many aspects of life dictate choices. Often, in order to achieve a specific, desired outcome, one must first clearly identify a goal, then make conscious decisions to enhance the potential for its accomplishment. For me, this truth reveals itself regularly in the two main outdoor activities for which I have ample passion: fishing for trophy speckled trout, and locating and identifying as many species of birds as possible.

Recently, when I made an excursion to the Rio Grande Valley in pursuit of a rare species of crow, events unfolded which emphasize the critical role choices can play in the success or failure of a sporting endeavor.Prior to my journey, reports online indicated the presence of two Tamaulipas Crows at the Brownsville Landfill. Scrutiny of the posts describing the sightings of the birds revealed they favored the area closest to the ongoing activity at the site.Like other winged creatures present at the trash pile, the pair of smart scavengers took advantage of the opportunity to find food in the mountain of fresh garbage tossed around by backhoe buckets.

I arrived at the redolent site and steered my truck toward the top of the mound of rubbish, where thousands of birds, mostly Laughing Gulls, hovered and squawked above the workers and their machinery. When I neared the action, I spied several cars parked beside the ruts in the path, then saw four people wearing drab clothes and carrying cameras and binoculars.Two of them stood behind tripods, taking pictures of some apparently important avian species in front of them.

I parked behind the other cars, got out with my gear and started toward the people I assumed had the crows in their sights. A third birder closer to where I parked gestured to me and pointed behind him, to where the main group of birds hovered over trucks dumping loads of refuse. “We've got 'em over here,” he said. I knew he meant the targeted crows. “Those people are shooting pictures of a Harris Hawk. Didn't want you to walk way over there and miss your chance at the T Crows.”

His act demonstrates how things generally work in the birding community. Folks make a concerted effort to help each other find birds, especially rare ones. In that basic way, birding and fishing differ dramatically. In this case, all birders present readily acknowledged the superior significance of the one species above all others.

Normally found in lowland habitats in eastern Mexico, populations of Tamaulipas Crows have declined precipitously over recent decades. Estimates indicate only a small number of nesting pairs remain, and they rarely venture north of the Rio Grande. Accordingly, many avid American birders relish any legitimate opportunity to see, identify and capture images of the species. This accounts for why nature lovers like us would spend time standing on a ginormous pile of garbage, swatting at flies and talking over noisy engines—we want to add the species to our Life Lists, knowing we may never have another chance.

So, when one kind birder directed me away from others on a quest to photograph a much more common species, I went to where he and his companion stood. “We had 'em right here on this fence for a while. They just flew up and went back over there to where the guys are working. They're mixed in with all the other birds right now, but they'll come back, I think,” he predicted. “They were seen on this fence several times yesterday too.”

Having accomplished their goal, the two said farewell and walked toward the parked cars while I thanked them for their help. Within no more than five minutes, I spied the two tiny crows flying among the gulls, grackles, vultures and other species. In flight, their silhouettes proved easy to recognize as members of the Corvid family. “Wow. They're so small,” I thought. With one goal down, I waited for the shiny, blue-black birds to return to perch on the fence, so I could capture their images with my camcorder.

For more than an hour, I waited. Other birders came and waited with me. We held on tightly to hope, but at some point, I began to wonder if I'd get a chance to shoot my footage. Then, I saw a Corvid pass overhead. “Is that the crow?” I asked a lady standing close by, pointing at the sky. “It seems way too big,” I noted, “but it's clearly a Corvid of some kind.”

“Looks like a Chihuahuan Raven,” she observed, raising her binoculars for a better look.“Quite a few of those around here.”

“Ahh. That makes sense,” I agreed, watching the bird land on the slope behind us. Then I temporarily lost track of why I'd come, and made a trek toward the raven. On the way, I spotted several more perched atop a fence. I'd seen the species before, but had only gotten some sorry video clips of them, so I realized the potential for upgrading my images. Eventually, I crept close to the glossy, large-billed birds, positioning the sun behind my back as best I could, working to capture some crisp clips.

After recording a few satisfying videos, I glanced back over at the fence the Tamaulipas Crows preferred, and saw both of them posing within feet of where I had stood waiting so long for their return! I suddenly felt supremely stupid, realizing I might have botched my chance at good images of the rare target species, while stalking a much more common one. Luckily, the two crows cooperated with my needs, lingering on the fence long enough for me to walk up and make several videos which clearly documented their features, down to the dots of sunlight gleaming in their eyes.

I tell this story of a birding triumph to illustrate a related point about fishing. Over time, I've found numerous parallels between birding and fishing, some more relevant than others. In this case, I've discovered something elusive, what I call an absolute truth, which applies to both avocations. Identifying and articulating such reliable tenets proves challenging. I'll dub this one Absolute Number Four, and state it in “bird terms” first—You won't find one bird while photographing another.

In “fishing terms”, it reads this way—You can't catch one fish while fighting another. This truth obviously bears significance to all anglers who seek to target and catch a particular species of fish. It can also ring meaningful to anglers who choose to target trophy specimens within a given species.

One can imagine simple scenarios which reveal the stern implications of this doctrine.Anglers hoping to pick a fight with a black marlin should not stop to jab at chicken dolphin every time they find a school under a piece of floating debris. Similarly, while poling a skiff across a flat flooded with shallow, clear water, an angler purely focused on catching a permit on fly should refuse to cast at any other species seen. Spending time, energy and effort casting at redfish, snook and other species will distract from the stated purpose, especially if one succeeds in hooking one of the other fish.

Many of us have personal experiences which illustrate what can happen in situations like these. While looking for one species, we sometimes see plenty of others. At first, we show patience and stick with the plan, ignoring opportunities to take shots at the distractions.Eventually, our desire to stretch the line trumps our focus, and we lower our standards, casting at some species with less immediate appeal. Often, quite predictably, after we've hooked the distracting specimen, we spy the object of our mission.

Who among us has not grown bored with a slow bite and cast a lure in front of a pack of cruising jack crevalle? Who can say they didn't realize the error of their way right when the lure plopped down, an instant before one of the hungry bruisers sucked it in and swam off?Once hooked, a twenty-pound jack proves difficult to land and release, especially on tackle better suited for speckled trout and redfish.

One thing becomes readily apparent to any grunting angler attempting to win a tug of war with a hefty jack—one cannot catch a trout while involved in such a wrestling match. Many of us regret losing our focus and consciously hooking a less-desired species after we choose to do so. Sometimes, events of the same kind play out with far less clarity, when anglers don't realize they're undermining their chances of achieving one lofty goal by taking a clear path to a lower one.

When fishing for trophy trout, astute anglers make choices which increase their odds for hooking and landing a relatively small number of big fish, often ignoring opportunities to catch a greater number of smaller specimens. For this reason, a dedicated trophy trout enthusiast will regularly race right past working birds, knowing most of the schoolies found under the flocks don't measure up to the sought standards. They'll also refuse to target fish in water too deep for wading, even after others report catching easy limits of “eaters” in such places.

In addition to making choices related to location of effort, they might stick with a limited selection of relatively large lures which mimic mullet, pinfish and shad, ignoring the ease of catching more fish with smaller ones which imitate shrimp, knowing mature trout generally prefer eating finfish over crustaceans. These same focused anglers might even adjust the timing of an outing to increase their odds of encountering the specimens they seek, heading out late in the afternoon and fishing through the gloamin', knowing large trout show nocturnal tendencies, especially in clear water, where the cover of darkness provides them the ripest opportunity for catching and consuming their prey.

Big trout dine on little trout when they can. “It's a trout eat trout world.” So, technically, I guess one can catch a trophy trout while reeling in a small trout, if the dink inadvertently becomes the “bait.” This does happen on rare occasions, and the fact undermines the absolute aspect of the truth inherent to this piece. But that's a technicality, in the end, one without much significance to a focused angler bent on achieving a specific goal. Like a determined birder elevating the significance of a rare crow above that of a more common raven, a dedicated trophy trout hunter turns away from lesser fish to increase the odds of encountering greater ones.