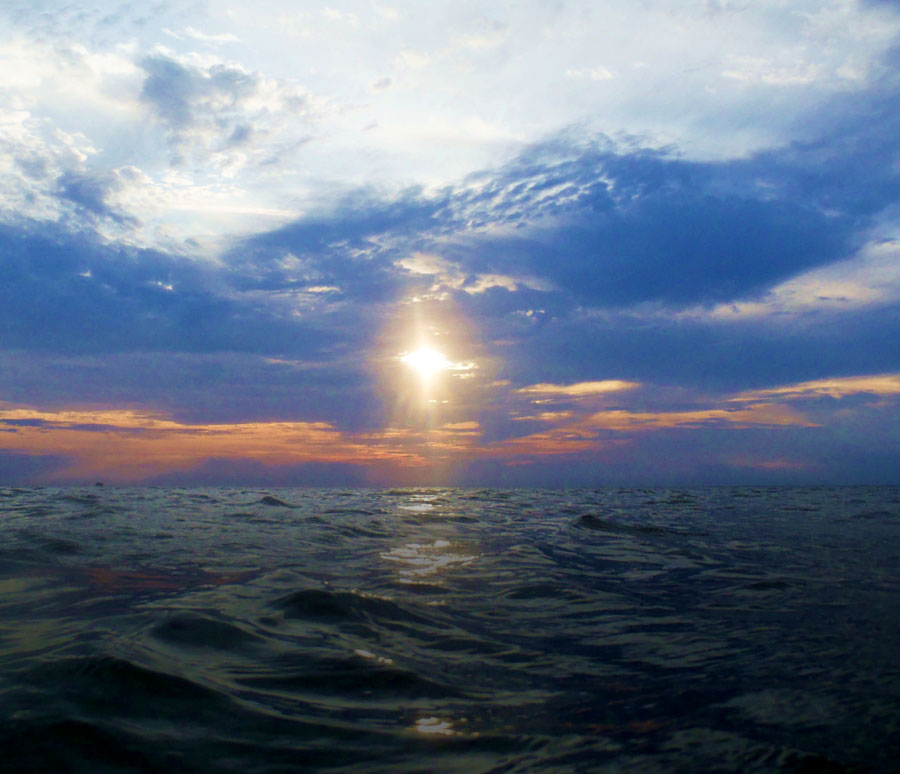 Particularly in the cooler half of the year, dramatic sessions are potentially possible in the gloaming. Warming bay waters often reach their highest temperatures after dusk, when fish activity sometimes climbs to a similar peak.

Many people prefer to go fishing in pretty weather, with light winds, moderate temperatures and relatively clear skies. Especially on a boat, the choice to make outings in stable weather is often consciously done in the interests of greater safety and better perceived opportunity to catch more fish.

Benign weather conditions definitely allow for more comfortable and pleasant excursions, and sometimes the catching is good when environmental factors are serene. On other occasions, harsher conditions can impact the potential for catching positively, if anglers adjust their strategies and methods appropriately. Various kinds of excessive or exaggerated aspects of the fishing situation necessitate modifications to basic routines, particularly when artificial lures are used exclusively.

Certainly, sizzling hot conditions dictate several tactical adjustments. When water temperatures exceed 85° or so, some facets of lure fishing become predictably easier. Because hot water speeds up the fishes' metabolism, they feed more frequently, so fewer lulls in the action can be expected.

Trout and redfish are easier to catch on topwaters and other plugs fished close to the surface and are more susceptible to faster retrieves in hot water. When actively feeding, they'll often strike lures whose heads move sharply from side to side, in a rhythmic fashion. When they become less aggressive in hot water, starting and stopping the lures becomes more effective, especially if speed bursts are incorporated between pauses.

Conversely, cold-stunned fish become lethargic, feeding less frequently and actively. When water temperatures dip down around 50° or lower, slower presentations made closer to the bottom work better. As in warmer water, active fish in cold water are willing to strike lures moving steadily, but less-aggressive ones often refuse to move and chase, striking only when a slow-moving plug pauses and drops within inches of their noses.

Temperature extremes impact optimal presentation speed; they also affect the depths at which most fish will be found. In the peak of summer, many trout and redfish spend much of their time in deep basins, preferring the comfort of cooler temperatures well below the surface. Similarly, fish in winter often seek safety and warmth on the bottom in channels and holes. In both seasons, fish will occasionally move much shallower.

In hot water, fish tend to move shallow to feed, doing so most readily in low light conditions during the night and early in the morning, when the shallows reach their coolest point. When temperatures are dangerously chilly, fish sometimes move shallow as a way of warming up, typically late in the afternoon and early in the evening. Thus, wadefishermen often find winter fishing easiest around dusk, while the daybreak bite is usually better in summer.

Regardless of when the fishing effort is made, catching fish in extremely shallow water necessitates careful strategies. Fish found in the shallows tend to be spooky, so employing stealth is critical; wading speed should be reduced to a crawl and boat noise must be minimized or eliminated. Silent, lightweight, buoyant lures enhance stealth in the shallows; effective choices on shin-deep flats include soft plastics rigged weightless, floating Corkies and conventional topwaters without rattles. Since they are covered by a thin sheet of water, fish in the shallows are easily made aware of even tiny, quiet lures cast near them; locating fish on skinny flats involves making lots of casts and covering water laterally.

On the other hand, catching fish in deep water involves more of a vertical component. Pulling fish from greater depths usually requires figuring out whether they are hugging the bottom or are suspended some distance off the bottom. If suspended, the strike zone will be in a layer of water slightly above them; the more aggressive the fish, the thicker the strike zone.

Consequently, active fish in water over six or seven feet deep can sometimes be coaxed into striking floating plugs, especially bulky, noisy ones. Less-active, suspended fish in deep water are best motivated to strike lures moving closer over their heads, somewhere in the middle of the water column. If they are sitting on the bottom, heavy lures which make contact with the bay floor work best, since they are easier to deploy at such depths and stay within reach of the fish for longer periods of time.

At all temperatures and depths, the strength of the wind will affect strategy, particularly if it's dead calm or blowing in excess of twenty knots. Calm winds generally increase the potential for catching by allowing anglers access to more types of areas, but making fish bite in such conditions isn't always easy. Moving water is a help to anglers fishing a dead-calm lull, so focusing the effort around a strong tide movement is wise, if such a strategy is possible.

In areas far removed from a tide source, other tactics will be required to generate strikes from lethargic fish in stagnant water. Slow presentations made with small, subtle, quiet lures generally work best when winds are light and the bays are quiet. Because calm conditions can make fish more spooky, long casts are often more effective. Making long casts with light lures is easier with spinning tackle than with conventional levelwind reels.

On the other hand, when flags are snapping, making long casts is easy, but effectively deploying lures can be difficult. Fighting the tendency to make all casts in a direct line downwind is helpful, and using lures which give off plenty of noise, flash and/or scent is preferable too, particularly if strong winds have mucked up the water clarity. Overall, presentations with more speed and greater variation in rhythm and intensity work better when it's windy. Frequently starting and stopping during the retrieves, varying the length of the pauses, while making plenty of noise overall, is usually the most productive plan in choppy, sloppy water.

Windy weather often causes the water to lose clarity. The primary effect turbid water has on fishing strategy relates to lure choice. Large, loud, smelly lures make more sense, as they are easier for fish to locate. Moving those lures vigorously is helpful too, especially if the mucky water is also hot. In cold, muddy water, the benefits of scent are enhanced, because the overall speed of the presentation will need to be reduced. Dangling scented soft plastics under a cork can be the best system of all in dirty, cold water, allowing one to make noisy presentations with smelly lures without bringing them in too fast.

Scented lures are less helpful and necessary when the water is clear, but catching fish in super clear water is not always easy. If the water is clear because it lacks the microorganisms which form the foundation of the food chain (as is typically the case in winter on the Upper Coast) catching fish in it will often be difficult or impossible, especially in the daytime. Many savvy Upper Coast anglers look for the dirtiest water they can find in winter, knowing it will hold more trout and redfish; others prefer to fish the clear water from late-evening into the night.

The potential for making a memorable catch in the gloaming is enhanced when cold, clear water has warmed all day under a post-front, cloudless sky. Additionally, when some other celestial event(s) such as a moonrise or moonset and/or an associated tide change coincide(s) with dusk, fish often feed voraciously. The action in such a situation frequently lingers into the dark of night.

Catching fish in ultra clear water is easier to do with natural-looking lures presented in ways which effectively mimic the organisms they represent. Lures like the DOA Shrimp, the pearl/black Fat Boy, MirrOlure MirrOminnows, baby trout topwaters and other plugs which closely resemble real fish and shrimp are good choices in clear water.

Employing erratic movements in the presentations is helpful; allowing predators to take a good look at lures in clear water is counterproductive, often causing them to follow but not strike. Reaction strikes are easier to elicit by starting and stopping and through speed bursts; for these reasons, rat-tailed soft plastics are often preferable over paddletails in ultra-clear water.

Catching fish in clear water is hardest to do when the sky is cloudless and a bright sun hangs directly overhead. In fact, bright skies can alter fishing strategy whatever the water clarity. Clear-blue skies dictate one thing most directly--lure color. Bright colors like chartreuse, pearl and pink work well under an azure canopy. Shiny offerings like chrome and silver do too. On the other hand, when cloudy, dark weather persists for days at a time, especially in winter, red, black, green and purple lures seem to attract the fish and trigger strikes more of the time.

Some of my personal-best catches were made under dreary skies in January, while raindrops drizzled down sideways, directed by a keen, cutting breeze. Fishing in nasty weather becomes blissful when bites come frequently, particularly when the feeding fish are trout of magnum proportions. Learning how to manipulate strategies to cope with extremes can make fishing in marginal conditions pleasantly productive. In fact, it might even change one's perception of "pretty weather."