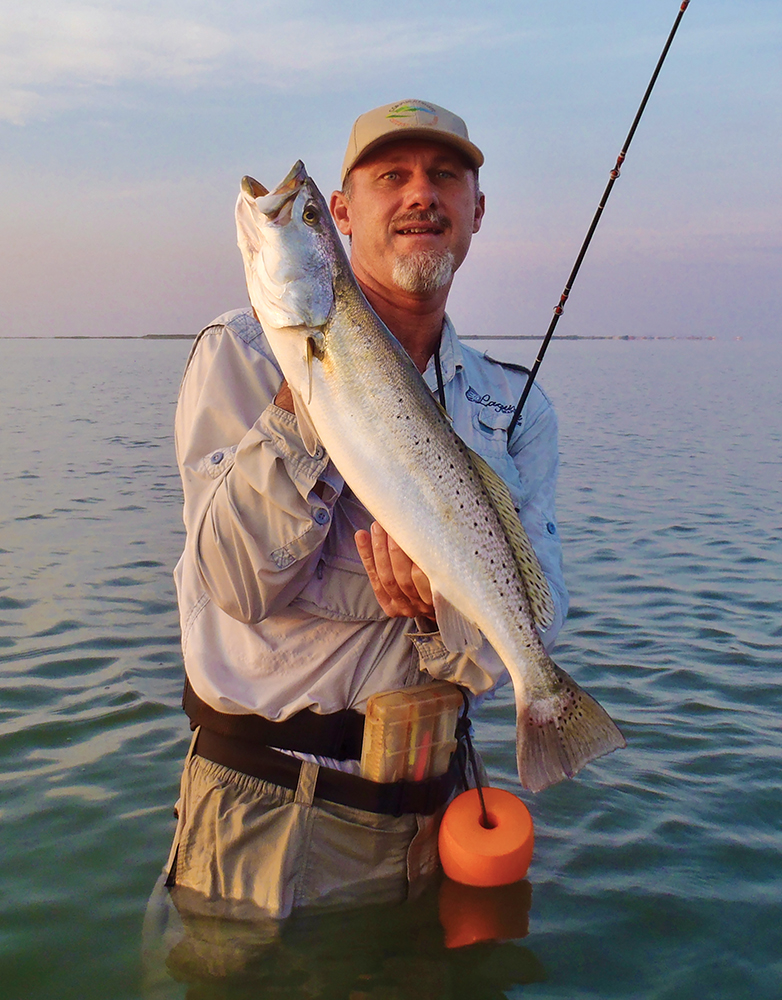 The captain caught this pretty, long trout during low light conditions on a hot July morning.

At the end of the spring and start of summer, while the month of June winds down, wise trout anglers adjust their strategies and the locations where they spend the majority of their time attempting to catch fish. During the mild months of the transitional season between winter and summer, we normally target specks in shallow areas holding copious amounts of forage species, often in places far removed from deep basins and channels. As the days become longer and hotter, most of us begin looking for fish around shallow structural elements lying closer to water of greater depth.

Part of the beauty of spring fishing results from the ability to trick spotted seatrout on a variety of lures in water barely deep enough to cover their black backs. Big trout hooked in shin-deep water usually thrash at the surface and/or leap free of the water entirely, providing visual thrills to accompany the tactile sensations they create while they pull against our weight. Few things provide greater satisfaction to a trout hunter than squaring off with monster trout in water so shallow we have difficulty landing them without dropping to our knees.

Normally, we locate specks in places like these by first finding the forage species on which the predators feed. This typically occurs when we see expansive rafts of large mullet numbering in the thousands. In many cases, once we start walking around among the mullet, we see numerous other species with them, sometimes including glass minnows, menhaden, ballyhoo, needlefish and pinfish. Most likely, the variety in the food sources available to the trout accounts for why we can regularly catch them on several different types of lures.

Over time, the efficacy of each of these lures varies, depending on the feeding mood of the fish and other environmental factors, meaning the amount of sunlight beaming from the sky and velocity of wind and associated wave action/water clarity.Weather elements do more to dictate lure choice and presentation than location.Windier days often improve the effectiveness of erratic presentation styles which include speed as a primary component, whereas calm days elevate the productivity of slower, steadier, more rhythmic presentations.

During the relatively mild months of spring, time of day influences the ability to catch trout less than in the harsher seasons preceding and following it. Productive trout anglers make a conscious decision to stay around concentrations of bait in some of the shallowest parts of the estuaries in which they fish, knowing they can urge strikes from the trout they seek any time of day.

Effectively targeting and catching trout in spring often requires anglers to cover lots of water in search of a relatively few bites, since the shallow flats preferred by the fish generally hold plenty of water of the same depth and with similar bottom features scattered around over long distances. Stealthy anglers making slow, steady marches through areas like these and making the longest casts possible usually prove most consistent in catching fat trout in skinny water.

When summer arrives, aspects of these truths change somewhat, starting with the basic move to locations lying in closer proximity to deeper water, in some places, water moved regularly by the eternally restless hands of the tide. In any estuary lying within a few miles of a strong tidal source, spoil banks and other shallow structural elements close to ship channels or the intracoastal waterway provide the right elements to hold trout throughout the hottest months.

The predictability of summer weather proves conducive to our efforts as lure chunkers. On a typical summer day, the late-night breeze dies down around the time the sun peeks over the eastern horizon, and a calm lull or light, westerly zephyr prevails for most of the morning.During the lull, conventional floating plugs worked with generic, rhythmic, medium-paced movements often urge aggressive strikes from speckled trout. On some days, especially the dead-calm ones, slow-sinking twitch baits like Paul Brown Fat Boys work better than topwaters, especially when worked at medium pace without too much spastic movement employed.

Light winds facilitate the observation of signs of activity in the water, due to the lack of confusing wave action on the bay's surface. Often, during the hot season, soon after daybreak, we observe concentrations of mullet and other bait species packed tightly together atop the shallowest portions of structural elements like sand bars, oyster reefs, rock formations and grassy humps lying adjacent to deep water. In these cases, tossing lures in the midst or along the fringes of the concentrations of nervous bait often produces steady hook ups.

Normally, as the sun climbs higher in the sky in the middle of a summer morning, onshore winds of medium speed come singing off the Gulf, changing the nature of the catching tune.Eventually, the light penetration and heat produced by the bright ball in the sky tend to send the predators toward the edges of the structural elements, close to where the deeper water provides cooling layers.

Catching the trout during these transitional times often requires a short shift in location, sometimes achieved by throwing lures along the edges of the shallowest parts of the structures, where bait presence becomes less obvious and prolific, sometimes requiring a short walk to slightly deeper areas close by. Along with the slight change in place, subtle alterations to lure choice and/or presentation also generally result in more consistent catching. On some days, switching from conventional topwaters to slow-sinking twitch baits will keep moving the predators' mouths, while on other days, changing the movement pattern of the floating plugs will achieve the same goal.

On many hot mornings, when onshore winds first stir wave action on the warming surface of a Texas bay, small topwaters worked erratically, with lots of starts and stops and variable speed, will urge violent strikes from trout moving from super shallow water into cooler depths for the heat of the day.Specifically, Super Spook Juniors and Baby Skitter Walks perform well in these cases, perhaps because their light weight and sleek design features facilitate fast presentations; they skim easily across the surface and dart around in spastic patterns when pulled forward quickly by rapid turns on the reel handle.

I like to execute what I call “speed bursts” with these lures by holding the rodtip in a fixed position and making six or seven fast turns with the reel handle. When the little plug stops after the surge, I generally allow it to come to a full rest for a couple seconds before walking it rhythmically out of the “hole” for a few strokes before pausing again. After two or three short sessions including several strokes of the rodtip, resulting in side to side movement in the head of the lure and the typical clicking sounds they produce, I like to repeat the speed burst and pause again.

Many of the strikes produced through such a presentation prove aggressive and impressive, often occurring upon the moment the lure stops at the end of a speed burst, or just as it resumes movement again after briefly bobbing atop the waves. On many summer mornings, I have no problem catching trout on top in these ways after the blow ups on slower, more typical presentations become almost impossible to induce.

On some occasions, fast, erratic presentations with topwaters continue to produce strikes from trout steadily into the middle of the day, as wind speeds ramp up and the sun hangs high overhead. More commonly, a switch to soft plastics on conventional jigheads works better.Throwing the worms around the edges where structural elements taper off into greater depths and short-hopping them off the bottom and up the slopes works well on a consistent basis during the hotter parts of a summer day.

Basically, a shift from spring to summer patterns means moving from expansive flats with relatively uniform, shallow depth to smaller-scale structural elements with more vertical depth components. In response to the presence of depth elements, the switch from spring to summer involves a conscious decision to adjust lure choice from top to bottom on an hourly basis, rather than throwing a smaller set of shallow-performing plugs all day. In terms of strategy, summer fishing encourages movement over short distances, with tight focus on casts made to specific parts of the structures targeted, while spring strategies usually involve making relatively long, slow-paced treks over longer distances, covering water of a constant depth.