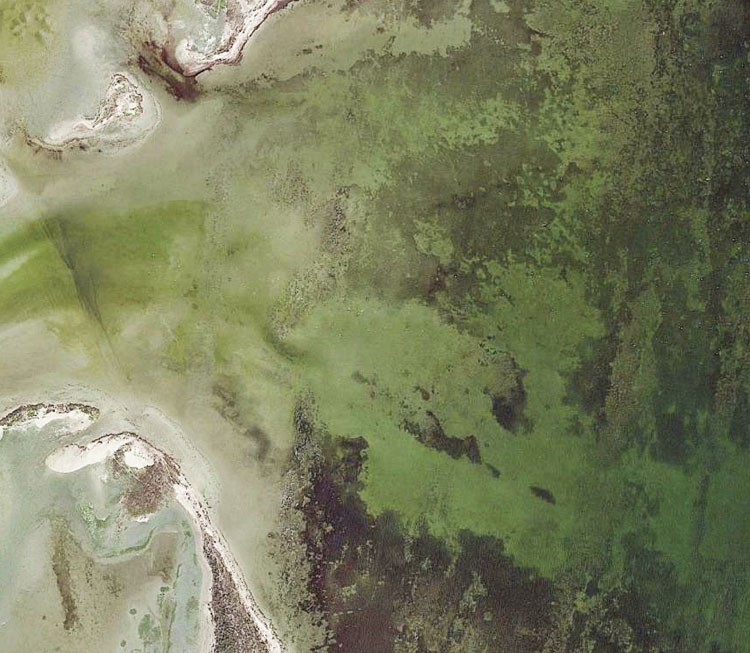 Studying the bottom features revealed on Google Earth images like this one of Rocky Slough can help anglers determine precise, effective ways to target fish in the documented area.

In April of 1998, I submitted my first article to Gene Baker, then owner of Gulf Coast Connections magazine. I remember pecking out words on a typewriter and folding a paper into an envelope, which I sent via snail-mail. Boy, times have changed! This year, my career as a columnist for this publication reached legal voting age.

Like people generally do, my writing skills have matured over time. As the calendar evolves, so do my perceptions of sports and the world, of all things. Regularly, I find myself rehashing old, familiar ideas in new ways, in attempt to acknowledge the effects of innovations in equipment, methods and technologies.

To honor of the maturation of my work, I'll offer three statements here. Among the most poignant words I've ever tapped out on the keys, these edicts remain significant to me. One identifies an important foundational element supporting success in the sport of inshore fishing, the second states an absolute truth related to the sustainability of the resource, and the last relates specifically to our spirit and to the purposes underlying the activity.

I stand behind the veracity of the first statement-- "the person with the most extensive knowledge of the physical features of the bay systems has the greatest chance at consistent productivity." This assertion appeared as part of a piece intended to identify the characteristics shared by the most productive inshore anglers. The best show the strongest ability to locate fish consistently, and their familiarity with the bay systems in which they work contributes mightily to the ability. To enhance their awareness of the intricacies of the bays, these anglers also recognize how various environmental elements affect all parts of the waterways.

Ironically, much of the profoundly critical knowledge reached the brains of these experts after passing through their feet. I've said it before and will type it again--wading allows for the most detailed appreciation of the anatomy of the bays, because walking around in the water facilitates the complete perception of an area, including the precise location of subtle depth changes and the type of bottom throughout the place. Google Earth images help modern anglers learn things, and experts take advantage of the eye in the sky, but no satellite image on a computer screen can replace a tactile connection with the face of the earth itself.

Memorizing a thorough and accurate template of the topography of the bays and how seasonal changes, weather elements and tide levels and cycles accentuate or degrade potential productivity in various areas allows top anglers to find fish more regularly than people who show a rudimentary grasp of these details. Fishing many hundreds or thousands of days, documenting the outcomes of their efforts either formally or informally, the masters of the sport compile an ample data base and catch more fish than others.

Because they potentially place the highest levels of stress on the resources, due to their consistent presence and extraordinary effectiveness, fishing guides and expert amateurs acquire a responsibility to act as role models and show other anglers the best ways of doing things. In the end, ensuring the resources' long-term sustainability proves more important than the size of the harvest on any given day.

As these concepts relate specifically to fishing for spotted seatrout, the second statement bears an especially high level of significance. I originally discovered it while working on a book titled Inshore Angler's Blueprint for Success. Searching for absolute truths related to fishing, I managed to articulate three, one of which reads this way--"a dead fish cannot be caught again."

Most coastal anglers, including those who target trout, want to take home some fish to eat. For many, cooking fresh fillets satisfies an urge and provides closure to an outing. While we quell our appetite for fish, we must also remain aware of the finality associated with the act of killing a fish. No sane, responsible individual would deny the legitimacy underlying the act of ingesting what has been harvested legally.

The state bears the ultimate responsibility to define the parameters which establish the legality of the harvest. I applaud Texas Parks and Wildlife's recent reduction of the daily bag limit on trout to five throughout most of the state. Given the increased amount of effective fishing pressure compared to what existed when the state created the previous limit of ten in 1984, the reduction seemed long overdue to many.

In addition to lowering the limit, I'd like to see the agency eliminate the one-over-25 rule, which allows each licensed angler to legally kill and keep one trout over twenty five inches every day. Such a law fails to fully acknowledge the critical role large trout play in sustaining the resource, one TPWD states explicitly on their own website.

"A female spotted seatrout may spawn several times during the season. Younger females may release 100,000 eggs and older, larger females may release a million." I've copied and pasted the preceding statement straight off the TPWD website. It directly reveals the reason we should release all (or at least almost all) the big trout we catch.

Speckled trout "females are larger than males, and they also attain a greater maximum age and size. They may live as long as 18 years, but individuals over five years of age are rare." (Atlantic States Marine Fisheries Commission website) The last part of this statement rings loudest to me.

The value of older, female trout resides not only in their tremendous fertility, but also in the enjoyment they provide to the anglers who catch them. Releasing jumbo trout enhances the potential of the fishery in two ways, by allowing the old fish to spawn again and providing excitement to people who catch them again.

To assist in the endeavor, CCA should take a public stand against killing giant trout, and stop using weight to decide the winner of a tournament like the S.T.A.R.. Doing so sends the wrong message to the public and plays a role in reducing the number of big fish we have a chance to catch. This act diminishes the quality of the fishery, a consequence contrary to any conservative mission. We all know catching is more fun than fishing, and many of us believe catching big fish is more fun than catching little fish.

Coastal anglers don't unanimously agree about everything, but we all share common traits and characteristics. I touched on one of these when I generated the last of the three statements which serve as cornerstones for this piece. I placed it originally in a reflective ramble created for the magazine called "Dunebucks and Butterflies."

I intended to examine the deep sources underlying our motivation to go fishing and to pay homage to some of the profound feelings and magical things we experience and witness when we leave our everyday lives behind and head out into the wild. Significantly, this statement found a home near the center of the piece--"we fish to keep our souls alive."

Certainly, we do not fish simply to keep our bodies alive; coastal fishing cannot cost-effectively sustain us physically. For all of us, the act of fishing fuels more than just our bodies; it nourishes and replenishes our souls. Eventually, the purpose of fishing proves more meaningful than a mere meat haul, and even exceeds a noble attempt to stay in touch with nature.

We do fish to maintain contact with the natural world, to remain connected with our roots as hunter-gatherers. Somewhere inside us resides a deep-seated need to learn skills which superficially serve to sustain us. Instinctively, we harbor a desire to do things which provide sustenance, in addition to more subtle forms of satisfaction.

When we wet a line, we hone a connection back to a simpler time, linking ourselves literally and figuratively with something ancient, both externally and internally. The water and organisms in it precede us, our connection with it and them sustains us, and we feel these things deeply. For many of us, these feelings generate a strong urge to protect and preserve the creatures and habitats which draw us outdoors.

Consequently, we face a constant quandary, wishing to participate in time-honored rituals which involve harvesting and eating what we catch while also acknowledging the need to preserve the resource responsibly. This conundrum affects the lives of fishing guides most profoundly. We must concurrently provide fish for our customers, while serving as role models to explain why killing all the fish cannot be a good thing.

My customers regularly tell me, "We don't need to keep fish today. We've already got a freezer full of fillets." I know they mean well when they say these things, and many of them will make good use of the fish they've chosen to keep and freeze. But across this wide state, under the figurative light of a single star, bags of frozen fillets go to waste as I type this, and that's a travesty.

As youngsters, we all learned (or should have learned) a valuable sporting ethic–you must eat what you choose to kill. Allowing fillets to spoil in a freezer obscenely insults this important mantra. Disrespecting ethical standards damages the soul eventually. Within us, the soul provides the battleground for a war between good and evil. A weakened soul allows dark forces to gain the upper hand in this eternal conflict.

Essentially, the allure of fishing resides in the way it confronts us with a moral dilemma. When we succeed in catching a fish, we must decide its fate, measuring its importance against our own. Doing so simultaneously bends us back toward our roots, while potentially illuminating a path to enlightenment and forward-gazing sensitivity.

Because we live in a world dominated by technology and digital media, we sometimes feel out of touch with the tactile, physical aspects of our world, things which more directly and profoundly influenced human behavior for eons. In days long gone, people didn't think much about conservation or sporting ethics, but in our modern world, we must consider these things when we choose to hunt or fish.

Anglers who become most educated about the physical aspects of the earth show the greatest potential for success and celebrity. They also shoulder the heaviest burden to protect the heritage and the resources, so future generations can remain cognizant of the ways of our ancestors and the world they once knew, and so they will have fish to catch and eat.