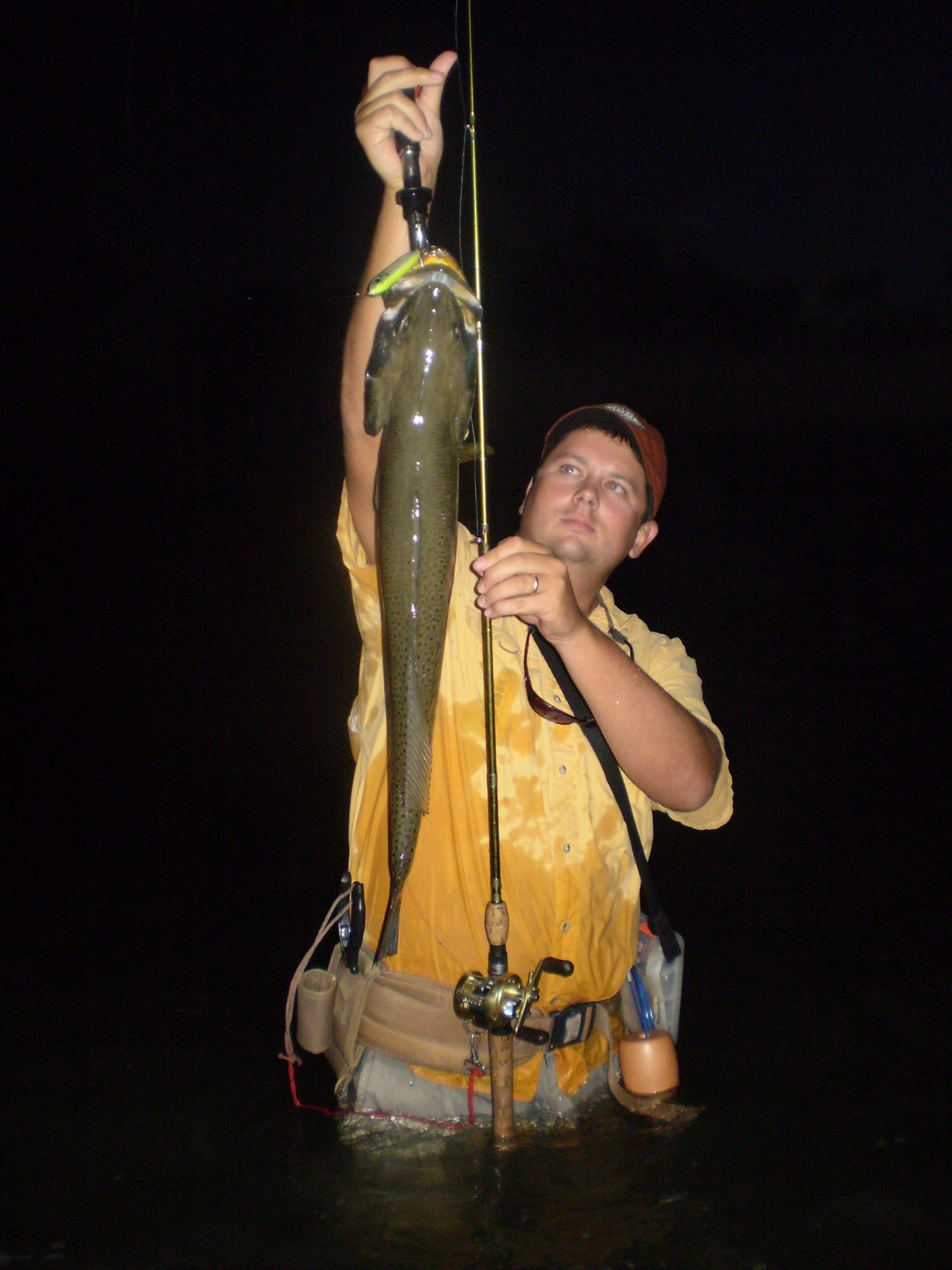 As mentioned in the DVD, the crack of dawn is one of the best times to catch big trout, like the long one Jason King fooled on his Spook Jr. in August.

I recently completed production of a DVD intended for people who love to fish for trophy speckled trout with artificial lures. Advanced Trophy Trout Tactics is largely instructional, though a few segments are included primarily for entertainment purposes.

Some clips were shot inside my home on North Padre Island, some on the water and others are slide shows compiled of photos. I was able to complete the project with the help of my friend Marina Mosqueda and fellow big-trout guide Jesse Arsola.

When attempting to capture images on video, it's important to have a production plan, but it's also vital to seize upon opportunities that present themselves unexpectedly, then use the acquired footage to make relevant instructional points. Both Jesse and Marina helped me in that endeavor.

In the end, we came up with some entertaining and (I hope) enlightening scenes for the viewer. The DVD includes ten chapters. One gives background on my fishing career. Another lists the four attributes common to trophy trout experts. A third makes a point related to the importance of using available signs while fishing.

The longest is devoted to the day Jesse and I spent in production on the water; it features segments on Corky (twitchbait) and topwater techniques. These how-to segments begin at the end, with images of the lures moving in the water, then work backwards through detailed analyses of how to impart action to the lures, eventually to close-ups of the hands manipulating the rod and reel.

Similarly, there's a section on using soft plastics to catch big trout. Also, I've invented a chapter which analyzes four charts to help clarify some of the concepts and theories I use to choose lures. One chart illustrates how environmental conditions affect lure choice; another relates the choice to the biting mood of the fish.

A third graphically depicts the way my preference for plugs generally changes through the year and the last provides a specific plan to use throughout a fishing day in each of the four seasons.

In another segment, I list and describe some of the types of places where trophy trout can be found in each of the seasons. All of these segments, with the exception of the background chapter, are intended to help the viewer become more consistently productive in enticing big trout into biting. The oral instruction I give is enhanced through the inclusion of pictorial evidence, charts and graphs and also by the text scrolling across the screen.

Some of the concepts are more complex than others, and the DVD is offered with the genuine hope that it will benefit the beginner who's just been bitten by the big trout bug, as well as clarify concepts for those more accomplished at the sport and provide food for thought to anglers who might have ideas for a DVD of their own.

I resurrect an old "friend" in the DVD. The Phantom is a character I created for an article in this magazine years ago, and he also "appeared" in my first book, Tricking Texas Trout, a piece which shares significant structural similarities with the DVD. In the end, I believe the DVD is more focused on advanced techniques specifically related to catching trophy fish.

As a part of my alter ego, The Phantom makes three contributions, all of which are stylized to look like old movies. Since the character basically serves as an archetypal old salt, he's there mostly to entertain and pay respects to those who laid the foundation for the game we play. In his words are imbedded lessons for viewers who listen keenly.

In one segment, the old boy says:

"So, not long ago, I go fishing with this kid who's the son of an old buddy of mine. I say kid; he's maybe twenty five or so. My friend tells me he's had success in a few of the tournaments and has a real passion for the big trout game.

I wasn't leery of him really, but I will admit I wasn't thrilled to go. Couldn't say no though; the kid had heard of me and wanted us to fish together. I took him up on his offer so his dad wouldn't be offended.

Of course, we go in his boat and fish his spots, wadin' 'em all. I'm either somewhat familiar or very familiar with every place he stops, but I don't mention it. The bite's slow, and I notice right off that he's what I call a greyhound. By that I mean he races through the water too fast and doesn't thoroughly cover what's within reach.

At about the third place we get out to fish, I see signs and know fish are holding in a small set of potholes near some rocks. While we ease over there, I make a few comments trying to get him to slow down and be patient. By that time, I'm convinced that if I don't do something to stop it, he'll stomp around in the fish before we can catch 'em.

Not long after we start throwing into the sweet spot, he gets this big blowup on his topwater. We hear a loud cupping sound and the foam flies. He hollers a cuss word and throws his arms up, doesn't even make a real effort to get the fish to come back.

A couple minutes later, I catch a trout about twenty five inches on my Fat Boy. While I have it in my hand, I turn to him and say, 'Ain't no trophy, but it's a nice fish.' Mostly, I'm hoping that catching the fish will slow him down at least a little.

But no! He's still moving when he turns to me and blurts out, 'Yeah right. That fish I missed was a monster!' With a cocky look on his face, he points at my fish and says in this weird voice, 'I could catch a trout bigger than that in my sleep, if I slept.' Then he chuckles, tells me he's kidding, that he's making fun of some guy in a commercial who used to star in a space ship movie or something.

Anyway, it ain't long before he's wandered way off, in search of a pot of gold at the end of his imaginary rainbow. Within an hour, he's just a spot sliding along the horizon.

While he's shuffling around in search of Katmandu or whatever, I catch a second trout about thirty one inches out of those potholes.

Heh, heh, heh! Never even moved from where we got the other two bites. She wasn't all that fat, weighed just over nine pounds, but I admit I cracked a pretty big smile when I let her go.

I never mentioned that trout to the kid after he made a long circle back to the boat and picked me up. Some things a man has to learn for himself."

Other things, I believe, can be taught. To watch a preview of Advanced Trophy Trout Tactics, and/or place an order for your own copy, visit www.fishbaffinbay.com.