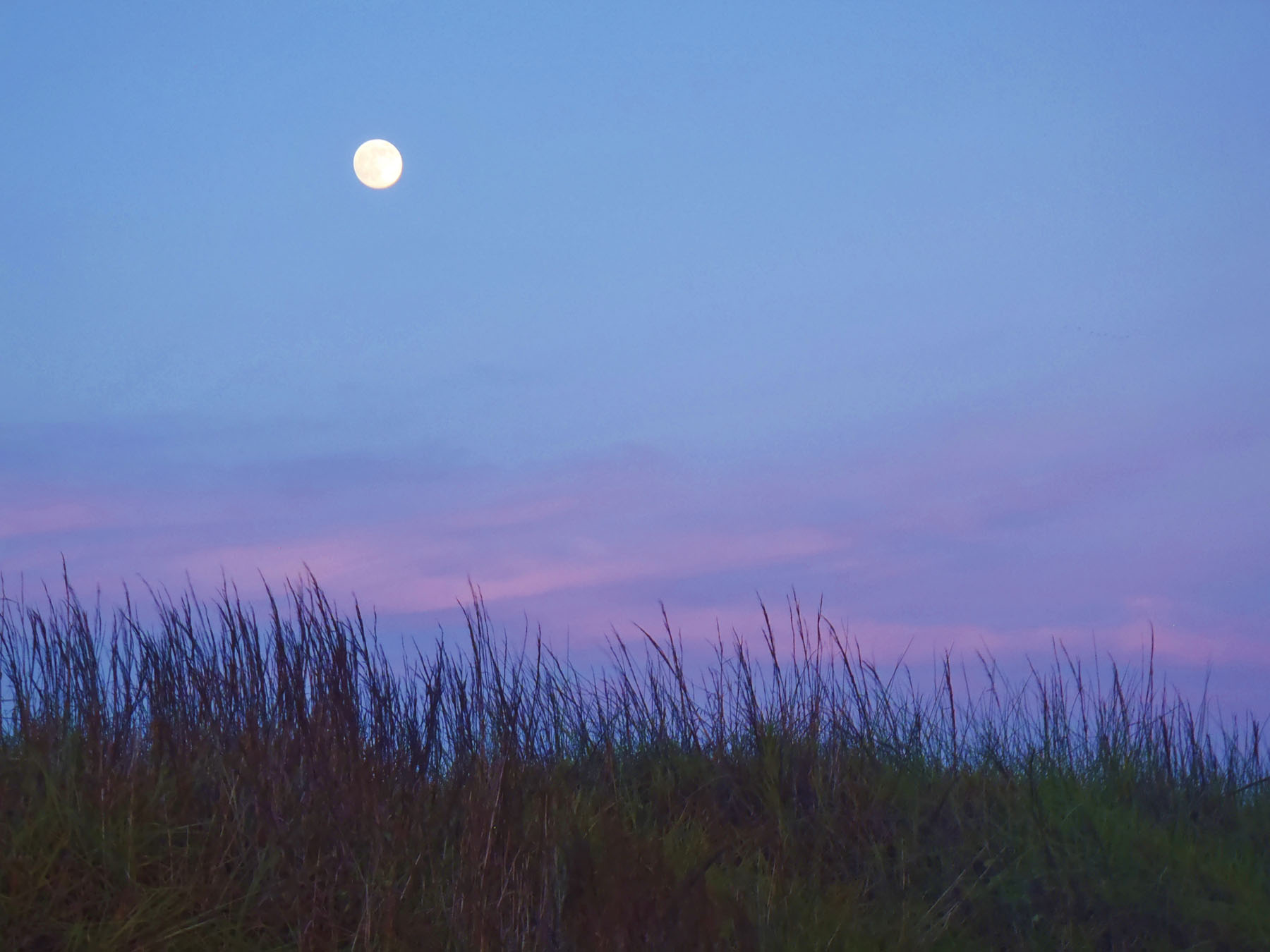 The wan light of the moon silvers the sea, providing a guiding light.
In a modern world molded, fueled and driven by technology, complete with the internet, social media and radio talk shows, some anglers become well-known, acquiring fans and followers. I could easily throw out a list of names almost everyone reading this magazine would recognize. The most studious might even know where the salty stars fish, what kinds of boats they run, what lures they like to throw and the species of fish they prefer to target.

These fishing celebrities act as leaders, spreading their mantras on a daily basis to clients and friends, even to strangers listening to the radio and reading the websites and magazines. For the most part, fishing pros and experts share the same kind of basic personality, displaying the following traits: confidence, independence and faith in their beliefs. Some come across notoriously as "know it alls." I might be accused of such a thing myself!

But this piece isn't about me, or any of the high-profile anglers we all know. It's about another guy, one most of us don't know, though we realize he's out there, and we suspect we probably cross paths with him from time to time. I base the description of this mysterious character on one I stole from a cartoon I watched decades ago.

Speed Racer detailed the exploits of a young race-car-driving hero. The title character's long-lost older brother Rex (Racer X) drove the Number 9 car, and many considered him a superior driver to Speed. Racer X had a falling out with their father Pops Racer over a wreck, and became the black sheep of the family.

Consistently, he preferred to stay away from the inquiring eyes of others, rambling off into the haze or over the hills after screeching in to save his little brother from those who tried to do him harm. At least that's the way I remember the show. My fictitious Angler X resembles Racer X because he consciously works to avoid the long loops cast by the fishing network. He operates in secret, like a stealth bomber or submarine, unseen on the network's radar screen.

The hull of his aging boat bears the logo of an established brand. Built to cut through rough waters while leaving the captain dry, the sturdy craft glides slowly over the waves; the man at the helm does not hurry to any particular fishing destination. Old-school by nature, he plods purposefully along, scanning the waters around him with discerning eyes, never looking for anything in particular, but seeing all relevant things.

With an ample deck, the venerable, yet clean craft provides space for him to lie down and rest for a while without returning to shore. During pleasant weather, he likes to fish through the night, sliding silently through the shallows for hours, shrouded under a black sky, sprinkled with twinkling stars. The wan moon silvers the surface of the bay when it rises, providing a guiding light. When the bite dies, astute Angler X sometimes snaps a tarp over the bow of his boat and crawls inside to snooze, while waves slapping gently on the bobbing hull play a lullaby.

He knows the bays he frequents as well as he knows the look on his trusted Lab's face, but he generally shies away from popular fishing holes frequented by weekenders and guides. Instead, he prefers to stay in off-the-path places, many of which lie far from the dock, but some of which sit close under the noses of a crowd of anglers who have seemingly become obsessed with traveling farther and farther from whatever boat ramp they use, mostly "because they can", not because they know they will find more and bigger fish at the end of the line.

On some days, Angler X winds up poling his shallow-drafting skiff through long expanses of grassy flats laden with shiny sand potholes, in search of monster trout and redfish. Normally, he waits until he spies the right fish before he makes a cast, but not always. If conditions don't favor such a method, he will change his tactics accordingly. He does not force his ways on Mother Nature; he attempts to marry his plans to her fickle moods.

He knows exactly where, when and how to use each of the tools in his arsenal. His modest quiver stays full of the right stuff. Like most old salts, he trusts and uses only a few lures, changing them infrequently. Some of the plugs, he made with his own hands; to all of them, he's added some kind of personal touch, like dabs of colored dye, upgraded hooks, split rings and deer-hair trailers. He does not try every new thing that comes down the pike, relying instead on the same offerings he's carried and used for years, which have proven themselves effective time and time again.

Long before the Twin Towers tragically fell, before global warming became big news and sargassum weed spread far from its namesake sea and covered our local beaches, he began perfecting his craft. Over the decades, he's caught his share of monster trout, plenty of double-digit trophies, though he doesn't know the exact number. Normally, he won't even pause to measure the precise dimensions of the fish he catches, preferring instead to raise them quickly and admire them, then release them without stamping the memory indelibly with numbers. To quantify every catch brings the modern world of man into something ancient and cerebral, and he finds such things obtrusive, even obscene.

Angler X can't be called a Trout Snob, since he celebrates catching spot-tails too, especially when they blow up on floating plugs and throw foam into the sky, reminding him of frothy suds erupting from an uncorked champagne bottle. Naturally, he remains silent, fighting all fish he hooks deliberately and steadily, never rushing things or losing his composure. Like a gun-fighter or maverick from the Old West, he cloaks his emotions beneath a stoic veneer.

No doubt, this old cowboy angler is someone's brother; in fact, he is a brother to all who love the salt. A celebrity he is not. He'd rather disappear like the bubble trail behind his boat than appear at a fishing show or captain's meeting. He firmly believes competition and fishing don't mix. For him, winning in fishing means proving the truth or value of something suspected, always by catching a fish. What he learns, he shares with a select few friends; what he catches, he either releases or discreetly cleans, away from curious, wondering eyes.

Celebrities, he believes, should stay on the red carpets, in places like Tinsel Town and the Big Apple, where they belong. A throwback to the days before GPS, Google Earth and Hashtags, Angler X has no Twitter handle, Facebook profile or 2Cool username. He has never Liked someone's post or uploaded pictures onto a wall. In fact, he still carries a flip-phone. He could probably send a text to people on his contact list, but the few friends and family members found there mostly wait until they get home and talk to each other directly.

He shares little in common with some of the friendly folks I met in the Great Northwest, in Puget Sound, where residents traditionally practice what they call the "Lopez Wave" to acknowledge everyone they pass on the highway, similar to the way Aggies in College Station shout "Howdy" to their brethren, and the boaters on waterways in the Lone Star State raise their hands from the wheels of their craft to acknowledge others passing by. Old Angler X feels no need to participate in rituals like these, to ceremoniously address strangers he encounters on his forays; he loathes disingenuous things, done merely for the sake of following a social code and showing loyalty to a group. Like a thoroughbred wearing blinders, he stays in his own narrow lane.

Our independent fisherman fits into no culture or community, except the untethered one comprised of like-minded anglers who stay away from others, doing their own thing. When asked a question, he offers cryptic, short, straight answers, never elaborating on concepts which might betray any of his secrets. He does not care to educate the masses, though he harbors no ill will toward his fellow man.

If I could, I'd tell you he lives in a cave and wears a cape, but to do so would be fake. He more closely resembles Clark Kent than Super Man; when out of his boat and his element, he adjusts his demeanor as a means of survival, so he can finance the excursions which sustain his alter ego.

He sees himself not as someone who plays a game with the fish, but as one who tries to find the ultimate expert angler within himself. While taking part in his solitary pursuit, he relishes the escape it provides from everyday life. The adulation of others adds no fuel to his quest for self-actualization; he prefers a higher form of self-evaluation, one with standards he set.

Though his skills place him in an elite class, Angler X finds no need to prove himself in a public arena. Racer X could have won many of the races in which he appeared with his younger brother, but he always deferred and finished second, so Speed could stand on the podium at the center of attention. Rex shirked the glare of the bright lights, lingering on the periphery, content in his own private world. Similarly, Angler X could create plenty of noise in the fishing community, but he prefers obscurity, shadows and silence.